The late Harry Bertoia is most famous for the iconic chairs he designed in the 1950s, which are now coveted by collectors of mid-century modern furniture.

But that was only one part of his career. Bertoia was also a renowned sculptor. He spent the final decades of his life creating works that make sound. Now those pieces are getting a fresh appreciation with an upcoming museum exhibition in New York, and the release of Bertoia's personal recordings in an 11-CD collection called Sonambient: Recordings of Harry Bertoia. 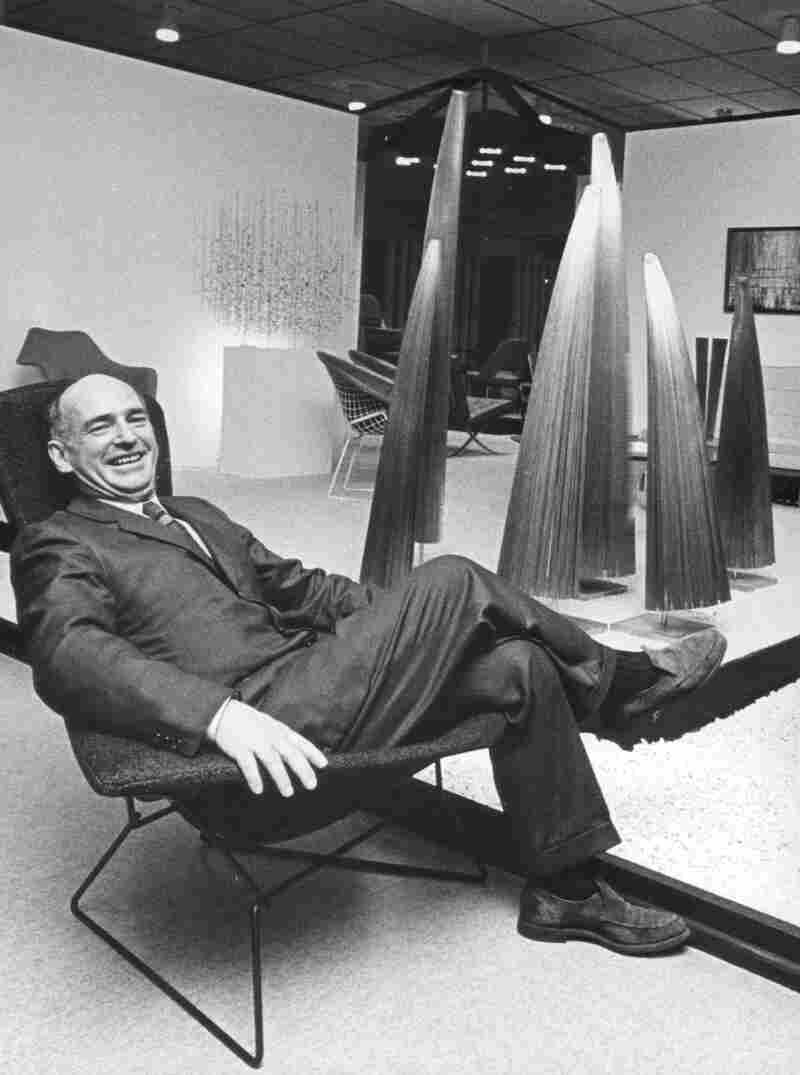 Bertoia was born in Italy in 1915 and moved to Michigan as a teenager. He's famous for the chairs he designed, but his real love was sculpture. Bill Johnson/Denver Post via Getty Images hide caption 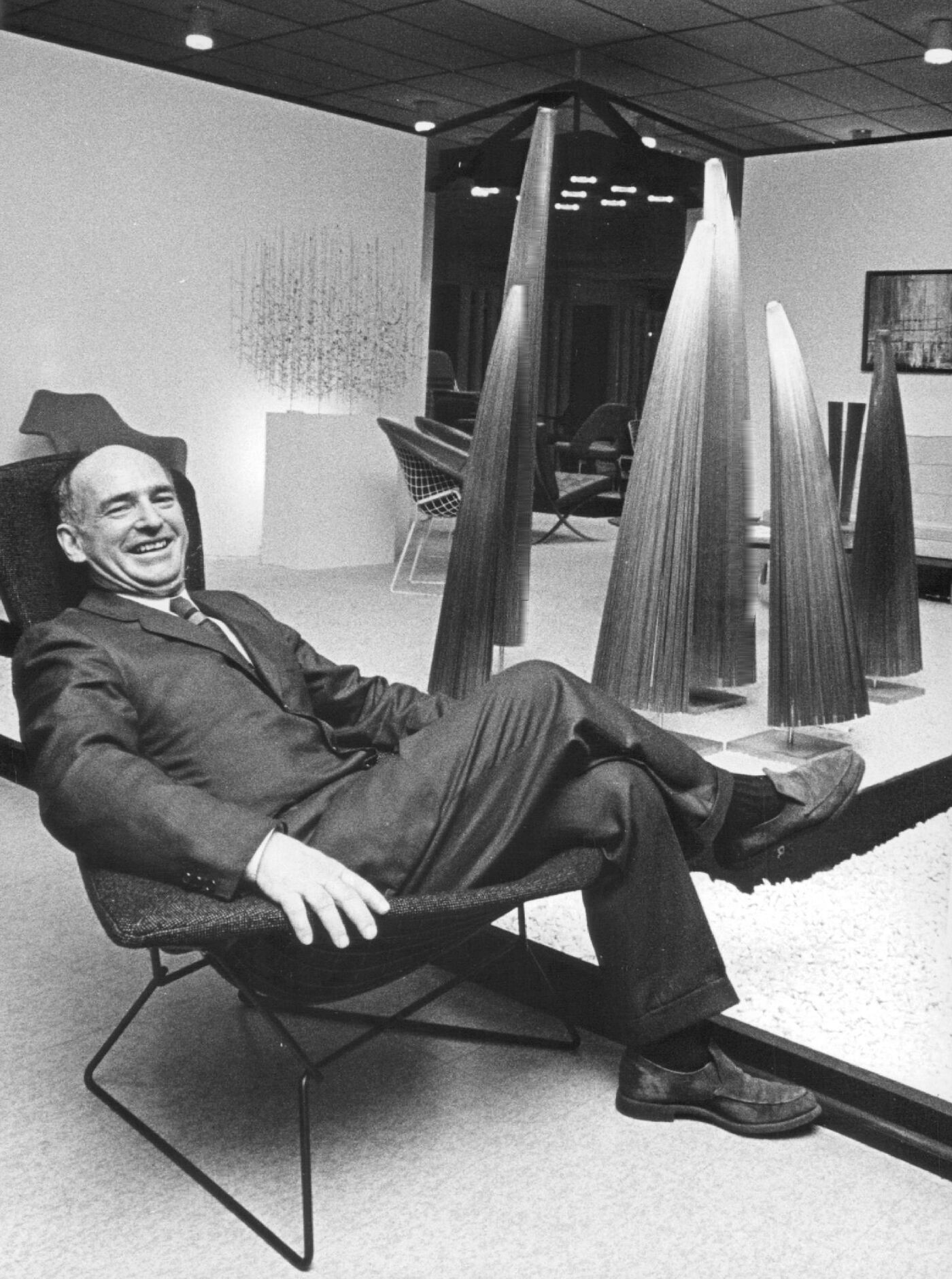 Bertoia was born in Italy in 1915 and moved to Michigan as a teenager. He's famous for the chairs he designed, but his real love was sculpture.

Bertoia's recording studio was an old wooden barn on his property in eastern Pennsylvania. It looks unremarkable from the outside. But when you step inside, it's equal parts art gallery and sanctuary.

"It was almost church-like, very private, almost sacred to enter to hear these sounds," says Val Bertoia, Harry's son. Val worked as his father's assistant, and helped build some of the sculptures that are still carefully arranged around the renovated barn.

Bertoia points to a sculpture that looks a cluster of thin metal rods, dozens of them, with small weights on top. They look like metallic cattails swaying in a breeze. "This one I think is, in my own opinion, one of Harry's very best tones or tonal qualities in a sound piece," he says.

To play the sculpture, Bertoia brings the weights together gently. There's a loud ringing sound, like a bell, then a gradual decay as the wire rods continue to move on their own. More than 90 of these sculptures are arranged throughout the barn. Bertoia coined the term "sonambient" to describe them.

"Some of the sounds sound like bit like church bells way off in the distance," says Beverly Twitchell, a former art history professor at Marshall University who befriended Harry Bertoia in the 1970s.

"Some sound beautiful and rich and full. Others are a little disturbing," says Twitchell. "Some of the sounds are kind of cold and icy. And others seem almost golden somehow." 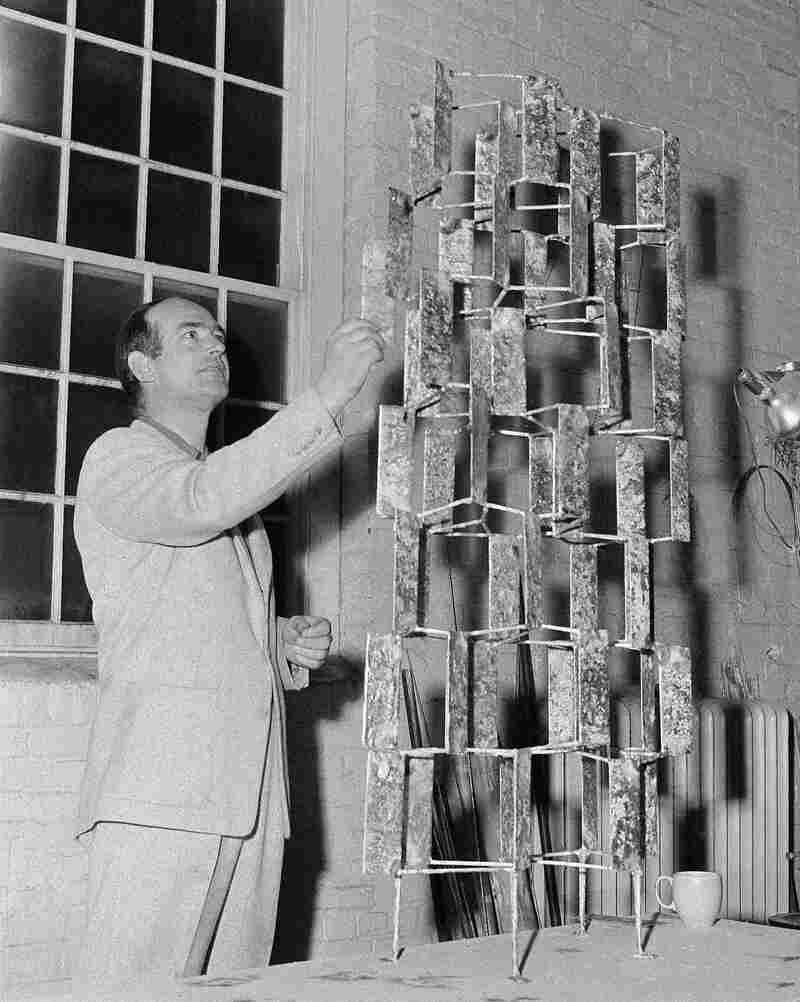 Bertoia looks at one of his art pieces at his studio in Barto, Pa., in May 1956. WFA/AP hide caption 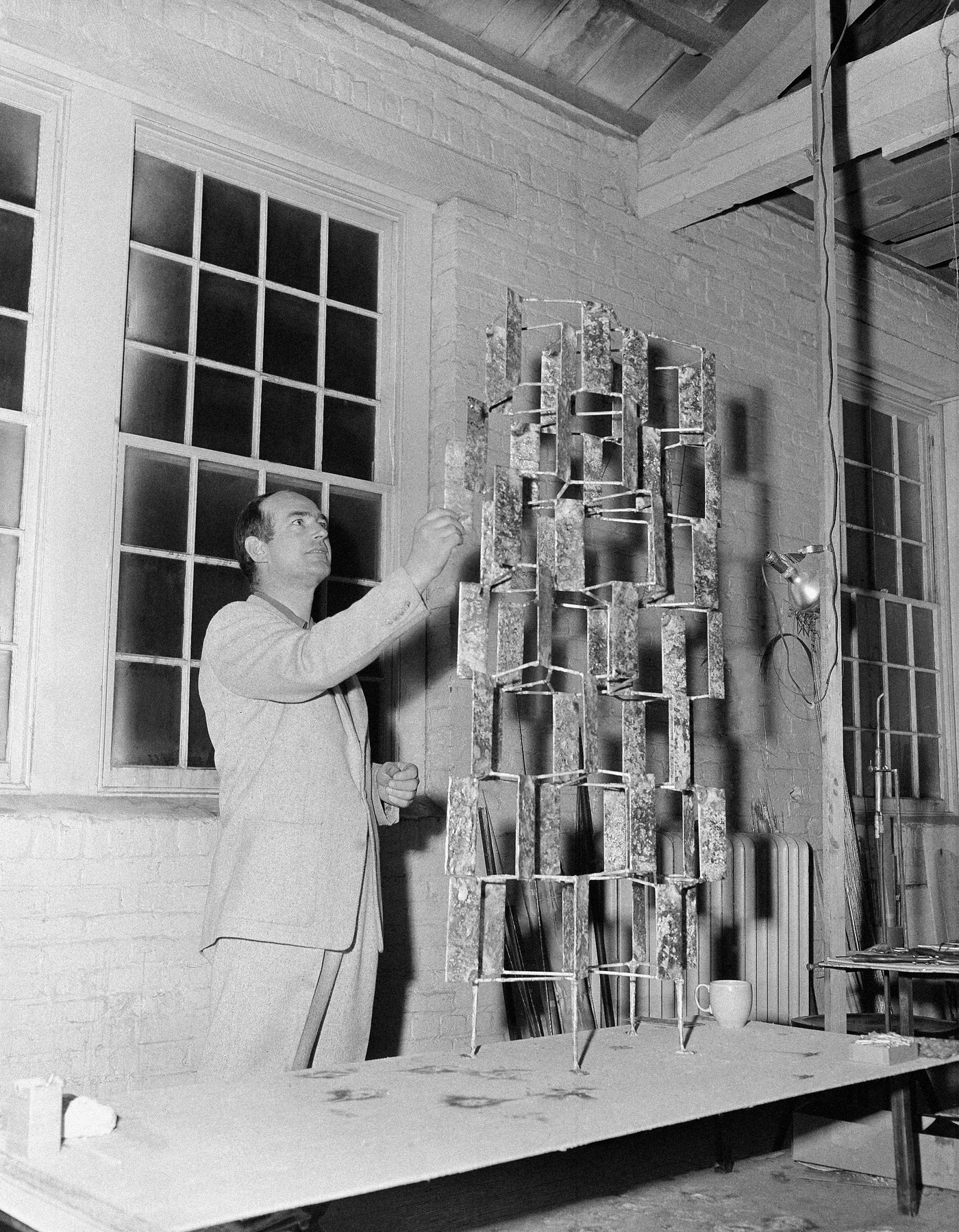 Bertoia looks at one of his art pieces at his studio in Barto, Pa., in May 1956.

The sculptor was born Arieto Bertoia in Italy in 1915. He moved to Michigan as a teenager, where he went to college with some future heavy hitters: architect Eero Saarinen and designers Charles and Ray Eames. Bertoia was part of the team that designed one of the Eames' first bent plywood chairs. Later, Bertoia moved to a small town in Pennsylvania, where he designed his famous chairs for the furniture company Knoll. But Bertoia's real love was sculpture.

Once Bertoia discovered that sculptures could make sound, he became obsessed — and built hundreds of them.

"I build sculptures that can move in the wind, or that can be touched and played, like an instrument," Bertoia said in an interview that aired on public television a few years before he died in 1978. "My works are all over the world. But for years, I have kept my best pieces at home, which is really my laboratory."

In his barn, Bertoia would play the sculptures for small invited audiences, or by himself late at night. His sounding pieces never got that much attention from the wider art world — until now. They'll be part of an exhibition in May at the Museum of Arts and Design in New York City. And there's the collection of Bertoia's recordings put out by Important Records. John Brien runs the label. Brien says he's trying to share the feeling of Bertoia's barn with a wider audience. 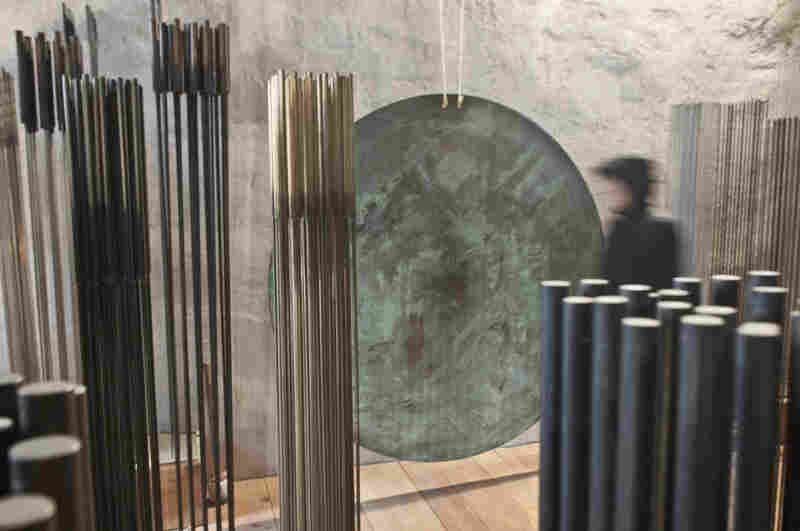 In his barn, Bertoia would play his sculptures for small invited audiences, or by himself late at night. His sculptures are in the barn where he left them when he died in 1978. John Brien/Important Records hide caption 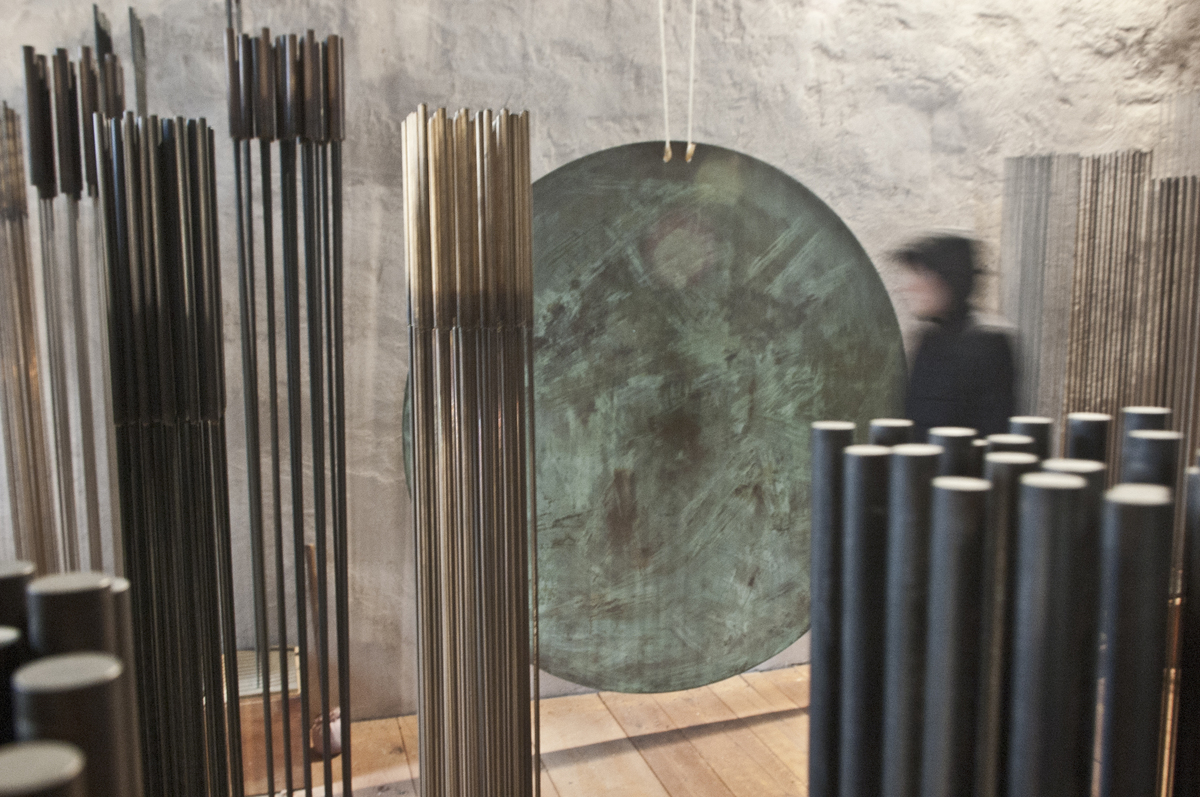 In his barn, Bertoia would play his sculptures for small invited audiences, or by himself late at night. His sculptures are in the barn where he left them when he died in 1978.

"It's a quasi-religious experience," says Brien. "It's meditative. It sends you inside of yourself, the physiological effect of vibration."

But it's hard for a recording to convey the full experience of hearing and seeing the sculptures together, in exactly the environment Bertoia intended. How long those sculptures can stay in his barn, however, is an open question.

"It's almost too late," says Harry Bertoia's daughter, Celia. "We've got to move the collection before it is too late."

Celia Bertoia started a foundation to preserve her father's legacy. She says the barn is not a suitable place to store his sculptures — partly because of security, and partly because it's just not equipped for big crowds.

"One thought we've had is to have part or all of sonambient collection moved to a public museum somewhere, and try to recreate that space." Celia Bertoia says. "It would make it so much more accessible. I feel that I have to do this. I've got to protect my father's works." 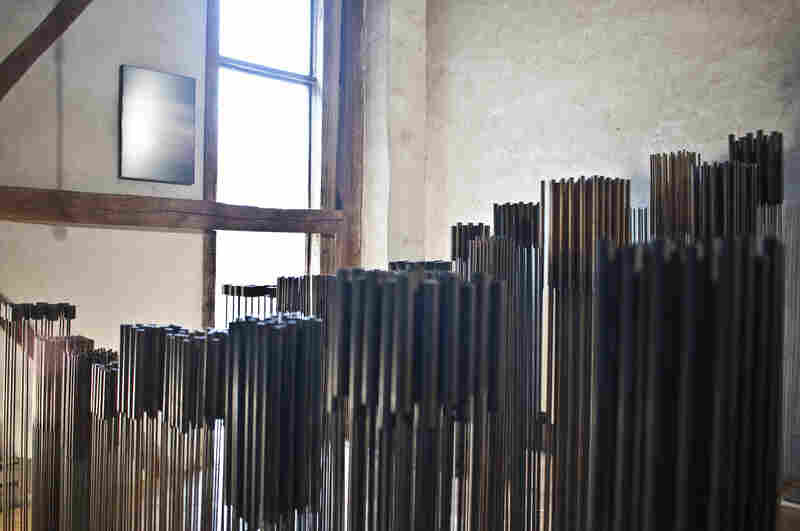 Bertoia's children are at odds over whether their father's sculptures should be moved. Val Bertoia says his father wanted the sculptures to stay in the barn. Celia Bertoia believes the collection should be moved to a location with better security and accessibility. John Brien/Important Records hide caption 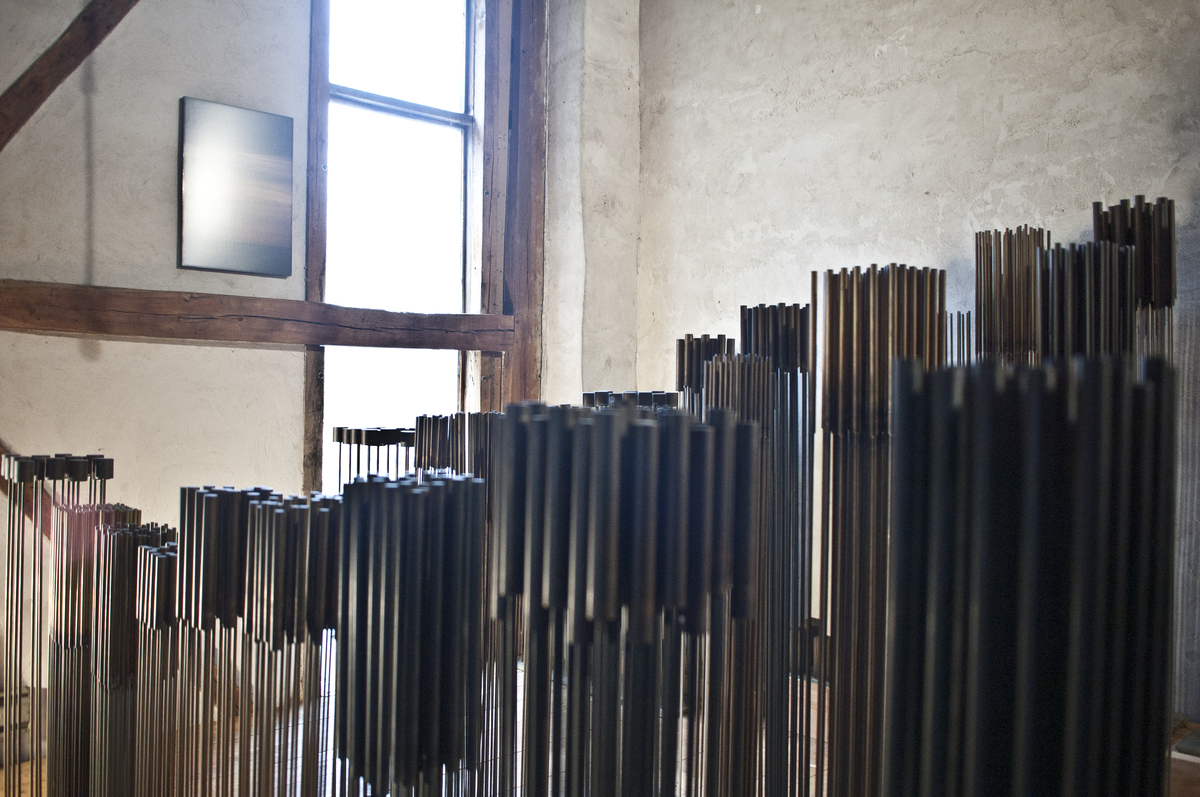 Bertoia's children are at odds over whether their father's sculptures should be moved. Val Bertoia says his father wanted the sculptures to stay in the barn. Celia Bertoia believes the collection should be moved to a location with better security and accessibility.

Both Celia and her brother Val insist they're trying to carry out their father's wishes. But they have very different ideas of what that means. Celia is not happy with the way her brother managed the estate. And she filed a lawsuit seeking control of her share. Val still lives in the Pennsylvania house where he grew up. And he works in the same sculpture studio his father used to run.

"When I worked with Harry in the 1970s, that was his intent," Val Bertoia says. "To keep everything as is throughout his life, and throughout my life and on. We feel it's more of a historical landmark and grave site. That it would be kept almost museum-like, very precious."

For a while, Val Bertoia tried to fight his sister's lawsuit. But he ran out of money. And now seems resigned to the idea that many of his father's sculptures will be leaving the barn as soon as this fall. But Val Bertoia says he'll continue to offer tours of the family's property, where his father is buried. The grave is marked by one of his sculptures, a huge one-ton gong.