Accessibility links
Book Review: 'Jane Steele' By Lyndsay Faye Lyndsay Faye's new Jane Steele reimagines the classic Victorian heroine as a killer with a heart of gold, who refuses to settle for her historical lot and strikes out at men who try to abuse her. 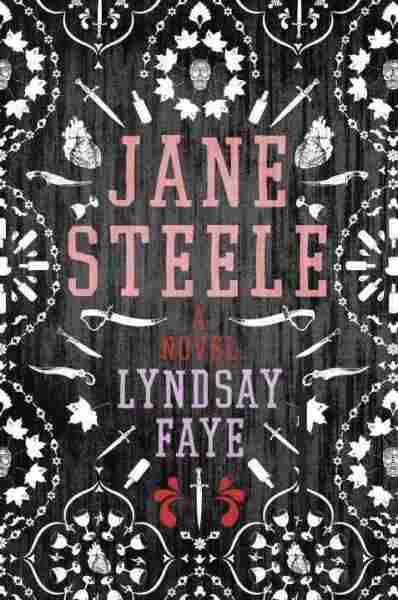 Let's say you've read every classic 19th century woman's novel, every canonical retelling of those novels, the more recent mashups (like "Pride & Prejudice & Zombies" and "Android Karenina"), and yet you know there's something missing, a book that would combine the dense plot and rich characterizations of bygone books with more modern sensibilities.

Jane Steele by Lyndsay Faye is that book. While the story's eponymous heroine lives in Victorian England, is orphaned and sent to a boarding school and then winds up as a governess on a grand estate, her similarities to, say, Jane Eyre stop at the name. Faye hasn't embarked on a retelling of Brontë's masterwork, or anyone else's, for that matter. Her novel pays homage to the greats, yet offers a heroine whose murky past and murderous present remind us that some female behavior in other eras never made it into print.

We meet Jane Steele when her horrid Aunt Patience consigns her to the Lowan Bridge School. There she makes her first friend, Rebecca (a relationship that may be the most radical in the book), and commits her second murder. That's right, this Jane is a killer, and Faye does not stint on descriptions of struggle and gore – that's part of what makes her protagonist feel immediate and real.

However, this Jane is also a fighter with a heart of gold who refuses to settle for her — or any other woman's — historical lot. We know early on that Jane believes she is in the right: "Of all my many murders, committed for love and for better reasons, the first was the most important," she says. Without spoiling anything, it's safe to say that's because Jane's steely sense of self is forged there, something that allows her to return at age 24 to a home she knows should be hers — as, of course, a governess. However, that first murder also convinces Jane of her own essential wickedness — another strong but lightly handled thread back to Miss Eyre.

Faye hasn't embarked on a retelling of Brontë's masterwork, or anyone else's, for that matter. Her novel pays homage to the greats, yet offers a heroine whose murky past and murderous present remind us that some female behavior in other eras never made it into print.

What comes next may be the most delicious part of an already rich novel: At Highgate House, Jane finds herself in the midst of a most unusual household. The master, Charles Thornfield, is a handsome Englishman who relished his service in the Punjab so much that his cook, housekeeper, majordomo, and juvenile ward are all Sikhs. Jane's precocious charge keeps everyone on their toes as they battle a sinister East India Company scheme to impoverish them.

Battle-scarred but unbowed, Charles and his mysterious butler Sardar enroll Jane in regular household defense and weaponry classes, at which our young killer excels. At the same time, Jane and Charles discover they're falling in love. Reader, will she marry or murder him?

Lyndsay Faye's triumph is that neither option matters as much as the compassion these two wounded people manage to find for each other without sacrificing their own internal codes. While the scenes of Jane swinging a sword (or an equally sharp and deadly fountain pen) may be delicious, the satisfaction in this novel is its conviction that the self is enriched by an understanding of others, whether their motives are villainous or amicable.