Accessibility links
Book Review: 'The Pharos Gate' By Nick Bantock Nick Bantock returns to his epistolary lovers in a new volume, The Pharos Gate. In an age of instantaneous digital communication, Griffin and Sabine celebrate the pleasures of paper and ink.

Reading Between Worlds With Griffin And Sabine

Reading Between Worlds With Griffin And Sabine 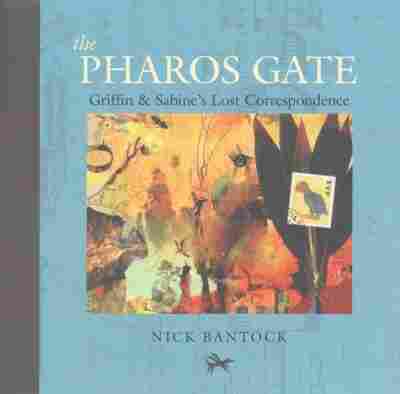 I came of letter-writing age with the internet. In 1996, the magical and miraculous was, to me, the possibility of finding other people who loved the things I loved no matter how far away: I'd perform the correct strokes, dial up a screeching djinn, and a glowing portal would open between me and the vastness of the world. It was a quiet place where sharing real names was a mark of deepest trust, where it was possible to pour one's rawest, most vulnerable thoughts into an aether where probably no one was listening — but if someone was, they might draw closer and be your friend.

My first medium for intimate communication was electronic. One of my dearest friendships today is fifteen years old, born of roleplaying online and a shy yielding of first name, then surname, then phone number, then address, then decision to meet In Real Life. The letters we wrote to each other were thousands of words long, but they were in email — Hotmail accounts now defunct, full of confessional teenage fervor in which we built our understanding of ourselves and the world.

I remember first noticing Nick Bantock's Griffin and Sabine books while working in a small independent bookstore around the same time, and I had little interest in them. They were beautiful — anyone could see they were beautiful — but the wonder of them fell aslant the wonder of my own life: that my best friend in the world should live 3,000 miles away; that I should be able to speak instantly and regularly with her, and with people who saw the sun setting while it was still high in my sky. Who had the time or the patience for letters when there was so much contact, so much sorcerously swift communication to be had through my portal to the Otherworld?

More than its preceding volumes, 'The Pharos Gate' addresses letter-writing as a magical act that can bridge worlds, resist the limits of space and time in order to connect one loving heart to another.

It's not that I regret this attitude now; it's that I regret the loss of the kind of internet that made it possible. But in losing that internet to social media — to electronic communication becoming the banal default instead of the miraculous exception — I gained appreciation for the slow, the hand-written, the gift of extra effort expended on my behalf. I met people In Real Life, or on the internet, but became closer to them through something I've come to call Letter-Space.

As it turns out this frame of mind was perfect, was necessary, for coming to love Griffin and Sabine, and in particular this new volume, The Pharos Gate: Griffin & Sabine's Lost Correspondence.

It is every bit as beautiful as its predecessors; the gorgeous mixture of art styles and stationary, the echoing of a letter or postcard's contents, the delightful tactility of carefully removing a letter from an envelope affixed to the inside of a page and finding different styles of hand-writing in evidence. But more than its preceding volumes, The Pharos Gate addresses letter-writing as a magical act that can bridge worlds, resist the limits of space and time in order to connect one loving heart to another. Pursued by the sinister Forlatti, Griffin and Sabine travel the world, circling the Pharos Gate in Alexandria, where they are certain they will be able, at last, to meet. As they approach each other the forces struggling to keep them apart grow more frightening, more dangerous — but their letters are untouchable, their union as inevitable as a postscript.

I read all four books in a rush, devoured them in a way that might seem antithetical to their project. I found myself wondering what someone who read the trilogy in the early '90s would make of this new volume. For myself, it was perfect: A satisfying cap to everything that came before, not because of its explication of events, but because of its execution. It neatly folds the pleasures and pains of travel with those of correspondence: two would-be lovers travelling as their letters do, conjuring each other up and chasing each other's shadows until their worlds align enough to allow an embrace.

As I write this, my desk is covered in correspondence from #LetterMo, the Month of Letters begun by Mary Robinette Kowal in 2010, renewed every February. My laptop is shadowed by a stack of 42 letters from a single, tremendously dear friend, written over the course of the past 58 weeks. I try very hard, in the midst of email's urgency, to find an hour in the day to sit at my desk and write a letter; it feels, invariably, like an exhalation. In the press and hurry of the every day I misplaced the wonder of correspondence, my glowing portal to the Otherworld. I found it again in a sheet of paper under my hand.

See Images from 'The Pharos Gate'