Accessibility links
Why Supreme Court Nominee Merrick Garland's Judicial Record Slips Through Critics' Fingers The Supreme Court nominee has a long list of past opinions, but the court he has sat on for nearly two decades has rarely weighed in on controversial issues. 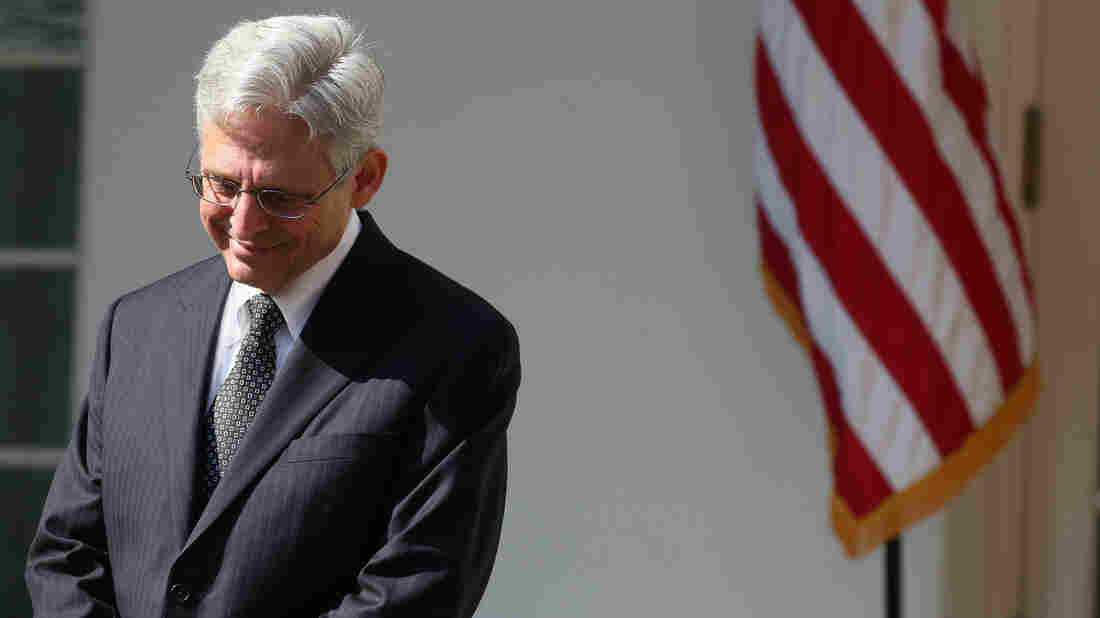 Judge Merrick Garland is introduced by President Obama as his nominee for the Supreme Court at the White House earlier this month. Mark Wilson/Getty Images hide caption 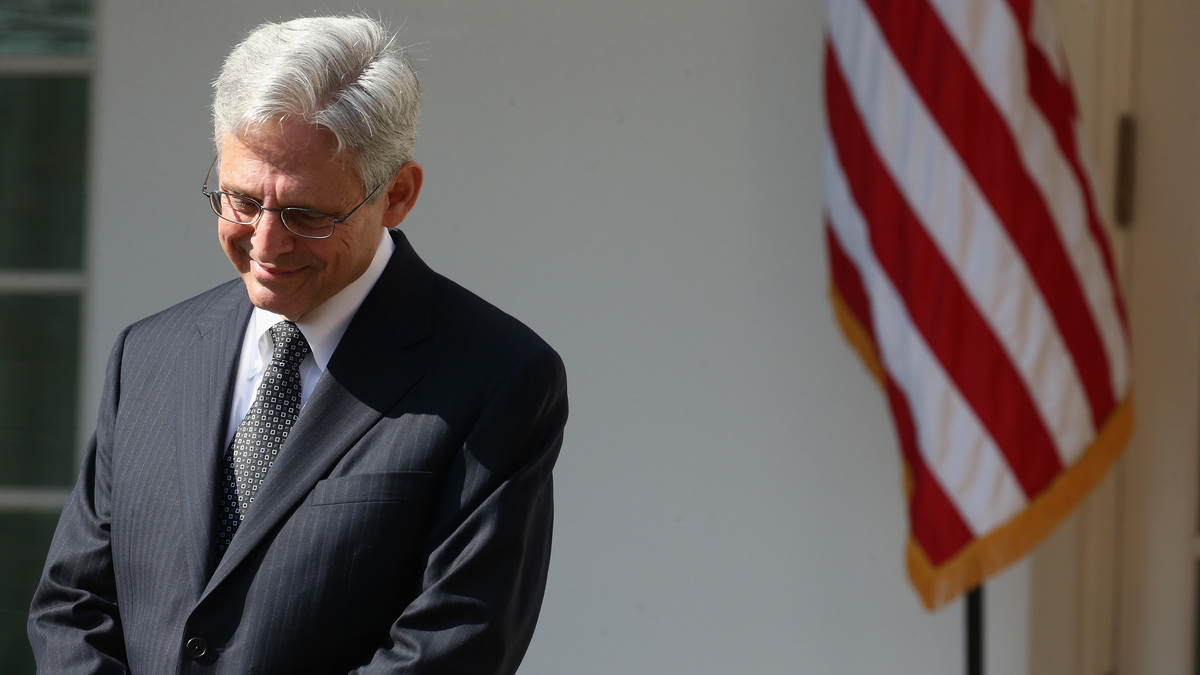 Judge Merrick Garland is introduced by President Obama as his nominee for the Supreme Court at the White House earlier this month.

Sometimes it pays to have a boring day job.

Even those who oppose Supreme Court nominee Merrick Garland concede that getting people's blood boiling over his record is difficult. That's in part because of the court he has served on for 19 years.

Three of the current Supreme Court justices came from the same court where Garland now sits as chief judge — the U.S. Court of Appeals for the District of Columbia.

"We think of it as the second most important court in the land, but in fact it is the single most boring," says Tom Goldstein, the publisher of SCOTUSblog, the leading Supreme Court online publication.

"It's a court that only lawyers could love," says Goldstein, who notes that the court deals "with so many administrative issues like how phone companies should be organized and how power plants should sell electricity and on and on." The issues, Goldstein adds, are "practically important, but not very interesting."

In short, the D.C. Circuit, as it is known, deals with the regulatory state — the whole alphabet soup of federal agencies.

For that reason, the court rarely deals with hot-button social issues like abortion, gay rights, the death penalty, religion or affirmative action — issues that arise far more frequently in the other federal appeals courts.

Still, conservative activists see Garland's record as tilting distinctly to the left. The Judicial Crisis Network has already spent $4 million on TV and radio advertisements in 10 states insisting that he "would be the tiebreaking vote for Obama's big government liberalism."

Proving some of these assertions, however, can be difficult.

"The evidence that is being cited for the accusation that Judge Garland has some bias against Second Amendment rights is from thin to nonexistent," says Miguel Estrada, a conservative Republican lawyer whose own nomination to the D.C. Circuit was stalled by Democrats during the George W. Bush administration.

Estrada notes that the charge that Garland is hostile to gun rights stems from a case challenging the District of Columbia's ban on handguns. In 2007, a three-judge panel — not including Garland — ruled for the first time that there is a constitutional right to own guns for self-defense. Afterward, Garland was one of four judges, including a conservative Reagan appointee, who voted for the full court to rehear the case.

Estrada explains that "the rules say that the full court may wish to rehear the case itself when the case raises a question, and I quote, 'of exceptional importance.' "

But Carrie Severino of the conservative Judicial Crisis Network contends that Garland, by voting to have all the judges on his court rehear the case, was signaling his opinion on the issue itself.

"His vote suggests that he doesn't think that the Second Amendment even requires you to be able to have a gun for your own protection in your home," Severino says.

She similarly defends the claim in her organization's ad that Garland's record has allowed the Environmental Protection Agency to run amok with bureaucratic regulations.

"The Supreme Court's role is to be a check on the other branches of government, not to simply rubber stamp and greenlight whatever they want to do," Severino says. Judge Garland, she maintains, "tends to just defer to these agencies."

Estrada replies that for more than three decades the Supreme Court has said that when a statute's language is unclear, the courts are to defer to agency regulations. That "is not a particularly partisan" legal position, he contends, since the courts tend to defer to Republican administrations when they write conservative regulations and Democratic administrations when they write liberal ones.

This sort of deference "is one of the rules of the game," Estrada adds. "Its application does not call into question, you know, the bias or the judgment of the judge who's just applying the rules that the Supreme Court has set forth."

It is not just conservative activists who object to Garland's record. Liberal activists do, too. They note that Garland, a former prosecutor, is less sympathetic to the rights of criminal defendants than most of his liberal and even some conservative colleagues on the appeals court.

And there is quiet criticism too from liberals about his votes on national security issues, particularly the treatment of prisoners at Guantanamo Bay, Cuba. Most prominently, in 2003 Garland and two Republican-appointed judges agreed with the Bush administration that the courts had no jurisdiction to hear the claims of wrongful imprisonment brought by Guantanamo detainees. The decision was subsequently reversed by the U.S. Supreme Court.

SCOTUSblog's Goldstein says that decision was entirely justifiable, until the Supreme Court's ruling: "What Garland was really doing was saying, 'I've got to apply the law that comes to me now, which dates to World War II and it just favors the government.' "

Ultimately, though, the biggest objections to Garland come from conservative activists, who say that even if he is a moderate liberal, he is still very different from the man he is nominated to replace, Justice Antonin Scalia.

As Goldstein put it, "Conservative activists are right that Merrick Garland would tilt the Supreme Court very seriously to the left, but that's because he's a Democratic nominee and he's breathing.

"Anyone appointed by a Democratic president is going to be much more liberal than the archconservative Justice Scalia. But among potential Democratic appointees, he's as good as conservatives could ever reasonably hope for. He is really down the middle."

Indeed, Garland rarely dissents. He is seen by judges of all ideological stripes on his court as a genuine consensus builder. In his 19 years, he has authored just 16 dissents.

One in particular tells a lot.

It's from a 2004 case concerning the False Claims Act, the government's main litigation tool in guarding against fraud, and whether an Amtrak employee named Edward Totten could go forward with a whistleblower claim that two companies had delivered defective rail cars.

Sitting on the three-judge panel with Garland was then-Judge, now Chief Justice of the U.S. John Roberts. Roberts and another judge ruled against Totten, saying that the False Claims Act only covers fraudulent bills presented to the government, and Amtrak is not the government.

Garland, in dissent, replied that the government gave Amtrak the money to pay for the rail cars. He said that Roberts' narrow reading of the whistleblower law would leave large amounts of government money unprotected, meaning it could be used fraudulently without fear of prosecution.

Garland was vindicated a few years later when Congress passed a series of amendments to the false claims law, and the Senate report on the bill said specifically that the amendments were needed to correct the D.C. Circuit's "erroneous" interpretation of the law.

One of the three co-sponsors of the amendments was Republican Sen. Charles Grassley, now chairman of the Senate Judiciary Committee, who is refusing to hold a hearing on Garland's nomination.