Accessibility links
Bernie Sanders Has Already Won In A Way, Despite The Math Bernie Sanders won sweeping victories Saturday, and more are sure to come over the next couple of months. Can he win the nomination? And is that what really even matters?

Despite The Math, Bernie Sanders Has Already Won

Despite The Math, Bernie Sanders Has Already Won 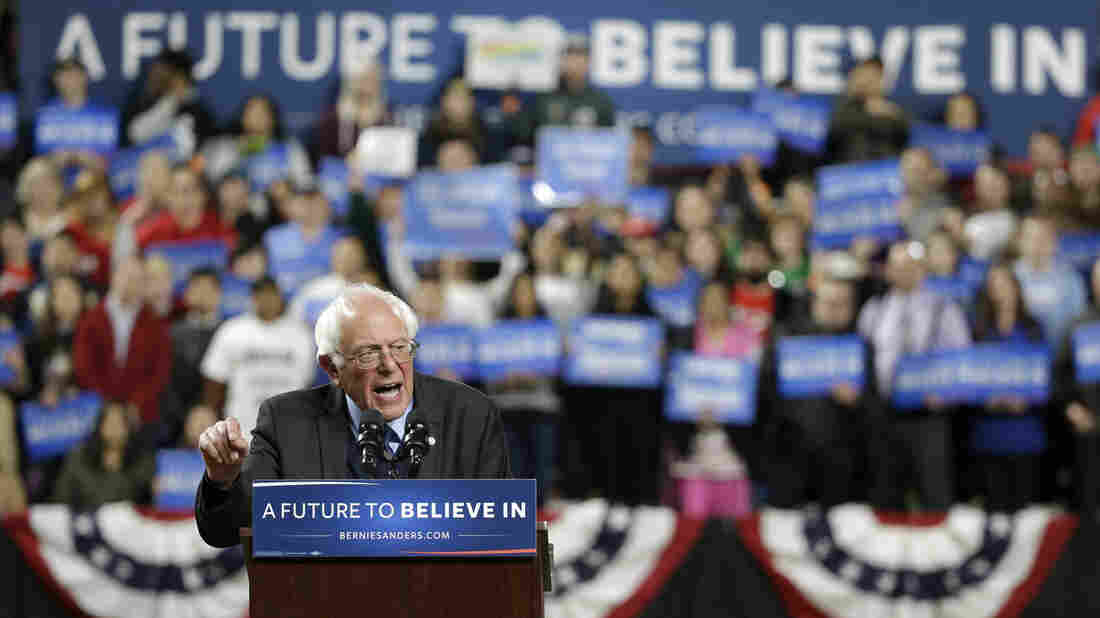 Bernie Sanders speaks at a rally Friday in Seattle. Sanders won by a big margin in Washington state and hopes to pick up more big wins in coming weeks. Elaine Thompson/AP hide caption 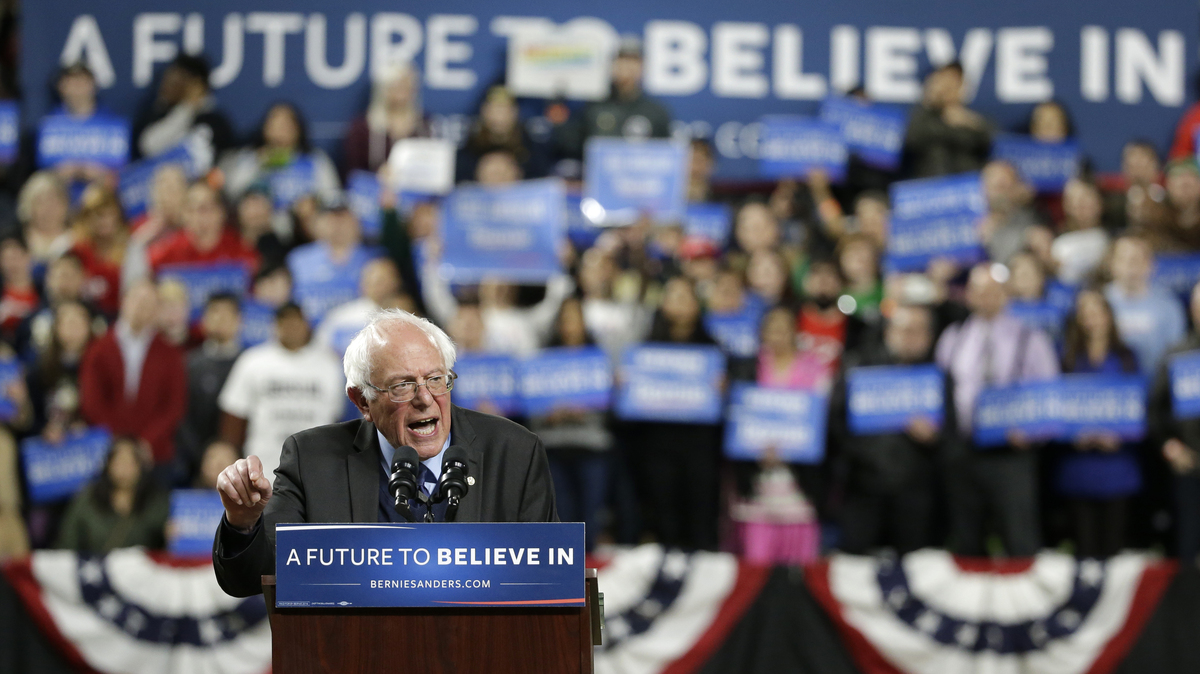 Bernie Sanders speaks at a rally Friday in Seattle. Sanders won by a big margin in Washington state and hopes to pick up more big wins in coming weeks.

Sanders won with 82 percent in Alaska, 70 percent in Hawaii and 72 percent in Washington. That Washington margin was even bigger than the Sanders campaign expected — and significant, because there are 101 delegates up for grabs there.

AP has not yet allocated all the delegates out of Washington. More will be tallied in Sanders' column over the next several weeks as the state party releases margins by congressional district. But if Sanders' share holds, when all's said and done, he could net more than 60 delegates out of Saturday.

That's impressive and would cut into Hillary Clinton's pledged-delegate lead significantly, by 20 percent.

It doesn't change the math much, but that might not even be the point. Sanders has a narrow path (laid out below in detail), but he is going to win in lots of places over the next two months in similarly sweeping fashion. Regardless of what happens, when people look back on this 2016 Democratic primary, Sanders won't be dismissed as a gadfly or fringe candidate, as he was treated at the beginning of this campaign. He has already had a major impact on the Democratic Party, on Hillary Clinton and on how they talk about the issues he's cared about most for the past 40 years — income inequality, regulation of Wall Street banks and power and influence in politics. 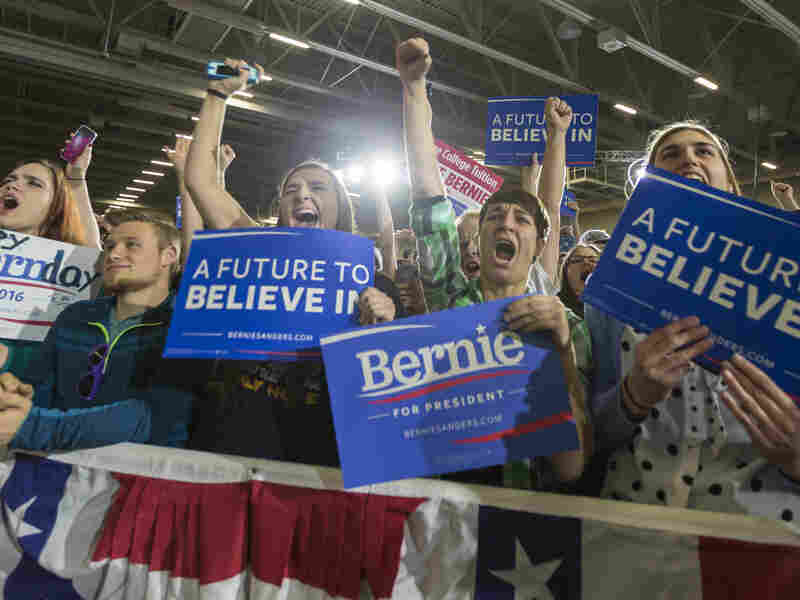 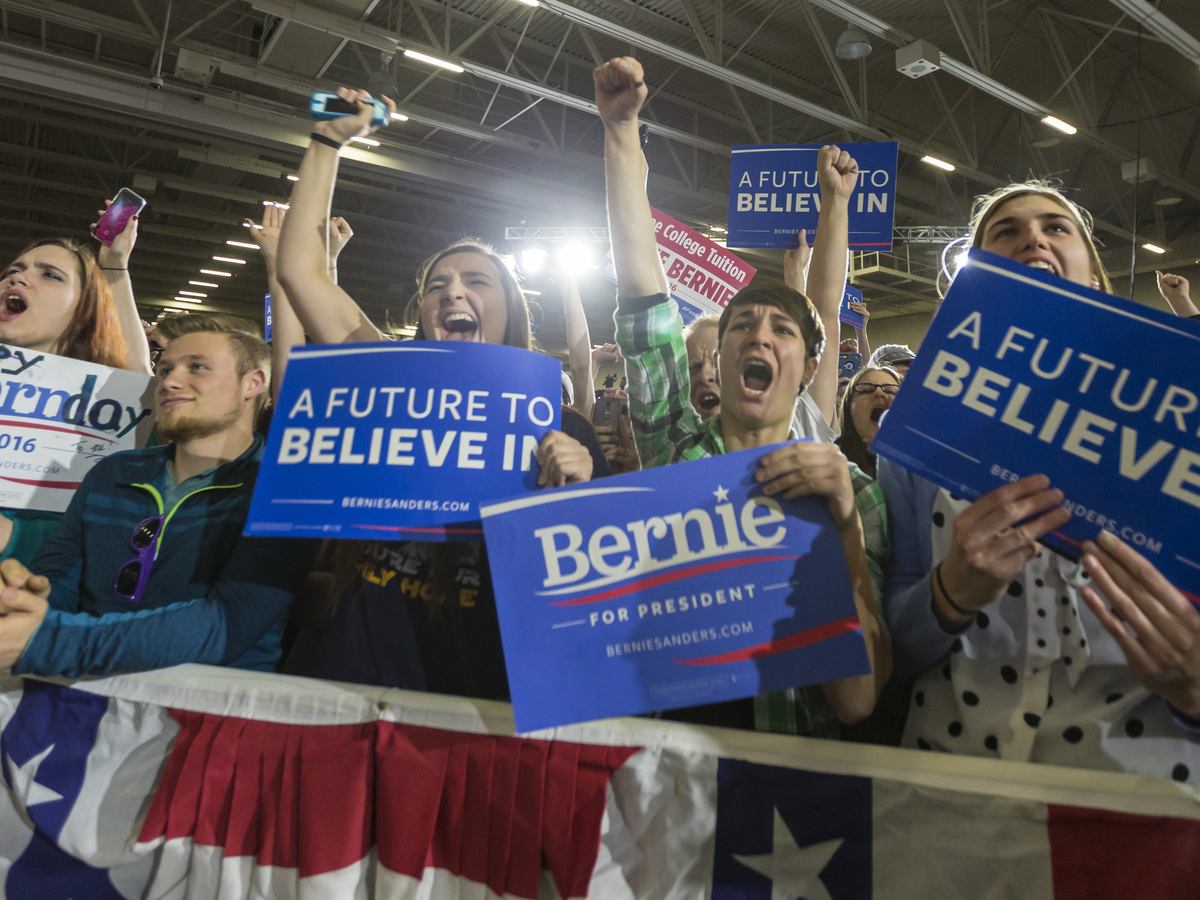 So can he win? "Our calculations are that, in fact, we can win the pledged delegates," Sanders said Sunday morning on NBC's Meet the Press. Sanders mentioned that his focus is on Wisconsin and New York, the two biggest contests over the next three weeks, and he pointed out that he has "won five out of the six last contests in landslide fashion."

There does remain a path, but with each passing contest, it gets narrower and narrower. Part of that is because Democrats allocate delegates proportionally, and despite those big wins Saturday, his campaign had suffered major setbacks over the past two weeks.

His campaign saw a real path to a pledged majority if he had split the day on March 15, building off that win in Michigan a week earlier. It didn't happen. Instead, Clinton swept Sanders that day, including in Ohio, as well as in Missouri and Illinois, where his team thought he'd win. He hit one more roadblock a week later with a loss in Arizona, another place his campaign had pointed to as key. 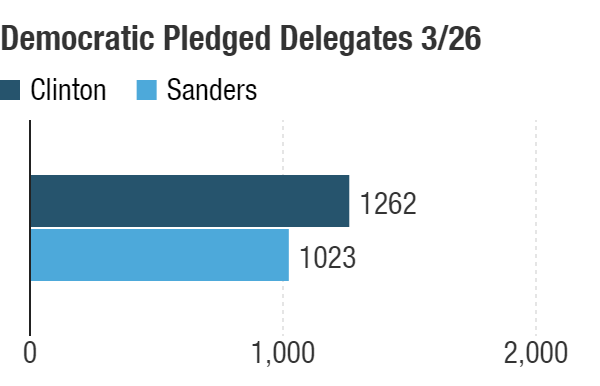 It lines up well for him over the next 10 weeks, but winning everywhere he's expected to — places like Oregon, Kentucky and West Virginia, as well as caucus states in the West — won't be enough.

Let's take a look at some key dates that pose important tests and what Sanders would need to win each day. This path gets him a 2-pledged-delegate majority. (By the way, we've already written how this is mathematically going down to June 7, and it could all come down to California, which votes that day): 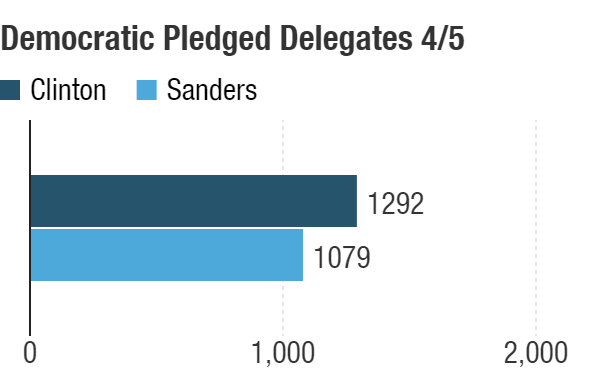 Sanders needs a big win here. Madison is a hub of liberalism and home to the University of Wisconsin. The 2008 electorate was 87 percent white and ranked third on NPR's list of places where Sanders should have his best shot going forward, considering the high share of white men as compared to black voters. SANDERS NEED: 65 percent (56 to 30 delegate split)

Another Western caucus state where Sanders is expected to do well. SANDERS NEED: 71 percent (14 to 10) 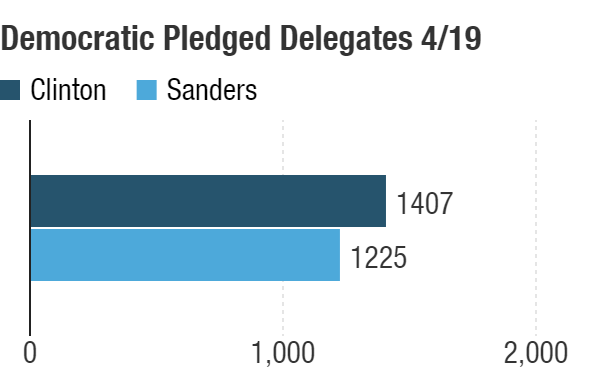 This is a big day. New York holds a big cache of delegates; is Clinton's home state, where she was a senator and where her campaign is headquartered; and Sanders was born in Brooklyn. He's calling for a debate there, but Clinton has not agreed to one. (Clinton, by the way, has not yet lost anywhere she's lived — Arkansas and Illinois.) New York might be tough for Sanders given it was 30 percent nonwhite (16 percent black, 10 percent Latino) in the 2008 primary. A win there for Sanders would say something. SANDERS NEED: 55 percent (136 to 111) 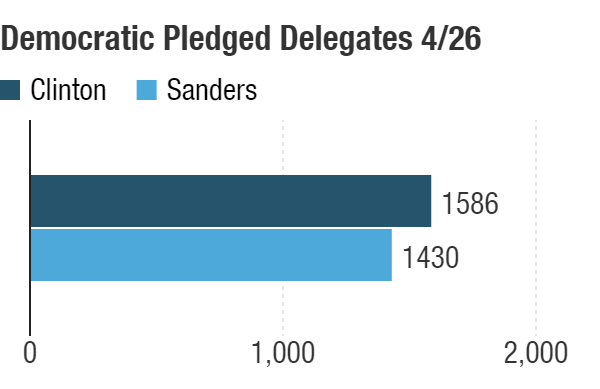 This is another big test for Sanders. These are all primaries, and he's fared better in caucuses. Clinton also starts out the favorite in Maryland, which in 2008 was 47 percent nonwhite, including 37 percent black and almost a quarter black women, a real strength for Clinton. Pennsylvania is another key and the biggest haul of delegates that day. It's a place where Clinton did well in 2008, but it was 80 percent white in that primary. That could help Sanders, though Clinton did win neighboring Ohio with similar demographics. Sanders will need generous splits. If he can't pull these kinds of margins, it's the day people will start to say it's over. On the other hand, if he does pull them off ... SANDERS NEED: 54 percent (205 to 179) 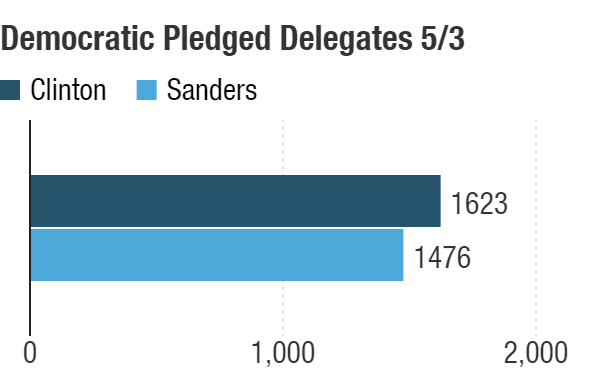 This is another industrial Midwestern state where Clinton did well in 2008, but Sanders will need to chip away at her margin. Demographically, it looks similar to Ohio and Pennsylvania. SANDERS NEED: 55 percent (46 to 37)

Sanders won Democrats Abroad, and while Clinton won the Northern Mariana Islands, give Sanders the win for math purposes. SANDERS NEED: 71 percent (5 to 2) 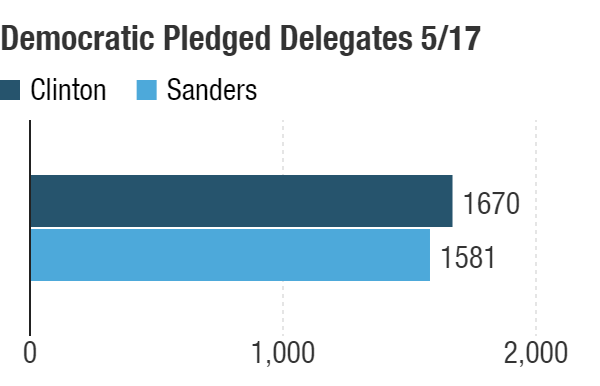 This should be a big Sanders day. Oregon looks a lot like Washington state, and Kentucky's primary in 2008 was nearly 90 percent white. SANDERS NEED: 69 percent (80 to 36) 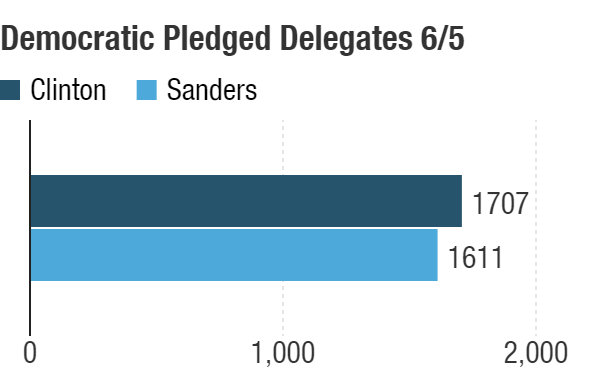 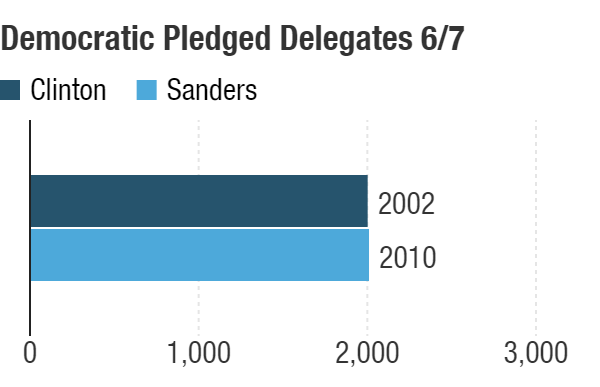 And it all comes down to this. The final big day of voting, with all eyes on California. In this scenario, Sanders would go into the day down 96 delegates. To pass Clinton, and have enough to hold off a likely Clinton win in Washington, D.C., the following week, Sanders would still need 57 percent of all delegates on this day. He should easily take big wins in the Western caucuses in Montana, South Dakota and North Dakota. Clinton would be favored in New Mexico, and then there's California and New Jersey, the two biggest prizes of the day. They're not the easiest states for Sanders. California has a very liberal reputation, but it was 48 percent nonwhite (mostly Latino, though) in 2008. New Jersey was 41 percent nonwhite in 2008, and almost a quarter were black. For Sanders to pull this off, he can't do it without California and New Jersey — and he has to win by substantial margins there. SANDERS NEED: 57 percent (399 to 295) 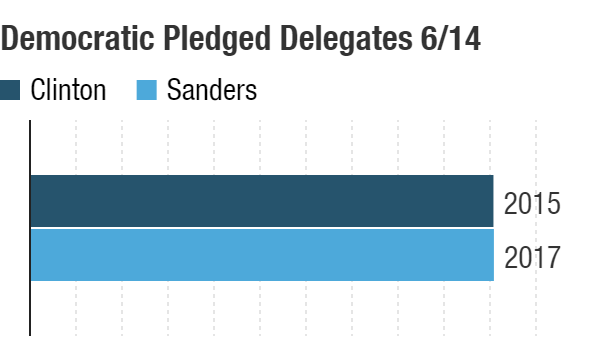 Clinton is the favorite here, and potentially a huge margin for Clinton could give her the pledged-majority lead back. Wouldn't that be something? Clinton put over the top by D.C. Democrats and superdelegates. The optics of that would not be good, and that's why Clinton's campaign is focused on winning the pledged majority by June 7 or before. SANDERS NEED: 35 percent (7 to 13)

There are clearly some major hurdles along that path, especially New York, California and New Jersey, for Sanders. But he's going to have lots of momentum and lots of wins in that stretch.

Sanders has made a real impact on the race, especially from a message standpoint. Many in the party are crying out for action on what Sanders is pushing — leveling the economic playing field, being tougher on big banks and Wall Street and pushing to get money out of politics.

What Sanders has done, coming from virtually nowhere, is remarkable and has had an effect on Clinton. She would have preferred to focus on Republicans and likely moderate her message and tone to appeal to the middle. Instead, she's had to look left.

What Sanders has done not only likely guarantees him a prominent slot at the convention, but ensures his message, and the issues he cares about deeply, a place at the Democratic table.

Sanders is going to fight on to June, but even if he doesn't pull off the majorities he needs, in a way, he's already won.

Commentator Cokie Roberts incorrectly says that Bernie Sanders needs 73 percent of all remaining delegates to get the nomination on the first ballot. In fact, he needs 67 percent, including superdelegates.