Accessibility links
Ready For A Road Trip? RVs Are Rolling Back Into Fashion More Americans are looking for a second home — on wheels. After crashing hard in the recession, RV sales have rebounded and are on track to approach record levels this year. 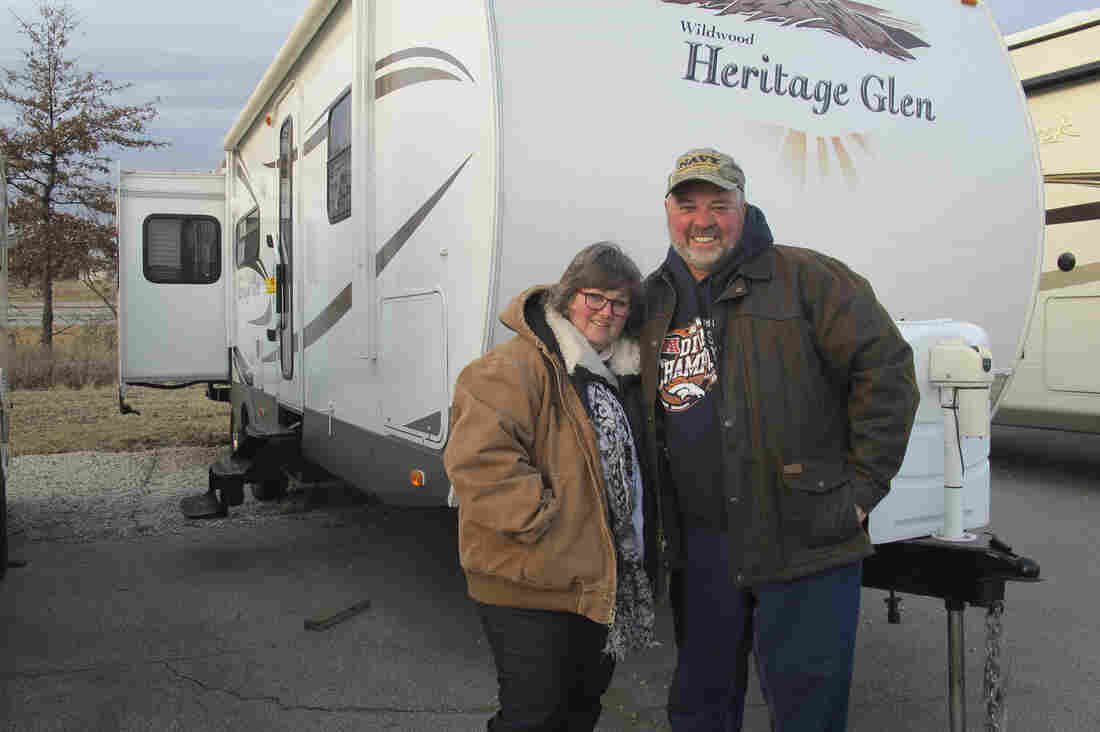 Grant and Cathy Lowe stand in front of a trailer they just bought. It is part of their retirement plans to own this camper, and they intend to have it paid off before they quit working. Frank Morris/KCUR hide caption 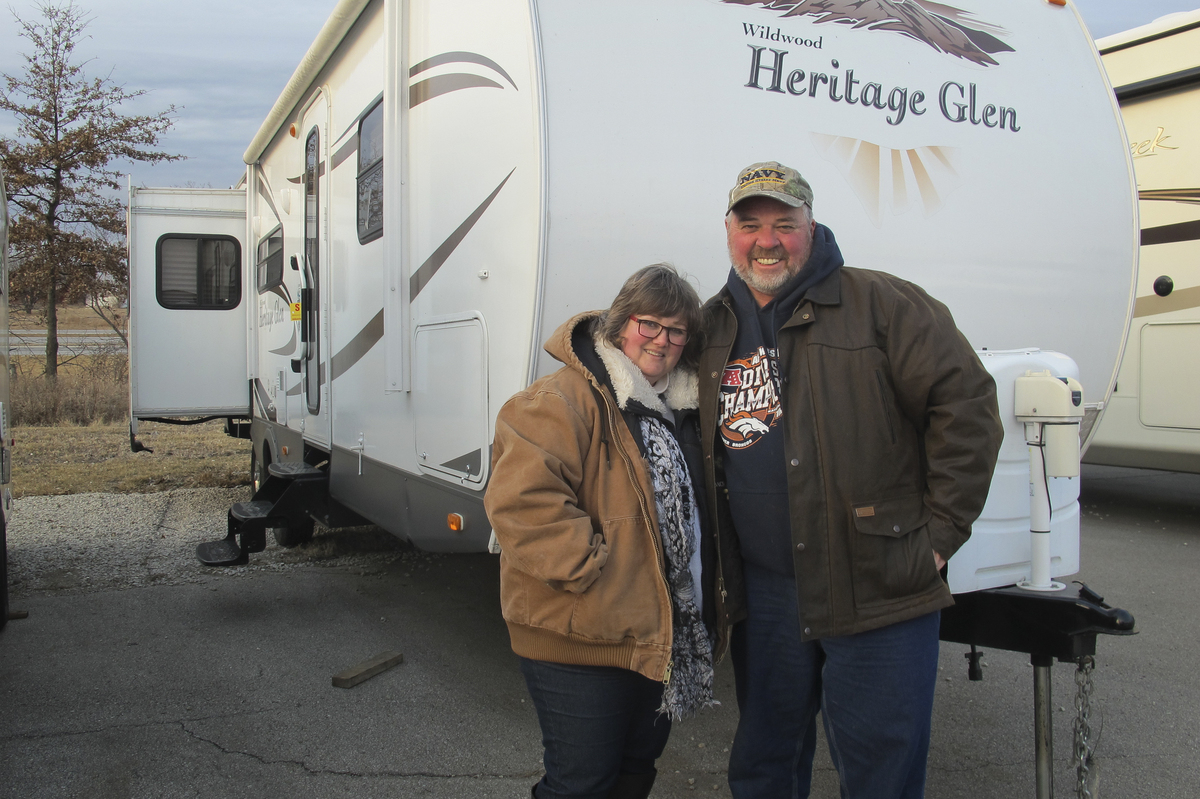 Grant and Cathy Lowe stand in front of a trailer they just bought. It is part of their retirement plans to own this camper, and they intend to have it paid off before they quit working.

Near record numbers of Americans are buying second homes — the kind on wheels, that is.

The Great Recession almost totaled the RV industry, but now camper trailers and motor homes are popular again. Daryn Anderson is the owner of an RV dealership south of Kansas City, and he says his sales here have roughly tripled since the bottom of the recession.

"Business has been great. Six straight record years and no end in sight," he says. "We're excited."

But seven years ago, during the recession, RV sales tanked. When President Obama wanted to spotlight the worst of the economy then, he actually went to the RV capital of the world — Elkhart County, Ind., where most American RVs are built.

Kyle Hannon, president of the Elkhart Chamber of Commerce, says unemployment more than quadrupled as dozens of manufacturers went under during that period of time.

"It was a tough time. A lot of companies were shut down. A lot of people have been laid off," he says. "Everybody knew somebody who was out of work."

Dealerships folded too, like the one Renee Hinson's parents ran for decades near Grandview, Miss.

"If you would have asked me, I would have thought we [the RV market] were sunk," she says.

Now, Hinson is thrilled to be selling RVs again.

"Having seen the business since the 70s forward, it's back to like the 70s," she says. "We've seen astounding growth."

RVs range from small teardrop-shaped trailers, with little more than a dry place to sleep, to the ultra-high-end motor homes Clint Mooney sells.

"That's a 55-inch TV. This coach actually has four televisions — three inside, one outside," Mooney says as he points to a $400,000 Winnebago camper that resembles a bus with swirly designs. It looks like a fancy, spacious apartment inside. The shower has a seat. The camper also has a stackable washer and dryer system. 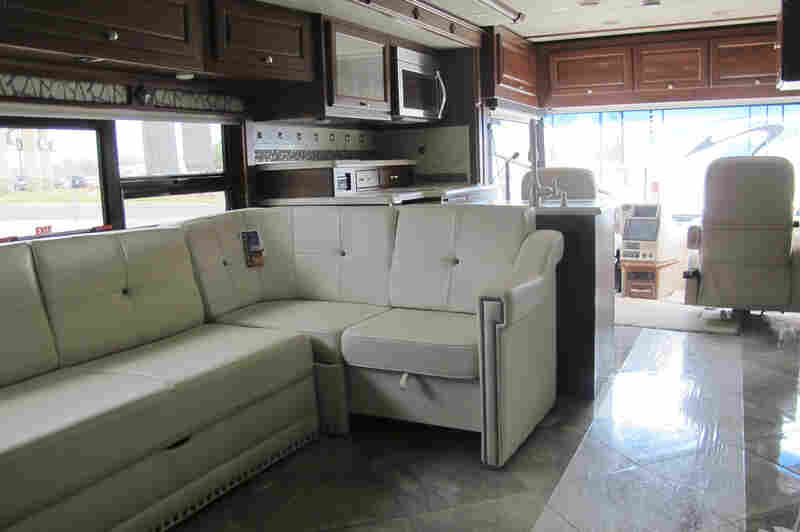 The interior of an RV at the annual RV show in Topeka, Kan. Frank Morris/KCUR hide caption

The front seats are wide, heated, massage-enhanced recliners, sheathed in something called "UltraLeather."

"These sell very well, actually. We have repeat customers who come back and buy them every two or three, four years," Mooney says.

The market has seen astounding growth partially because around 10,000 baby boomers turn 65 each day.

Grant and Cathy Lowe are in their 50s, and they just bought a trailer.

"We bought us a second home, and I think we're going to enjoy it," Grant Lowe says. "It's everything we want and we're real happy with it."

This camper figures large in their retirement plans. They intend to have it paid off before they quit working, and with the low interest rates and fuel prices, they're in good shape.

"Our jobs are very secure and stable. The economy seems to be on a pretty good rebound right now," he says. "So ... we feel safe that we can buy this time."

Baby boomers are not the only ones driving the expansion: The average age of an RV owner is now just under 50, according to an industry association, and Hinson says she's selling campers to people in their 30s like never before.

In the meantime, RV companies keep hauling out new products, displayed in an annual RV show in Topeka, Kan.

Greg Smith and his wife are customers looking for a toy hauler.

"I'm looking for something a little bigger. I need to put my four-wheeler in the back," he says.

Toy haulers are trailers or motor homes with garages built in. Smith is planning to spend upward of $100,000 on his.

With the broad smile on his face, it's easy to picture Smith enjoying a warm winter evening far from Topeka, out on the road with record numbers of his fellow Americans, hauling a home away from home.