Accessibility links
'Crazy Ex-Girlfriend,' Foolishness, Happiness And Josh Chan What began as a tale of pursuit has turned into a story about what it means to meet up with people who appeal to you for complicated reasons. 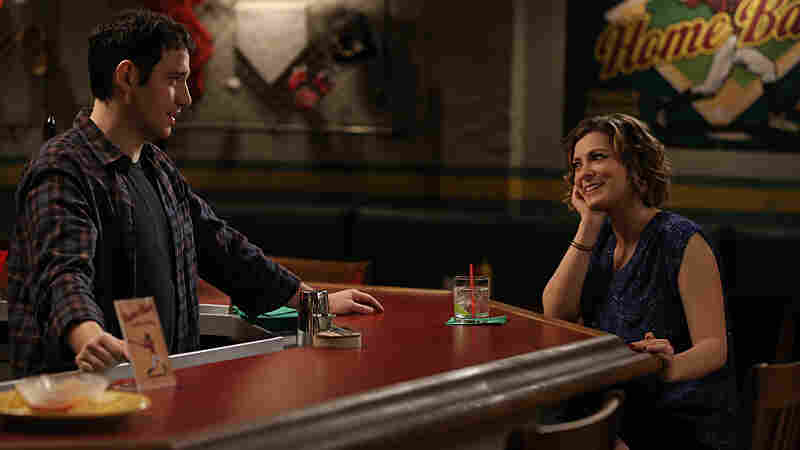 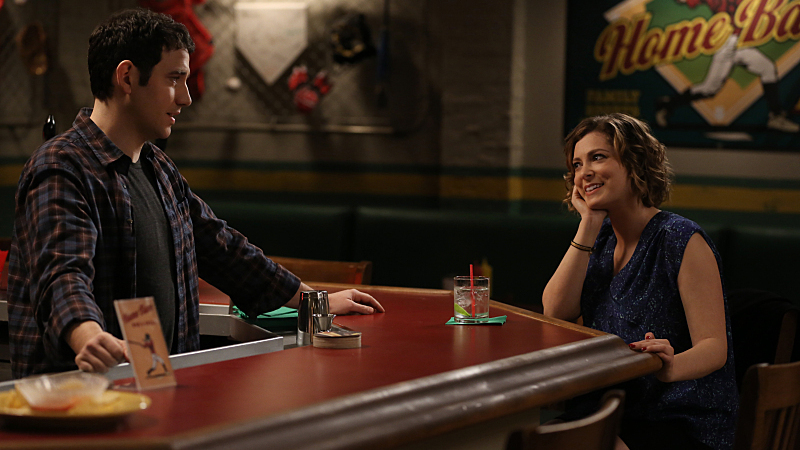 The pilot of The CW's Crazy Ex-Girlfriend was one of my favorite pieces of TV last year. Energetic and intriguingly unnerving, it set up the story of Rebecca Bunch (Rachel Bloom), who leaves her fancy New York lawyer job to move to West Covina, California, on an impulse. The impulse: a deeply felt, consciously irrational (and therefore officially denied) desire to pursue her ex-boyfriend, Josh Chan, who she'd learned was living there. Josh was not a recent ex, but a summer-camp ex. An ex from years ago, as close as Rebecca could come to a ghost. It introduced all kinds of strange tensions around stereotypes and tropes about "unstable" and "needy" and "clingy" and "crazy" women, and it was never afraid of how easy it was to be disappointed both in and for its lead character.

It was clear in the pilot that moving and starting her life over was not about Josh — at least not the real Josh. It really couldn't be. It was about an idea of Josh, who, because she really didn't know him, became a whiteboard on which Rebecca could scribble her idea of what she wanted to be, which she couldn't figure out how to do by herself. Had Josh been more real to her, her fantasy self would have encountered more parameters in writing its story. That's why she picked him. Not because she was obsessed with him, and not because she so loved him, and not in spite of the fact that she didn't know him. It was because she didn't know him, so life with him was unbounded by reality — by any reality at all.

As the first few episodes continued to follow Rebecca's pursuit of Josh, I found myself a little disappointed. I was more interested in her new friend Paula (Donna Lynne Champlin) and Greg (Santino Fontana), the cute but grouchy bartender she was foolishly ignoring, than I was in Josh (Vincent Rodriguez III), who remained a nice and largely oblivious cipher. Poor Josh greeted Rebecca with warmth like an old pal, in part because he didn't know she had created a relationship with him in her mind that he didn't know about. I was eager for them to get past Josh, and the way every episode title included his name and an exclamation point ("I'm Going On A Date With Josh's Friend!", "Josh And I Are Good People!") continued to center him in a way that made Rebecca's story seem a bit stalled at times.

I started to wonder: Wait, is this really about Josh? Because I don't actually want to watch a show about Josh.

But there was a bigger plan, which has revealed itself over the course of the season. What originally seemed to be a completely hopeless pursuit on Rebecca's part has gotten more complicated now that (1) she's owned up to having come to California because of Josh and (2) he, despite having a girlfriend, has both encouraged Rebecca and even kissed her, though he takes it back every time. He still seems well-meaning; he's also being unfair.

What's become clearer as the season has worn on (Monday night is the 16th episode, called "Josh's Sister Is Getting Married!") is that while Rebecca has issues with depression and anxiety, her story is more about the benefits and limitations of a kind of adaptive foolishness — the idea that a transparently bad decision like pursuing an old camp boyfriend to California in the belief that he is the answer to what's been missing in your life can be instead an adaptation to stress that, managed carefully, may not be all that bad after all. But like a lot of other things, how it turns out depends less on the fact that it happens than on what you do after it happens.

Rebecca isn't actually unhappy because she moved to California to be with Josh, after all. She certainly doesn't wish she'd stayed in New York. (The show has great fun with the idea that while her new friends may be tricky goofballs, her old co-workers are practically hell-born demons.) And she's not unhappy because she doesn't yet have another boyfriend. Rebecca has been most unhappy during the times when she has been so hyperfocused on her love life as the only lever that can move her interior world that she misses the fact that she's creating a fresh family for herself in California including Greg and Paula and her boss Darryl (Pete Gardner), whose unexpected and funny story has picked up in recent weeks. She's winning where she's not looking.

It's as if Rebecca bought a dilapidated house so she could grow pineapples outside. And even though it turned out she couldn't grow pineapples, she fixed up the house beautifully, only to spend all her time staring out the window and being sad about failing.

What originally looked like a story about a cringe-inducingly unwise pursuit has become a story about the fact that people play different roles in your life at different times. No relationship is devoid of context — that's part of what "timing is everything" means. Crazy Ex-Girlfriend has become a goofy, but often a quite touching, story about the ways we all meet each other imperfectly because we're all so imperfect. Greg has his own hangups, Paula gives Rebecca perhaps too much of the encouragement she needs ... everybody messes up, but everybody is important. In fact, you can look with your head tilted at times and see that Greg is getting from Rebecca some of what Rebecca gets from Josh — his attachment to her is partly about her but also partly about what he, as a frustrated sad sack, needs because of where he is. Rebecca is needy, but honestly, everybody is needy.

It really is a story about happiness. It's using serialized television in an ambitious way to explore what it means to try to be a happy person. Those are the stakes. Not national security, not violence, not war — the stakes are individual quests to be happy within ordinary lives. And the show has been willing, along the way, to make everybody seem unappealing at times, and also unappealing to each other. It values friendship on par with romantic love if not above it, it recognizes the winding paths that most people find themselves on at some point, and there are almost never unambiguously perfectly happy developments. Almost everything on the show — like almost everything in real life — is open to legitimate questions about whether it's a good idea or not.

A lot of us, I would venture to say, have had a Josh Chan. Not a person we pursued across the country, but a person who both is special on his or her own terms and is the right person in the right place at the right time to nudge us along, sometimes for reasons we ourselves don't immediately spot. I'm not sure I've ever seen a TV show commit itself so fully to digging around in these ideas about compatibility (romantic and platonic) and how being useful to other people in a way that may prove impermanent isn't necessarily negative or incompatible with real emotion.

For a show with so many novelty songs, it's thinking pretty hard.

This piece originally said Greg was a barista; he's a bartender. Not everything, it turns out, is coffee.