Accessibility links
Police Radio Chatter Is Open To All Ears. But Should It Be? Why are police radio communications in the U.S. open for the public to hear? Some say this creates a weakness when confronting terrorist attacks, but others say it's important for police transparency. 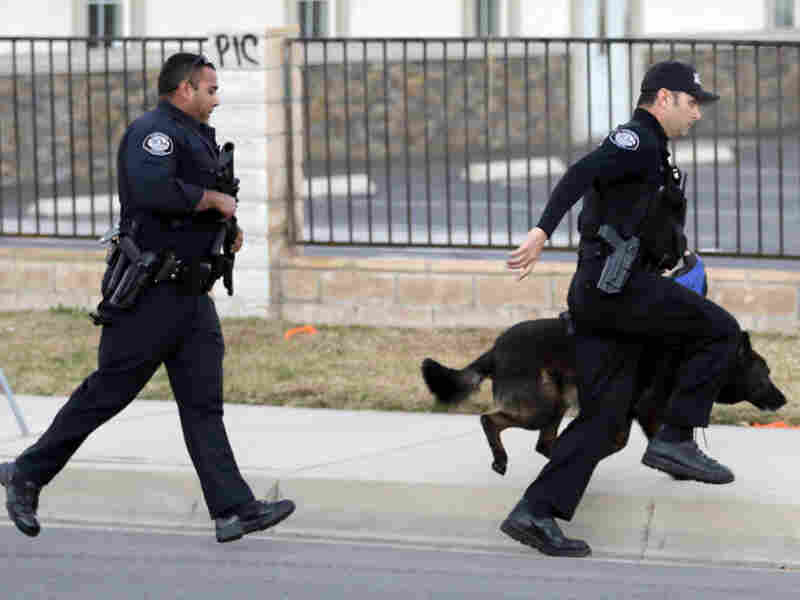 Authorities search for a suspect following the shooting that killed 14 people on Dec. 2, 2015, in San Bernardino, Calif. The public was able to follow the manhunt by listening to police radio communications streaming online. Chris Carlson/AP hide caption 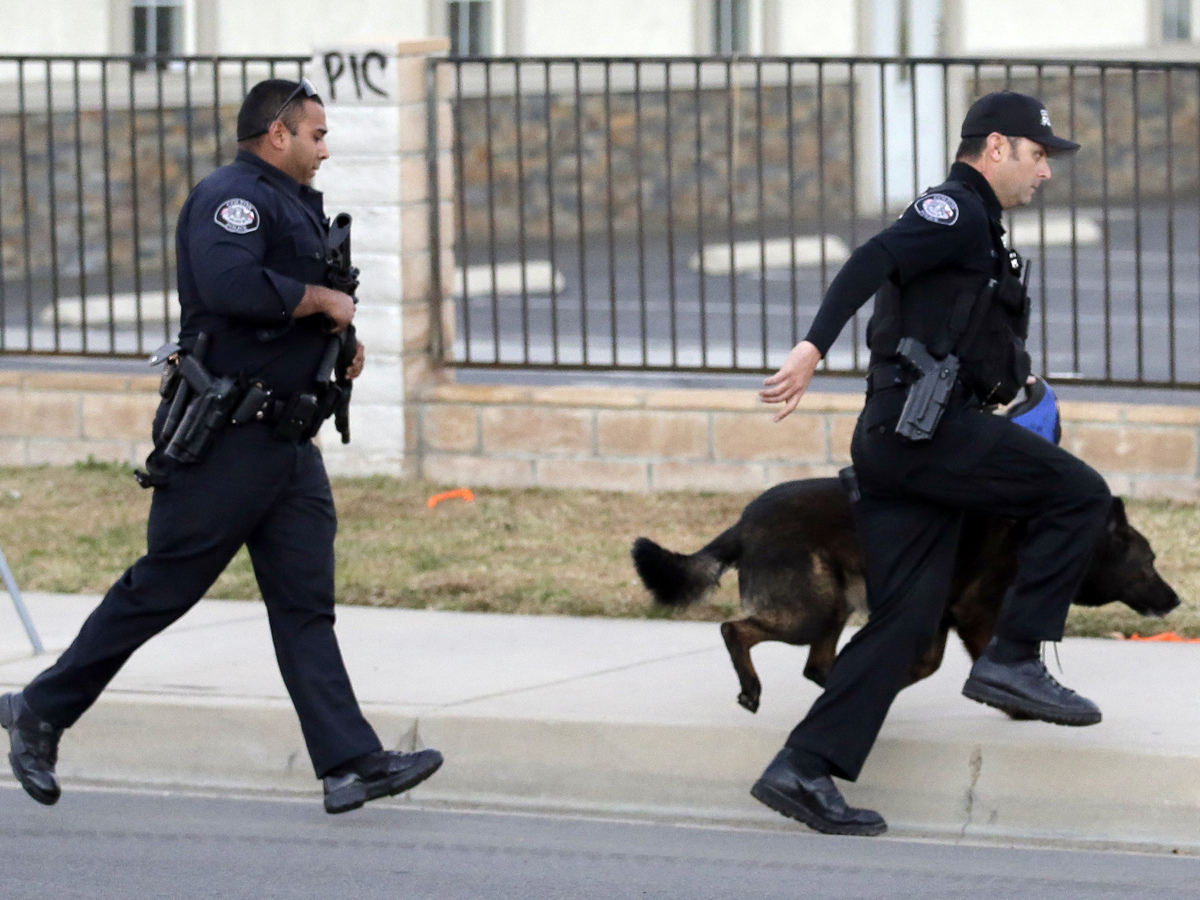 Authorities search for a suspect following the shooting that killed 14 people on Dec. 2, 2015, in San Bernardino, Calif. The public was able to follow the manhunt by listening to police radio communications streaming online.

Last week's terrorist attacks in Brussels have police in the U.S. reviewing their own preparedness, especially for the threat of multiple, coordinated attacks.

One question that often comes up is radio communications. In America, unlike Europe, most police radio chatter is on open frequencies.

During the Dec. 2 terrorist attack in San Bernardino, Calif., for instance, the general public was able to follow the drama of the manhunt by listening to police radio communications that were being streamed online.

"Our radio traffic was playing out real time across the nation," said San Bernardino police lieutenant Mike Madden during a recent legislative hearing about the attack. "It was being broadcast live ... for all to hear, including potential suspects who are now being made aware of what law enforcement actions are."

It's not a new complaint. During the multiday manhunt following the 2013 Boston Marathon bombing, police became so worried about the public listening to their movements that they asked that their radio stream be taken down from Broadcastify.com, a website that streams radio communications from about 5,700 emergency services. The company complied, though CEO Lindsay Blanton calls it a "pretty extraordinary circumstance."

"Other than that, agencies understand that what we do is legal, and there's not much pushback," Blanton says.

Some police agencies have decided to encrypt their radio transmissions, but Blanton says it's hardly a rush. Every year a few more agencies turn on encryption, he says, but he estimates it's still only about 10 to 15 percent of law enforcement agencies in the U.S. that have "gone silent."

Encryption costs money, especially when it means buying new radios, which can cost thousands of dollars per unit. There's also a technical challenge in figuring out "interoperability" — how to stay in touch with other departments and agencies, especially if they're using different systems.

Jim Bueermann, a former police chief who now heads up the Police Foundation, says he almost never encountered a situation in which open radio communications put him in danger or compromised the work during his three decades as a police officer. He says officers already have more secure ways of sharing sensitive information — cellphones and group texts — and he thinks there's value in keeping a police department's broader communications out in the open.

"People who are generally supportive of the police want to listen to what's going on, and it gives them a sense of what officers are involved in," he says. During the San Bernardino terrorist attack, he said he was one of the people listening to the radio chatter. "You could hear the stress in the officers' voices, and it just gave you a much better appreciation for what they were going through."

Bueermann notes that at one point, the terrorism suspects' home address in nearby Redlands, Calif., was read out over the radio. If anything was going to compromise the police operation, he says, that information would have. But it didn't.

"I don't think we've seen at this point the kind of sophistication at the terrorist level where listening to the radio traffic would have made that much difference," he says.

A future terrorist attack in the U.S. might exploit the open radio communications of the police, but he says that possibility has to be weighed against what he sees as the importance of maintaining transparency in how police do their jobs.