Accessibility links
Murder And Crows In 'Taxidermist's Daughter' Kate Mosse's new gothic thriller uses the concept of taxidermy as a clever skeleton on which to hang its scares. It's a dark and tangled tale that's definitely not for the squeamish.

Murder And Crows In 'Taxidermist's Daughter'

Murder And Crows In 'Taxidermist's Daughter' 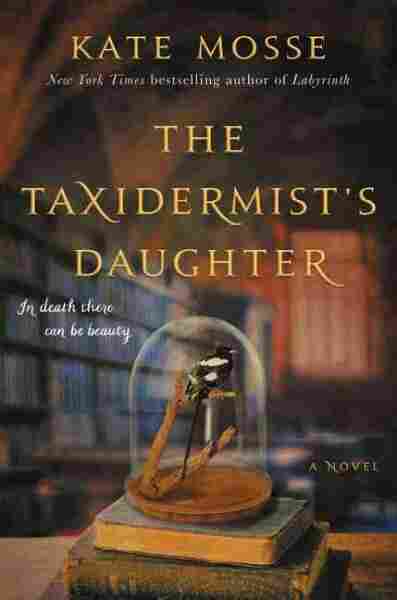 A colony of jackdaws. A tiding of magpies. A storytelling of rooks. A murder of crows. These whimsical collective nouns roost at the heart of Kate Mosse's new gothic thriller, The Taxidermist's Daughter. Posing the dead as living creatures has an honored place in the psychology of horror, from Norman Bates' stuffed critters in Psycho, to his real-life forerunner, Ed Gein, the mad taxidermist of deepest, darkest Wisconsin. Mosse employs taxidermy as a clever device over which to drape the skin of her story.

The novel opens in 1912, in the dark, rainy graveyard of a village in Sussex, England. Soon, we see the titular taxidermist's daughter preparing a jackdaw to be stuffed. Though it's less than likely that a young woman of the era would be engaged in such a process, 22-year-old Constantia Gifford seems to know exactly what she is doing. "Gently Connie laid the bird down on the paper," Mosse writes. "With her fingers, she parted the sooty feathers and lined up the blade at the top of the breast bone."

Connie is guided by a real handbook, excerpts from which precede each chapter: Taxidermy: Or, the Art of Collecting, Preparing, and Mounting Objects of Natural History, by one Mrs. R. Lee, published in London in 1820. The quoted passages are full of such gems as the description of a naturalist who "after skinning them, contented himself by cutting the birds longitudinally in two, and filling one half with plaster ..." You get the drift.

It must be said that Daughter is not for the squeamish, or anyway those for whom taking apart and sewing together animals — including humans — seems a bit "ooky" (as Annie Wilkes in Stephen King's Misery might describe it).

Several mysteries crowd Mosse's plot, but the principal one originates in the amnesia Connie has suffered since she took a tumble down a flight of stairs at the age of 12. Except in fleeting glimpses, she has never been able to reconstruct events that took place before the fall dented her skull. The motherless girl yearns to reclaim her past. Her shreds of memory all involve a mysterious person named Cassie, and it Connie's determined goal to discover who Cassie was and what has become of her.

If you happen to be a little bird phobic, if you can't stay in the room for a showing of Hitchcock's 'The Birds,' this might not be the book for you.

Complicating her quest are several additional puzzles. Gifford, the taxidermist father, has unaccountably disappeared. So has the doctor father of Connie's love interest, an aspiring painter named Harry Woolston. And a murdered woman's corpse has washed up in a stream by Connie's abode, Blackthorn House. There is some backstory here that I found intriguing: Once upon a time the world applauded "Gifford's World Famous House of Avian Curiosities." Then, after Connie's childhood accident, her father lost his good name and his fortune, leaving him a "broken and dissolute man, ruined by drink." The idea of a museum of stuffed creatures elevating its owner to the heights of fame is a fascinating one, and I would have liked to see Gifford step further out of the shadows.

The atmospheric nature of the environs on the Fishbourne Marshes, at the edge of the sea, lends Mosse's story an unremittingly melancholy tone. From the marshes, "isolated and exposed," rises the "warm red brick" mansion with a long, light-suffused conservatory, which father and daughter use as their workshop. They "live a solitary life on the other side of the creek, in a house filled with fur and tow, all that is left of Gifford's once celebrated museum of taxidermy."

The birds Gifford and Connie are devoted to, however, pop up throughout the book, alive as as well as dead, flapping and squawking and hunching on every eave. A maid croons the nursery rhyme "Who Killed Cock Robin?" Gulls and curlews shriek. A "cloud of small birds" bolts from a church, "striking hats and graves and the stones in their desperation to be free." Most notable are the black birds, the jackdaws and magpies, rooks and crows that lurk around every corner.

If you happen to be a little bird phobic, if you can't stay in the room for a showing of Hitchcock's The Birds, this might not be the book for you. But some people can't get their fill of our feathered friends, even the dead ones. We have to remember that John James Audobon, perhaps the greatest ornithologist of them all, did not draw from life. He not only stuffed the birds he shot; he ate their meat.