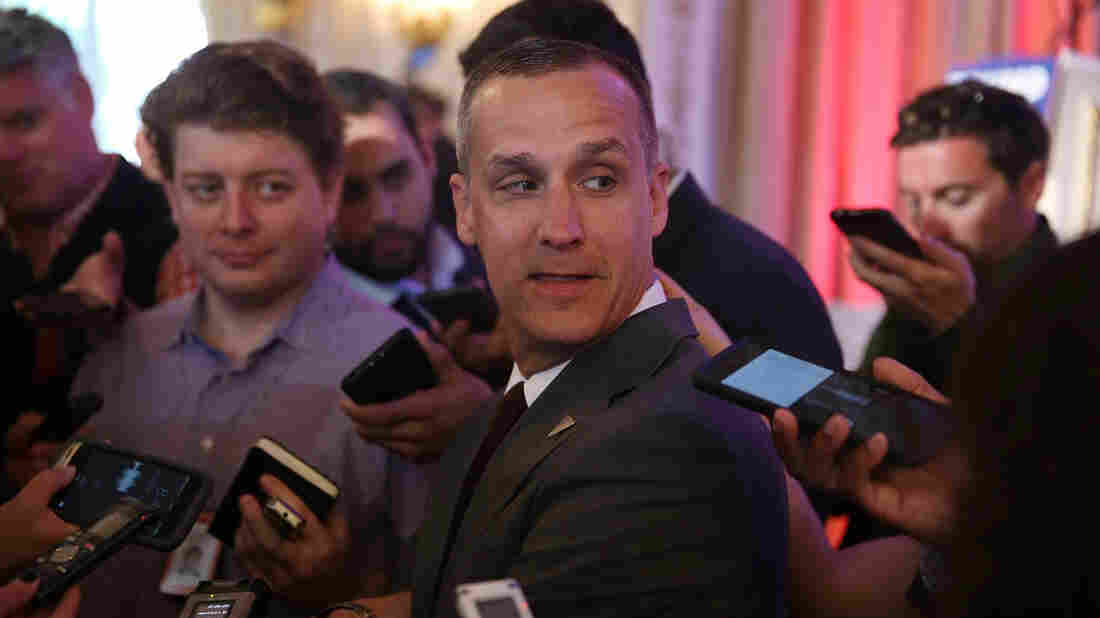 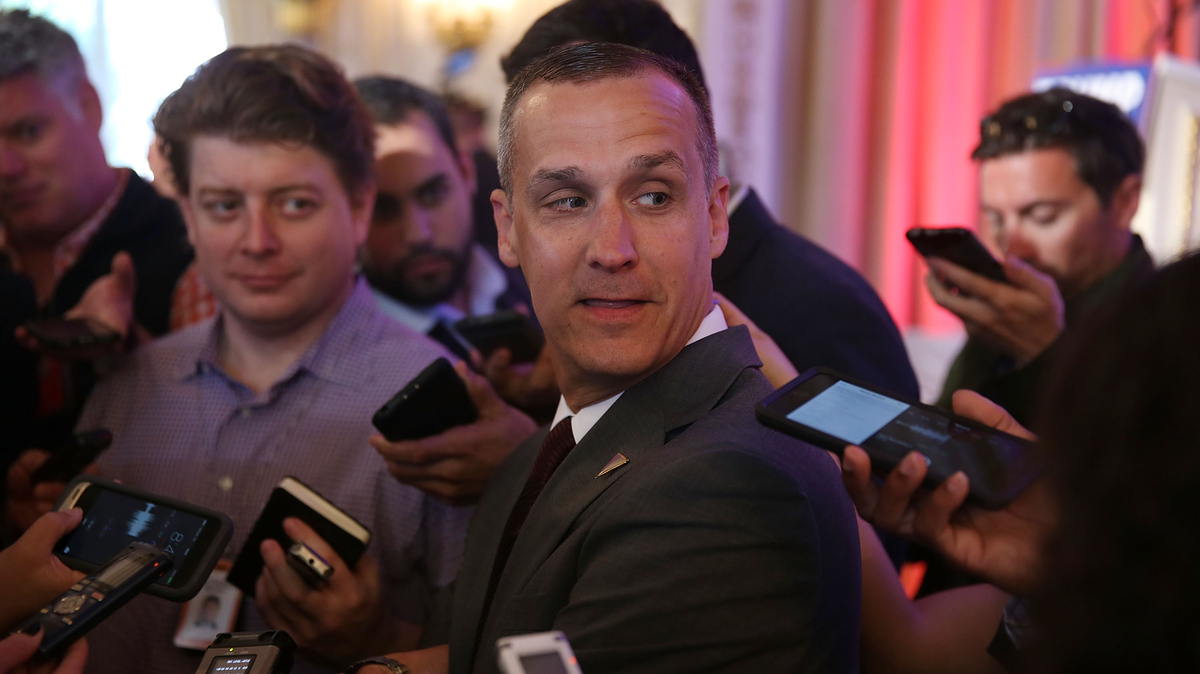 Corey Lewandowski is charged with one count of simple battery.

According to the arrest report, the reporter, Michelle Fields, told police that she asked Trump a question after the March 8 event, as he was making his way toward the exit of the ballroom at the Trump National Golf Club, and felt someone "yank her left arm." She then asked a Washington Post reporter standing nearby "if it was 'Corey' who grabbed her." The Post reporter, Ben Terris, confirmed it was Lewandowski who had grabbed her arm.

(Sections of the report containing contact information have been redacted by NPR above).

The police report says Fields showed an officer her arm "which revealed bruising from what appeared to be several finger marks indicating a grabbing type injury."

Lewandowski has previously denied involvement in the incident, calling Fields "totally delusional" in a tweet:

@MichelleFields you are totally delusional. I never touched you. As a matter of fact, I have never even met you.

However video tape released by the Jupiter Police Department appears to show Lewandowski grabbing Fields as she walked along side Trump. Lewandowski has agreed to a court appearance on May 4.

Speaking to reporters on his plane in Wisconsin, Trump backed his campaign manager, saying Lewandowski was "very seriously maligned," and said he would remain in his job. "I don't discard people," Trump said.

Trump also claimed Fields grabbed him, and he disputed the charge that Lewandowski bruised Fields, saying "wouldn't you think she would have yelled out a scream if she had bruises on her arm?" He said Fields could have had the bruises before the incident with Lewandowski. "How do you know those bruises weren't there before?"

Trump tweeted Tuesday that the "tapes" (other views of the scene had circulated previously) showed "nothing there":

Wow, Corey Lewandowski, my campaign manager and a very decent man, was just charged with assaulting a reporter. Look at tapes-nothing there!

Why aren't people looking at this reporters earliest statement as to what happened, that is before she found out the episode was on tape?

"Mr. Lewandowski was issued a Notice to Appear and was given a court date. He was not arrested. Mr. Lewandowski is absolutely innocent of this charge. He will enter a plea of not guilty and looks forward to his day in court. He is completely confident that he will be exonerated."

Trump had weighed in earlier this month as well, saying: "This was, in my opinion, made up. Everybody said nothing happened. Perhaps she made the story up. I think that's what happened."

Fields resigned from her Breitbart post after the incident, saying the news outlet had not stood behind her. Fields' resignation was followed by that of Breitbart editor-at-large Ben Shapiro, and a handful of other employees who alleged the conservative news outlet was more protective of the Trump campaign than of Fields. The conservative news site also printed a story saying that the altercation "could not possibly have happened as Ben Terris reported." and that "given the similarity in appearance between Lewandowski and the security official, and given the fact that Lewandowski was walking on the other side of Trump from where Fields was at the time, the possibility of mistaken identity cannot be ruled out." The editor who wrote that piece, Joel Pollak, tweeted that given the new video, "I was wrong."

Based on the evidence available at the time with no video and weak description. Clearly I was wrong; @bterris right. https://t.co/LrPnS7b5DC

Trump's presidential rivals were quick to tie the alleged incident to the campaign's culture. According to The Hill, Ted Cruz told reporters in Wisconsin "This is the consequence of the culture of the Trump campaign, the abusive culture, when you have a campaign that is built on personal insults, on attacks and now, physical violence." John Kasich's campaign adviser John Weaver tweeted that Lewandowski "would have been fired long ago" if he was working for the Kasich campaign.

Campaigns reflect the values of the candidate. I know ours does. If this bully worked for John Kasich, he would have been fired long ago.

Shortly after the alleged incident with Fields, Lewandowski was back in the news after a video appeared to show him grabbing a protester's shirt collar at a rally in Arizona. In that video, a member of Trump's security detail can also be seen reaching for the shirt — the campaign said it was that man who yanked the protester, not Lewandowski.