Accessibility links
Lurid And Ludicrous, 'Shock SuspenStories' Will Make Your Eyes Pop A new collection reprints the first six issues of EC Comics' classic 1950s pulp horror series. Packed with gore and goofiness, these may, in fact, be the comics your mother warned you about.

Lurid And Ludicrous, 'Shock SuspenStories' Will Make Your Eyes Pop

Lurid And Ludicrous, 'Shock SuspenStories' Will Make Your Eyes Pop 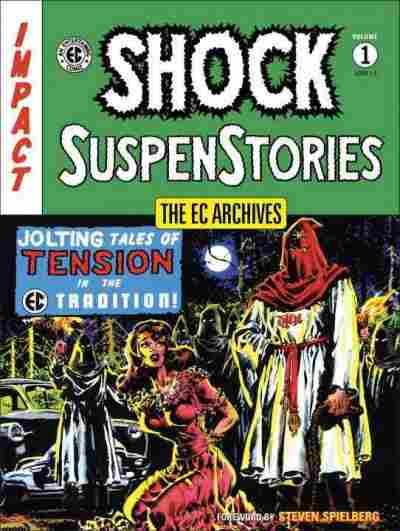 What's the deal with EC Comics, anyway? In the modern crusade to improve comics' reputation and win a place alongside "legitimate" art, this defunct early-'50s publisher would seem like a poor ambassador. EC's offerings were unapologetically lurid and just as unapologetically ludicrous. "Brace yourselves for the impact of the shocking wind-up to this yarn!" bellows the first story in Dark Horse's collection of the EC title Shock SuspenStories. In it, a woman cuts her husband into tiny pieces and labels them in jars. A later story features a woman flogged to death; its introduction reads, "Here is an electrifying story with solid impact in its startling conclusion!" Baaa-dump.

In fact, the tales in Shock SuspenStories aren't all that shocking. Publisher Bill Gaines and his editor Al Feldstein returned repeatedly to similar tropes in such titles as Tales From the Crypt, Two-Fisted Tales and Weird Fantasy. In Shock SuspenStories the favorite outcome is poetic justice of the gory variety. A brutish lumberjack, having beaten a rival until he blinds him, is later hacked to death with an axe unknowingly wielded by the blind man. The cruel boss of an orphanage, refusing to let the kids celebrate Halloween, has his head turned into a jack-o-lantern. An avid hunter, his lodge decorated with a bearskin rug, is himself made into a human-skin rug.

Tales like these are even more puerile than the typical low-budget horror movie. It's not too surprising that, a few years after EC began publishing, it became the focus of Congressional hearings and comic-book bonfires. All these years later, though, the censors look like jerks. This edition of Shock SuspenStories (notably, with a forward by Steven Spielberg) is only the latest of a raft of collector's volumes issued by different publishers recently. In 2007 an all-new Tales From the Crypt comic appeared, and 2013 saw biographies of illustrator Wally Wood and editor/writer/artist Al Feldstein.

It's not too surprising that, a few years after EC began publishing, it became the focus of Congressional hearings and comic-book bonfires. All these years later, though, the censors look like jerks.

Part of the secret is the art; EC hired some of the top commercial freelancers of the day. In these pages Wood displays his gift for eloquent faces and clever layouts, Jack Davis presents gnarled visages and twisted forms, and Joe Orlando shows off a brilliant palette and angelic female features. Jack Davis and Graham Ingels are less remarkable, but it's fascinating to see how each artist defines himself using such ridiculous raw material.

At least, it's mostly ridiculous. From time to time Gaines and Feldstein published serious or semi-serious work, as when they illustrated Ray Bradbury stories. They also took on the issues of the day — albeit ones that lent themselves to violence and gore. "The Patriots!," drawn by Davis, depicted violence at a political rally; it could almost be about our current election season. The Wood-illustrated "The Guilty!" concerns racist violence in a small town. By the time it ran, in the third issue, the editors knew their work mattered to readers out there. "I have always felt, somehow, that EC mags are 'personally mine,'" wrote Ruby MacDonell of Raleigh, N.C., in one letter printed in SuspenStories 4.

Such letters point to the final ingredient of EC's appeal through the years: It provided a sense of belonging stemming from a shared experience of culture. It's no accident that Mad magazine was first published by EC. Gaines and his crew stumbled onto a mixture of humor, horror, melodrama and sheer absurdity that not only spoke to people, it made people feel they were one of a select group who "got it." Strikingly, Playboy, with its complex promise of masculine camaraderie, was founded about the same time. But you didn't need a pricey lifestyle to belong to EC's world. You didn't even need to be a man (though it's true that women are rarely treated well in the comics). You just had to be attuned to Gaines and Feldstein's unique frequency. You had to know that when they had one of their creations chew off his own leg to escape a bear trap, another get his innards removed because he kept telling his underlings they "got no guts!" and a third chop up his wife and squish her parts into model-train cars, they were kidding. Mostly.