Accessibility links
'Empire Of Things' Surveys How, What And Why We Consume Frank Trentmann's sprawling new history looks at several centuries worth of consumerism. It's a huge, and hugely readable survey of all the ways we accumulate — and exhaust — material goods.

'Empire Of Things' Surveys How, What And Why We Consume

'Empire Of Things' Surveys How, What And Why We Consume 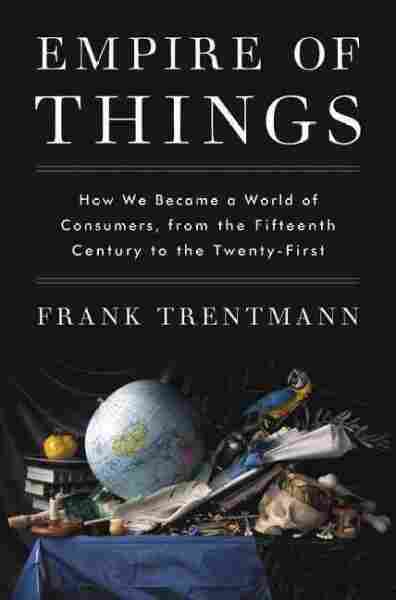 How We Became a World of Consumers, from the Fifteenth Century to the Twenty-first

Title
Empire of Things
Subtitle
How We Became a World of Consumers, from the Fifteenth Century to the Twenty-first
Author
Frank Trentmann

Food, clothing, and shelter: How have these three basic necessities been inflated into a culture of consumption that now threatens to deplete the resources of the planet that gives us life? That's the question at the heart of Frank Trentmann's new book, Empire of Things. Trentmann has the bona fides to back up his exhaustive probe into consumerism: He's a decorated academic and the award-winning author of Free Trade Nation: Commerce, Consumption, and Civil Society in Modern Britain and The Oxford Handbook of the History of Consumption. With Empire of Things, however, he's tackled a bigger project: synthesizing his many years of research and thinking into a single, comprehensive overview of how humans have accumulated — and exhausted — material goods throughout history.

It's an enormous undertaking, and the size of the book reflects that. It's huge. Thankfully it's also hugely readable. Combining a dizzying array of disciplines — economics, psychology, sociology, ecology, anthropology, religion, geopolitics, and even etymology — Empire deftly juggles a colossal load. The roots of the word "consume" are unearthed — including its transition from negative to positive somewhere around the Industrial Revolution — even as every conceivable angle of the idea of consumption is taken, turned, and reexamined. But Trentmann's savvy enough to dig up characters and tell stories.

In the Mughal Empire, in what is now parts of India and Afghanistan, rulers were collectors rather than consumers, a function of class that came with a profound, still resonant distinction between artisan-made goods and mass production. Trentmann paints the hunger for novel goods and services as not a symptom of the Industrial Revolution, but a preexisting impulse that helped drive it. And he gives the consumerism of 20th century a fresh perspective, from the way popular jazz songs in England in the 1930s reflected the rise of home ownership to the way teen magazines in the 1950s were demographic bellwethers. In one particularly eye-opening section, Trentmann outlines the debate over consumption and waste as it played out in the works of pop artists and avant-garde architects.

It's an enormous undertaking, and the size of the book reflects that. It's huge. Thankfully it's also hugely readable.

One of the book's biggest strengths is its geographical scale. Empire doesn't just stick to England, America, and the rest of the Western world. The rise of Asian consumerism is given all the attention it demands, including many illuminating facts and concepts. For instance, the Japanese notion of shōhi wa bitoku or "virtuous consumption" — that is, purchasing domestic goods as a form of moral duty — that helped the nation become an economic superpower following World War II.

At the same time, Trentmann acknowledges that xenophobia and other adverse social forces have always had a fluid relationship with markets, particularly importation and the desire for the exotic: "That foreign things will corrode local identity is a fear as old as trade itself," he writes, and he persuasively shows how it's as true today as it was 500 years ago.

It's inevitable that a book of such scope winds up with a few flaws. For all its winning approaches — the interplay between comfort, convenience, and status; the role of welfare as an economic engine; an emphasis on everyday life as a microcosm of the world at large; the downside to the conservation and fair-trade movements — Empire occasionally lapses into textbook-speak. And the occasional clump of statistics, while supporting his points, doesn't always help. Maybe it's just a symptom of size, but Empire's coverage of e-commerce and how it's radically altered consumerism in the 21st century feels relatively skimpy; his assertions that "the internet has added a new layer, not created a revolutionary break" and "new technologies don't automatically replace existing patterns of use" don't carry as much conviction as the rest of the book.

Trentmann's agenda, on the other hand, is very convincing. As he states at the start, he has his own "moral point of view," and it becomes crystal clear as the book progresses: He's an advocate for sustainability. And a powerful one at that. By tracing the trend lines of use and waste over the course of centuries, he lays out an airtight argument: The planet simply can't bear our current rate of consumption. Trentmann's balanced, even-handed arguments only make that truth more frightening. His message is simple: without a lucid, comprehensive understanding of the history of consumption, we'll never make it out of this mess going forward. Empire of Things isn't just an insightful and surprisingly entertaining read, but a crucial one.