Accessibility links
Prankster For President: Yetta Bronstein — Why Not? Yetta Bronstein ran on a platform of national bingo and mink coats for all. So why don't you know her? Well, because she was fake. But the married pranksters behind Bronstein won't let you forget her. 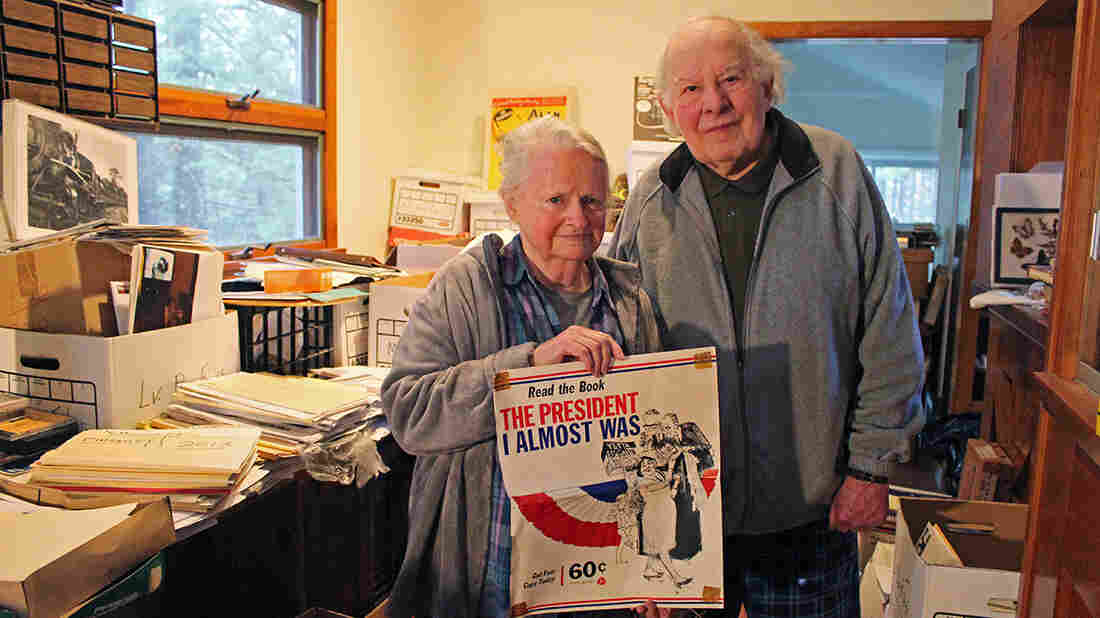 Jeanne and Alan Abel in their home in Southbury, Conn. Alletta Cooper for StoryCorps hide caption 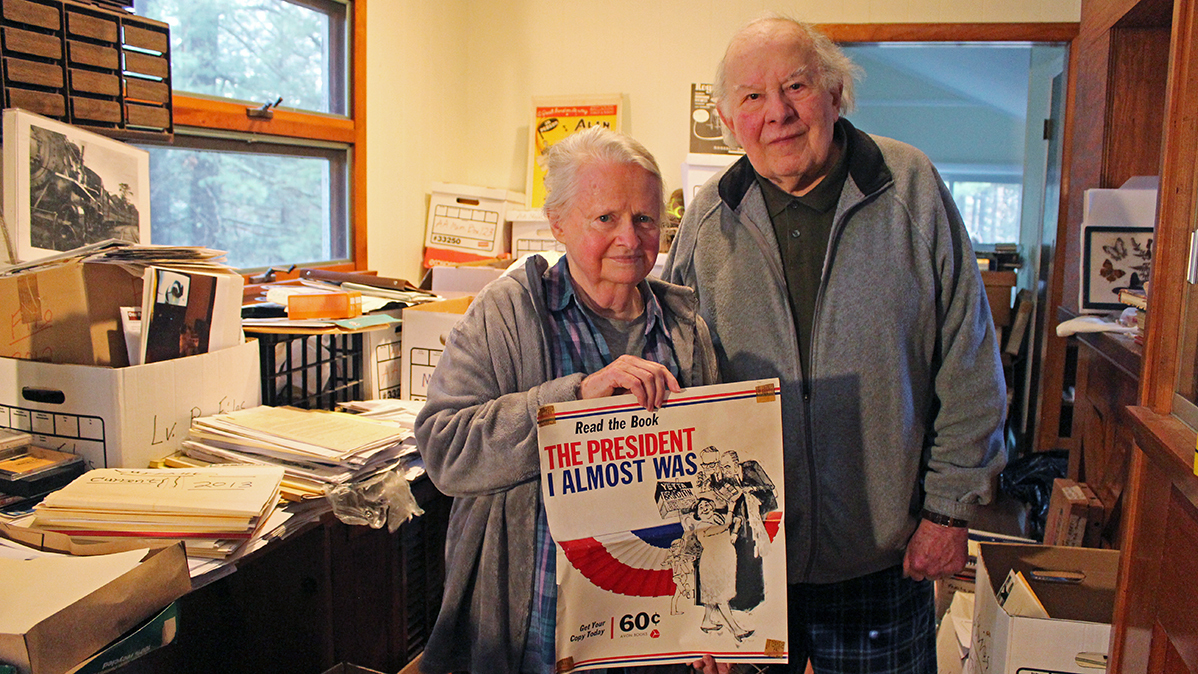 Jeanne and Alan Abel in their home in Southbury, Conn.

At least, she was a presidential candidate — kind of. In the 1960s, a pair of professional pranksters, husband and wife Alan and Jeanne Abel, orchestrated an election-year hoax with Bronstein, a politician as much as she was a fiction.

"Yetta Bronstein lives in the Bronx. She has a boy named Marvin. He plays the drums, badly," recalls Jeanne. "And one day she decides to run for president!"

Bronstein ran as an independent write-in candidate in 1964 and '68, leading a political party known as the Best Party. Her platform included national bingo.

It was Jeanne Abel who would act as Bronstein in interviews with reporters, while Alan stood in as her campaign manager.

"I got a lot of press," Jeanne says. "I only appeared on radio because I was then only in my 20s and I was blond and not a Jewish mother."

Of course, this gave rise to a question: What exactly does Yetta Bronstein look like? For that, Alan had a ready solution. He gave everybody a photo of his mother. 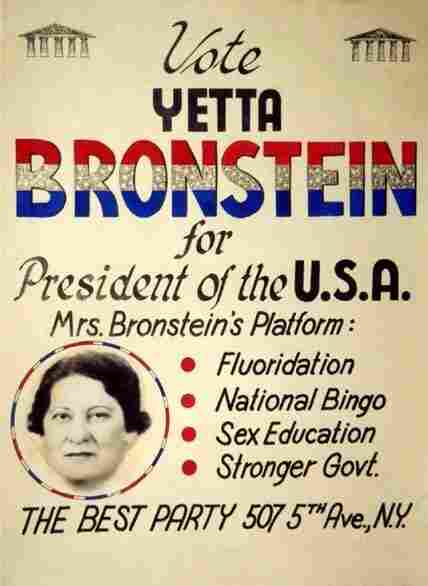 In '64, they prompted some followers to head to New Jersey, where Democrats were holding their national convention in Atlantic City. Alan says they managed to convince about 20 people to come out and march with them, bearing signs that read "Vote for Yetta" and "Things Will Get Betta."

And besides widespread bingo, the political platform of candidate Bronstein was a little, well, revolutionary for voters at the time.

"You remember, you wanted them to be able to vote twice," Alan says. "You wanted to take Congress off salary and put them on straight commission. Allow guns in homes but decrease the velocity of bullets by 95 percent."

Bronstein ran behind the slogan: "A Mink Coat in Every Closet." And another: "If you want simple solutions, then you gotta be simple." When asked who would serve in her Cabinet, her reply was just as simple: "I'll have one."

She lost in a landslide, of course.

"They said I didn't win a single precinct," Jeanne says. 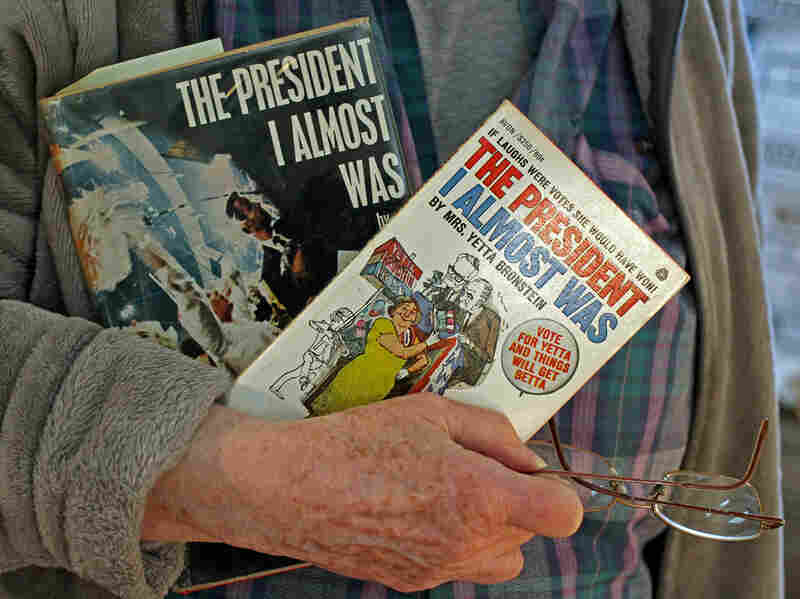 Jeanne Abel, holding the book she wrote as Yetta Bronstein, The President I Almost Was. Alletta Cooper for StoryCorps hide caption 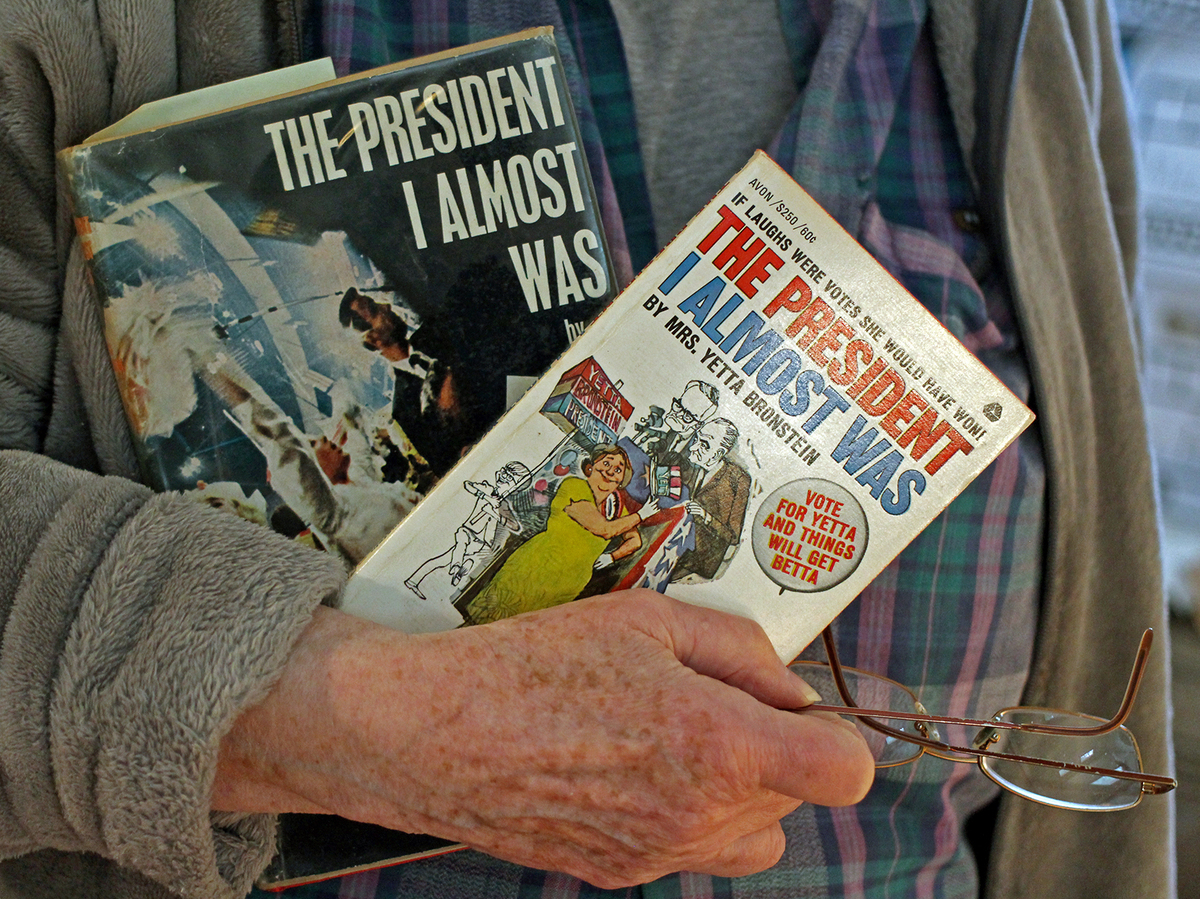 Jeanne Abel, holding the book she wrote as Yetta Bronstein, The President I Almost Was.

And that's not where Yetta Bronstein's prolific career of failure ended. Jeanne, writing as Bronstein, published the book The President I Almost Was in the U.S. and U.K. while gearing up for her '68 presidential bid. Bronstein also ran for mayor of New York City and Parliament in the U.K. — and she lost those elections, too.

Bronstein's campaign manager, Alan, didn't let his prankster career die, either. Though he was able to convince The New York Times that he died. In 1980, the paper ran an obituary for Alan Abel, who, as you can hear at the audio link above, is still very much alive. (The paper retracted it two days later — the first time the Times ever had to retract an obit.)

Still, it's Yetta Bronstein who endures, more than ever during the presidential campaign. Just don't expect her to jump into the race late.

"I don't think Yetta has a place in this particular election season," says Jeanne. "I mean, people have asked me, 'Don't you want to get in the race?' I said no, the comedy is already happening."

Audio produced for Morning Edition by Michael Garofalo. Special thanks to Andy Lanset at WNYC.