Accessibility links
Has Bernie Sanders Pulled Hillary Clinton To The Left? Sanders and his supporters are trying to change America, not the positions of another candidate. But his issues are helping to define the Democratic primary.

4:29
Has Bernie Sanders Pulled Hillary Clinton To The Left? 4:29 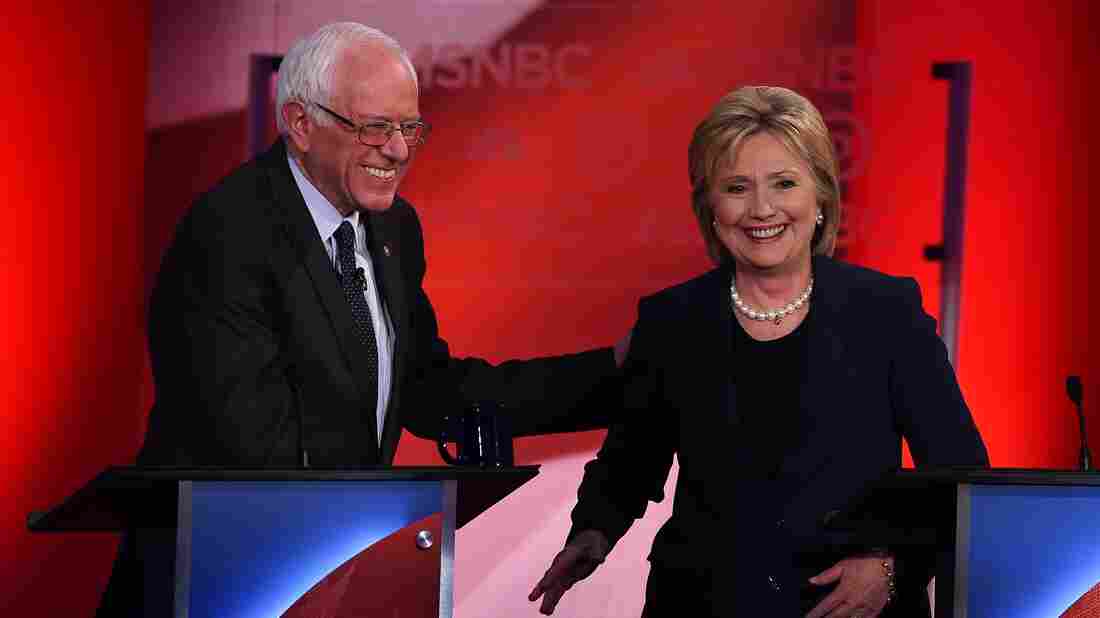 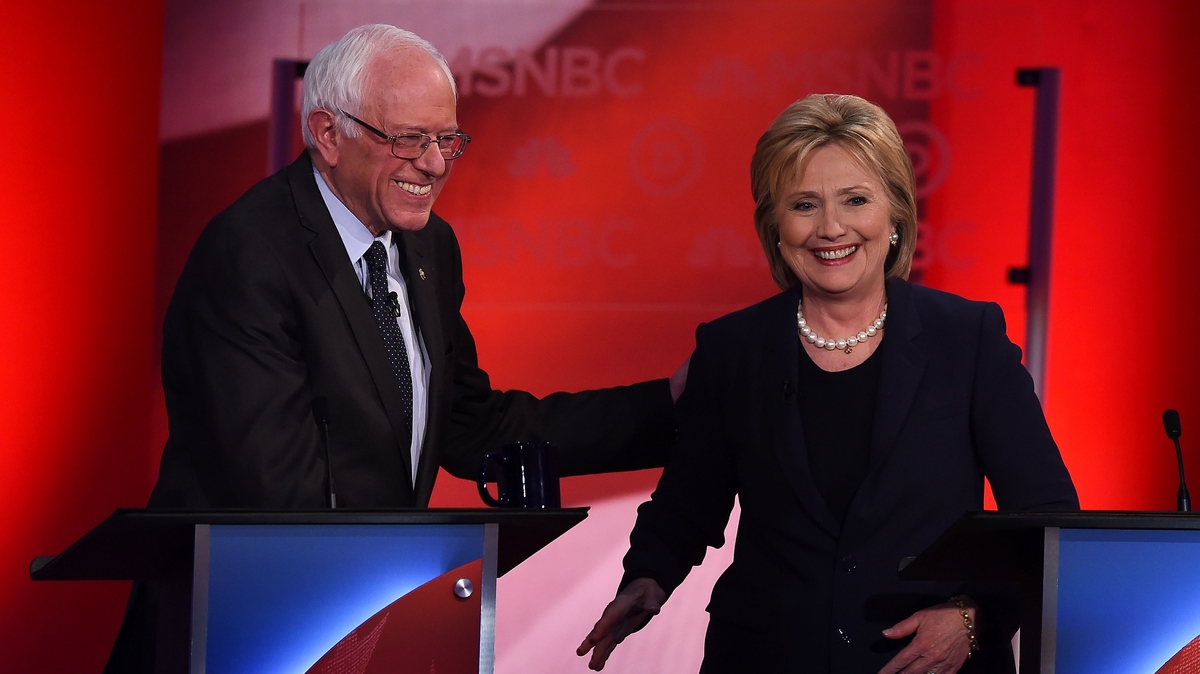 US Democratic presidential candidates Hillary Clinton (R) and Bernie Sanders smile after participating in the MSNBC Democratic Candidates Debate at the University of New Hampshire in Durham on February 4, 2016.

Bernie Sanders and his supporters don't consider moving Hillary Clinton to the left a goal or even really a victory of any kind. They want to change America, not the stated positions of another candidate. And while he may not be beating her in the delegate race at the moment, there's an argument that Sanders has already won by getting the issues he cares about into the political blood stream.

If Sanders hadn't been in the race, for example, would Clinton have taken a firm position on the Keystone XL pipeline, the minimum wage and the Trans Pacific Partnership, or TPP, Asia trade deal?

In the early weeks and months of the campaign, she was vague on all of them.

"I can't comment yet, because I haven't seen it," Clinton said last July in response to a question about her position on the trade deal.

Clinton had praised the deal in its early stages when she was secretary of state, but she spent the first six months of her campaign saying she couldn't weigh in without seeing the details of a final deal.

"I don't know if there have been enough changes," she said. "And I won't know until I actually see what's been negotiated."

Sanders repeatedly pushed her to take a stand.

"I kind of think people would prefer to hear what your position is," Sanders said in June. "Are you for it or against it rather than passing the buck and saying well in a sense, I have no position? That is not leadership."

Clinton didn't say she opposed TPP until October, after the White House announced negotiations were complete. That also happened to be a week before the first Democratic presidential debate — where trade likely would have been a much bigger issue if all the leading candidates hadn't suddenly been in agreement.

When asked, a spokesman for the Sanders campaign listed off several areas where Clinton has moved: trade, climate change, social security, Wall Street reform and the minimum wage. But Clinton's camp isn't buying it.

"No, I don't think he's pushed her," said pollster Joel Benenson, a Clinton strategist, on a conference call with reporters. "I think she has said repeatedly, she's a progressive who likes to get things done."

That well-worn phrase of Clinton's seems tailor made to draw a contrast with Sanders. But even before Sanders jumped into the race, Clinton hit more progressive populist notes than many liberal activists had expected.

"I think it's fair to say that, as you look across the country, the deck is still stacked in favor of those who are already at the top," Clinton said in her very first remarks of the campaign. "And there's something wrong with that."

Clinton went on to bemoan massive CEO wages, tax laws that favor hedge-fund managers, college tuition that families can't afford and said she would support a constitutional amendment to get unaccountable money out of politics.

"That was a real dog whistle to us," said Neil Sroka with Democracy for America.

He said the line about the deck being stacked seemed aimed directly at progressive activists like him. Democracy for America was among the groups that tried to draft Sen. Elizabeth Warren of Massachusetts to run and, now, it supports Sanders.

Sroka said the progressive wing of the Democratic party has had a far greater influence in the 2016 race than in past cycles, and Clinton has clearly adjusted her rhetoric to the moment.

"There's no doubt in my mind that," Sroka said, "Bernie Sanders' incredibly strong primary challenge, and the 'Run Warren Run' campaign that came before it, has all yielded a front-runner in this race who understands where the base of the Democratic party is and has tried very hard to work her way towards that base."

Sanders and the voters he represents have pushed Clinton to take firm positions. But she rarely meets Sanders all the way. Take college affordability — Clinton answered Sanders' call for free public college with a plan of her own for debt-free college.

On the minimum wage, early on, Clinton expressed support for the Fight for 15 campaign. But she resisted taking a position on what the federal minimum wage should be. Meanwhile, Sanders introduced a bill.

"All of our workers from coast to coast need at least 15 bucks an hour," Sanders said at a press conference outside the Capitol.

Eight days later, Clinton took a firm position on the federal minimum wage. She said it should be raised to $12 an hour.

"I think that it's going to be important that we set a national minimum, but then we get out of the way of cities and states that believe that they can and should go higher," Clinton said in response to this reporter's question.

Clinton threw her support behind a less ambitious bill than Sanders', but one with with significantly more co-sponsors.

Her reasoning? It was more politically practical.