Accessibility links
Frustrated With Campaign Rhetoric, Muslims Turn To Political Activism Muslim voters say they're disheartened with some GOP candidates' comments about their faith this presidential campaign. But, they're trying to turn that disappointment political engagement. 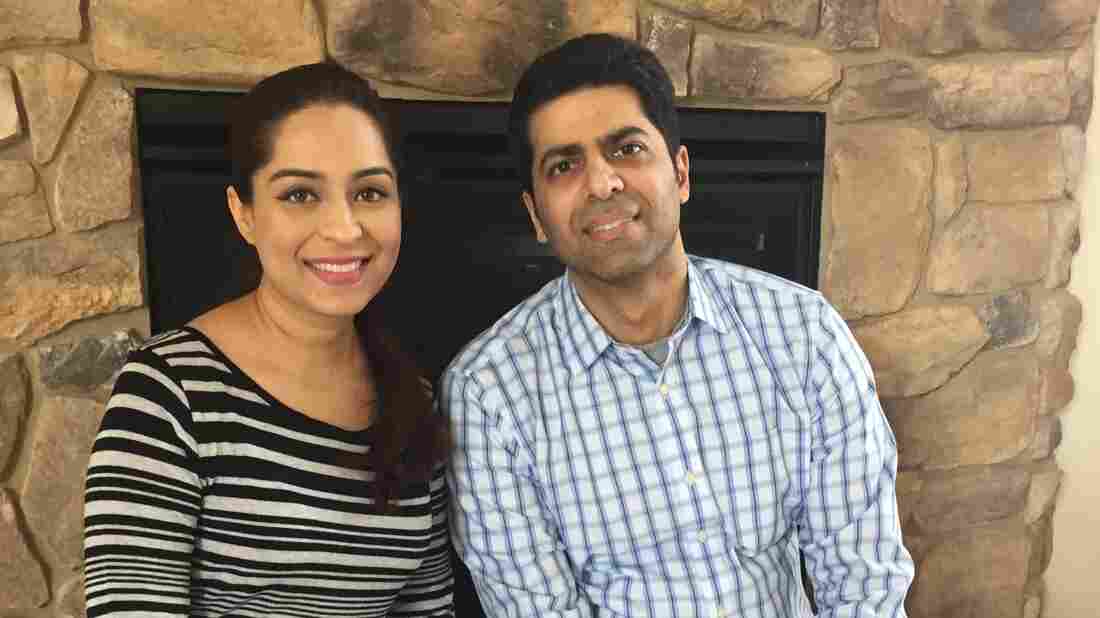 Asma Sukhera, 36, and her husband Minhaj Husain, 39, say they're appalled by the rhetoric about Muslims this campaign. "This election's coming across as a pick-your-poison election," said Minhaj. Asma Khalid /NPR hide caption 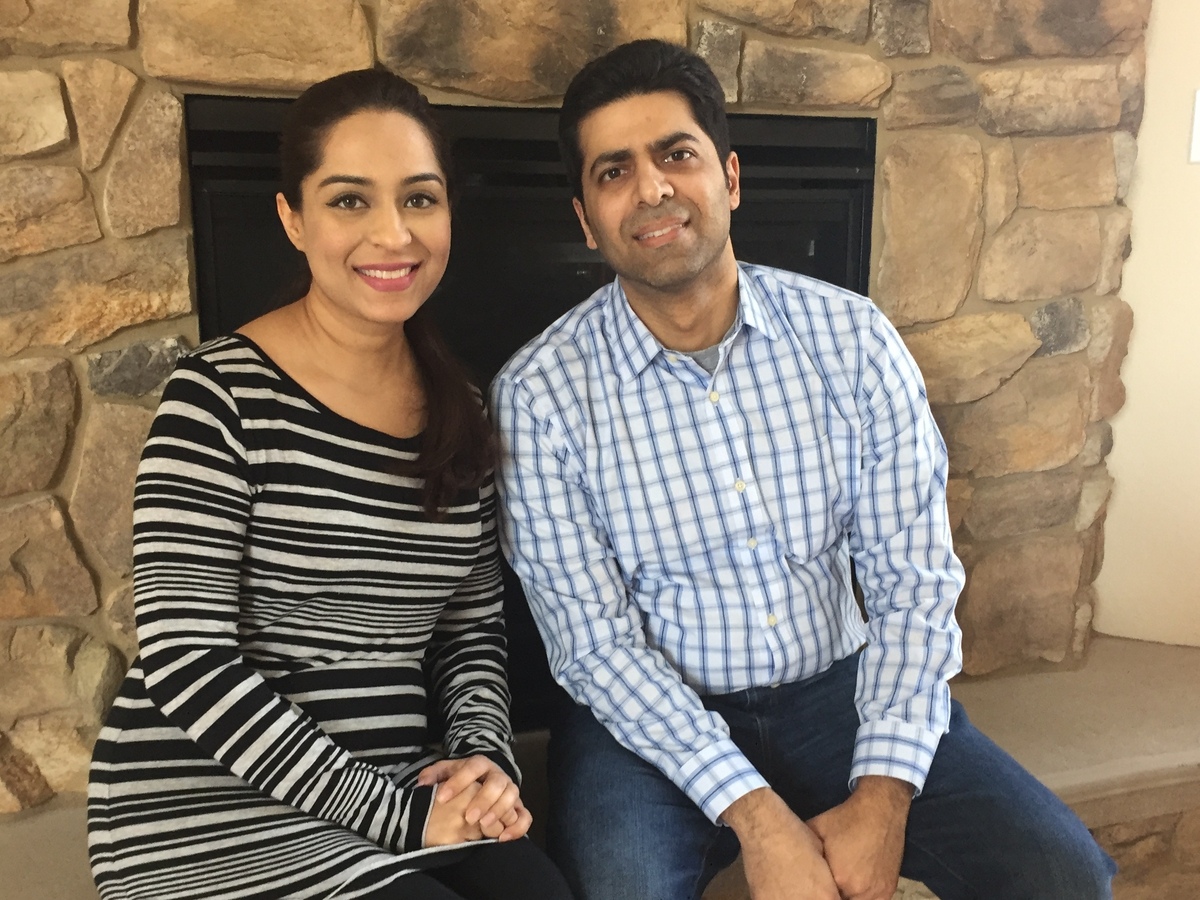 Asma Sukhera, 36, and her husband Minhaj Husain, 39, say they're appalled by the rhetoric about Muslims this campaign. "This election's coming across as a pick-your-poison election," said Minhaj. 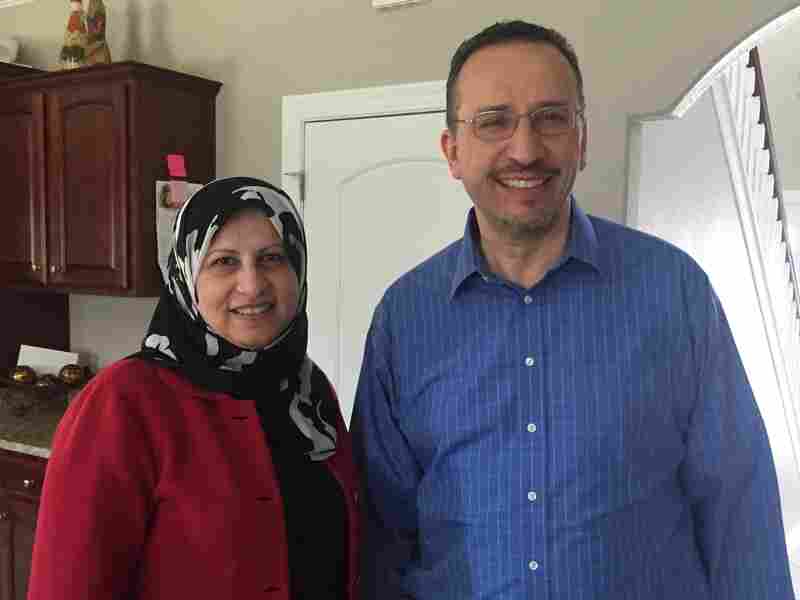 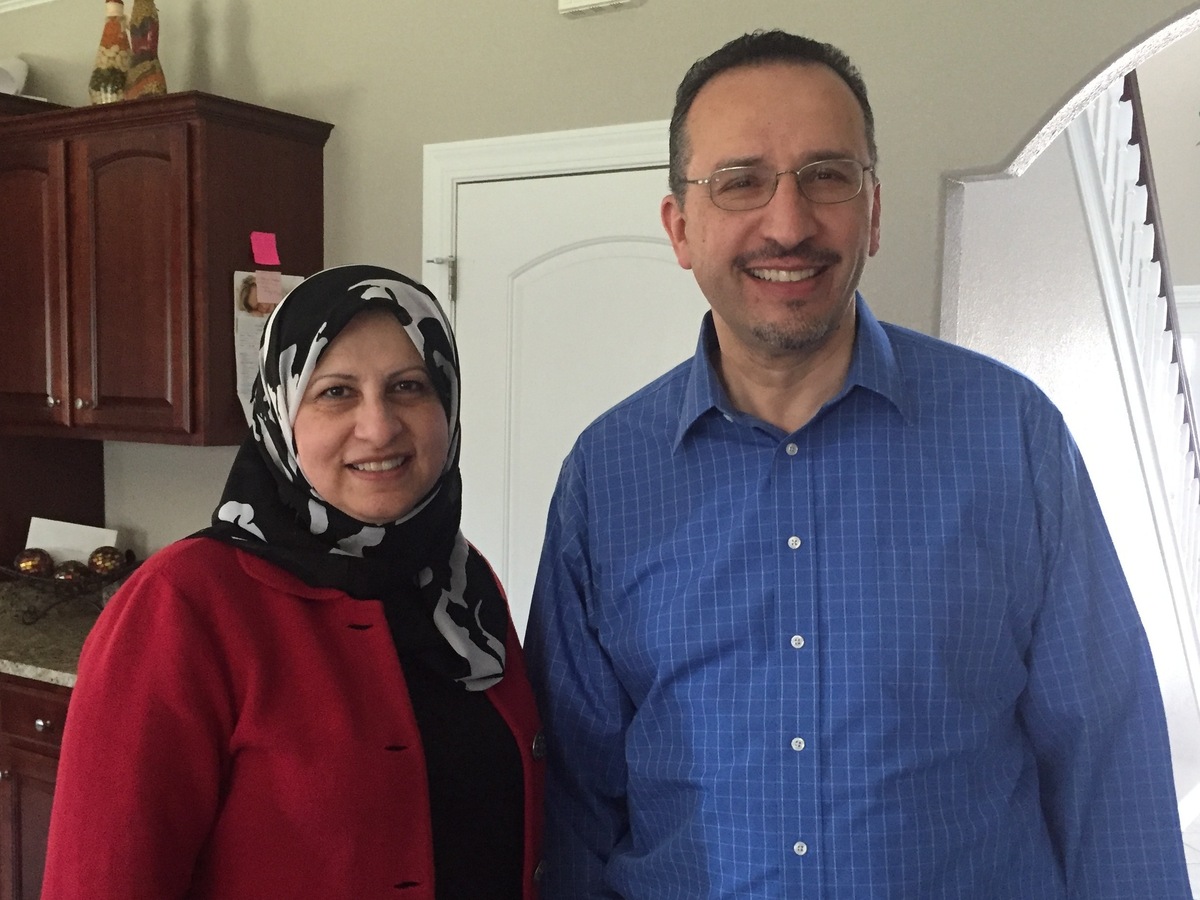 Janan Atta Najeeb and her brother Othman Atta say the negative Muslim rhetoric this campaign season has energized more Muslims to vote and get engaged politically. 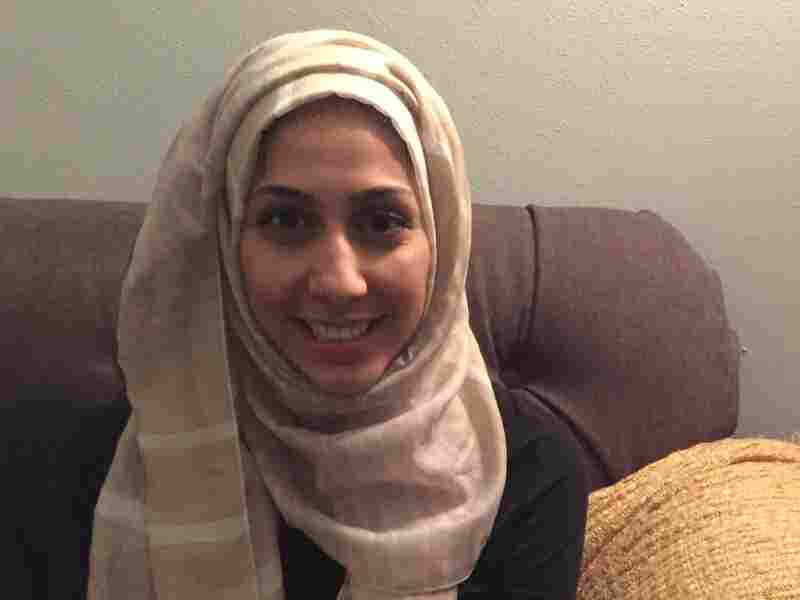 Afnan Musaitif, 27, says she laughed when she heard Ted Cruz's idea of patrolling Muslim neighborhoods because she thought it was so "absurd." Asma Khalid/NPR hide caption 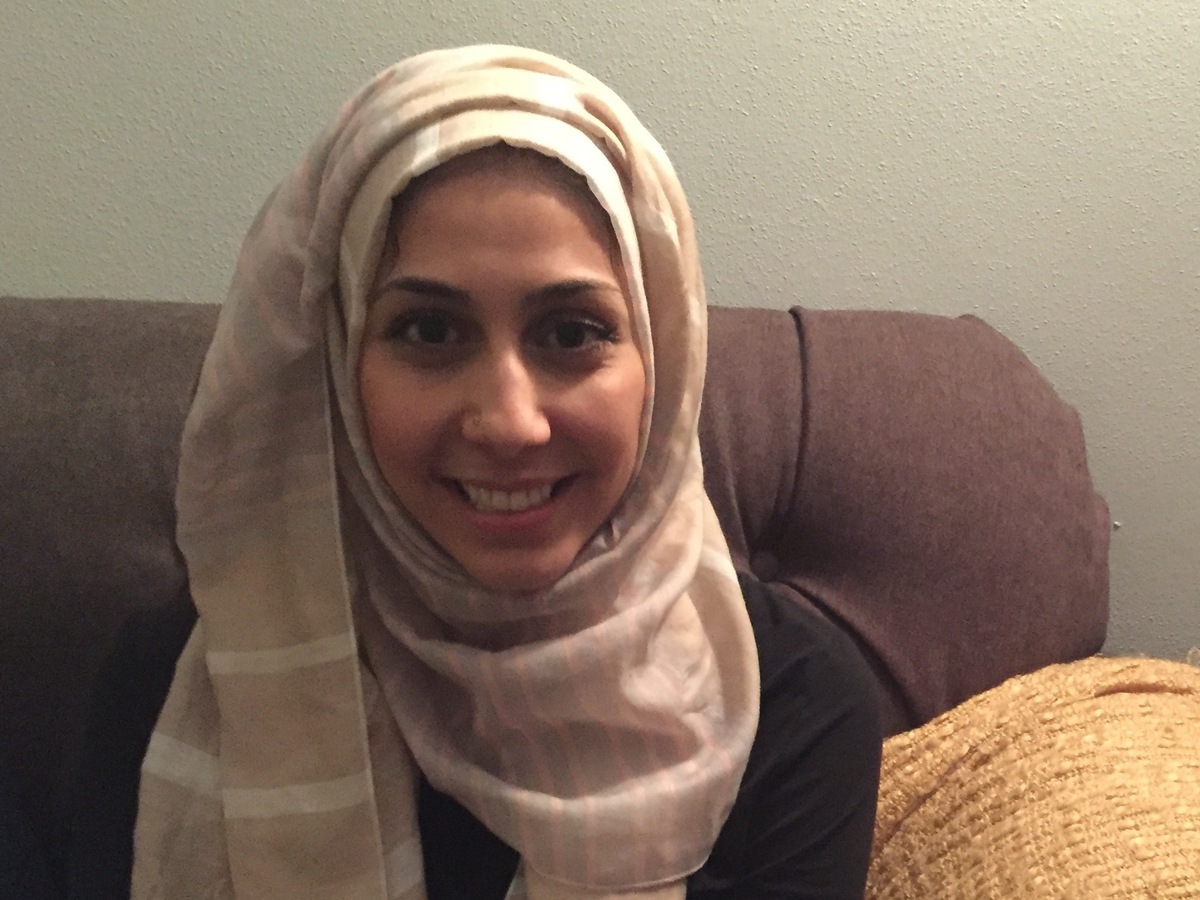 Afnan Musaitif, 27, says she laughed when she heard Ted Cruz's idea of patrolling Muslim neighborhoods because she thought it was so "absurd."

For months, the two leading Republican candidates have tried to prove they're tough on Muslims. Donald Trump famously introduced the idea of a temporary ban on Muslim immigration, and then, last month, the businessman-turned-politician said he believes "Islam hates us." Texas Sen. Ted Cruz has often insisted President Obama should use the words "radical Islamic terrorism" and, last week, Cruz issued a statement that called for patrolling Muslim neighborhoods.

This political rhetoric is horrifying many Muslims, but it's also had unintended side effects — encouraging them to get out to vote and work with other minority communities.

Muslims make up just one percent of the U.S. population, but, in the 1990s into the early 2000s, they were often loyal Republicans. But some Muslims now say they don't see a place for them in the current party.

"This election's coming across as a pick-your-poison election," said Minhaj Husain, who lives in suburban Waukesha County — solidly Republican terrain just outside of Milwaukee. Husain says, in his view, the Republican Party has deteriorated in recent years.

"I used to be a big Ron Paul supporter, big libertarian," said Husain, but then he adds — there's no room for someone like Paul in the current Republican party.

So, this cycle he intends to vote for Bernie Sanders.

His wife Asma Sukhera, 36, said she's appalled, not just by what some GOP candidates are saying, but, by how many fellow Americans seem to agree with them.

"More people are latching on to this ideology of separatism, banning Muslims ... building a wall, these ideas are so anti-American, and so against everything that we grew up believing in," she said.

Sukhera is not alone. That sense of disbelief is common among Muslims in the Milwaukee area. (Voters in Wisconsin head to the polls Tuesday for the state's primary election).

"I think I had a more ideal image of living in America," said Afnan Musaitif, 27. Musaitif was born and raised in Wisconsin. She says Milwaukee is her home, but it feels like some presidential candidates don't consider her an American. She said Cruz's comments about patrolling Muslim neighborhoods was particularly "absurd."

"It pits Muslims as a whole as a problem," she said. "It makes it sound like Muslims live cultish, off to the side, like we have this weird lifestyle and they have to spy on us to make sure we're under control. And, it's like no — we're just like you."

Musaitif says she became desensitized to anti-Muslim rhetoric in the years after the 9/11 attacks, but this campaign season has made her rethink how safe she feels wearing a head scarf in public.

Muslims say they're disappointed, frustrated, and exhausted, but not necessarily scared. They point out that non-Muslim friends and neighbors are at times their fiercest defenders.

Othman Atta, the executive director of the Islamic Society of Milwaukee, says the mosque has received hundreds of letters, and even checks from strangers, who merely want to let their Muslim neighbors know they're welcome in town.

Still, he worries about the psychological effects of this rhetoric.

His sister Janan Atta Najeeb does, too.

"As an adult we know it's a free country, people can be as idiotic as they want really, but it concerns me that maybe our children and the children of other Muslim families will feel marginalized, will feel that somehow they're less American than others, and people view them as less American," she said.

Atta says at home, he can make sure his kids don't feel marginalized, but he worries that Muslim kids are growing up in a hostile world, and that could have consequences.

"We don't want to see our children become sidelined or disenfranchised because that in my view is what will ultimately allow those who recruit for terrorism to kind of find people who are disaffected, who don't feel that they're part of society," Atta said. "And, that's what I think is going on in Europe, more so than you'll find here in the United States 'cause in the United States we tend to be much better at integrating."

In fact, in the Milwuakee area, Atta says the nasty rhetoric is actually having a positive side effect.

Muslim organizations have been holding voter registration drives. And, last weekend, Najeeb held a get out the vote training session at a Muslim conference in Milwaukee. Najeeb herself hopes to be a delegate at the Democratic convention for the first time.

Atta says Muslims are getting engaged and joining forces with other voters who feel similarly attacked and have a common goal this November.

"I think that is a great country, and we want to keep it great," said Atta. "And, that's why those individuals that marginalize others or disenfranchise others - we will stand against them — regardless of whether those people being excluded or marginalized are Muslims, or African-Americans or Hispanics or any other group."

Atta says he intends to vote for Bernie Sanders in the Wisconsin primary Tuesday; but come November he'll vote for any Democrat to keep Cruz or Trump out of the White House.