Accessibility links
FACT CHECK: The White House's Private-Sector Job Streak How much can a president take credit for job growth in the private sector? 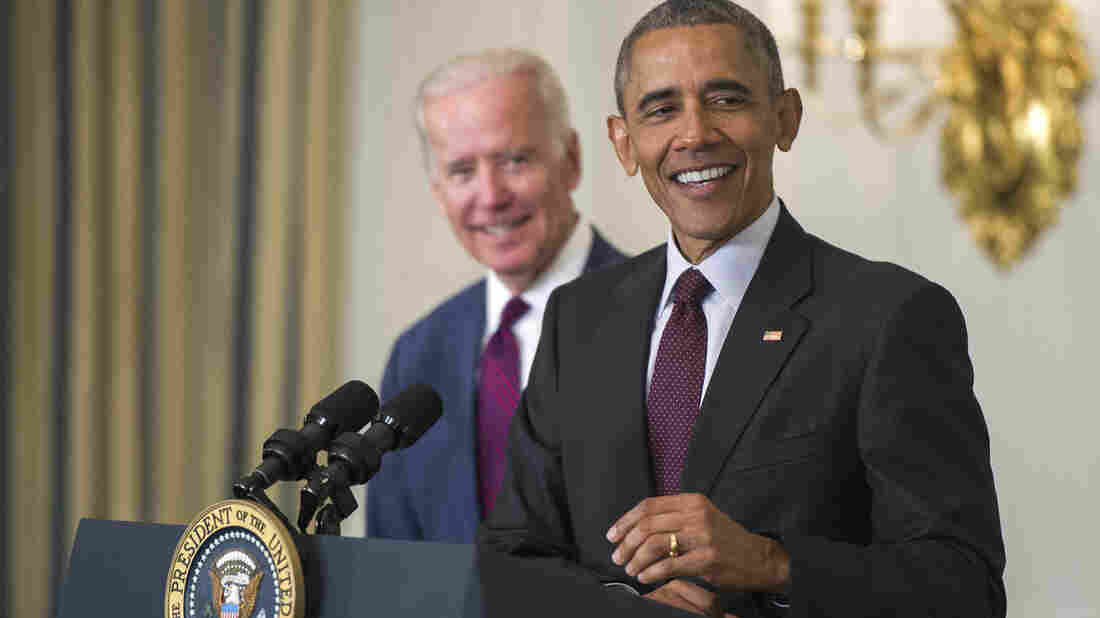 Friday brought a pretty strong March jobs report. Labor force participation (that is, the share of Americans working or looking for work) picked up, and wages were solid — two areas that haven't always been confidence inspiring in past jobs reports.

Jobseekers weren't the only ones celebrating this report; the Obama administration took the opportunity to brag, as well, tweeting about the long, uninterrupted stretch of private-sector job growth.

They've been touting this streak for a long time now. So what's behind the claim? We decided to dig.

Also, here's what the longest streak of private-sector job growth on record looks like → https://t.co/WxXMLYMe8G pic.twitter.com/Yytw80yPfh

The Claim (and Chart):

The Question: Is that true?

The Short Answer: Yes. But Obama can't take credit for a lot of that job growth.

The White House is right about the numbers. The "longest streak" claim was true in 2014, as the Washington Post's Fact Checker found back then, and the streak has only grown. This was the 73rd straight recorded month of private sector job growth (barring revisions).

But hold on. Edelman's chart implies something more: there's that point where Obama took office (that is, where the bars in the chart turn blue) and then job growth flips direction. It looks like Obama is responsible for that long stretch of job growth. Is that true?

Probably not. Yes, the president has some influence (more on that later), but he doesn't sit at the economy's steering wheel. Even a former Obama economic advisor Austan Goolsbee says that a president has little control over much of what happens in the economy.

"I think the world vests too much power — certainly in the president, probably in Washington in general — for its influence on the economy, because most all of the economy has nothing to do with the government," he told Marketplace in 2012.

Likewise, when a Princeton University study found in 2014 that the economy tends to do better under Democratic presidents than Republicans, the authors also added that most of the reasons behind that growth in fact don't seem closely tied to the presidents themselves.

"We find that oil shocks, productivity shocks, international growth shocks, and (perhaps) shocks to consumer expectations about the future jointly explain about half of the partisan gap," they wrote. "The first three of these look a lot more like good luck than good policy."

(However, the authors do note that foreign policy decisions could account for some of the oil shock effects. It's also possible that Democratic presidents somehow affect consumer expectations, though as the Washington Post's Brad Plumer wrote in 2014, "it's surprisingly difficult to tease out why this might be."

OK. So a president can't claim total (or even majority) credit for the economy. Exactly how much can Obama claim in this instance?

That, as so many things in the dismal science, is in the eye of the beholder.

One thing that seems certain: the stimulus package championed by the Obama administration did make the immediate shock of the recession less painful — mainstream economists agree on that — and created millions of jobs, as the CBO found. And as we wrote in a fact check last year, it also diminished the effect on poverty levels.

But he wasn't the only one at work on the economy at the time, as one economist points out.

"There were a few things going on, there was TARP, which actually happened under his predecessor," says Doug Holtz-Eakin, former director of the CBO and president of the American Action Forum, a right-leaning think tank. "There were the extraordinary monetary policies the Fed was taking, and then there was the stimulus."

And in Holtz-Eakin's estimation, the Fed's role was the biggest of those three. (Additionally, at the start of the Obama presidency, the Fed was led by Ben Bernanke — not (at that time) an Obama appointee.)

So the stimulus helped pull the U.S. out of recession, but other factors did, too. What about the rest of Obama's tenure?

Brookings Institution economist Gary Burtless agrees that the stimulus was massively helpful, and he also thinks that Obama's indirect influence boosted the economy.

"Some of the achievement is due to the president though his indirect influence on monetary policy," he said. "And in the first two years of his term, through his direct effect on fiscal policy that the U.S. decided to pursue."

Regarding monetary policy, Burtless is referring to Obama's reappointment of Ben Bernanke and the subsequent appointment of Janet Yellen as Federal Reserve chairs. Under Bernanke and Yellen, the Fed maintained near-zero interest rates for seven years and undertook three rounds of massive asset purchases known as quantitative easing — both of which were policies to stimulate the economy.

So to the extent that the Fed's policies were successful, Obama to some degree had a hand in boosting the economy through Fed policy, by Burtless' logic.

In addition, he points out, labor force participation and the employment-population ratio are still disappointingly low (despite March's gains). Once (slash if) those bounce back, then the recovery will seem more real.

Another point: this is private-sector job creation. The government has had a shakier job creation record during the recovery. At this point, it has created jobs for five consecutive months.

In addition, while most of those economists surveyed thought the stimulus' effects would be good in the long term, early one quarter of economists said they were "uncertain" whether the long-term potential costs of the stimulus would outweigh the benefits.

Whatever potential knock-on effects an economic policy might cause, Holtz-Eakin adds, a president has to claim responsibility for the good and the bad.

"They should get some credit, some blame," said Holtz-Eakin.

An earlier version of this story stated that the Federal Reserve maintained near-zero interest rates for six years. In fact, it was seven.