There's a lot on the line for both parties in Tuesday's Wisconsin contest. For Texas Sen. Ted Cruz, the state is a prime chance to stop Donald Trump and complicate the GOP front-runner's path to the nomination. For Bernie Sanders, a win over Hillary Clinton helps close his delegate deficit and gives the Vermont senator new momentum heading into the next stretch of the primary calendar.

Polls in the state will close at 9 p.m. EDT, and we'll have live coverage at elections.npr.org along with our live elections special. Here's what to watch for in each contest.

Cruz looks to capitalize on conservative opposition to Trump

Coming off a bad week where he dealt with criminal charges against his campaign manager and stumbled over his position on abortion, Trump needs a victory to change the narrative. But most of the final polls have shown Cruz with a steady but tightening lead.

On paper, this should be fertile territory for Trump. Wisconsin's GOP electorate is overwhelmingly white, fewer than half of voters had a college degree in the 2012 primary, and just over a third of voters identify themselves as evangelical.

But Trump has run into resistance from the state's influential conservative radio hosts; many of Wisconsin's top right-wing talkers have dismissed the real estate mogul as a fraud and a disaster. The hostility is something the Trump campaign apparently didn't anticipate. He had a tense interview with WTMJ's Charlie Sykes, who is part of the #NeverTrump movement. And during another talk with WISN's Vicki McKenna, Trump hung up when she challenged him over his controversial tweet of an unflattering photo of Cruz's wife, Heidi.

By congressional district, Donald Trump is expected to be strongest in the western half of the state; Ted Cruz, the eastern half; and John Kasich, around the state capital. 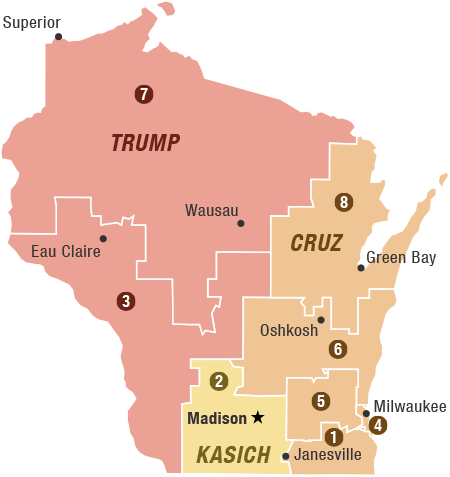 He also has hammered his onetime rival Scott Walker over the Wisconsin governor's performance in the state. But Republican observers there say the attacks against Walker — who has won three elections in a blue state in four years and whose popularity remains about 80 percent among GOP voters — could backfire.

In the final hours of the campaign, Trump has been focused on the state's rural areas, making stops in La Crosse and Superior on Monday. Those areas in the west and north of the state (also where conservative talk radio doesn't penetrate as much), including the 3rd and 7th Congressional Districts, are where he could perform best. And since the Badger State's 42 delegates are awarded in a dual system — 15 to the statewide winner and then 24 split to the winners of each congressional district — he could still gain delegates there even if he loses statewide.

The Green Bay-based 8th District could be tighter between Cruz and Trump, but GOP observers in the state expect the Texas senator to do best in the most populous southeastern areas around Milwaukee.

Even though Wisconsin shares many similarities with the Buckeye State, the best hope for Ohio Gov. John Kasich to pick up any delegates may be in the Madison-based 2nd District. Last week's Marquette Law poll showed Kasich narrowly edging out Trump there. It's one of the most liberal parts of the state, and the district's few GOP voters are more moderate.

Sanders hopes for a progressive boost

Most of the polls out of Wisconsin over the past week have given Bernie Sanders a narrow edge over rival Hillary Clinton.

The Vermont senator has hit the ground hard over the past few days, holding rallies across the state Monday. Meanwhile, Clinton was campaigning in New York, looking ahead to the Empire State primary in two weeks. Her husband, former President Bill Clinton, hit the stump in Wisconsin in her stead; her absence was seen by some as a tacit acknowledgement that a loss Tuesday was likely.

But Sanders needs a big victory in the state to cut into Clinton's 263 pledged-delegate advantage. Of the Democrats' 86 pledged delegates, 57 will be awarded proportionally by congressional district, while 19 will be given to the statewide victor.

Eight years ago, Barack Obama beat Clinton by 18 points in the state. Its Democrats have a strong progressive streak, which should play to Sanders' advantage. It's also an open primary, and Sanders has traditionally done better in those than in closed contests where only registered Democrats can vote.

Sanders should do well in the areas around Madison; it's where the University of Wisconsin is anchored and has traditionally been a progressive hotbed. According to the Marquette Law poll, he is also performing well in the north and western parts of the state.

Clinton needs to get big margins around Milwaukee and Green Bay and their suburbs to topple Sanders. The Marquette Law poll showed a close contest in those regions.