Accessibility links
Meet The 'Rocket Girls,' The Women Who Charted The Course To Space Before there were digital computers, there were "human computers," women who used pencils and paper to do the math that helped carry the U.S. into space. Nathalia Holt tells their story in a new book.

In the 1940s, an elite team of mathematicians and scientists started working on a project that would carry the U.S. into space, then on to the moon and Mars. They would eventually become NASA's Jet Propulsion Laboratory (or JPL), but here's what made them so unusual: Many of the people who charted the course to space exploration were women.

Nathalia Holt tells their story in her new book, Rise of the Rocket Girls: The Women Who Propelled Us, from Missiles to the Moon to Mars. Holt tells NPR's Ari Shapiro that the women worked as "computers."

"In a time before the digital devices that we're used to today, it was humans that were doing the calculations," she says. "And so you needed these teams of people — many of whom were women, especially during World War II — and they were responsible for the math."

Barbara Paulson was one of those women. She tells Shapiro that while her sisters were preparing to be secretaries, she took a different path. She says, "I had had quite a bit of math in high school. ... I know my mother certainly wanted us all to graduate from college, but why I veered off into this ... I can't remember. ... But I did, and it helped me get the job that I did get at JPL." 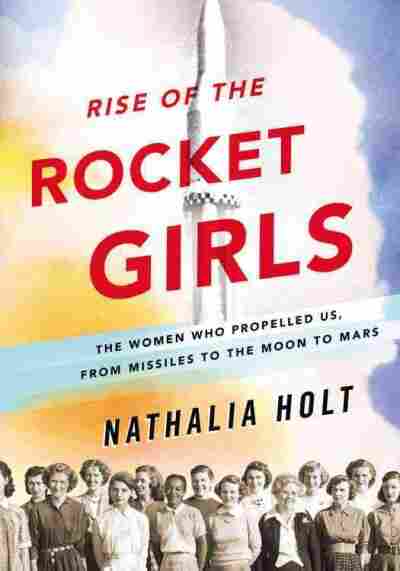 Rise of the Rocket Girls

The Women Who Propelled Us, from Missiles to the Moon to Mars

Title
Rise of the Rocket Girls
Subtitle
The Women Who Propelled Us, from Missiles to the Moon to Mars
Author
Nathalia Holt

Today, Holt says, "There is hardly a mission that you can find in NASA that these women haven't touched."

Holt: In 2010, I was expecting my first child. And my husband and I were just having a terrible time coming up with a name. We finally thought of Eleanor Frances. We googled the name, and the first Eleanor Frances that popped up was a woman named Eleanor Francis Helin. And there was this beautiful picture of her at NASA in the 1960s accepting an award. And I was stunned by this picture because I hadn't realized that women even worked at NASA at this time, much less as scientists. And so what I found is that there was this group of women who, starting in the 1940s, worked at the Jet Propulsion Laboratory in Pasadena, Calif.

On tracking down the Jet Propulsion Lab women

Holt: It was quite difficult to track down this group and find their stories. In fact, I think it was over 40 Barbara Paulsons I talked to before I found the right Barbara Paulson. ... But when I found the real Barbara Paulson, the one I was searching for, it was so wonderful. And right from the beginning, Barbara had these amazing stories and incredible memory.

On one of the first stories Paulson shared

Holt: I think it has to be the Explorer 1 [satellite]. That has to be right at the beginning. ...

Paulson: Well, Explorer 1 was launched Jan. 31, 1958. And that would've been after Sputnik had been launched. ... I was asked to graph the results coming back from the Explorer 1 satellite. And I worked most of the night, through the night, at JPL with my mechanical pencil and graph paper and light table that I was working on. And that was all the equipment that I had. ...

As I look back on so many things, I get more excited now than I did then. But it was exciting. I mean, it was great news that it was ... in orbit around the Earth.

On what Holt hopes her book will accomplish

Holt: My hope is that these women serve as role models, not just for my daughter of course, but for all of the women that are interested in science. It's a difficult time for women in technology right now. In 1984, 37 percent of all bachelor's degrees in computer science were awarded to women, and today that number has dropped to 18 percent. And even for women that are working in science today, it's about half of all women that leave midcareer. So I think these stories are important for inspiring and being role models that are so much needed for women today.