Accessibility links
How Will Trump The Brand Survive Trump The Candidate? There's some evidence Trump is losing favor with the high-end customers his businesses target. 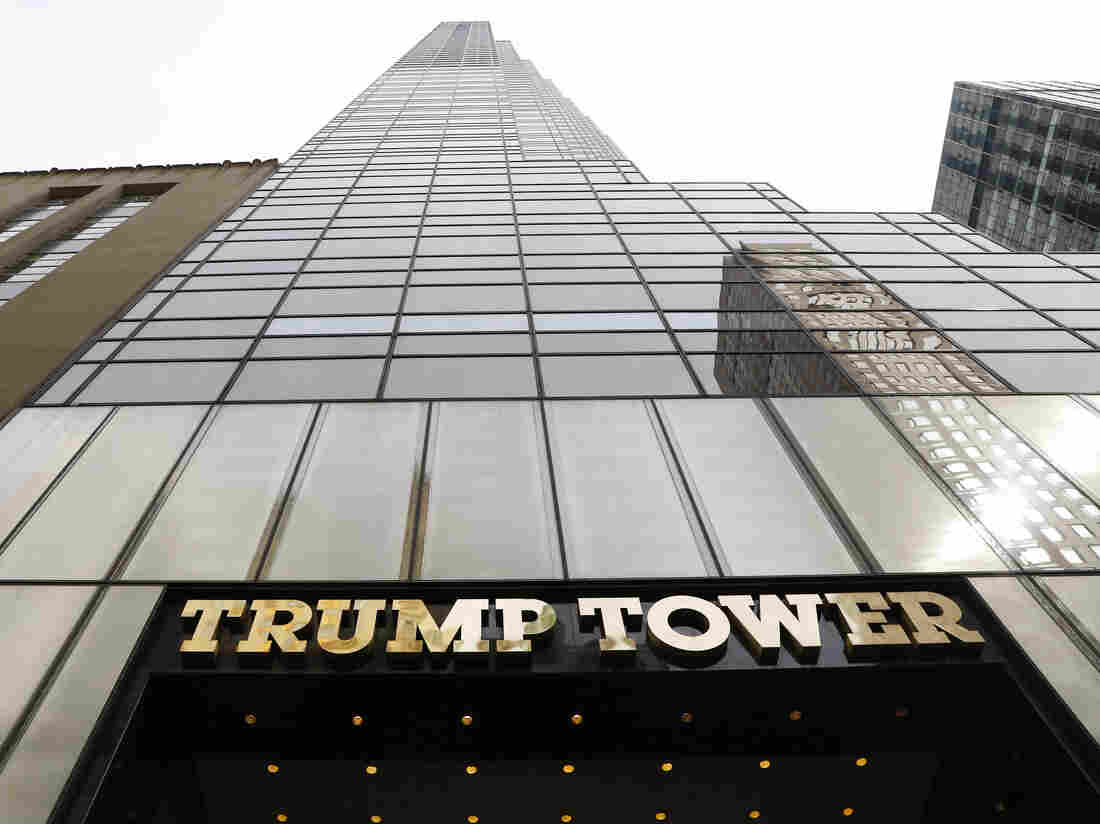 Opened in 1983, Trump Tower on Fifth Avenue in Manhattan has been a big part of the Trump brand, promoting an image for glitz and glamour. Mark Lennihan/AP hide caption 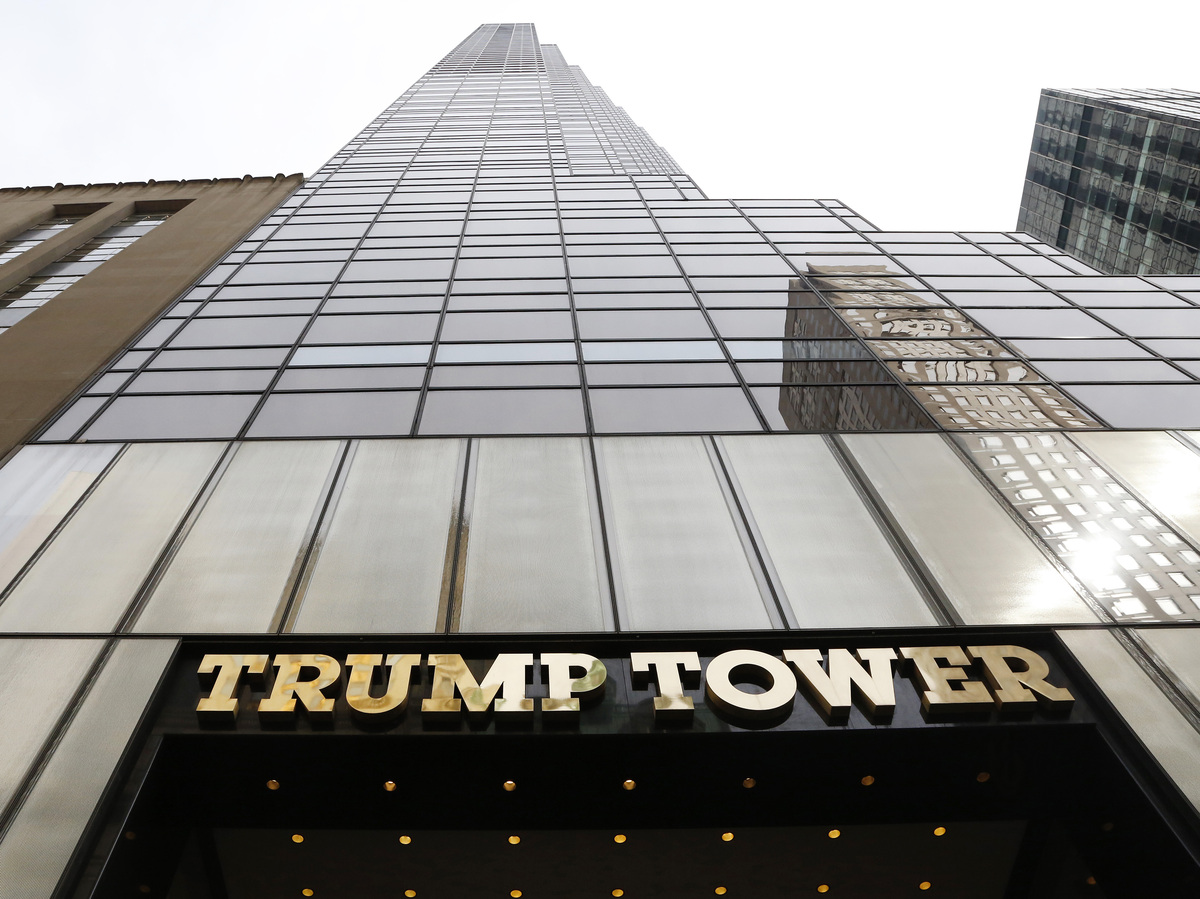 Opened in 1983, Trump Tower on Fifth Avenue in Manhattan has been a big part of the Trump brand, promoting an image for glitz and glamour.

Donald Trump first made his mark in the mid-1970s by purchasing the venerable Commodore Hotel in Midtown Manhattan and covering it with stainless steel and glass.

It was the beginning of a long, carefully planned campaign to create a Trump brand of glitz and glamour — one that he would attach to everything from champagne to neckties.

Now some people think that the mud-slinging presidential campaign may have seriously damaged Trump's brand, especially with the high-income crowd he caters to.

"Among this higher-income group — the group that, at least for his hotels and golf courses and things like that would be the target group — we do think that this data is showing there could be significant problems," said Will Johnson, president of BAV Consulting, a division of the Young & Rubicam Group, which regularly surveys public attitudes about brands.

Among people with household incomes over $150,000 a year, the number who equate Trump with being "upper class" fell by 53 percent in the past two years ending in December.

Similar declines took place in the perception of Trump as "prestigious" (39 percent), "glamorous" (30 percent) and "intelligent" (29 percent). Trump did gain in the percentage of people who saw him as being "traditional," a word often associated with conservative values.

Meanwhile, a survey conducted for Forbes by the polling and consulting firm Penn Schoen Berland found that 45 percent of U.S. residents who earn at least $200,000 annually said they will make a point of not visiting a Trump hotel or golf course over the next four years.

Among them, 77 percent said they would stay away to protest his campaign. As Forbes put it:

"The results indicate that Trump's sweeping popularity among a certain swath of voters does not translate to the affluent Americans whom he seeks to attract to his luxury properties."

The results are potentially worrisome for Trump's vast and expanding business holdings, because he and his brand are essentially inseparable.

Trump may have got his start in real estate, building high-end hotels and casinos, but over the past two decades he has also lent out his name to a wide range of consumer products and services.

"Everything from meat to mortgages to vodka to bottled water. I don't think there's anything that someone might not persuade him to brand," said Michael D'Antonio, author of Never Enough: Donald Trump and The Pursuit of Success.

Because Trump's businesses are privately held, it hasn't always been easy to determine what his role in these ventures was, and how much of his own money — if any — went into them. While Trump eagerly serves as pitchman for the steaks, bottled water and suits that bear his name, he also has courted a certain ambiguity about his involvement.

"It's hard to tell when you're walking by a project, or you're a consumer looking to buy, whether the development is something he has lent or sold or rented his name [to], or whether it's one where he has his own money at risk or has his own development company in charge of doing the work," said Michael Cohen, Tri-State president of Colliers International, who has worked with Trump.

The private nature of Trump's holdings also makes it hard to know what impact the campaign is having on revenue so far.

The Trump Organization, which serves as the holding company for much of the candidate's businesses, says no evidence exists of any fallout so far.

On the contrary, Suzie Mills, general manager of the Trump International Hotel and Tower in New York, says business at her hotel has never been better.

"We've been very fortunate that business hasn't changed for us and we haven't seen any changes down the line for future reservations either," she said.

Customers are well aware of the campaign and frequently ask questions about Trump, she says.

"A lot of them sometimes think Mr. Trump's office is based here, and they ask, 'Are we going to see Mr. Trump?' But obviously we don't get into the politics of it. From a hotel standpoint, we do try to keep them separate," Mills says.

"My view of history is that people have very short memories and one has to really go out of their way to have a lasting impact, to degrade a well-managed and well-established brand."

But he says a lot of the entrepreneurs and developers who have rushed to leverage Trump's name may be more cautious about doing so in the future.

"Perhaps the question we should be discussing is whether the folks who develop the buildings, as opposed to the people who are going to be buying the condos ... will continue to want to put the Trump brand on their real estate," Cohen said.