Accessibility links
Book Review: 'The Red Parts' By Maggie Nelson Author Maggie Nelson's aunt was murdered decades ago. Her new book chronicles the trial that ensues when the old, cold case is reopened. It's an uneasy masterpiece that avoids quick catharsis. 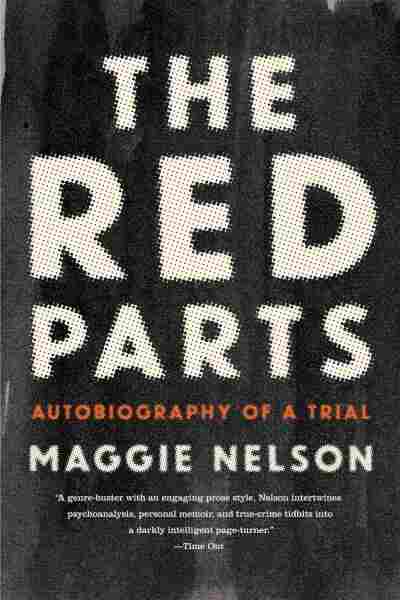 Autobiography of a Trial

At the point in my life when I felt least safe, I watched endless episodes of Law & Order SVU: rape and murder, murder and rape arriving hourly with the familiar chung-chung of the opening credits. In retrospect, I think it was an attempt at vaccination. To preview the worst outcome in a prepackaged, inert capsule of danger, to greet the danger, to exorcise it, and go out into the streets with a degree of immunity. Of course, that is not how safety works: Despite my mental rituals, the stranger who followed me after work was no less real, no less smiling.

In 2004, Maggie Nelson is preparing to publish Jane: A Murder, a collection of poetry, prose, newspaper clippings and other fragments about the 1969 murder of her aunt Jane Mixer. Then, Nelson's mother gets a call: Her sister's murder, unsolved for 35 years, has been reopened. A retired nurse will be charged. What follows is Nelson's account of the trial, her own fascination with the murder, and the larger cultural fascination with the death of pretty, young, rich, white girls.

Blood, genitals, entrails, and mouths are our red parts, and it's this intersection of sex, violence, and glamour that The Red Parts: Autobiography of A Trial probes. Why is something so gruesome also fascinating? Edgar Allen Poe calls the death of a beautiful woman the most poetic subject in the world, but a true crime TV producer making an episode about Jane puts it to Nelson differently: "This is prime time. No black people, no bad teeth."

Media saturates the trial: Media provides the story's archetype in a thousand movies and novels about the sexualized deaths of pretty young girls, and media mediates the grief afterward by making private mourning public. The TV cameras swing to Nelson's family in court whenever gruesome images — a garroted neck, blood-laced hair — are shown as evidence, making their devastation public, self-conscious, performed.

But this book is not a loose condemnation of other people, or of culture and media broadly. Nelson is, after all, writing a book about it, too. Her quivering, precise ethical sensitivity is everywhere at work, worrying, probing, discerning. "In all desire to know there is already a drop of cruelty," reads the book's Nietzschean epigraph. Nelson wonders if there's something grotesque in wanting to look closer, in "jotting down all the gory details, no different or better than anyone else."

Why does she want to know? "Conventional wisdom has it that we dredge up family stories to find out more about ourselves, to pursue that all-important goal of 'self-knowledge,' to catapult ourselves, like Oedipus, down the track that leads to the revelation of some original crime," some catharsis. But that is too easy. She abandons the idea of catharsis early on: It's too neat, too useful.

But then what is The Red Parts? Is it an exorcism, an autobiography, Nelson's attempt to take herself out of the story, make herself safe? She quotes Virginia Woolf, who says that putting something into words takes away its power to wound her. She longs for this cleansing through writing: "If I can make my language flat enough, exact enough, if I can rinse each sentence clean enough, like washing a stone over and over again in river water ... maybe I could do it." But she knows this is fantasy. There is no exorcism, no final answer, no saving revelation. Even the idea of justice is incoherent to her: "For millennia 'justice' has meant both 'retribution' and 'equality,' as if a gaping chasm did not separate the two."

Nelson's resistance to the easy answer, her willingness to reach a kind of conclusion and then to break it ... make 'The Red Parts' an uneasy masterpiece.

You hope that talking about the fear cleanses you, but what if it just summons more demons, both imaginary and real? The Red Parts was originally published in a small run in 2007. In Nelson's more recent book, The Argonauts, she describes how a "stalker of sorts" shows up at her work after The Red Parts was first published, talking about how her aunt was a "stupidhead" who deserved what she got. The police don't find him. She hires a guard until the money runs out, and then he kind of melts away. No resolution, no Law & Order justice.

I quit my job eventually, and, a year or two later, the same thing happened to me on campus with a different stranger, a university maintenance man. The inadequacy of the official response was the final confirmation of my powerlessness: Don't worry, they said, we'll send out an email about appropriate boundaries.

Nelson's resistance to the easy answer, her willingness to reach a kind of conclusion and then to break it, to probe further and further, to ask about her own complex and not entirely noble intentions instead of facilely condemning others, make The Red Parts an uneasy masterpiece. It is a sounding, a wondering, not an autopsy (It was murder, I say!) or a condemnation. Nelson allows space for the truth: Maybe grief is a repeating cycle, not a hurdle to be passed, maybe there is no immunization, maybe we'll never feel entirely safe. Maybe women will always have to negotiate between freedom and safety, on and on in endless compromise.