Accessibility links
Remains Of Korean War Soldier Reunite A Family Sixty-five years of not knowing what happened to Sgt. Robert Dakin — who was declared missing in action in 1950 — took a toll on generations of his family. 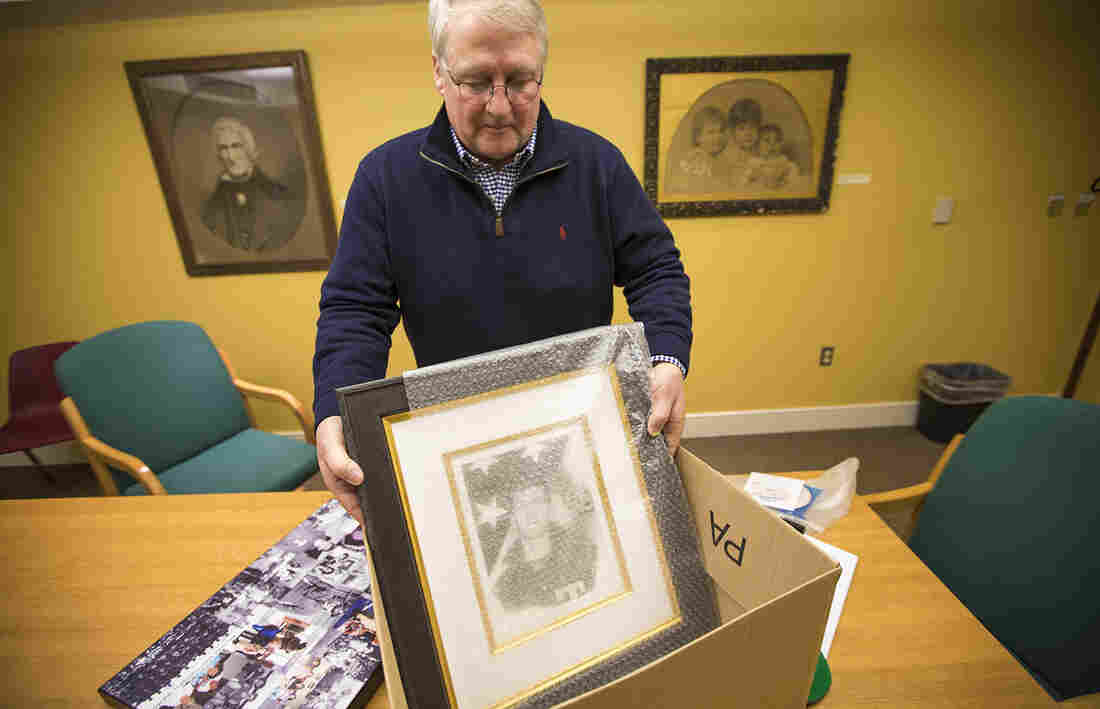 David Cline places the portrait of his uncle Sgt. Robert Dakin into a box with other memorabilia. Dakin was declared missing 65 years ago in Korea. It wasn't until recently that his remains were identified, and this past December, they were returned to his family. Jesse Costa/WBUR hide caption 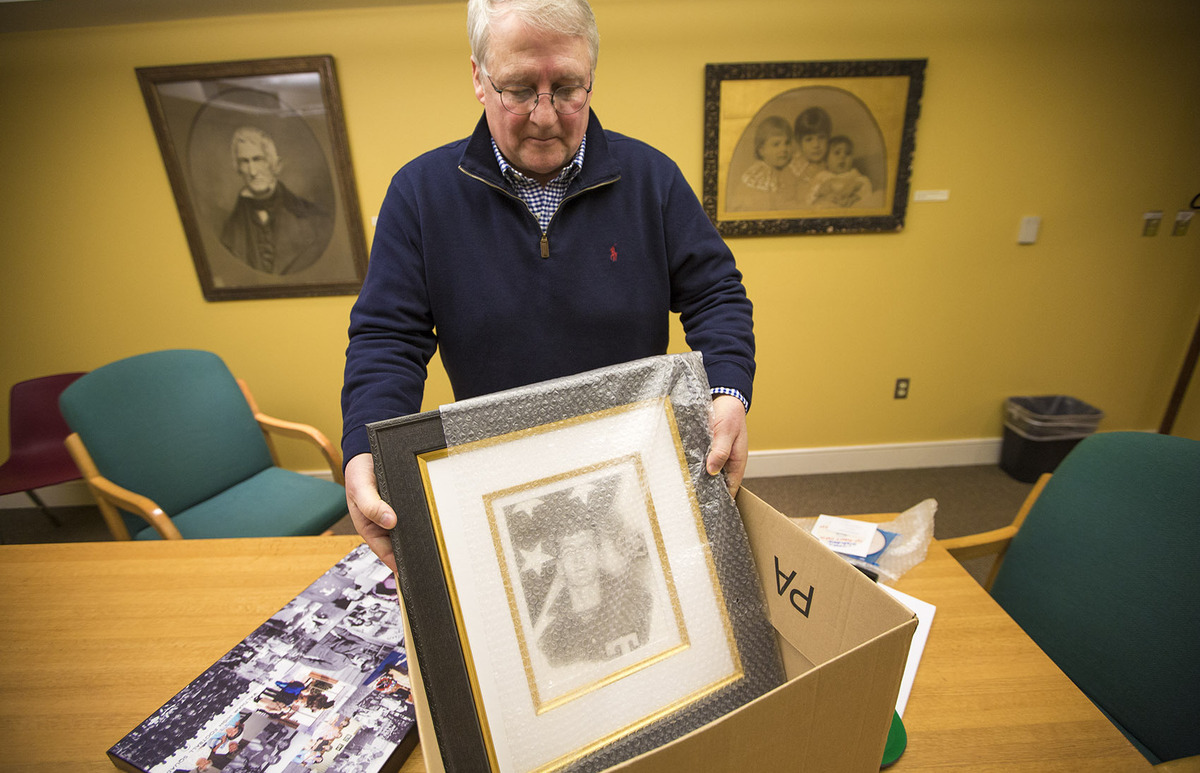 David Cline places the portrait of his uncle Sgt. Robert Dakin into a box with other memorabilia. Dakin was declared missing 65 years ago in Korea. It wasn't until recently that his remains were identified, and this past December, they were returned to his family.

In the winter of 1950, Chinese communist forces stampeded across the frozen border with North Korea. American troops were among those on the other side. They were surrounded and outnumbered.

It became known as "The Battle of Chosin Reservoir," and it left thousands of American service members dead or wounded.

Many Americans just went missing — for decades. Among them was 22-year-old Sgt. Robert Dakin, of Waltham, Mass.

"Bob was the apple of my grandmother's eye. She was just so proud of what he could do, " says David Cline, who never met his uncle. He was born two years after Dakin disappeared. But the man is a legend to him, his siblings and their children.

They all know the lore of Uncle Bob:

Dakin was born in 1928 in working-class Waltham, not far from Boston. He was the only boy with four sisters. When Dakin was a teenager, he helped his father deliver huge blocks of ice off their truck. He had the muscle for it: He was a star athlete — in football, basketball, and track. His mother, Louise, was always in the stands to watch him. And at home, he watched over her, when his father became abusive.

David Cline is proud to show off what snapshots he has of his uncle, such as a photo of Dakin in his Army uniform in front of his barracks.

"My grandmother always held out hope that he was a prisoner of war, but we kind of knew differently ... that ... he was probably had passed," Cline says.

Dakin's mother kept a sketch of him hanging over her bed.

She wrote letters to the Army and implored officials to find her son. All she heard back was that they would tell her if they found anything.

The family felt the void year after year. Thanksgivings were especially hard.

Cline says there were other problems. Dakin's father was abusive at home. Family members moved away — lives came apart — relatives lost touch. The fact that Dakin was missing somewhere in Korea, made things harder. 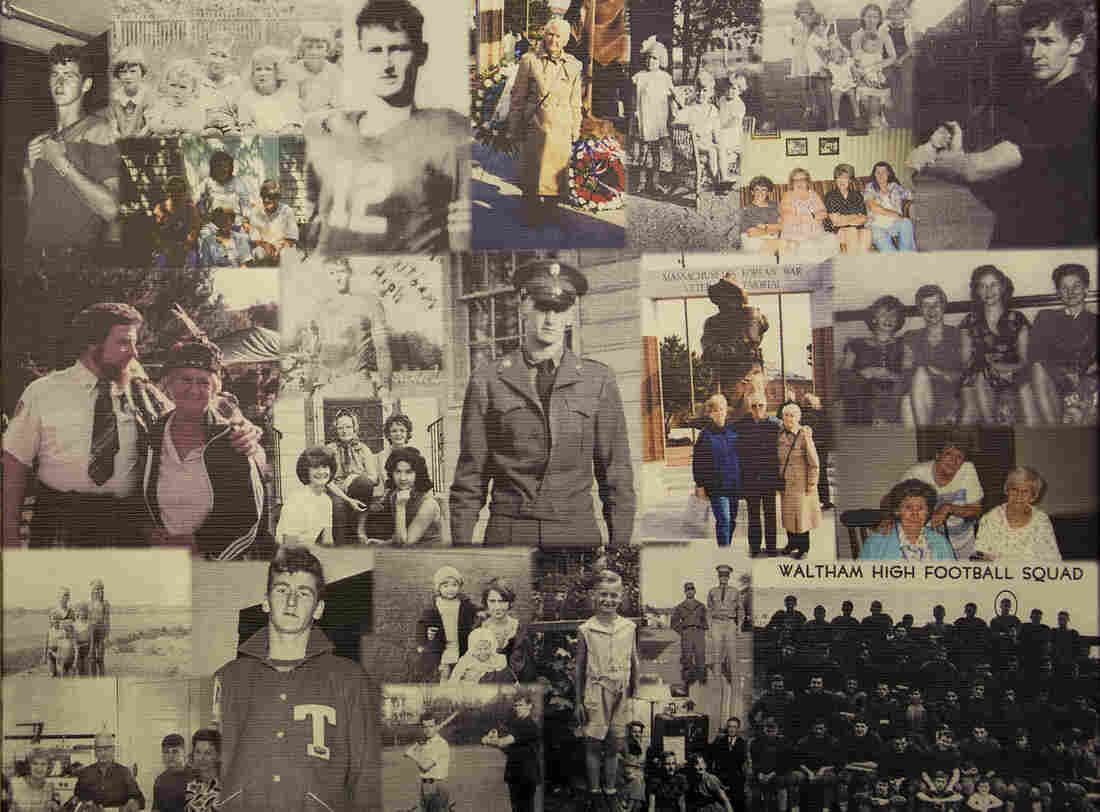 And it wasn't only Dakin's family who felt the loss.

"I met Bob Dakin when we were in the ninth grade together at the North Junior High School here in Waltham," says Lorne MacArthur, who's now 87 years old.

"Bob missing in action really, really affected me greatly. I don't think a day ever went by that I didn't think of him — ever," MacArthur says. "Missing in action, no body, a war so far away. The forgotten war they called it."

MacArthur became superintendent in the Waltham public schools. Twenty-five years after his friend went missing, MacArthur created an award to be presented each year to an outstanding athlete who ran cross-country. He called it the Bob Dakin Award.

"Bob's mother called me and she said, 'Lorne, after 25 years I thought everyone had forgotten, except for me. My heart's been broken over all these years.' And she was crying," MacArthur says.

It wasn't until nearly 20 years after that, in the early 1990s, that North Korea turned over the remains of hundreds of American troops in 208 boxes. Each box contained the bones of several men.

A military laboratory at Joint Base Pearl Harbor-Hickam in Hawaii had the tough job of identifying the remains. It was a painfully slow process. The lab first received some of Dakin's bones in 1993, and then some more in 1999, and more during the next two years.

Jay Price, of member station WUNC, reports on the K208 laboratory at Joint Base Pearl Harbor-Hickam, which is using DNA technology to identify boxes of remains of U.S. service members who died in Korea. 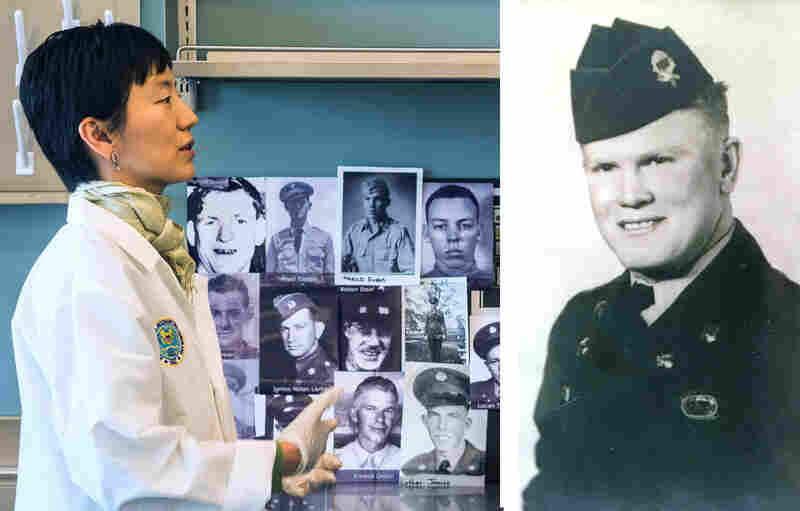 The remains of Charles Ivey (right), who died during the Korean War, were recently returned to his family in North Carolina after his remains were identified by the work of the K208 project, run by Jennie Jin (left). DoD Photo by Bill Dasher / Courtesy of the Ivey family hide caption

But it was only last November when Cline and his family got news that his uncle's remains had been positively identified.

"I just wish the government had worked a little quicker," Cline says.

It was too late for Dakin's mother. She died 14 years ago.

"I realize there was a daunting task for them to take all these GIs' remains and sort it out and do the DNA. But to give her hope, even to go to her and ask her for her DNA would have been just so much, because I know in her dying breath, she waited for Bob and wanted to know something, that he wasn't laying in a foreign soil, forgotten about," Cline says.

Last December, 65 years to the day after Dakin went missing in Korea, his hometown celebrated his return.

Hundreds of people lined the sidewalks and waved American flags. Uniformed soldiers and veterans on Harleys formed a procession. Pallbearers lifted Dakin's casket into a horse-drawn carriage that made its way to the church for a funeral mass, and finally to the cemetery.

Dakin's nieces, nephews, and their children came in from across the country to honor him, too. Cline says it was the first time they had seen each other in years.

"We only had Bob's remains that really kind of brought the family back together. It was the missing link," Cline says. "I think my grandmother would be so proud of her family knowing that we stepped up and we did what was right for Bob and the family. We gave Bob closure."

In a final gesture, the family buried the ashes of Bob's mother, Louise Dakin, with her son, who's finally home.