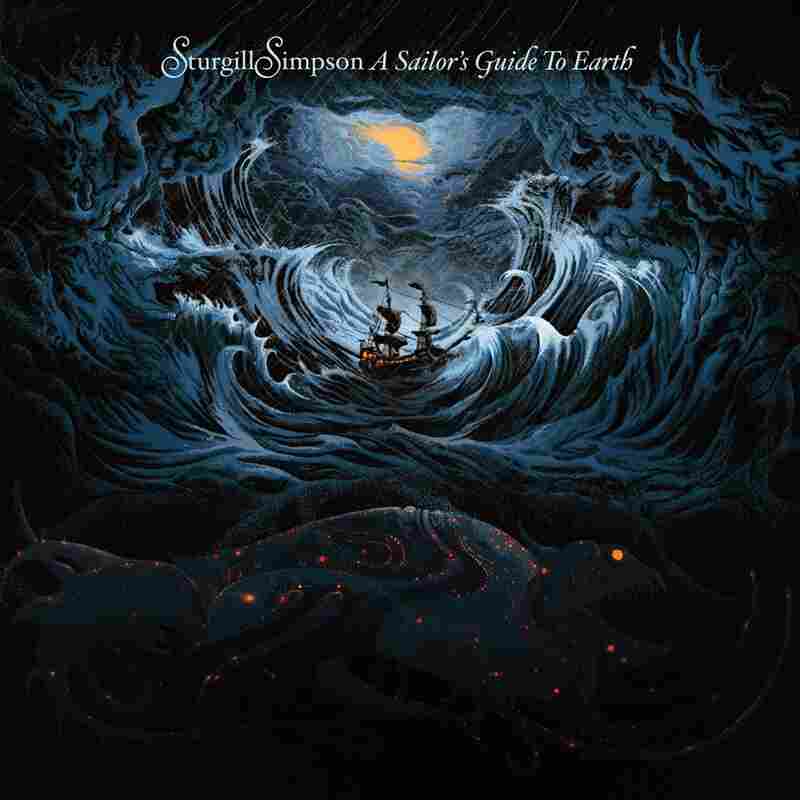 What does the man who said "no" do when everyone around him responds with a "yes"? That's a question Sturgill Simpson had to ask himself upon embarking on his first recordings after his 2014 breakthrough, Metamodern Sounds In Country Music. That album, which showed a deep understanding of country's formalities while playing on the individualistic rebelliousness of rock and enlisting the emotional power of soul, pushed the 37-year-old Kentuckian from a respectable spot in Nashville's crowded talent pool right to its center. Supporting the album on the road with his dazzling band, Simpson became some folks' rebel savior, furthering the never-ending quest for an authentic American sound. The more people heard him, the more he came to be viewed as a way out: of mainstream country formulas, of Americana's staid streak, of indie rock's occasional preciousness. Simpson became the answer to the answers that weren't adequate anymore: "A Genuine Alternative To Alt Country," as The New York Times put it just two weeks ago.

Simpson, however, is not an insurrectionist, a nihilist or a punk. He's a thinker who likes to challenge himself, and is as interested in how the quest for order impacts life and art as he is in the moments that spin that order into pieces. On A Sailor's Guide To Earth, he uses a highly disruptive yet also utterly conventional life event — the birth of his first son — to frame a song cycle about order and insubordination, the longing to fit in and the persistent urge to break away. "Keep it between the lines," he advises his boy in the song of that title, a soul breakdown that starts with a military work song. But for Simpson, life's lines are forever permeable. Just a few tracks later, he's comforting the kid with a mystic's vision of diffuse grace: "a universal heart, glowing, flowing, all around you."

In both "Keep It Between The Lines" and "All Around You," and throughout the album, Simpson takes as his cue the sounds of the late 1960s, when white and African-American musicians interwove rhythms in classic tracks that reflected the promise of the Civil Rights Movement. Simpson partnered with the historically minded horn section The Dap-Kings for five of the album's nine tracks, and his own band, especially the organ player Bobby Emmett and the stellar guitarist Laur Joamets, fully embrace the funky mood. "Brace For Impact (Live A Little)" goes for the greasy country blues of Tony Joe White; "Welcome To Earth (Pollywog)" begins as a tender ballad only to jump into a serious Memphis groove halfway through. This is one way Simpson challenges those listeners who liked what he did last time; his country inflections remain strong, but without becoming a full-fledged blue-eyed soul singer, he's insisting that his roots grow in the same ground where Wilson Pickett and Otis Redding once stood.

The album's other major challenge surfaces within its storylines. Making his life an object lesson, Simpson reflects upon the ordering forces he sought as a source of aid, notably the Navy, where he spent three years rising from pollywog — a newbie — to shellback, a sailor who has crossed the Equator. His view of the military, like that of other post-Iraq troubadours like Hayes Carll and Corb Lund, is pro-troops but critical of policy, and A Sailor's Guide ends with "Call To Arms," a blistering protest song that has Simpson yowling, "This bull****'s got to go!" Other songs confront how soldiers get sucked into drug addiction (a subject his friend John Prine made essential to Americana music with 1971's "Sam Stone") and, in an empathetic reworking of Nirvana's "In Bloom," how ubiquitous "pretty guns" help shape the kinds of boys to grow up to enter to the military. Interspersed with Simpson's spiritual musings about interconnectedness, his sailors' stories are relentlessly honest and sometimes brutal.

Yet Simpson always keeps his biggest challenges for himself, and throughout this openly personal work (which he self-produced instead of turning to his friend and usual partner, Dave Cobb), he recognizes fatherhood as a different kind of call to arms — or perhaps, a call to become disarmed. The string-kissed "Oh Sarah" communicates serious pathos about his marital inadequacies; in "Breakers Roar," another introspective ballad and the closest thing on this seafarer's diary to a lullaby, Dan Dugmore's steel guitar forms iridescent pools around Simpson's solitude. The song, so pretty, is about depression. But tenderness — for his son, for his wife, and maybe even for those many strangers who have come to love what he does — brings Simpson back. "Open up your heart and you'll find love all around," he sings. Doing that, he finds a new way into "yes."