Accessibility links
Review: Graham Nash, 'This Path Tonight' This record is the sound of a rock 'n' roll legend facing his place on the planet head-on, and doing his best to figure it all out as he goes along. 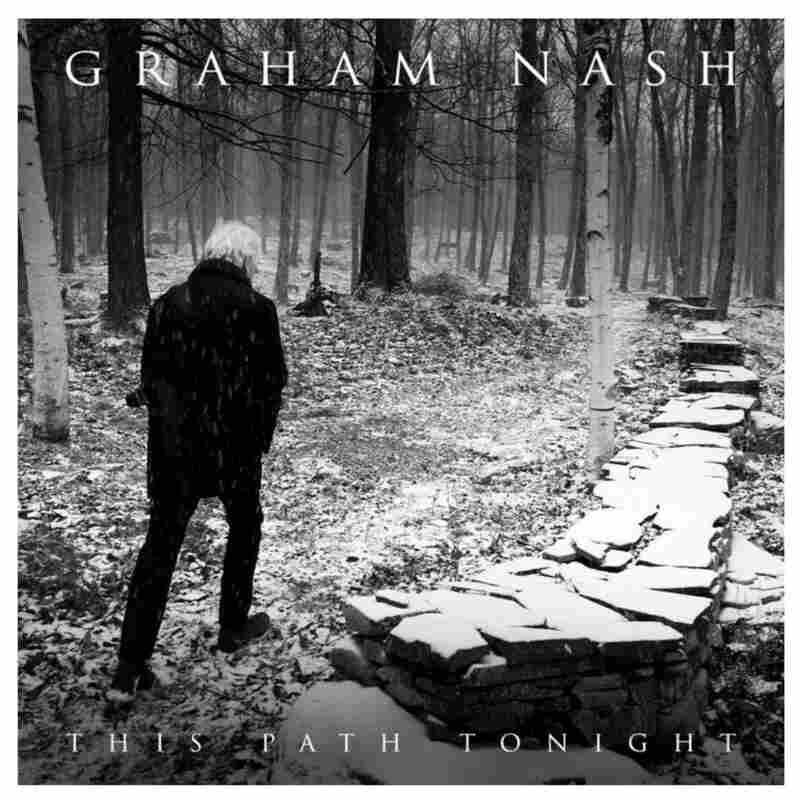 The man who long ago invited the world along for a carefree ride on the "Marrakesh Express" is now taking a markedly more intense type of trip. Graham Nash's new solo album, This Path Tonight, is his first in 14 years, but the 74-year-old singer-songwriter has spent his entire adult life trying to translate experiences from his personal path into something the wider world can take to heart. Trace elements of the same passion that drove him through his work with The Hollies and then Crosby, Stills & Nash (and sometimes Young) are clearly audible on This Path Tonight, though the Blackpool-born singer is obviously in a very different place now.

In the months leading up to the new album's release, Nash has dealt with the severing of two of the longest, deepest relationships in his life. He's gone public with his split from Susan Sennett, his wife of 38 years, and just recently he announced that he'll never work with David Crosby again, effectively ending CSN's 47-year career. For the first time since he was in his 20s, Nash is living entirely on his own terms, for better or worse. The combination of exultation and terror that comes along with that provided the springboard for his new album.

Nash had not yet split from CSN when he crafted his latest batch of songs, but he was clearly feeling the first whiffs of something like freedom. The title track, which opens This Path Tonight, was one of the first tunes Nash and guitarist Shane Fontayne wrote for the album, and it's sung from the perspective of a man at the precipice of major life changes, wondering where they'll lead him. Over an almost martial drumbeat, Nash revels in the emotional uncertainty, singing, "All these dangers of destruction fill my breath with life and light."

That leap from the cliff leads directly into the self-revelation of the gentle, folky "Myself At Last," in which Nash starts off worrying, "Is my future just my past?" but finds a new path by the song's end. Still, This Path Tonight isn't all redefinition and renewal. Nash looks back bittersweetly on either The Hollies or CSN's heyday in the spare, sun-dappled ballad "Golden Days," in which he sings, "I used to be in a band, made up of my friends ... when music had no end." The album's final track, the elegiac "Encore," finds him wondering, "How're you gonna feel if the music dies?" It's probably not just the music that he's concerned about, either: This Path Tonight is occupied with mortality, as a man in his mid-70s looks around and starts asking himself hard questions. In "Back Home," over mournful slide-guitar moans and atmospheric backing vocals that recall his former singing partners, Nash advises, "Take your time, 'cause time will take you ... Mother Earth will soon be calling you back home."

From the fear of finding and losing another love in "Another Broken Heart" to the arrow-in-the-air feeling of daring to take that step in "Target," This Path Tonight weaves a thread through the tumult that has defined Nash's life lately. But Nash isn't just chronicling his own journey; it's everyone's. At some point, most of us ask the same kind of questions these songs pose. This record is the sound of someone facing his place on the planet head-on, doing his best to figure it all out as he goes along.

In "Myself At Last," in the midst of his struggle for self-definition, Nash sings, "I'm screaming at the universe just enough to make her laugh." It's a perfect encapsulation of the importance and futility, the hubris and humility, the drama and the comedy inherent in seeking answers to life's big questions.

Remember, this is the guy who wrote one of the Woodstock Nation's first unabashed odes to domesticity ("Our House") and one of its most unvarnished expressions of political outrage ("Chicago"). This Path Tonight is simply Nash continuing to be as present as possible for everything he experiences and recording the results. It's what he does.