Accessibility links
Book Review: 'Every Heart a Doorway' By Seanan McGuire Seanan McGuire's new novella takes the classic portal fantasy — a group of kids who stumble into magical worlds and are forever changed — and gives it poignant new life.

'Every Heart' Is A Doorway To Winning Fantasy

'Every Heart' Is A Doorway To Winning Fantasy 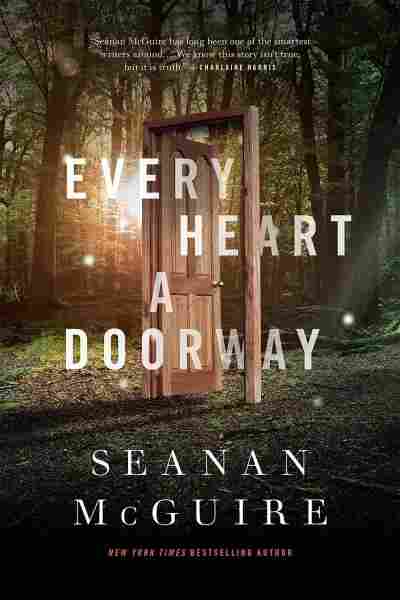 Every Heart a Doorway

Seanan McGuire's award-winning novels and short stories have been testing the parameters of genre fiction for years now, but always with a deep love of horror and fantasy. That hasn't changed in her new novella, Every Heart a Doorway. Rather, she's doubled down — and in half the number of pages. Tight and tautly told, Every Heart grabs one of speculative fiction's most enduring tropes — the portal fantasy, where a person slips from the real world into a magical realm somewhere beyond — and wrings it for all the poignancy, dark humor, and head-spinning twists it can get.

Nancy Whitman, a willowy teen with black-and-white-streaked hair and an eerie air about her, is the latest admission to Eleanor West's Home for Wayward Children, a boarding school run by the enigmatic Ms. West. Nancy quickly finds out why her parents sent her there: Although they think she's overcoming the trauma of a recent kidnapping, she's in fact just returned from a trip through a magic portal. Her Alice in Wonderland-like visit to the Underworld left her permanently changed and wishing she were back with her beloved liege, the Lord of the Dead. As it turns out, the rest of the Home's students have also survived trips through portals to various mystical domains — as did Eleanor herself when she was a girl. Their experiences vary greatly, but one thing unites almost all of them: They desperately wish they could shuffle off this mundane existence and return to the weird, wondrous worlds that forever altered them — and then cast them out. At the home, Eleanor warns Nancy, "'Real' is a four-letter word."

'Every Heart' is a quick read, but there's a lot to sink your teeth into.

McGuire isn't the only author to toy with the notion of the portal fantasy in recent years. Lev Grossman's The Magicians and Some Kind of Fairytale by the late Graham Joyce have also mined this vein, with winning results. But Every Heart takes its own approach. Nancy is paired with a roommate named Sumi, who's every inch as erratic and colorful as Nancy is restrained and monochromatic. As more students are introduced, their backstories surface — including Nancy's, and her reason for being such a still, taciturn person wind up being romantically poetic instead of tragic. It also ties into her desire to return to the Underworld, a sumptuously morbid place that calls to her soul. When the gruesome murder of a fellow student sends Nancy, Sumi, and their friends into a frenzy of fear and suspicion, the ensuing mystery pulls out the best, worst, and most aching truths from them all.

Every Heart is a quick read, but there's a lot to sink your teeth into. Heartbreakingly, Eleanor hopes senility will bring her closer to the land of Nonsense she fell into as a girl. Sumi, who seems to be around Nancy's age, admits only to being "older than I look, younger than I ought to be." Lundy, the school's therapist, is aging backward as a result of her stay on the other side of reality. Growing up isn't a linear process, McGuire puts forth, but a jumpy, chaotic one full of retrograde steps and conflicting rhythms. And innocence is double-edged sword — something to be yearned for as well as distrusted.

The whodunit plot of Every Heart isn't complex or particularly suspenseful, but it doesn't need to be. The characters carry the story. Sumi's scattershot wisdom is both funny and profound; Nancy's asexual crush on Kade, a trans classmate, is rendered in bold, sensitive strokes. McGuire's dialogue is witty yet organic, and she lingers luxuriantly on tiny, telling details — the fluttering of a curtain, the scent of chalk dust — that bring the Home to teeming life. At points, Nancy and the others compare their own strange trips to magical worlds to Alice in Wonderland and The Chronicles of Narnia, books they've read — and have issues with, as angst-ridden teens are apt to do, paranormal or not. And with Every Heart a Doorway, McGuire has created her own mini-masterpiece of portal fantasy — a jewel of a book that deserves to be shelved with Lewis Carroll's and C. S. Lewis' classics, even as it carves its own precocious space between them.