Accessibility links
#MemeOfTheWeek: Hillary Clinton, The New York Subway And Authenticity The presidential candidate took a two-stop ride on the New York City subway this week. It seemed to be a play at the authentic, but it may have turned out to be anything but. 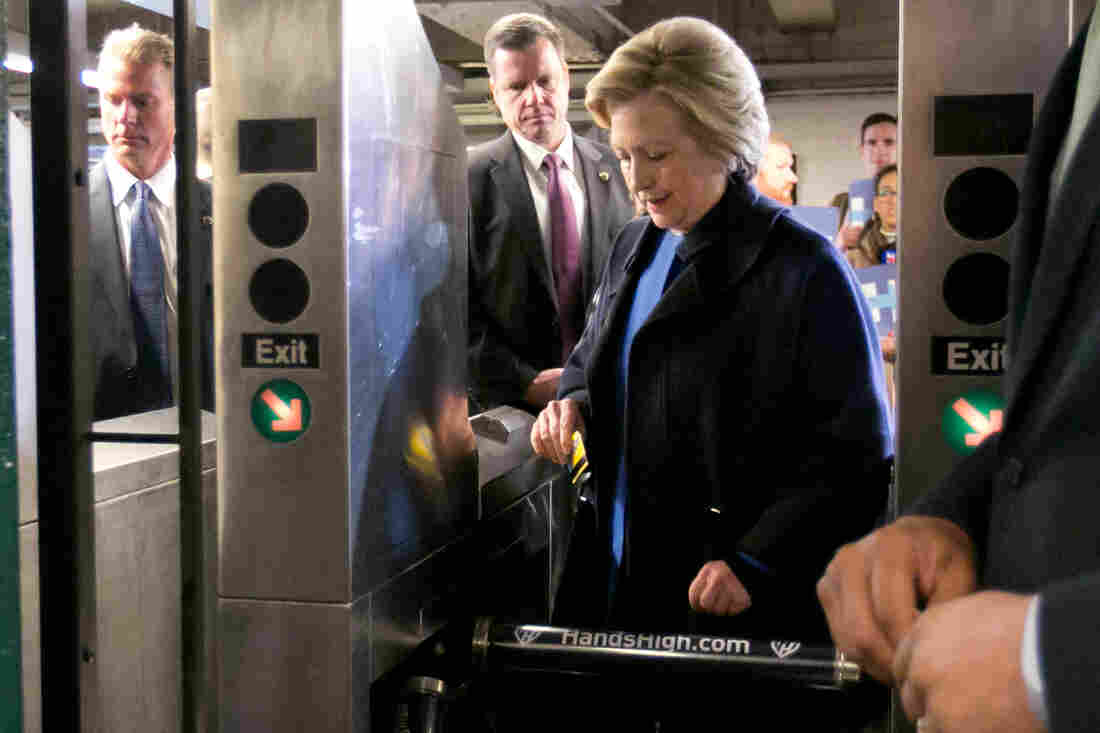 Democratic presidential candidate Hillary Clinton holds her MetroCard as she goes through the turnstile to enter the subway in the Bronx on Thursday. Richard Drew/AP hide caption 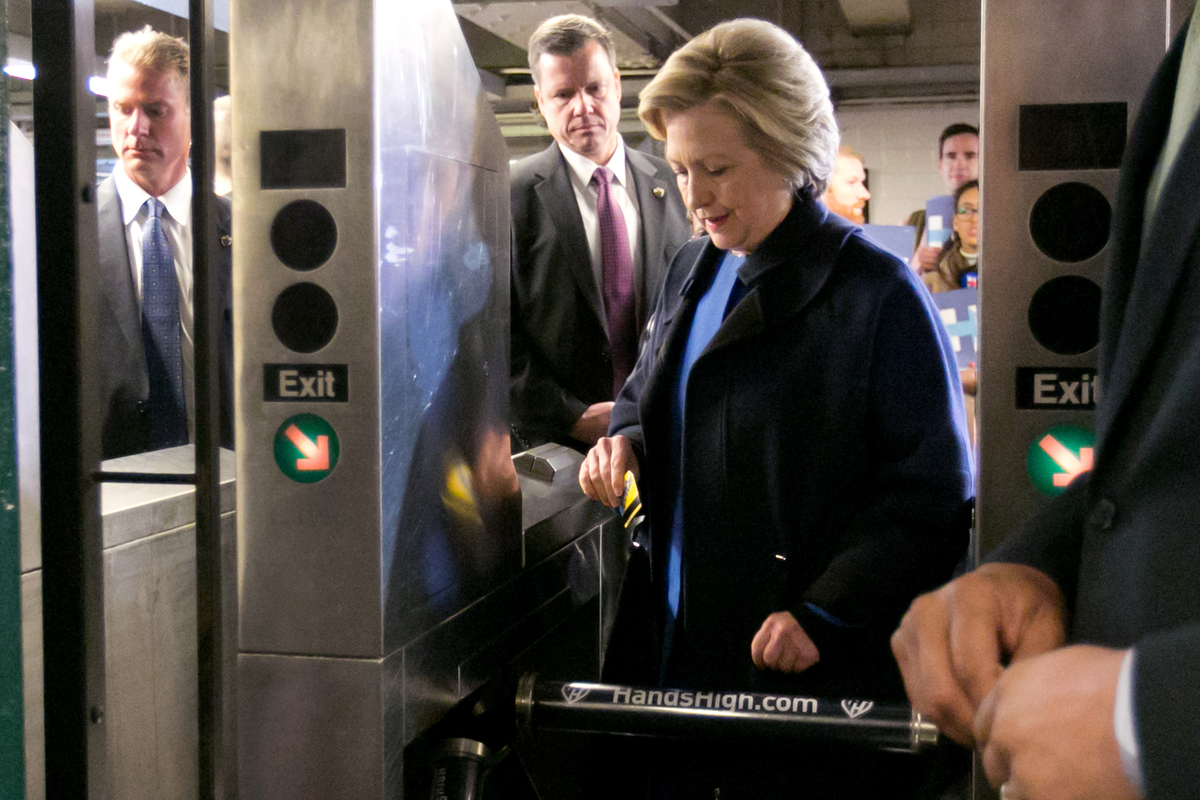 Democratic presidential candidate Hillary Clinton holds her MetroCard as she goes through the turnstile to enter the subway in the Bronx on Thursday.

The things they do for love.

Politicians will eat almost any food, adopt any colloquialism, endure any level of awkward — just to seem "authentic."

The latest example? Democratic presidential candidate Hillary Clinton, riding the New York subway through the Bronx, saying hi to babies and taking selfies along the way.

Depending on your point of view, the event — and it was an event — could be viewed as either a shining testament to Clinton's New York bona fides, or just the latest example of how out of touch she is.

Here's how it all happened.

Earlier this week, in a wide-ranging interview with the New York Daily News, Bernie Sanders admitted to thinking New York City subway riders still use tokens to get on the train. (They don't. Since 2003, cards have been used.)

Soon after, Clinton boarded the subway herself, seemingly to out-New York Sanders. (Both have roots in the state: Sanders was born in Brooklyn and attended high school and college there. Clinton served as U.S. senator from New York for eight years, and still lives in the state.)

Clinton came to the train with Bronx Borough President Ruben Diaz Jr. and an extensive security detail. From the start, things didn't go as planned. It took Clinton five swipes just to get through the turnstile (three more swipes than stops in Clinton's actual ride).

On the train, Clinton tried to engage a young woman with headphones on. That woman was not impressed.

CNN reported that at Clinton's second stop, one passenger, "surrounded by media and nervous Secret Service agents, proclaimed that she needed to get off the train." That passenger ended up missing her stop. (#ThanksHillary.)

I like the person standing behind Hillary Clinton on the subway who left their headphones on, just enjoying their commute.

Once she got off in the Bronx, things went a little better for Clinton. She spoke with locals, stopped by a small shop and even smiled for a few babies in strollers. For all the awkward moments, the candidate did seem to have some fun, and she was met by supporters all along the way, some even chanting their support for her.

But, there was criticism. Clinton hasn't driven since the '90s, and it's fair to assume she's not a regular subway rider. (Her New York home is north of the city in posh suburb Chappaqua.) Some questioned just how long it's been since she'd actually been on a train.

.@jpodhoretz I am going to take a wild guess Hillary has not been on the subway much since this photo op in 1992 pic.twitter.com/IBWBICGntS

Hillary eats at Chipotle to act normal, followed by norovirus outbreak. I'd stay off of NY subway for the next few months#TheFive

There was even a debate online about whether Clinton's subway ride, which some viewed as a campaign event, was legal.

Whatever the case, for us here, the trip seemed a bit lacking. There are several things we'd have liked Clinton to do, to really duplicate a true (or stereotypical) New York subway experience:

-She should have been on a car with subway dancers, working for tips. "What time is it? SHOWTIME!"

-She should have made a stop at a local bodega.

-Once there, she should have brought some lottery tickets.

-She also should have petted the bodega cat. You know there would have been a bodega cat.

-She shouldn't have tried to talk to anyone on the train. 'Cause, yeah, just don't do that.

-Someone should have offered her a mixtape, or some essential oils.

-She should have seen a couple get into a tear-filled argument at some point in her ride.

-She should have had to wait — a long time — for her train.

Clinton, in her struggle for authenticity, is not alone.

Republican John Kasich was dinged last week for eating New York pizza with a fork. (And then making up for it shouting "Mamma Mia" over a plate of pasta in a Bronx deli.)

Ted Cruz made matzo, awkwardly, with children for Passover this week.

Every politician, just about everywhere, eats more fried food than they should, just to be an everyman (or woman).

There is a larger question in all of this: Why are politicians so concerned with proving their authenticity? Or, better yet, why do they think we care so much about it? And that raises yet another one: Do we?

For what it's worth, Bernie Sanders seemed to one-up Clinton by the end of the week. He appeared on ABC's The View, where the hosts gave him his very own subway card. And he ate a piece of New York pizza properly: folded, no fork or knife.