Accessibility links
Paid Family Leave Advocates Celebrate A Big Week, But The Battle's Not Over In New York and San Francisco, lawmakers have taken groundbreaking steps toward more generous leave policies. Still, some business leaders worry how much paid family leave will cost them. 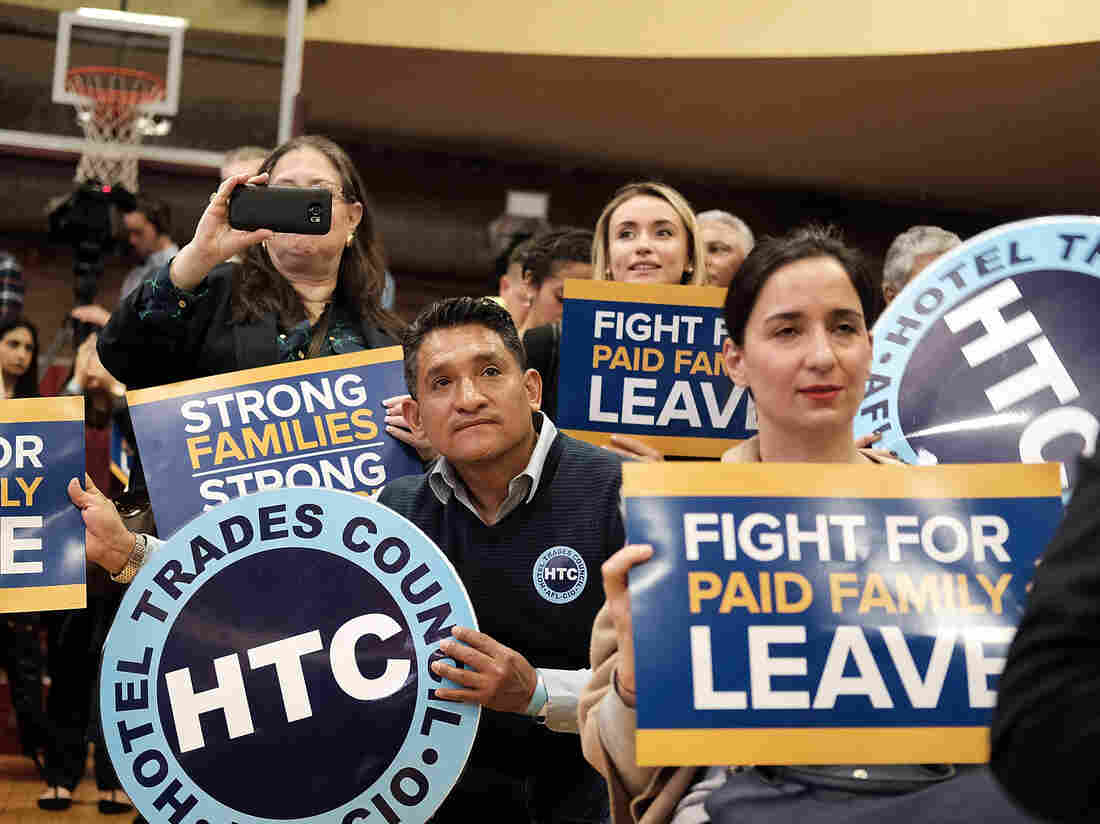 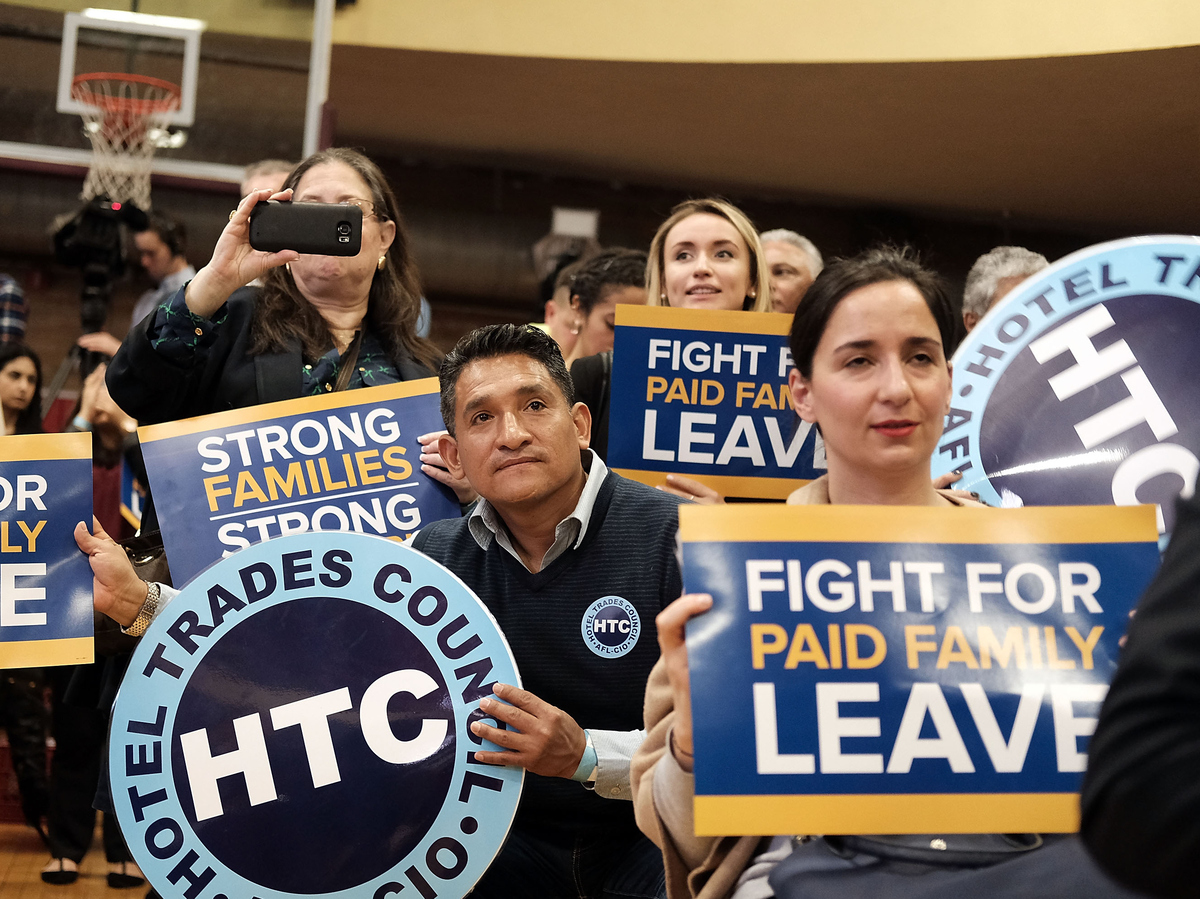 Supporters watch as New York Gov. Andrew Cuomo speaks to promote his paid family leave initiative at a rally in Manhattan on March 10.

It's been a big week for supporters of paid family leave.

The city of San Francisco and the state of New York took groundbreaking steps toward new and more generous leave policies. Advocates hope the moves will create momentum in other places that are considering similar measures.

"I do believe this will pave the way for other states," says Dina Bakst, the co-founder of A Better Balance, a nonprofit in New York that advocates for family-friendly policies in the workplace.

"What we've seen in other fights, like paid sick days and our fights for pregnancy accommodations — it starts local and then it sweeps the nation," Bakst says. "I think we're on the paid family leave wave."

Starting in a few years, workers in New York state will be able to take 12 weeks of partially paid family leave to care for a new child or an ailing parent. That gives New York the most generous family leave benefits of any state in the country.

"We are restoring respect and pride and dignity to the worker with paid family leave," Gov. Andrew Cuomo said at a rally Monday, "which says no one should choose between seeing their child born and earning a paycheck."

The following day, San Francisco's board of supervisors approved a bill guaranteeing most workers six weeks of paid leave at their full salaries.

Both measures go far beyond what federal law requires. The Family and Medical Leave Act mandates that employers offer their workers 12 weeks of leave. But it's unpaid. And even that doesn't apply to many part-time workers.

A few states are more generous and will pay employees roughly half of their salaries for up to six weeks. That idea is now being debated in several other places, including Massachusetts, Connecticut and Washington, D.C.

Paid family leave would have been a big help for Rob and Mandy Keithan. Their daughter, Eleanor, was born prematurely last year, seven weeks before her due date. Neither parent had a job that offers paid family leave to care for her. 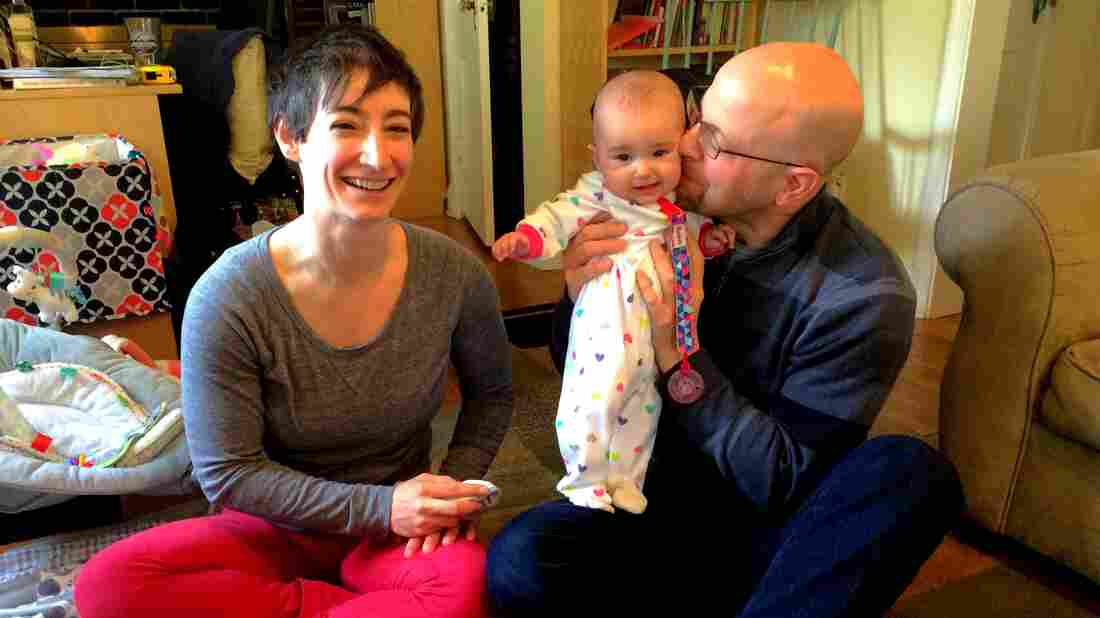 Mandy and Rob Keithan had to take turns to take care of their baby Eleanor when she was born. Neither of them had a job that offers paid family leave. Marisa Penaloza/NPR hide caption 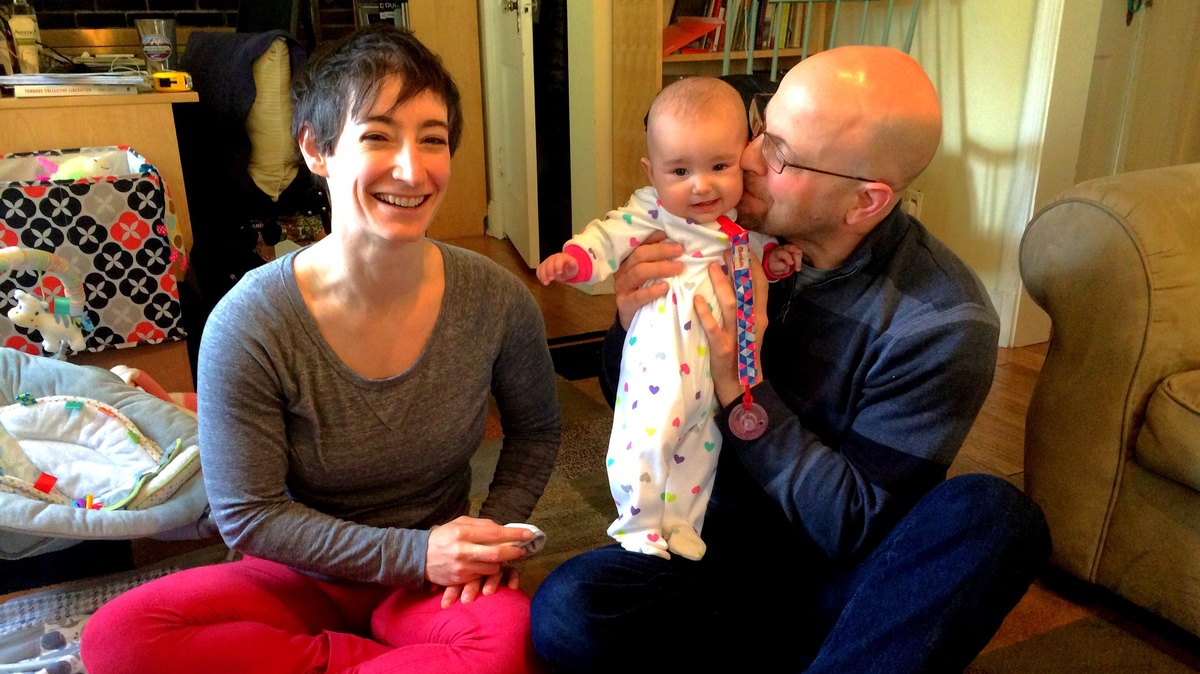 Mandy and Rob Keithan had to take turns to take care of their baby Eleanor when she was born. Neither of them had a job that offers paid family leave.

"So that's seven additional weeks that we have to deal with," says Rob Keithan. "And just make the constant evaluation of, what's the cost of spending time with our baby?"

The Keithans had to take turns staying home from their jobs to visit Eleanor in the intensive care unit and then care for her when she came home.

"We had to calculate every day, every week, every month: Is this something that we could afford to do?" says Mandy Keithan. "When it felt like on the deepest level, being with her was where we needed to be. And it's a terrible thing to have to put a price tag on."

Still, some business leaders worry about how much paid family leave will cost them.

"For small businesses, this really is a hardship," says Zack Hutchins, director of communications at The Business Council of New York State. He points out that New York just adopted a paid leave period that's twice as long as that of any other state. The money to pay for it will come mostly from a tax on employees, not employers. Still, Hutchins says there may be hidden costs when the new law takes effect, starting in 2018.

"There's the very real cost of trying to obtain replacement employees [and] train those employees," he says. "And that's going to fall heaviest on small employers and small businesses."

Many employers are already flexible about giving their workers time off when they need it, Hutchins argues.

But family leave advocates say that's rarely the case for low-income workers who need paid leave the most. They say there's no other developed country in the world that handles family leave like the U.S. does.

"It is an embarrassment for the United States," says Ellen Bravo, director of the nonprofit Family Values @ Work. "Our minimums are in fact minimal, compared to what people need, and what the rest of the world does."

Bravo says the recent victories for paid family leave are encouraging. But she says there's still a long way to go.