Accessibility links
A Web Comedy Series Is 'Walking The Line Between Hipsters And Hijabis' Comics Nadia Manzoor and Radhika Vaz play Muslim immigrants dealing with speed dating, catcalls and other aspects of life in secular New York in their sketch-comedy series Shugs & Fats. 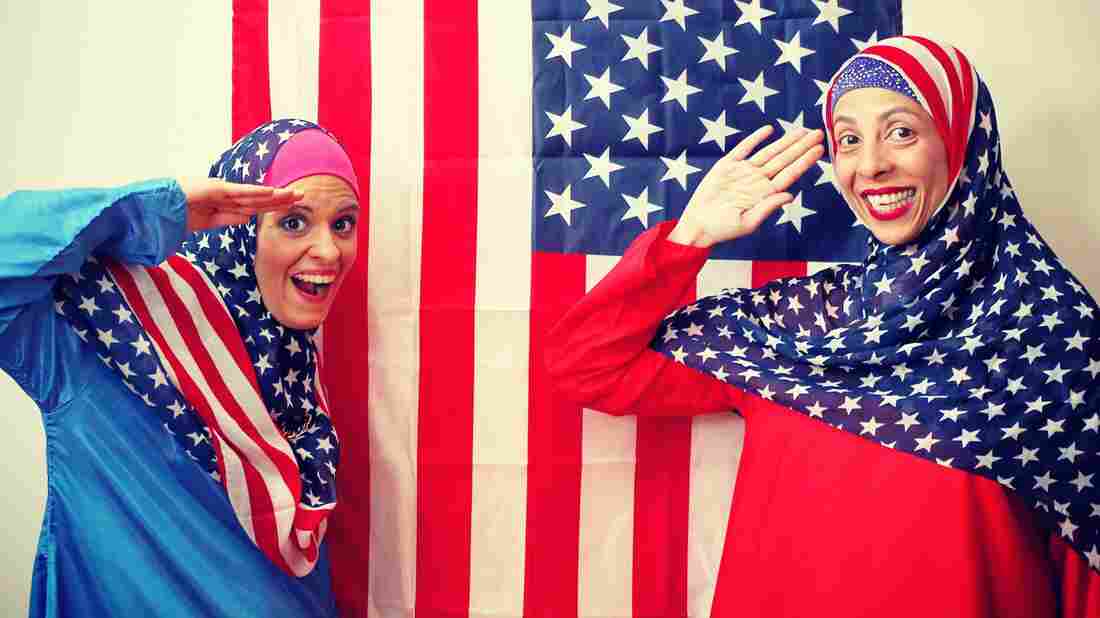 Nadia Manzoor and Radhika Vaz star in the Web sketch-comedy show Shugs & Fats. Season 3 of the show will premiere at the Tribeca Film Festival on April 14 and will be available online on April 15. Conrad Caton hide caption 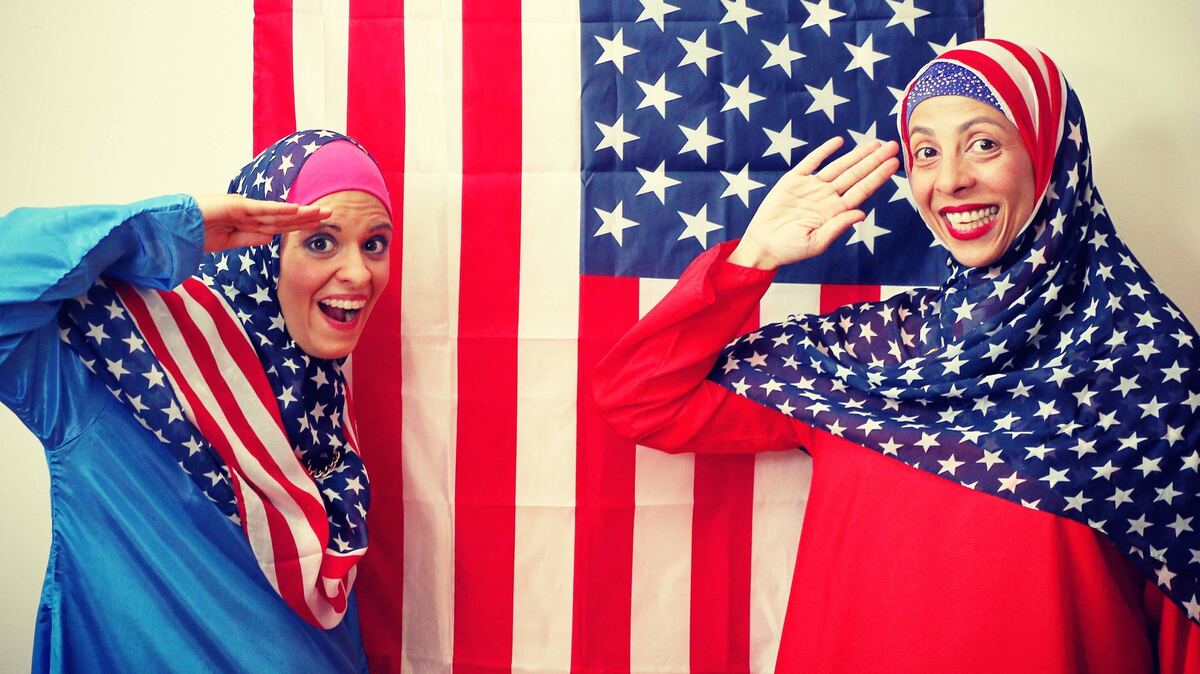 Nadia Manzoor and Radhika Vaz star in the Web sketch-comedy show Shugs & Fats. Season 3 of the show will premiere at the Tribeca Film Festival on April 14 and will be available online on April 15.

Growing up, comics Nadia Manzoor and Radhika Vaz never dreamed that they would one day co-star in a sketch-comedy series about two women in Brooklyn.

"Being onstage was something that I could've never imagined," Manzoor, who grew up in a Pakistani-Muslim community in London, tells Fresh Air's Terry Gross. "The only time I thought I was going to be onstage was as a bride; that's how Pakistani women were on stages."

But now, in the Web series Shugs & Fats, Manzoor and Vaz (who grew up in India) play immigrant roommates whom they describe as "walking the line between hipsters and hijabis." Manzoor is Shugufta "Shugs", a 20-year-old enthusiastic millennial, while Vaz is her distant relative Fatima, also known as Fats. 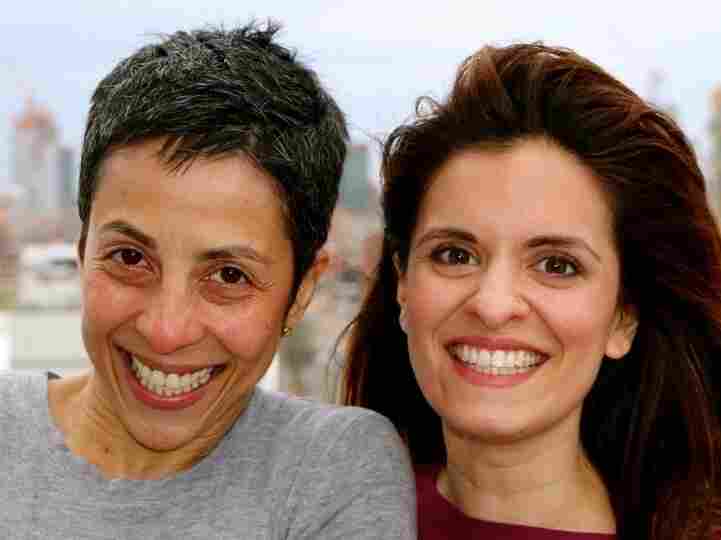 Vaz and Manzoor both say they never thought they would grow up to perform comedy. Nadia P. Manzoor hide caption 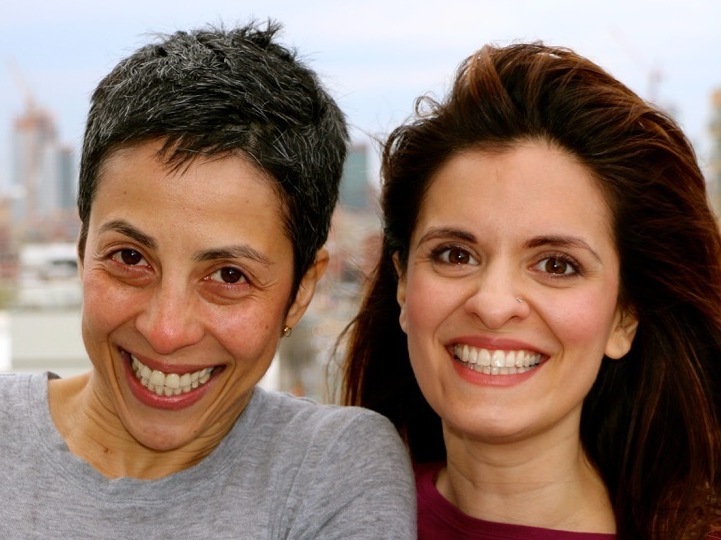 Vaz and Manzoor both say they never thought they would grow up to perform comedy.

"[Fats] is in her mid-40s," Vaz says. "She's got these very conservative views about marriage and that's what she keeps trying to put on Shugs all the time."

Though Vaz is not Muslim and Manzoor is no longer a practicing Muslim, their characters in the show are Muslims who wear hijabs. Manzoor says the hijabs are a visual reminder of the challenges the characters face as they try to reconcile their cultural and religious beliefs with speed dating, catcalls and other aspects of life in Brooklyn.

"The fact that they wear [hijabs is] sort of a metaphor for traditional conservatism," Manzoor says. Shugs and Fats are "two women who are also interested in the secular world and interested in things that are down in Brooklyn."

On why their characters wear hijabs in the series

Radhika Vaz: With me, I'm not Muslim and I've obviously never worn a hijab in my real life. Back in, I would say, 2004, 2005, I was in New York and auditioning for all kinds of little independent plays and film and things like that, and I would repeatedly get called in — this is post 9/11 obviously — ... for the mother of the young man who may or may not be recruited to become a terrorist. ...

At the time I was in a sketch-writing class and I was so upset by these auditions I was going out on that I wrote a character and I called her The Terrorist's Wife. And my thing was that all women really are, at the end of the day, so similar regardless of what they wear, and a lot of the time we think that because a woman is dressed in hijab she's going to be a certain way, and she's going to react to certain things a particular way, we put all of this on people. My character was the opposite. I wanted to flip that whole thing.

On a sketch where Shugs gets her period

Vaz: That really comes from experience that I've had firsthand in India, because in the Hindu culture, if a woman has her period she doesn't go into any kind of place of worship, she doesn't go into the kitchen. ... To this day and even in cities, the fact is a lot of this stuff is still very much taken into consideration, so it was something we both wanted to do.

I think the idea of a woman having her period, a lot of people know it's such a normal thing, but it's made into such a big thing, we have to keep it so secret and all of that. So Fats is obviously coming very much from that point of view, and the moment Shugs comes out complaining about having, "I got my period and my stomach hurts," Fats just quarantines her. So we've taken it to an absurd level of, "You have your period, you got to be quarantined." So we have "Do Not Cross" police tape and the episode has hazmat suits and ... it's like she's disposing of a bomb, basically.

On how conservatism affected Manzoor's self-esteem growing up

Nadia Manzoor: I think it made me much more self-conscious of my body, frankly. Walking down the street I was always very aware of the male gaze or people looking at me, and always trying to cover that. As a result, I think it really affected my confidence. I think it put me in situations where I made bad choices, kind of not trusting men in a way that made me more susceptible and vulnerable to situations that didn't turn out so well.

I had an eating disorder when I was about 24, extremely skinny, and always kind of saw the forefront of my existence being through how other people evaluated my body. I think that's typical of women in general, of how beauty is supposed to be the No. 1 standard of how we're measured. Because I think that was just reinforced in my home context and in my cultural context. ...

When I was 6 or 7 my dad would take my French fries and say, "[Nadia], you are getting too fat," and he would give them to my brother, you know? There was always this emphasis of having to sacrifice and giving it to the man. That was just so clear-cut in my family.

On how Nadia was treated compared to her twin brother

Manzoor: My brother's academic pursuits were really encouraged and he knew all of the capitals of the world and he was in every single sports team. ... The lessons that I was getting was on not getting fat and my academic pursuits, they just weren't really encouraged. It was like, "If you're good at something, it's fine," but it wasn't something that was considered that she's going to be a leader. My brother was going to be the leader and take over the world, and I just had to remain beautiful.

Yeah, it did piss me off, and I think I internalized a lot of that because I didn't have the articulation and the confidence, frankly, to kind of rebel with my parents against that, but I think in my own way I did, because I continue to follow the things that inspired and attracted me, and I didn't fall down the path of just blindly getting married when I was 20.

On the conflict between being herself and pleasing her family

Manzoor: Because of how I grew up, I was a total pathological liar. I lied to my family all the time about my friends and the fact that I was in a relationship, and there are lots of things that I hid to my Western friends about things I was embarrassed about, about my culture. ...

There were these really extreme ideologies that I was trying to reconcile with, and there didn't seem to be a balance that I was able to adopt. ... There weren't role models that had adopted this East/West ideologies into one, and I was constantly being told that the Western world was a sinful world ... but obviously I was a Westerner.

So I had so much conflict within myself and something that I wasn't able to balance. It definitely led me to being very conflicted and it was only when my mother passed away and I left my family and I came to America that I was able to unpack all of these conflicts and all of this confusion about who I was and begin to find my own path and my own sense of where my morality came from. But that took a really long time.

On white wedding veils and the importance of virginity

Manzoor: There is. It's this expectation that a woman is supposed to be pure, untouched, so that she's worthy of a man. That being why a woman is worthy, to me, it just diminishes us as human beings. So whether it's being covered in a veil or whether it's wearing a white dress because you're saying "My virginity is the most important thing about me," that's oppressive, just inherently.

On Vaz's returning to India to do stand-up

Manzoor: What she's doing in India is really ... revolutionary. It has not happened before. ... Being an Indian woman on a stage talking about her vagina in a comedic way and bringing attention to real important issues is completely revolutionary, so it just has the power to spark change in such a powerful way.