Accessibility links
John Kasich, The Candidate The Most Voters Think Is OK The Ohio governor says there are "two paths" for the Republican Party — one of "darkness" and the one that he's on. That may resonate more with general election voters than primary voters, though. 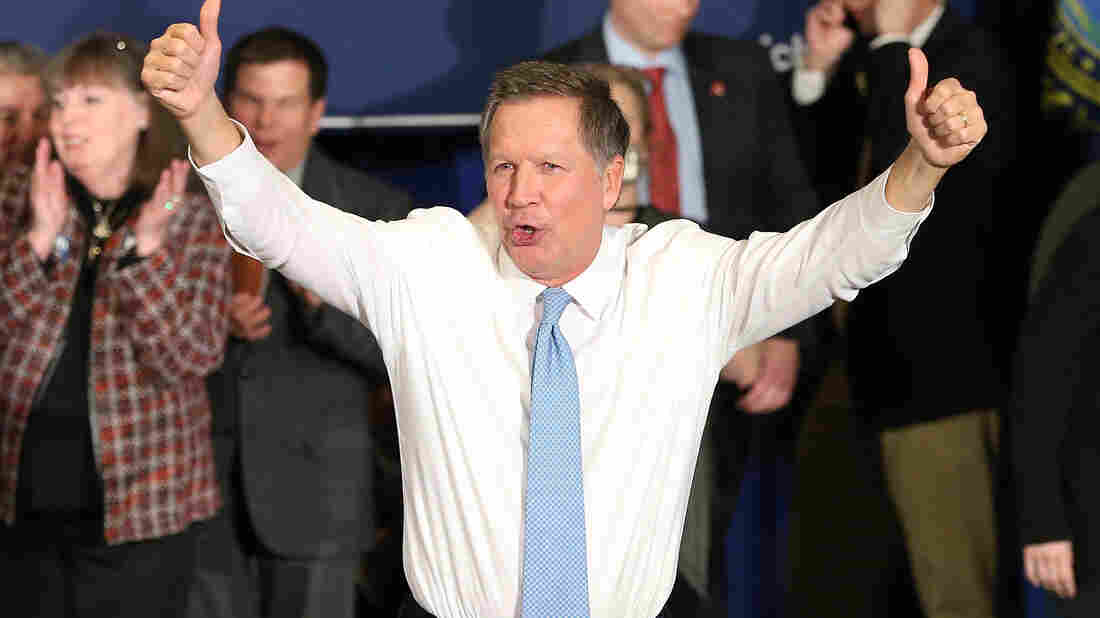 In a Republican race marked by anger and anti-establishment fervor, Kasich is running the optimistic campaign. Is that enough to win? Andrew Burton/Getty Images hide caption 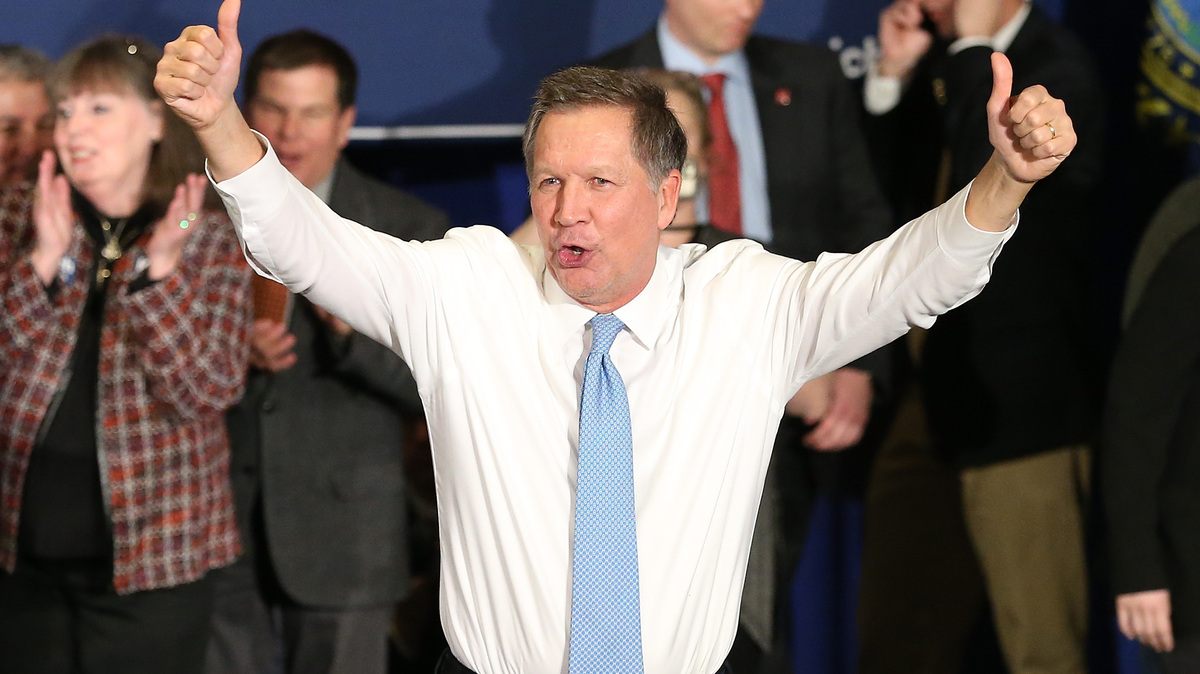 In a Republican race marked by anger and anti-establishment fervor, Kasich is running the optimistic campaign. Is that enough to win?

John Kasich says the nation has a choice between "two paths." On one path is "fear" and "darkness." On the other path is — guess who? — a President Kasich.

In a speech on Tuesday, Kasich presented a stark choice between pessimism and optimism. The "path to darkness," he said, is a "political strategy based on exploiting Americans instead of lifting them up [that] inevitably leads to divisions, paranoia, isolation, and promises that can never, ever be fulfilled."

The other, he said, was about positivity: "We always roll up our sleeves and get to work when the going gets tough. And we have never, never, ever seen the American spirit fail."

Though he framed it as being about America's choices, it was pointedly about Republican voters' choices, with an intent to draw sharp distinctions between himself and his GOP presidential nomination opponents, Ted Cruz and Donald Trump.

Kasich never mentioned them by name, but he made clear jabs. He portrayed Trump as a power-hungry spotlight seeker. "Some who feed off of the fears and the anger that is felt by some of us, and exploited, feed their own insatiable desires for fame or attention," Kasich said. "That could drive America down into a ditch and not make us great again."

He also criticized Cruz's policies, calling some of them "disturbing," like the Texas senator's plan to target "Muslim neighborhoods," and casting others, like Cruz's proposed value-added tax, as unrealistic.

The "two paths" rhetoric closely mirrors the common characterization of the GOP race as having two "lanes." Trump and Cruz are prime examples of anti-establishment, "outsider" candidates (Cruz, despite being a senator, has enough enemies on Capitol Hill, uberconservative views and anti-Washington rhetoric to put him in this camp).

Kasich, as a sitting governor with mainstream Republican views, is the only "establishment" candidate left in the race, and he's losing badly with a Republican electorate that is decidedly frustrated with government.

He may be losing in the polls and in the primaries, but there's a case to be made, based on both the GOP's own analysis and a deeper dive into the polls, that he is the best remaining hope for the party in the 2016 general election.

In recent national polls of GOP primary voters, Kasich never comes out on top — far from it. Trump repeatedly gets the most support, with Cruz close behind and Kasich a distant third.

But buried in several polls is evidence that Kasich would do well in a general election. A recent Pew survey suggested Kasich is the most agreeable candidate — from either party — among a broader universe of registered voters. Only 20 percent of those voters said Kasich would make a "poor" or "terrible" president. The next-lowest total was Bernie Sanders, at 36 percent.

Another Bloomberg poll found that U.S. adults view Kasich more favorably than they view Cruz or Trump (or Sanders or Hillary Clinton, for that matter). Kasich's net favorability (that is, favorability minus unfavorability) was plus 14, compared with Cruz's negative 23 and Trump's negative 39.

It's true that Kasich has taken a while to make it onto voters' radars, but another poll suggests that as he has broken through, they seem to have largely liked him. As of May 2015, 63 percent of registered voters said they had never heard of him, according to a Fox News poll. Today, it's 16 percent. Meanwhile, his favorability grew by 28 points and his unfavorability by 19. Kasich was also the only Republican candidate with net-positive favorability in that poll.

You can't really do a similar analysis on Trump; Americans have known who he is for years. But Cruz is a good counterexample: From May 2015 to today, his "never heard of" count fell from 29 to 4 percent. Over that period, though, his unfavorability rating grew by 18 points, while his favorability grew by just 9. 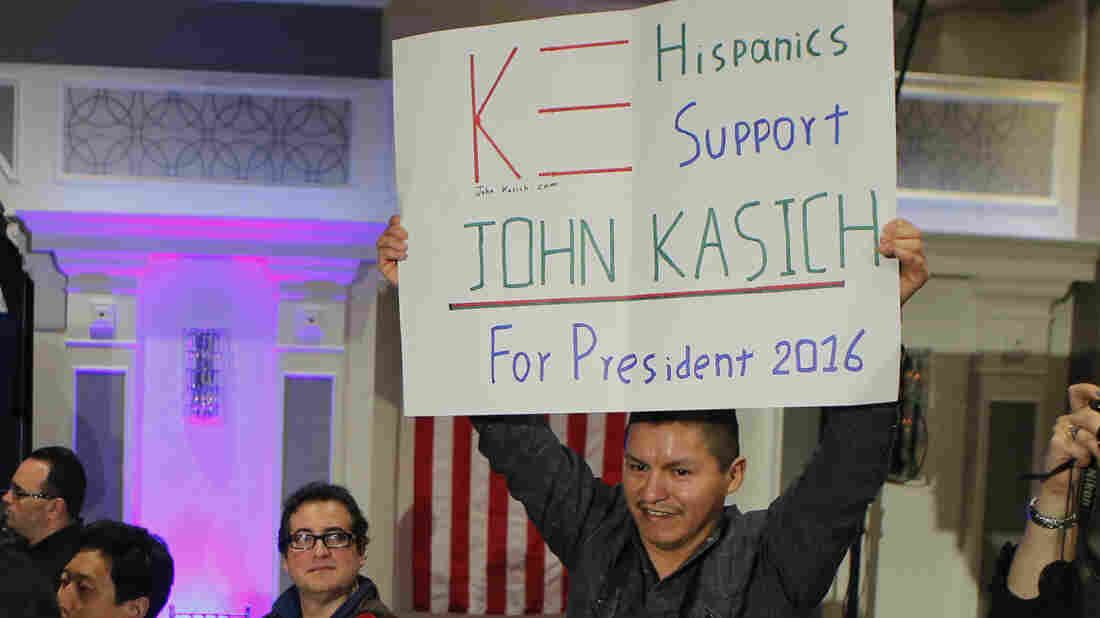 The GOP said three years ago that it needed to reach out to a more diverse crowd. Kasich is trying to do that. Eduardo Munoz Alvarez/Getty Images hide caption 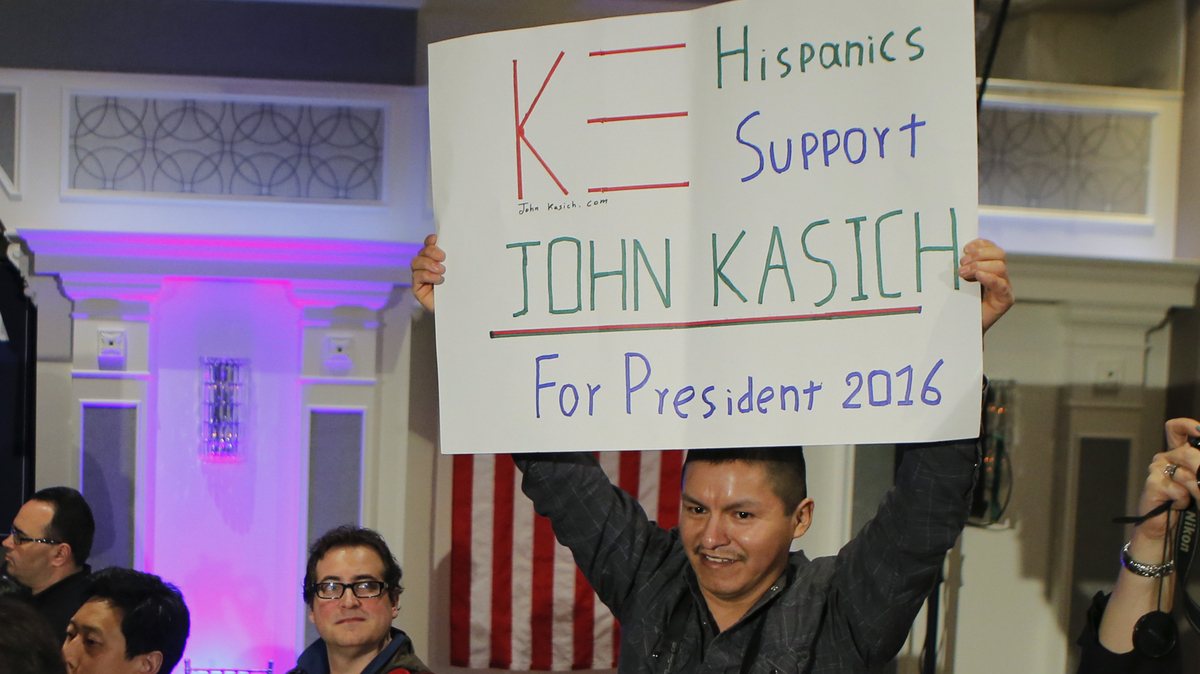 The GOP said three years ago that it needed to reach out to a more diverse crowd. Kasich is trying to do that.

The unsexy case here is that Kasich is acceptable to many Americans right now — not well-loved, just not alienating — and that extends across the aisle to include even Democrats.

Consider that in that Pew poll, Kasich had the fewest people saying he'd be "poor" or "terrible," and the most saying he'd be "average." It's not a ringing endorsement, but an unenthusiastic vote in November counts just as much as an enthusiastic one.

That covers the electorate, but then, what does the party want? Especially in contrast to Republican front-runner Trump, the "path" Kasich describes is a close approximation of the path the RNC described in its so-called autopsy after losing the 2012 presidential election.

That report advised the GOP to be more inclusive and caring: "We need to campaign among Hispanic, black, Asian, and gay Americans and demonstrate that we care about them, too," the RNC wrote.

Kasich nods to that inclusivity often. In Tuesday's speech, he noted how some Americans blame the country's problems on "people with more money or less money, people with different-sounding last names or different religious beliefs or different-colored skin or lifestyles or whatever."

He also routinely acknowledges that while he doesn't agree with same-sex marriage, it's settled law, and he's not going to try to change it.

He's also a part of what the report called the party's "gubernatorial wing," which it painted as far more successful than its "federal wing" at gaining more diverse support and advancing its policies. That autopsy even name-checked Kasich, citing how Ohio's budget shortfall disappeared and economy grew during his governorship.

But he's still a conservative. He may have promised immigration reform (which, by the way, that GOP autopsy report also advocated), but as Slate's Jim Newell argued in February, he's no moderate. Kasich also favors deregulation, cutting taxes, and block-granting food stamps. He also signed a bill this year to cut government funding of Planned Parenthood in Ohio.

All of which is to say that being the most mainstream Republican candidate left in the race certainly doesn't strip him of his conservative cred, meaning he could still appeal to a Republican base, along with the potential general-election voters who seem to find him acceptable.

But a few data points in national polls don't make a president, much less a nominee, and after all Kasich has been unable thus far to garner much enthusiasm, votes or delegates in the GOP primary. Those things, by the way, are the keys to winning the nomination.

Not only that, but even as the "establishment" candidate, Kasich is far behind in political endorsements. He has only one more major endorsement than outsider Trump, according to FiveThirtyEight's endorsement tracker.

And while he may perform well in a general election, the problem is that he would have to win the nomination first. The poll numbers are much less encouraging here.

Plenty of Republican voters think he'd be an average to great president, as Pew found, but few are exactly pumped about him. A recent CNN poll found that only 19 percent of Republicans say they're "enthusiastic" about Kasich, compared with 28 percent for Cruz and 40 percent for Trump.

True, only 17 percent say they'd be upset if he were the nominee (compared with 14 for Cruz and 21 for Trump) but the huge number who are "satisfied but not enthusiastic" or "dissatisfied but not upset" at the prospect of a Kasich nomination are unlikely to propel him to the top of the ticket.

The big problem he faces is an angry Republican electorate at a time when he is pointedly not giving an angry message. The case that GOP voters should choose Kasich simply because he is electable is a case that asks voters to compromise — something that many are unwilling to do. Then add to that that Kasich advocates compromise himself, saying a president should reach across the aisle. That may get things done in Washington, but it doesn't appeal to many in the GOP base.

One other potential problem: It's true that Kasich finally, at long last, has cut through the noise, rising in the polls and picking up news coverage. But that means increased scrutiny. He still has lower name recognition than Trump and Cruz, so many Americans are still discovering Kasich. And as more people pay more attention, there is what political scientists Lynn Vavreck and John Sides call the "discovery, scrutiny and decline" cycle.

The more voters know, the more they might like him — maybe even get more enthusiastic about him. But the more the media and opposition pay attention to him, the more his weaknesses will be highlighted.

And that will drag down his favorability numbers. Consider that in that Pew poll, 70 percent — 70 percent — of Democrats and Democratic-leaning voters said he'd be a great, good or average president. When subjected to the pummeling of more attention (and more attacks), that number would certainly fall (and he'll do worse in those hypothetical general election polls, which already arguably are suspect).

That gives him a lot of cushion to fall. But the question then is whether his favorables fall as low as Cruz and Trump's. Kasich has campaigned for months in their shadows. The problem he faces is the same difficult one that all of the failed GOP contenders have faced thus far — whether he can make himself more well known, especially given all the attention surrounding the front-runners, without collapsing.