Accessibility links
Movie Review: GREEN ROOM Green Room, from the director of the well-regarded thriller Blue Ruin, is the violent and inventive story of a touring punk band that gets in way over its head.

'Green Room': A Choreographed Thriller With A Spontaneous Beat

'Green Room': A Choreographed Thriller With A Spontaneous Beat 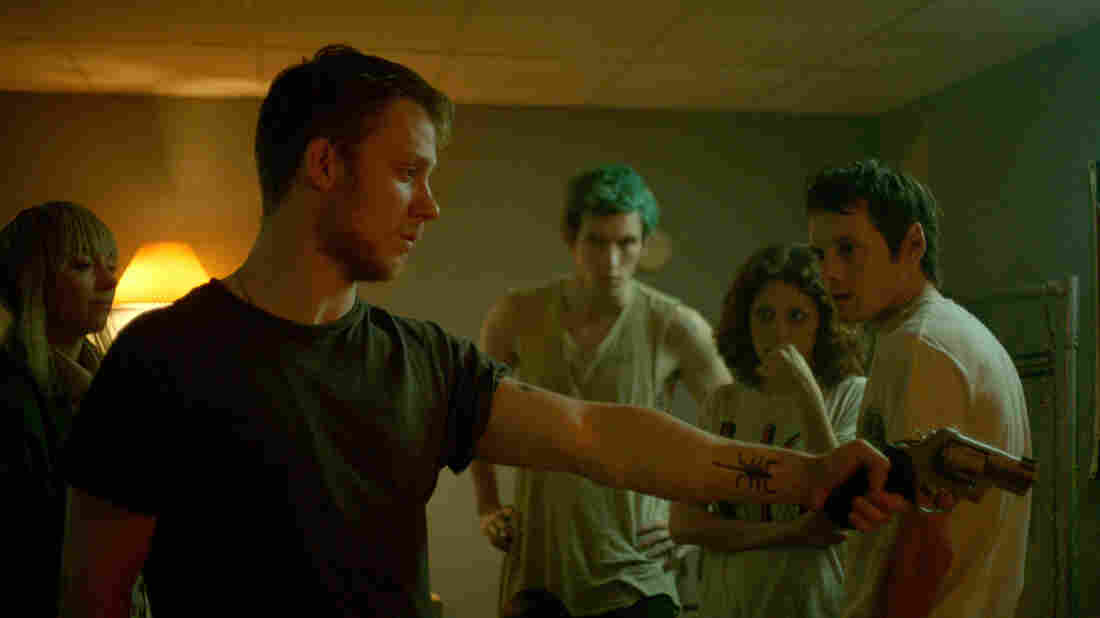 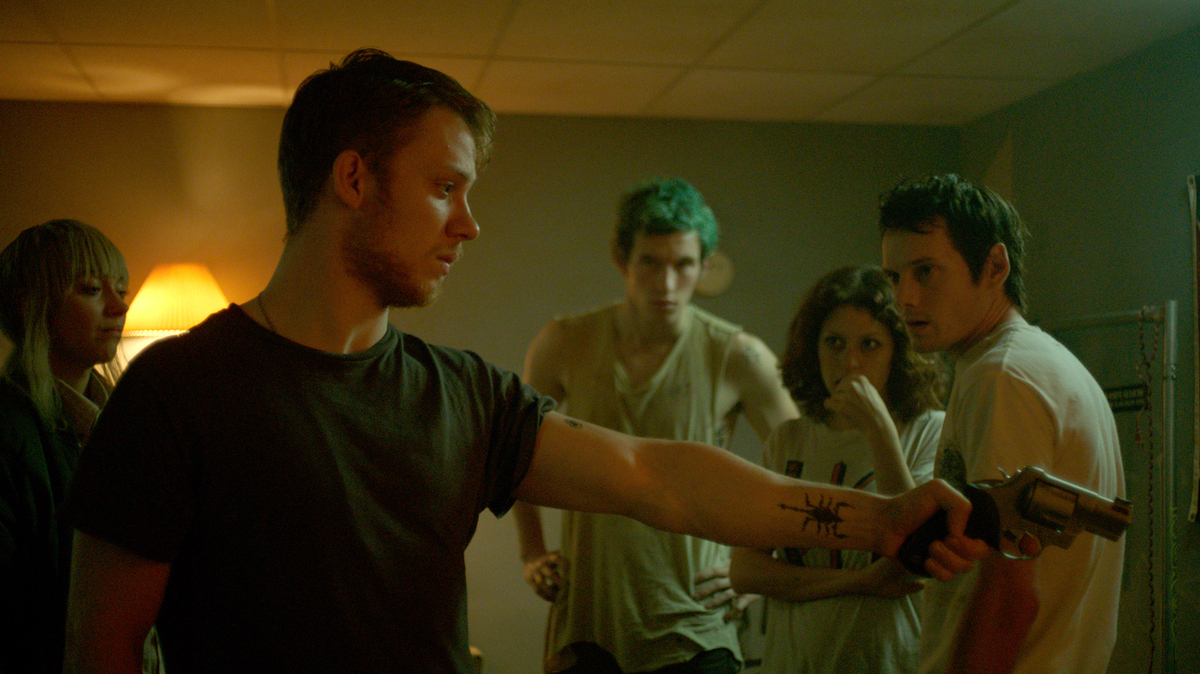 Scott Patrick Green/Courtesy of A24 Films

There's a great running joke in Jeremy Saulnier's Green Room where a college journalist from the Pacific Northwest asks members of The Ain't Rights, a touring punk band from Arlington, Va., what they'd choose as their "desert island" band. The expected answers might be Black Flag or Misfits or Minor Threat, but after giving it some thought, their choices are mostly popular favorites like Prince or Madonna, street credibility be damned. The implication is that punk doesn't fully live on a record, where its energy and spontaneity are inherently bottled up. It has to be experienced in the moment, with screaming amps and a mosh pit roiling with anger, ecstasy, sweat and violence.

Fans of hard-hitting siege thrillers like Straw Dogs or Assault on Precinct 13 may well anoint Green Room a "desert island" movie one day, but Saulnier's commitment to visceral, gory, in-the-moment jolts channels the punk spirit to exceptional effect. Much like Saulnier's last movie, the Coens-esque revenge tale Blue Ruin, Green Room thrusts ordinary people into a desperate situation and watches, in horror and bemusement, as they messily improvise their way through it. The film's "punk versus skinheads" hook gives it the quality of a blood-spattered graphic novel, but there's a sophistication to the writing and direction that transcends brute conflict. The thrills aren't entirely cheap.

For one, Green Room suggests that Saulnier could have made a road movie about the travails of a modern-day punk band and left it at that. The film opens with The Ain't Rights — Pat (Anton Yelchin), Sam (Alia Shawkat), Reece (Joe Cole) and Tiger (Callum Turner) — stalled out in a cornfield en route to their latest gig. With no money to fill the tour van, they've been siphoning gas from parked cars to inch their way farther down the road. When they finally make it to town for the show, they're shuffled into a restaurant/bar — shades of the Bilgewater's chain in Hedwig and the Angry Inch — and come away with a door cut of less than $10 apiece. Feeling guilty, the poor kid who made the arrangements gets them booked at a skinhead bar where they can net $350.

The Ain't Rights are anxious to leave immediately after they arrive at this isolated spot — and the white-power types in the audience offer a mixed reception to their set. But when Sam witnesses the aftermath of a murder backstage, she and the band are not allowed to go, and their only ally is Amber (Imogen Poots), the victim's emotionally shattered best friend. Vastly outnumbered and outgunned, they enter into a series of tense negotiations with the bar's proprietor, Darcy (Patrick Stewart, cast both to type and far against it), who narrows their options before taking them off the table altogether.

The symbols and ideology of backwoods white supremacists are treated more as window dressing than social commentary, which firmly aligns Green Room with a long tradition of exploitation thrillers. Saulnier is more interested in working through the bad chemistry of a punk scene where malcontents from across the political spectrum can sometimes occupy the same space. Mostly, though, Saulnier excels at writing his heroes into a corner, sometimes literally, and figuring out ingenious ways to keep them in the fight. He doesn't cheat around the problem through trap doors or other such magical happenstance, and he doesn't turn The Ain't Rights and Amber into superhumans once their lives are at stake. They try and often they fail, with gut-wrenching consequences.

Though cannily engineered as a crowd pleaser — it could be seen as a Die Hard for viewers with stronger stomachs — Green Room has an abiding punk spirit that informs every aspect of the production. It's cut to a tight 93 minutes, made tighter by jagged edits that always come a beat or two before they might be anticipated. Saulnier also counts on the audience to be smart and aware of genre conventions, so he can defy them at every turn; as with Blue Ruin, human error scuttles best-laid plans and payoffs come only after a series of desperate contingencies. The secret to Green Room is that it's an expertly choreographed thriller that feels like it's being made up on the fly. It takes a lot of careful planning to be this spontaneous.