Accessibility links
Movie Review: JUNGLE BOOK Jon Favreau directs a new version of The Jungle Book, in which Bill Murray and Christopher Walken help out with the voice work and the story considers the threats to the animals' way of life. 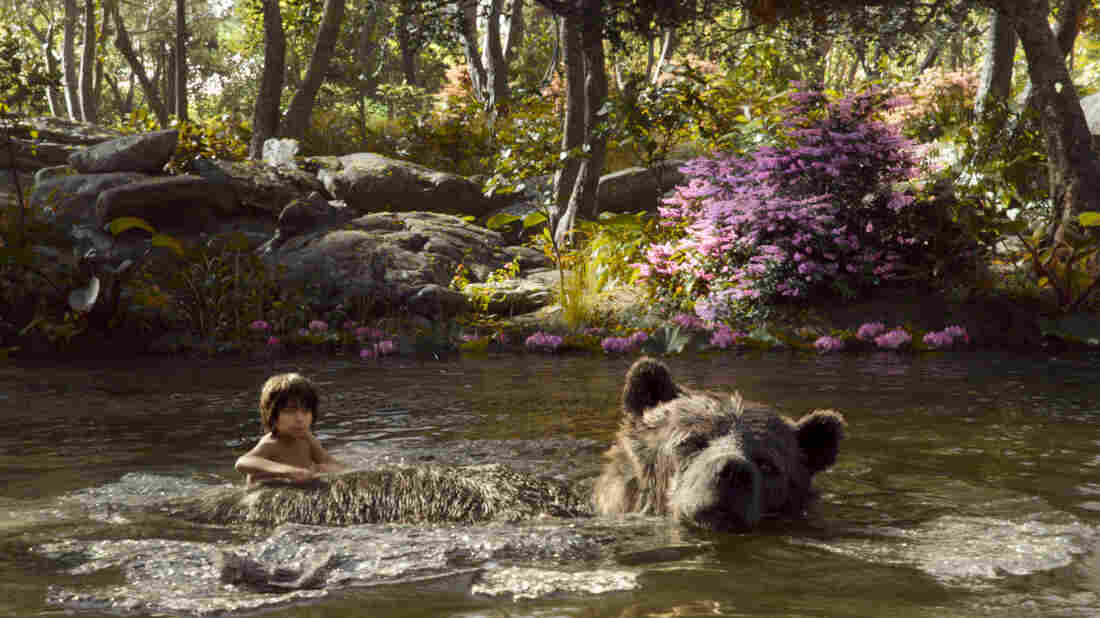 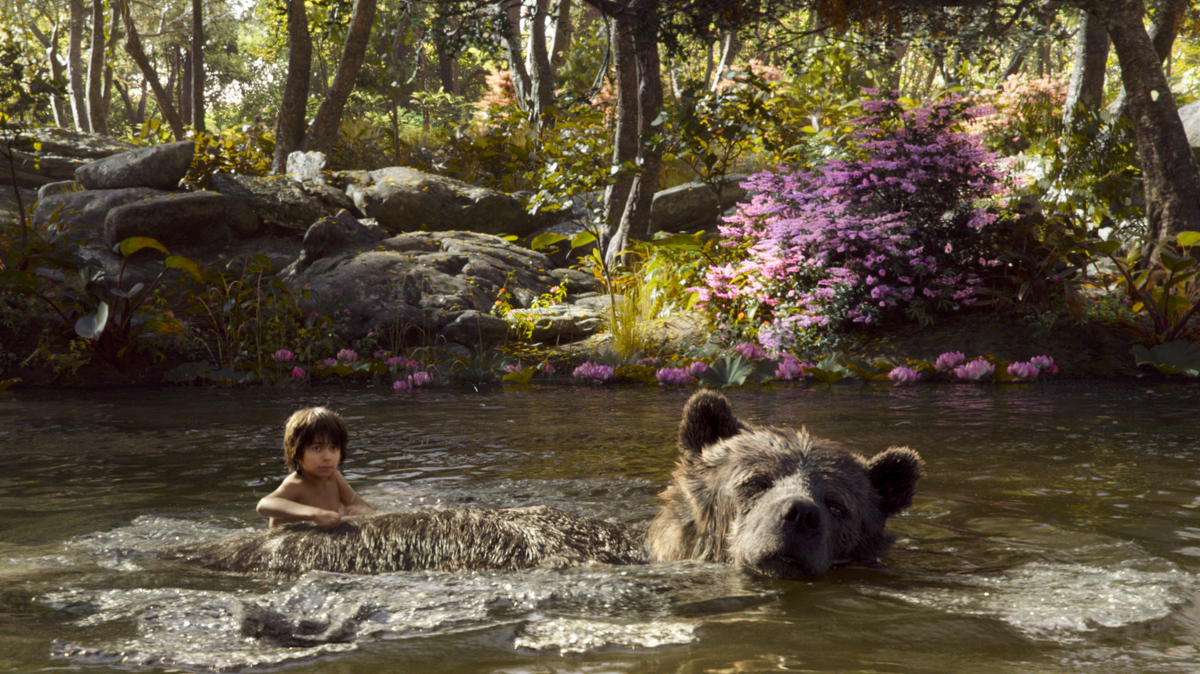 Mowgli and Baloo in The Jungle Book.

There are all the other storybook villains who have prowled their way into the Disney canon, and then there's Shere Khan the tiger. In Rudyard Kipling's The Jungle Book, the savage cat will stop at nothing to hunt down Mowgli, the young "man-cub" who was orphaned in the wilderness of India's impossibly lush Madhya Pradesh region and raised by wolves. Shere Khan's determination seems vicious, until you remember that he's a natural predator trying to dominate the only animal in town who outranks him — and that Mowgli's is the very species that will eventually render Bengal tigers like him endangered in the process of destroying jungle habitats the world over. Shere Khan's "eat all men" stance really just makes him a radical conservationist.

"But Mowgli's just a kid," you may say, to which this latest Jungle Book's wolf-pack head Akela has the perfect answer: "In some tribes, the runts get eaten." This is no safe Zootopia: One of the many delights of director Jon Favreau's update is how it embraces both the constant threat and the constant wonder of the jungle. They are two sides of the same coin, naturally.

Kipling's book has been the seed of many a screen project, most unfaithful (but he himself borrowed parts of it from other sources, so true fidelity seems like a meaningless ideal here). There was the 1942 Technicolor version starring a young Sabu and real animals, and two unrelated sorta-sequels in 1994 and 1997—a sequence that will be repeated with this movie and Warner Brothers' own unrelated remake due in 2018. (They travel in packs. It's the law of the jungle.) The best-known, though, is Disney's bright and colorful 1967 animated musical that gave us the jazz-pop standards "The Bear Necessities" and "I Wanna Be Like You." This is the version the latest iteration bows to, much as its characters bow to the elephants who form their jungle's creation myth.

Though darker in tone, and more suitable for older kids, Disney's new take retains the undeniably fun spirit of the earlier film. The dialogue is clever (Justin Marks is the credited screenwriter), and newcomer Neel Sethi is captivating as Mowgli, shining through a matty full head of dark hair as he navigates his all-CGI jungle and pets a fake bear with the utmost conviction.

The film is technically live-action, in the sense that there's a real-life Mowgli wandering around an L.A. studio set. But in practice it's just as animated as its predecessor, since Mowgli is the only real thing onscreen. What's impressive is how the animals can boast realistic physiques and motion-capture-aided movements, with fur that rustles in the wind, while also taking on a cartoon expressiveness that feels utterly fitting rather than off-putting. The gifted special-effects team adopted many of the techniques used on Avatar, including shooting in 3-D, which is convincing enough that some critics (ahem) may or may not have flinched at a falling tree branch. Cinematographer Bill Pope, who's seen his cameras through many a digital blockbuster, conjures a sweeping expansiveness that lets us sense the rustling life in every corner of the "wild." (There may also be a visual homage or two to The Lion King.)

The voice cast is top-notch. Somehow it feels exactly right to have Bill Murray play crafty, fun-loving bear Baloo, whose enthusiasm for his new human companion is wholly genuine, and to pair Christopher Walken with the orange gigantopithecus (that's "really big ape" to you, buddy) King Louie, who lords over his primate kingdom in shadow like General Kurtz. And it also feels right to let Murray and Walken each reprise their characters' signature musical ditties in lazy Dixieland lounge-singer rhythms that don't need to follow the beat.

The wolf couple who raise Mowgli as their own are played by Giancarlo Esposito and Lupita Nyong'o with a warm pack mentality, while Ben Kingsley and Scarlett Johansson drop in as, respectively, watchful panther Bagheera and siren snake Kaa. And then Idris Elba — growling, snarling, vicious — renders Shere Khan like, well, the predator he is. He's the one whose aggressions toward Mowgli propel the child from the safety of the wolfpack into the untamed land beyond, and ultimately to the "red flower" of fire, the devilish work of man and the biggest threat to the jungle's way of life.

It may be Shere Khan's Burden to be the eternal villain of the piece, but the rest of the film is there to benefit. Favreau has quietly become a gifted helmer of distinctly human projects, from the big (Iron Man) to the small-ish (Chef). The Jungle Book has only one human, but it will delight many more. Especially the runts.