Accessibility links
Review: Wire, 'Nocturnal Koreans' A brilliant new album by an always unpredictable band, Nocturnal Koreans is a view of the more experimental side of Wire, mysterious and potent. 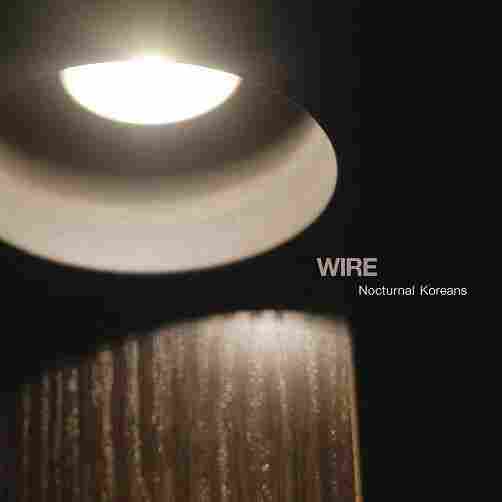 Wire is like that old friend I see every once in a while. Each time I'm not sure what to expect: upbeat sometimes, complex and multi-layered other times or simply straight to the heart. In all cases, Wire is a welcome friend. My relationship with the band began in 1977 with the high-speed and extraordinary punk record Pink Flag. Then, just nine months later, they gave birth to one of my favorite arty rock albums ever, Chairs Missing. Wire's brilliant new record, Nocturnal Koreans, comes out just about a year after its 2015 self-titled album, and the pair have sent me back — at least in my mind — to the first days and months of falling in love with the band.

This new record was in fact hatched during the same sessions as Wire, and the two albums are very much like the band's 1977 and '78 albums in the way they offer different sides of the band. Pink Flag and Wire are direct and powerful, made by a band playing together with very little studio trickery. The songs on Nocturnal Koreans have a different attitude — an anything goes attitude — that shows the band using the studio in any way it can imagine to create a sound. What I hear is closer to the sound from that legendary Chairs Missing record: Mystery reigns. Imagery melds with sound and texture.

Despite the link to the past, this record is of the here and now. And it's easy to imagine that if this was the first album by a new band, there would be a different level of buzz than what this band gets for album number 15. Colin Newman, Graham Lewis and Robert Grey, the three original members of Wire who are still in the band, are 61 and 63 and 64 years old now. I'm sure I'm guilty of age discrimination, or a bias toward what's new when it comes to music. But I'd love to imagine — for this one record, if nothing else — this record being treated as equal, heard with new ears.

A previous version of this story said that two original members of Wire are still in the band. There are three: Colin Newman, Graham Lewis and Robert Grey. Grey was previously known as Robert Gotobed.