Accessibility links
Mowgli Takes Convincing Lumps In The Digital World Of 'The Jungle Book' A new version of the classic Disney animated movie The Jungle Book features a live-action Mowgli in a digital jungle. 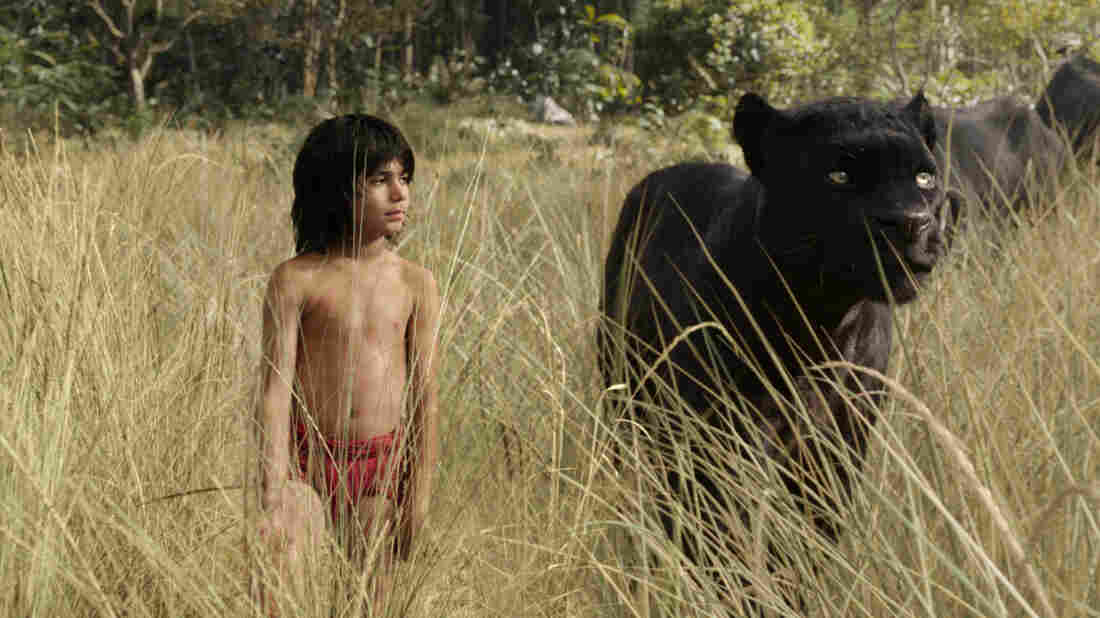 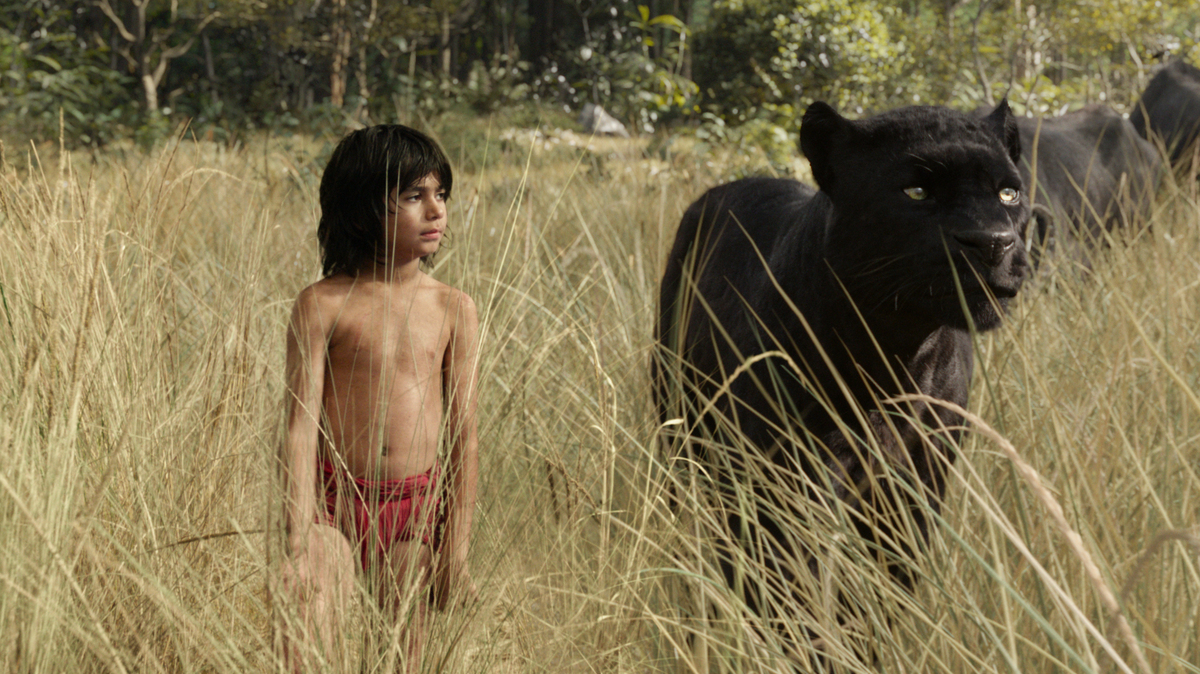 The camera pulls back from an old-looking, animated incarnation of Disney's Cinderella castle logo directly into a very real-looking 3-D jungle at the outset of The Jungle Book. Critters, plants waterfalls, a teeming environment through which is plunging one little flesh-and-blood boy, Mowgli, running for his life, scampering up tree-trunks, swinging from vines to get away — the camera careening after him, also trying to get away — from a huge black panther.

When the boy loses his footing, the panther leaps...and then lectures the lad that if he doesn't get better at running with the pack, he's going to end up as someone's dinner. Bagheera, voiced by Ben Kingsley but persuasively furred, clawed, and ferocious, is Mowgli's guardian. He found the kid as an infant and got a wolf-pack to raise him.

Now, though, the little man-cub is big enough that he's attracting attention — negative attention — from tiger Shere Khan voiced by Idris Elba, who vows to slaughter wolves en masse if the lad's not handed over.

To spare the pack, Mowgli sets off on his own...encountering assorted dangers: Scarlett Johansson's seductive python; Christopher Walken's hulking orangutan (who's introduced in a winking nod to Apocalypse Now). Also Bill Murray's ferocious-looking softie of a bear, Baloo, who, being afraid of heights, enlists Mowgli's aid in harvesting honey from cliffside bees.

Jokes aside, there's more at stake here than in the 1967 cartoon version of Rudyard Kipling's Mowgli stories, the last animated feature film that Walt Disney personally supervised. The tone and look are different, of course, and the episodic structure has been massaged a bit to give it the feel of an adventure blockbuster. But there's also a darker throughline: Mowgli losing father figures right and left, not to mention nearly getting pummeled by a mudslide, trampled in a stampede, stung, bitten, burned and manhandled.

All of which is to say that most of the real world challenges that Leo DiCaprio faced in The Revenant, 10-year-old Neel Sethi faces plenty persuasively in The Jungle Book's digitized world. Though he was mostly acting in a blue-screen environment, it's a world that Iron Man director Jon Favreau had me so fully accepting as real, that about an hour in, when Baloo started singing, I confess it bugged me. And yes, I know: "Talking bear? No problem. Singing bear? Not realistic" is not a defensible position. Shift in tone, sounds better, but really, I'm grasping at straws.

And I'm doing so, even as I marvel at an astonishing visual experience, tricked up with in-jokes — water splashing on the camera lens, when there isn't actually water or a lens because everything but the boy was created digitally. In fact, the most genuinely astonishing thing on screen may just be the last line in the credits. Five words: "Filmed... in Downtown... Los Angeles."