Accessibility links
#NeverTrump Efforts To Take Down Donald Trump Could Take Tips From 2011 Correspondents Dinner President Obama and comedian Seth Meyers made cracks at the real estate magnate's expense over birtherism and Trump's political credentials — mocking him relentlessly at the event. 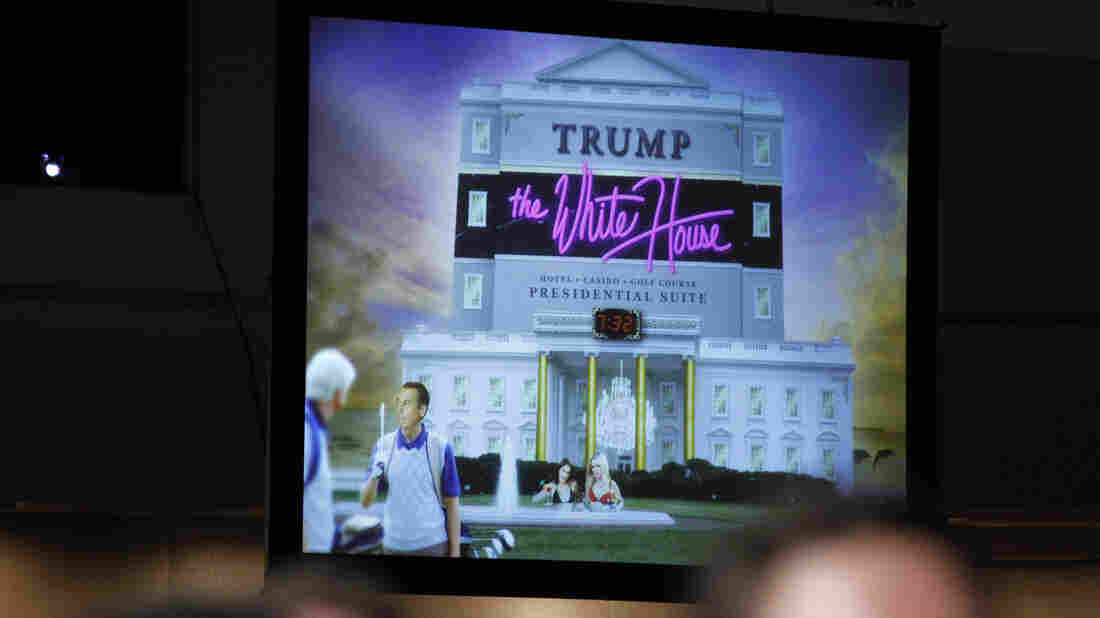 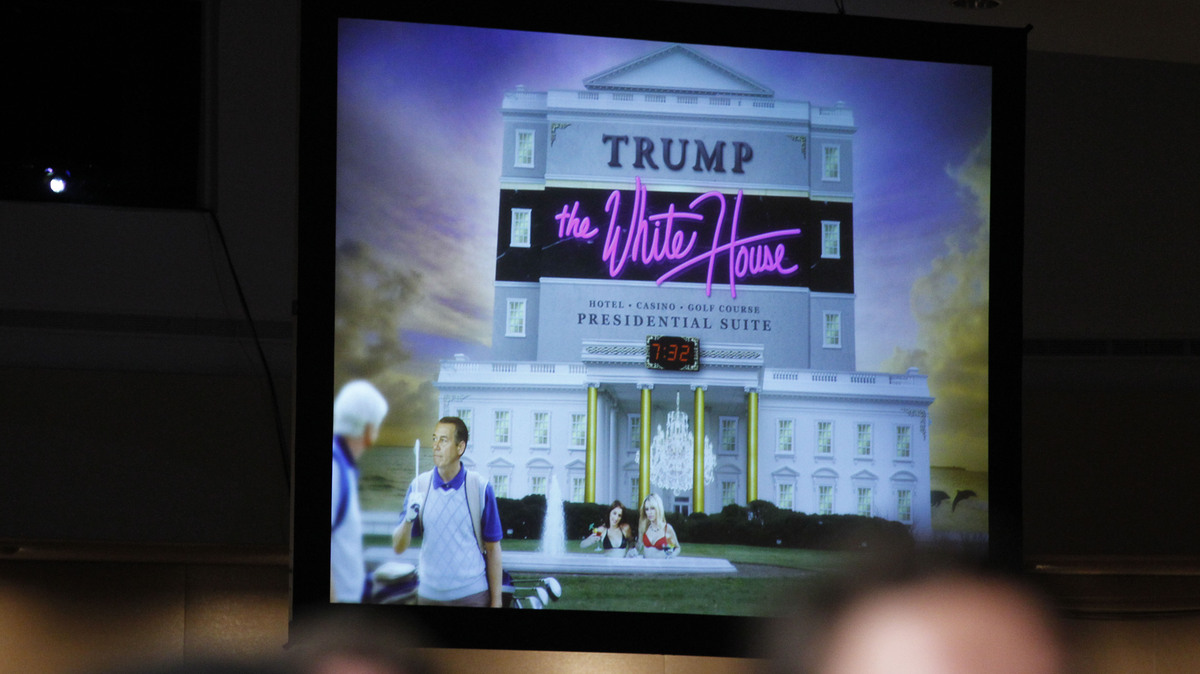 A video depicts an imagined Donald Trump presidency, as President Barack Obama delivers jokes — with Trump in the audience — at the 2011 White House Correspondents dinner.

Donald Trump has based his presidential campaign on resentment toward the establishment, and some alarmed Republicans have called for national leaders to take Trump down.

Of course, this has been tried before — on a fateful evening five years ago, when stars of politics and comedy made Donald Trump the butt of a national joke.

The setting: The cavernous Washington Hilton.

The event: The White House Correspondents dinner — "a scrum of politics, politicians and celebrities," in the words of Marcus Brauchli, formerly the top editor of The Washington Post and The Wall Street Journal.

Brauchli attended the black-tie affair that night as the Post's top editor. The paper's chief celebrity guest: Donald Trump, who had been invited by Lally Weymouth, the mother of the paper's then-publisher. Brauchli squired Trump around, introducing him to political figures, such as the chairman of the Federal Communications Commission, and former Ambassador Jon Huntsman, who was preparing his own bid for the White House.

"Trump was, I would say, in pretty high spirits on the way into the dinner," Brauchli recalled recently.

For several weeks, two teams of writers had been drafting rival sets' remarks: one for President Obama and another for comedian Seth Meyers.

Donald Trump — known as a brash real estate developer, celebrity and ritualistic televised firer — had emerged as the figurehead of the birther movement. (For those who have somehow forgotten: So-called birthers contended that Obama was born in Kenya, not Hawaii, and was thus ineligible to be president, despite overwhelming evidence to the contrary.)

"A couple of weeks prior to the dinner was when Trump decided to send his team of investigators to Hawaii and determine whether or not the president of the United States was actually born in the United States," said Jon Favreau, then Obama's chief speechwriter.

Obama finally dispatched a lawyer to retrieve his long-form birth certificate in Hawaii, releasing it with some irritation days before the dinner.

Favreau decided to convert the insult into a punchline.

Several hours' drive north, writers for Seth Meyers were casting about for comedic targets. Meyers, now host of NBC's Late Night, was to be the final speaker of the night. At the time he was anchor of Saturday Night Live's mock newscast, "Weekend Update," as well as the show's lead writer.

"Donald Trump was not in our crosshairs when we sat down three weeks out," Meyers told me. "He did us the great favor of ramping up his demands for the birth certificate as we got closer to the show."

Meyers did not realize Trump would be at the dinner.

"At the time he was sort of a bipartisan target — no one owned him. The Republican Party didn't own him at the time, the way they own him now," Meyers said at his office at Rockefeller Center. "So everyone in Washington, I think, saw him as this buffoonish character who was saying he could come in and understand how politics worked.

"And so he was a perfect target, in that the entire room was ready to hear jokes about him."

Obama started light. Now that the question of his birth was settled, Obama said, Trump would focus on resolving the issues that matter — like the faking of the Moon landing, the mysteries of Roswell, N.M., and the location of the rappers Biggie Smalls and Tupac Shakur.

"I don't care what your politics are — this is the funniest president, with the best delivery, in the history of certainly televised comedy," Meyers said.

To be clear, Meyers said this as much as a complaint as a compliment.

"What we wanted to accomplish more than anything was show people how absurd he was — how absurd his line of inquiry into the president's, you know, legitimacy was," Favreau said. They also sought, he said, to "poke fun at Trump thinking that he was qualified to possibly be president of the United States based on his very successful career as host of the Celebrity Apprentice reality show."

It's true: Trump was speaking openly of a White House bid even then.

Favreau's colleague Jon Lovett had consulted the comedian and director Judd Apatow. According to both Favreau and Apatow, Apatow pitched a bit based on Trump's television success that led Obama to bury Trump in praise.

"Seriously — just recently, in an episode of Celebrity Apprentice, at the steakhouse, the men's cooking team did not impress the judges from Omaha Steaks," the president said. "And there was a lot of blame to go around, but you, Mr. Trump, recognized that the real problem was a lack of leadership."

Trump nodded at one point — but as Meyers notes, he otherwise took it, impassively, even as Obama addressed Trump directly: "And so ultimately, you didn't blame Lil' Jon or Meatloaf — you fired Gary Busey. And these are the kind of decisions that would keep me up at night."

Obama drew roars of laughter. And then he turned to the dangers that journalists faced in the field, saluting their bravery to inform Americans of events in perilous areas.

Meyers feared Obama had used up every laugh from the room. "At a comedy club, if he passed you after he did that, you'd say, 'Hey man, you're never opening for me again!' "

He need not have worried. Meyers killed too, starting with this line: "Donald Trump has been saying he will run for president as a Republican — which is surprising, since I just assumed he was running as a joke."

"They went after him hard," said Brauchli, the former Washington Post executive editor. Trump's discomfort visibly mounted over the course of the night.

"When he walked in, he felt like he was in the crowd and of the crowd," Brauchli said. "And within an hour, he's the focus of massive ridicule from the most powerful man in the room and the celebrity guest of the night."

Brauchli says Trump and his wife, Melania, exited precisely and with alacrity.

The next morning Trump delivered his own reviews, to ABC, Politico and Fox News.

"I didn't know that I'd be virtually the sole focus, and I guess when you're leading in most of the polls that tends to happen," Trump told the hosts of the Sunday edition of Fox & Friends.

"I thought the delivery was good," Trump continued. "I thought Seth Meyers, frankly, his delivery was not good — he's a stutterer and he really was having a hard time." 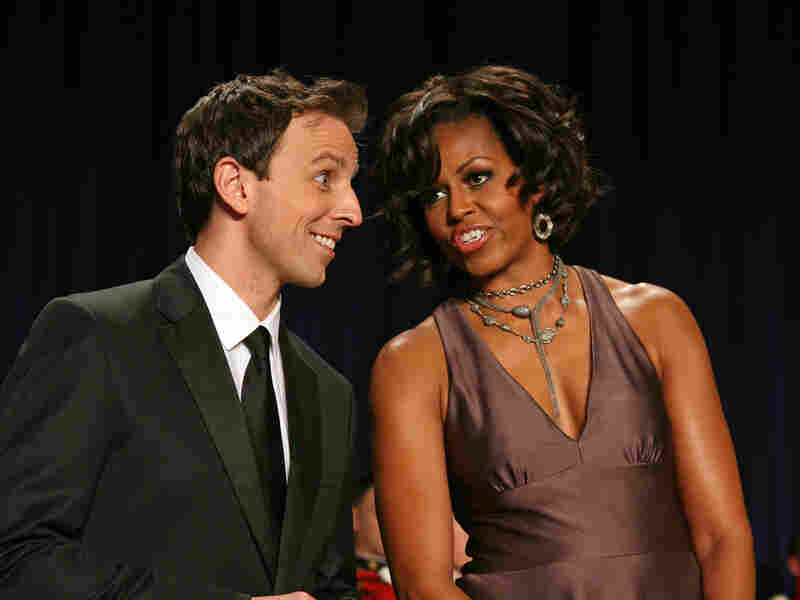 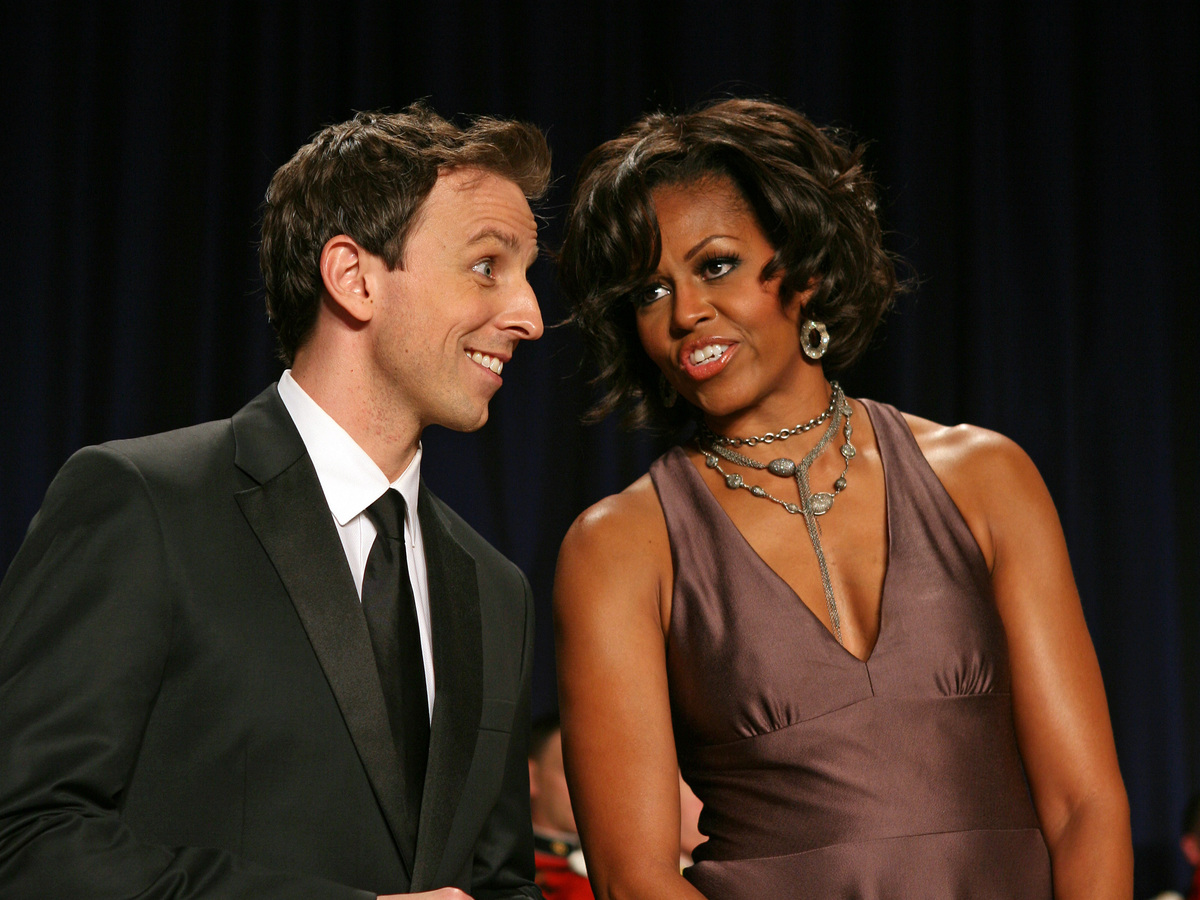 Meyers approached Trump at a charity event a few days later and thanked him for being a good sport. Meyers says Trump told him, "You went too far."

"Also, I want to point out that he hadn't been a good sport. But I was allowing him the window to embrace this revisionist history where he had been a good sport," Meyers recalled, laughing. "He really wanted no part of it."

Despite repeated and detailed requests for comment, Trump was not available for an interview for this story. Last month Trump told The New York Times that he loved the dinner and could handle criticism.

Favreau, the former White House speechwriter, said Obama had surprised his speechwriters in the days leading up to the dinner by insisting they rewrite a joke referring to Osama bin Laden in the punchline. Unbeknownst to Favreau, Obama had just secretly authorized the deployment of a special forces team to Pakistan to hunt down the al-Qaida leader.

"I've thought back on that evening, how Obama managed to finish off one enemy, but it turned out the blow he delivered to Trump was temporary," Brauchli said — "and may just have served to harden Trump's resolve to go after the elites who were then laughing at him."

"I don't think we trolled Donald Trump into running for president at that dinner," Favreau said. "I do think that part of the reason that Trump ran for president is so people would take him seriously."