Accessibility links
Book Review: 'Mary Wept Over the Feet of Jesus' By Chester Brown Chester Brown's new graphic novel is hard to categorize — a work of lay scholarship about prostitution in the Bible that's simultaneously ideosyncratic, meticulous, imaginative and heretical.

God And Sex Workers — Plus Cartoons — In 'Mary Wept'

God And Sex Workers — Plus Cartoons — In 'Mary Wept' 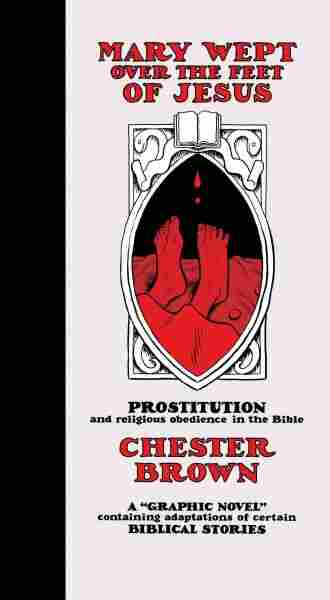 Mary Wept over the Feet of Jesus

It would be tough to size up Chester Brown's new graphic novel, Mary Wept Over the Feet of Jesus, even if it weren't about prostitution. This book of lay Biblical scholarship is simultaneously idiosyncratic, meticulous, imaginative and heretical. It's also deeply emotional, which may come as a surprise to readers of Brown's last book, Paying For It. In that work, about his own experiences hiring prostitutes, Brown came across as impassive, even robotic. He drew himself with knifelike cheekbones and pupil-less eyes and kept issuing such declarations as, "Unlike people trapped in possessive monogamy, I'm in a position to respond to my sexually related emotions."

You might expect a Biblical treatise with a 55-title bibliography to feel even more detached. But Mary Wept brims over with earnest faith and compassion. A self-described Christian who's "not at all concerned with imposing 'moral' values or religious laws on others," Brown has more in mind here than just using the Bible to justify his sex life. He also aims to prove that several of the best-known Biblical figures, from Abel to Job, "find favor with God because they oppose his will or challenge him in some way." It's a topic particularly well-suited to a lay scholar; Brown's got to establish that he's worth listening to even though he's an amateur challenging hallowed orthodoxies.

Remarkably, he does just that. In the course of 270 pages he makes compelling cases for a whole gamut of unconventional claims. Regarding prostitution, he asserts that Mary, Jesus' mother, was a prostitute, that the early Christians practiced prostitution, and that stories like the Parable of the Talents were pro-prostitute.

Equally absorbing is Brown's contention that the Bible lends itself to a "mystical," rather than legalistic, interpretation. He takes on the notoriously frustrating and oblique story of Job, saying it demonstrates "God's uninterest in human conceptions of right and wrong."

A self-described Christian who's "not at all concerned with imposing 'moral' values or religious laws on others," Brown has more in mind here than just using the Bible to justify his sex life.

"Bad men often flourish; good men often don't; your children will die; you will feel agonizing pain and, yes, all of this seems unfair," he writes. "But, if you focus on that, you're not seeing the miracle that you're in the midst of."

Brown makes these arguments in an afterword and endnotes that take up the last third of the book. In the first two thirds, he illustrates the Biblical passages in question. His style here is as economical as in Paying For It and 2006's Louis Riel, with a bare minimum of detail used to differentiate characters and establish settings. It might have been expected that he'd draw people naturalistically in order to make them more relatable. But his toylike figures emphasize the extreme strangeness of these tales.

Brown's other graphical triumph is his lettering. He hand-wrote all 76 pages of his afterword, endnotes and bibliography. Aside from the visual appeal of his tidy, unassuming print, the act of hand-lettering in this context takes on the feeling of a ritual. You can practically feel him pressing each letter of his argument into the paper. The religious nature of Mary Wept is also reflected in its design. It's a very small hardcover that's easy to flip through — delightful, when you're dealing with endnotes — and cleverly evokes a pamphlet or tract.

And yet, despite its virtues, Brown's book won't be finding its way into university libraries any time soon. The academic edifice just doesn't have a nook for works of independent scholarship, however beguiling. It's going to be up to ordinary readers to seek truth from this unconventional source. But in doing so, if Brown's thesis is correct, you'll be doing the will of God.