Accessibility links
Not My Job: NASCAR Driver Matt Kenseth Gets Quizzed On Golf Carts We're recording in Milwaukee this week, so we've invited a Wisconsin native to the show. We'll play a game called "Get a move on, pal!" 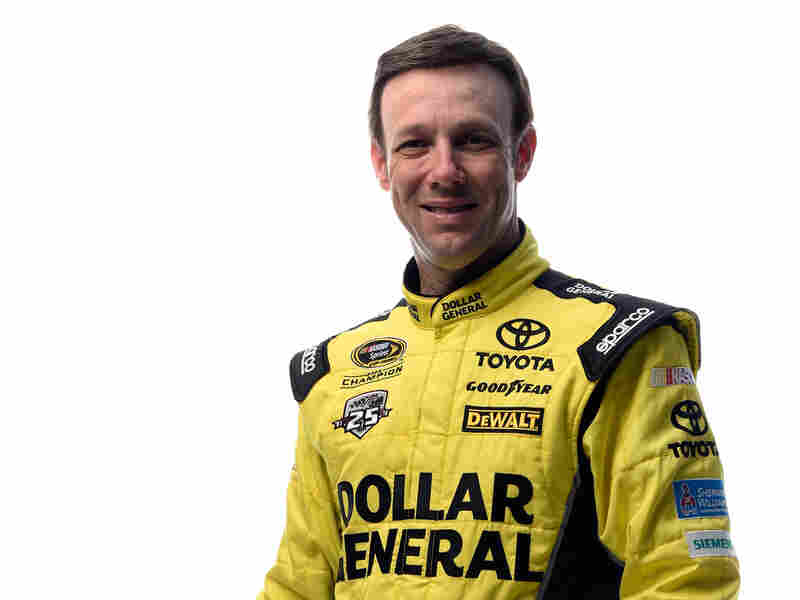 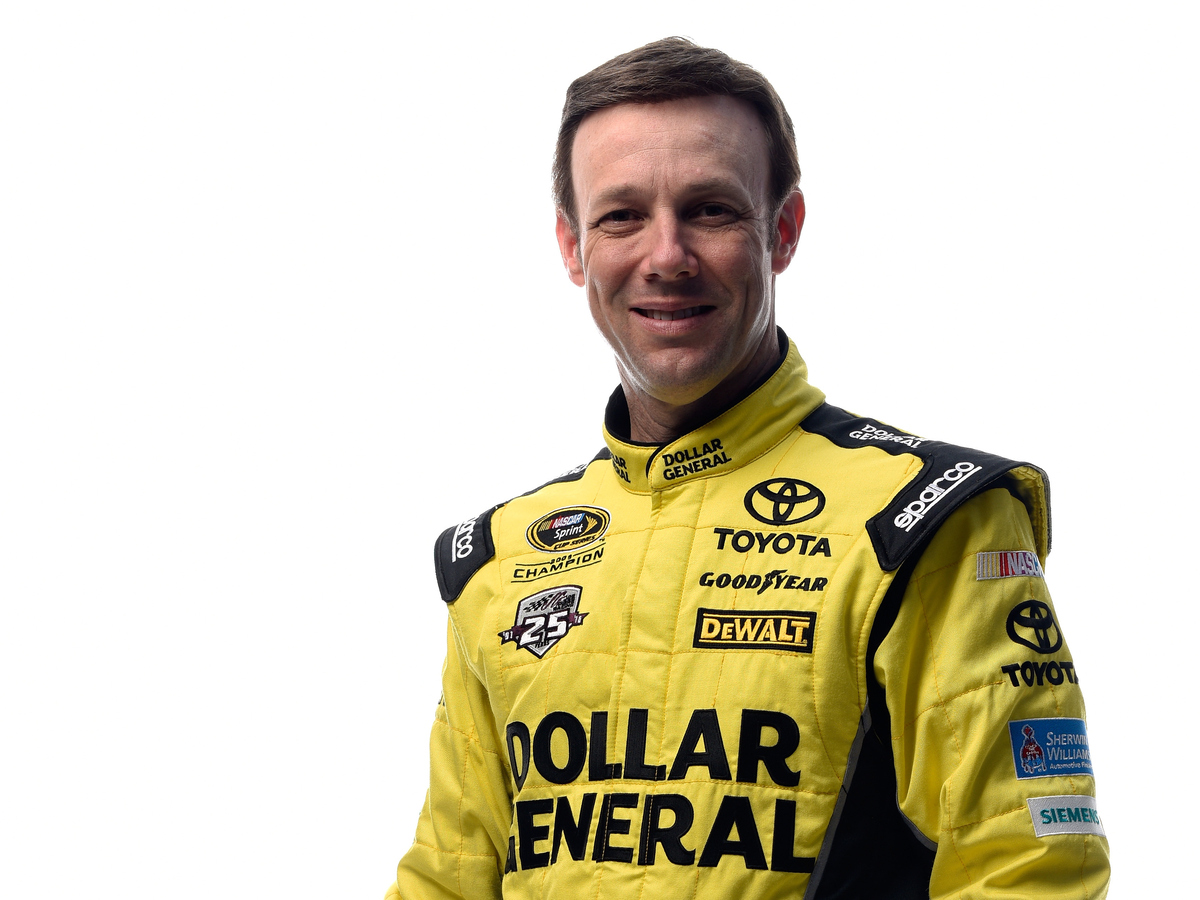 We're recording in Milwaukee this week, so we've invited champion NASCAR driver Matt Kenseth — a Wisconsin native — to the show. Since he specializes in driving things that go very, very fast, we've invited him to play a game called "Get a move on, pal!" Three questions about golf carts.

And it's now the game where we ask interesting people about uninteresting things. It's called Not My Job. So NASCAR champion driver Matt Kenseth, whose name autocorrect constantly corrects to Kenneth - was born in Cambridge, Wis., where his first job was sizing mink furs at a mink farm. He became a racer when he said to himself how fast do I have to drive to get out of here? Matt Kenseth joins us now from North Carolina. Matt Kenseth, welcome to WAIT WAIT... DON'T TELL ME.

SAGAL: Now, Matt, first up, I did not associate Wisconsin with stock-car racing. But it turns out I am wrong, right, that you grew up racing here?

SAGAL: Right. And how young were you when you knew that's what you wanted to do, to race cars?

KENSETH: (Laughter) Well, I've always been interested in racing and mechanics. And I think the thing that really opened my eyes to racing was probably the first day that I drove somebody else's car and me and my dad didn't have to pay for the tires and the pit passes...

KENSETH: I actually got paid a little bit to drive a race car. I thought that was the greatest thing ever. So once that happened once, I was like I've got to figure how to do this more.

SAGAL: Right. So now you're on the NASCAR circuit. You're a sponsored and very successful driver. You've won a bunch of championships. In fact, you won - I read this - you won the Daytona 500 in 2009 because it was cut short by rain?

KENSETH: Well, we didn't win it because it was cut short by rain.

MO ROCCA: But doesn't your car have windshield wipers?

KENSETH: No windshield wipers, and we don't have any tread on our tires, so I think it'd make a big mess.

LUKE BURBANK: That sounds dangerous. You guys should get them tread.

ROCCA: I know - I know about the fourth turn at Charlotte. I know all about it.

SAGAL: I've heard that driving a NASCAR - a race car - even though you're technically sitting still is actually one of the most physically-difficult things that athletes do. Would you agree with that?

SAGAL: Oh (laughter). I've heard stories of, like, you know, trained athletes getting into a NASCAR car, doing a few laughs with a driver driving and staggering out because their body can't take it. And you're like nah, we're just sitting there, listening to the radio? Is that...

KENSETH: (Laughter) Well, I will say it's different, you know? It takes - you know, it's really hot in the car. You're in there for a really long time. It obviously takes a lot of mental focus. But I wouldn't say that it's nearly as physically demanding as most other sports.

ROCCA: Have you ever taken a right turn?

KENSETH: As a matter of fact, I have.

SAGAL: Do you have to spin around in left-handed circles to unwind...

SAGAL: ...After a race? Is that what you're asking?

KENSETH: Yeah. I mean, - I mean, right now I'm trying to figure out if any of those questions is really serious or not.

SAGAL: Yeah, so are the listeners.

KENSETH: ...I was working out of about a month ago with my trainer over here. And, like, my left side of, like, my abs and my core is, like, twice as strong as my right side. So there is a little bit there, actually...

KENSETH: Believe it or not.

ROBERTS: What kind of driver are you when you're not working?

SAGAL: I have - I wonder if - again, about this skill thing. Let's say you were in a Prius and I was in a Porsche...

SAGAL: ...And stipulating that I don't know what I'm doing, who would win?

KENSETH: Well, since I - since Toyota is one of our biggest sponsors and you're putting me (unintelligible) I'm going to win.

SAGAL: Well, Matt Kenseth, it is a pleasure to talk to you from your home state. But we have asked you here to play game we're calling...

BILL KURTIS: Get A Move On, Pal.

SAGAL: Since you drive very fast for a living, we thought we'd ask you about vehicles that go very slowly, namely golf carts. Answer three of these questions about golf carts correctly, you'll win our prize for one of our listeners - Carl Kasell's voice on their voicemail. Bill, who is NASCAR champion Matt Kenseth playing for?

SAGAL: So you ready to play here, Matt?

KENSETH: I - not really but I'll try.

SAGAL: First question, lawbreaking in golf carts is pretty common, as you might imagine. Which of these really happened? A, a midnight golf cart drag racing club in the Villages retirement complex was broken up when a cop car easily caught up with the fleeing racers...

SAGAL: ...B, a Florida golf club member was thrown off the course for mistaking her Chrysler LeBaron convertible for a golf cart and driving it up the fairway, or C, a bank robber in LA got out with $75,000, jumped into a waiting golf cart and was arrested 400 feet later.

KENSETH: Yeah, you know, I'm going to go with B. I could see some old lady drinking too much on the golf course and getting in her car and driving down the fairway. I could totally see it.

SAGAL: It is frightening how accurate you are 'cause that's exactly what happened.

SAGAL: ...That I did not mention the drinking part, but Matt here figured that out that that had to play a role. And it did - she likes to drink, this particular golf club member and she - especially before a round of golf. And she just mistook her Chrysler for the golf cart and went tearing up the fairway. All right, two more questions. You did pretty well with that one. Golf carts are getting passe. Hip golfers are using new alternatives to the golf cart, such as which of these? A, the golf horse cart, which is environmentally friendly and it fertilizers the grass...

SAGAL: ...B, golf drones, which use four motorized drones to carry your clubs as you walk, or C, the GolfBoard, a motorized surfboard that lets you carve the hills and fairways as you play?

KENSETH: Oh, it's got to be the surfboard.

SAGAL: Yes, it is, Matt. You're right again.

SAGAL: The only - it is the GolfBoard - it's the only way science has yet found to make golfers look even sillier.

KENSETH: So do you guys want me to get this last one wrong so you don't actually have to call that guy's voicemail?

SAGAL: You are a master of race strategy. It's amazing.

BURBANK: I find it unsettling, Matt, how quickly you'll throw a competition. It's a little...

SAGAL: Oh, they are punishing me. We're going to play this out. Here we go...

SAGAL: It turns out, golf carts - not just for playing golf, as in which of these instances? A, certain Saudi billionaires use them to travel the interior hallways of their mansions, B, the Indian army once bought 22 of them to use as, quote, "silent reconnaissance vehicles..."

SAGAL: ...Or C, Donald Trump has a small golf cart done up to look like a car so he can sit in it and it makes his hands look bigger.

KENSETH: You know, as much as I'd like to go with C, we're going to have to say A.

SAGAL: You're going to go with A, the Saudi billionaires?

KENSETH: Yeah, they've got to be cruising down their halls.

SAGAL: They might be, but as far as we know we made that up. It was actually the Indian army - silent...

KENSETH: I knew that. I just didn't want to have him make that phone call that...

SAGAL: Bill, how did - how did Matt Kenseth do on our show?

SAGAL: It's true. You won anyway.

SAGAL: Matt Kenseth is one of NASCAR's biggest stars. You can see him racing the number 20 car at the Food City 500 this Sunday. Matt Kenseth, thank you so much for joining us. It was lots of fun.

KENSETH: Thank you for having me.

(SOUNDBITE OF SONG, "THE RACE IS ON")

GEORGE JONES: (Singing) Now the race is on and here comes pride up the back stretch. Heartaches are going to the inside. My tears are holding back. They're trying not to fall. My hearts out of the running. True love's scratched for another's sake. The race is on and it looks like heartaches, and the winner loses all.

SAGAL: In just a minute, Bill shows the shorties some love in the Listener Limerick Challenge. Call 1-888-WAIT-WAIT to join us on the air. We'll be back in a minute with more WAIT WAIT... DON'T TELL ME from NPR.