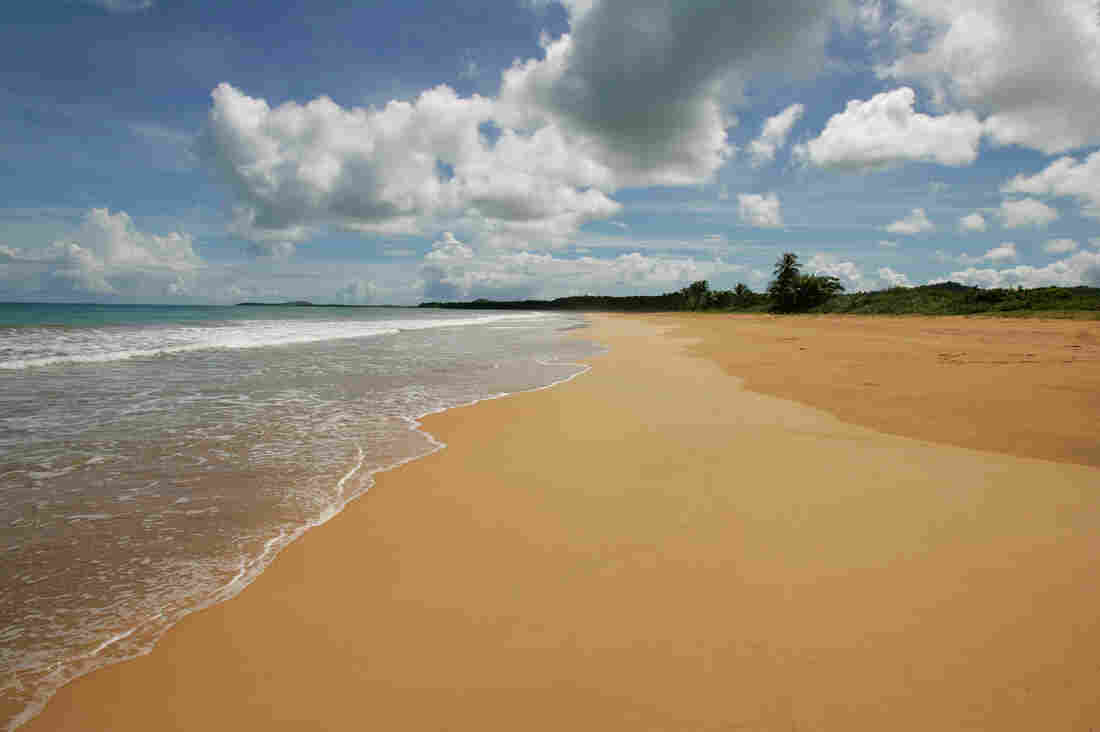 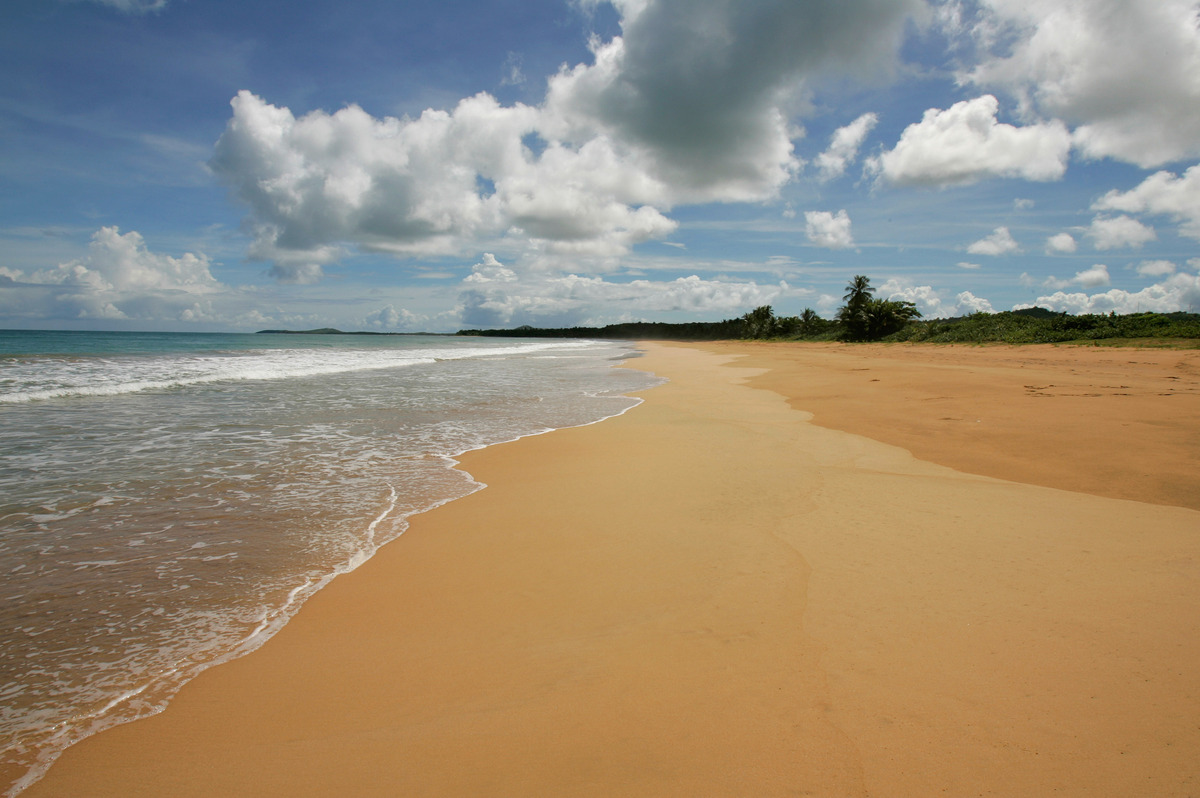 A view of the beach known as "La Selva," part of the Northeast Ecological Corridor reserve, in Luquillo, Puerto Rico.

The area he's fought to protect is called the Northeast Ecological Corridor, a 3,000 acre reserve with forests, lagoons and unspoiled beaches. It's prized by visitors from around the world, including endangered leatherback sea turtles, who swim thousands of miles to get there. The turtles leave deep tracks in the sand from the water to the nesting sites and can leave more than 100 eggs per nest. It's one of the most important nesting areas for leatherback sea turtles in the Caribbean.

"The tracks they look more or less like as if a bulldozer has moved onto the beach," Rivera says. "So it's quite easy to detect where the nests are." 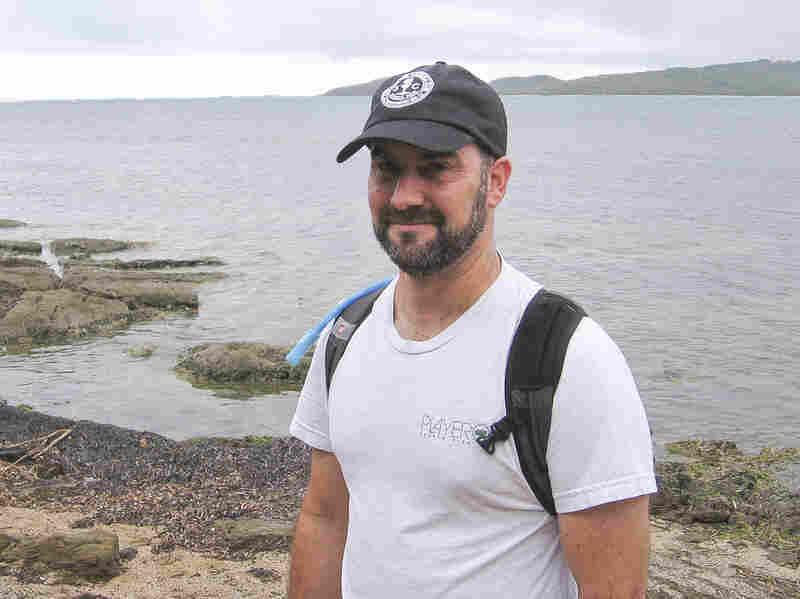 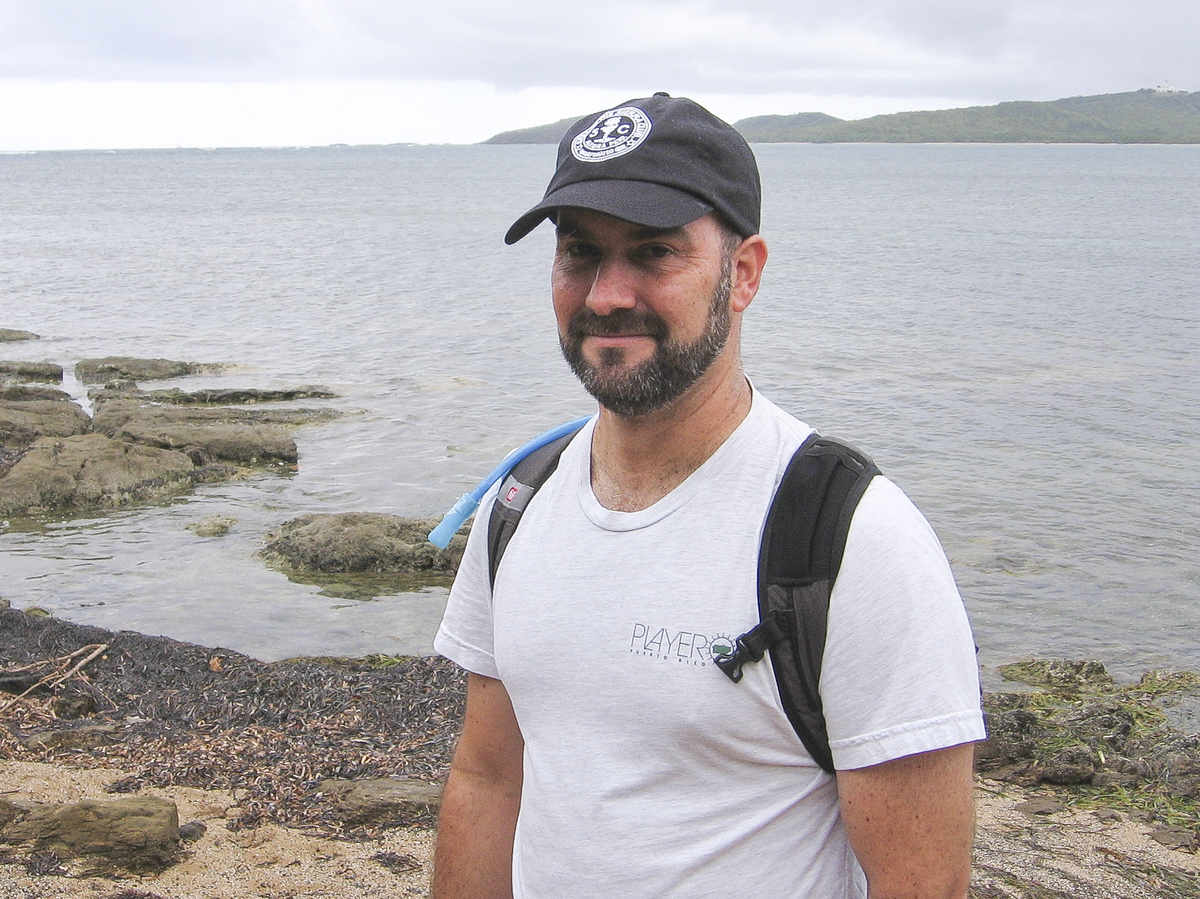 Three years ago, Puerto Rico designated the area south of Luquillo as the Northeast Ecological Corridor. It stretches from the foothills of El Yunque, a tropical rainforest, to mangroves and beaches on the coast. For environmental groups, it was a victory that came after decades of work.

Scientists have documented nearly 900 species of plants and animals in the ecologically diverse area. There's also a lagoon that part of the year is bioluminescent, glowing from a light produced by plankton.

Rivera's career as an environmental activist got started early, as a boy growing up on his family's coconut palm plantation. When he was eight, he saw the land cleared to make way for a sewage treatment plant. Acres of his family's palm trees were cut down and it made a big impression.

"I remember at that specific time a conscious decision that when I was going to be an adult I was to work on something that had to do with protecting the environment," Rivera says.

In 1999, he was working as an environmental scientist for the EPA when he heard about two big resorts planned in the coastal area near where he used to surf in the 80s. He began working with others to challenge the projects. He and his allies made the case that the resorts would damage the ecosystem, limit public access to the beaches and siphon precious water away from neighboring communities. Groups from the nearby towns of Fajardo and Luquillo became important members of the coalition.

Rivera says people in the area didn't buy claims the new projects would be a boon to the local economy because of their past experience with other resorts. "Normally what you see, they want to keep their guests in the hotel as much as possible," he says. "You don't see that economic benefit trickling down to the local communities."

As public support for preserving the area grew, in 2007, Puerto Rico's governor signed an executive order protecting the Northeast Ecological Corridor from development. But it was a short-lived victory. Two years later, a new governor repealed the designation and said the resort projects could go forward. That action sparked a huge public outcry.

It became a campaign issue, and in 2013, the new governor, Alejandro Garcia Padilla, signed a bill preserving the Northeast Ecological Corridor at an annual festival celebrating leatherback turtles in the town of Luquillo. For Rivera and many other individuals and groups, the designation was a major victory. But it came as Puerto Rico was tumbling into a financial and economic crisis that has left the government more than $70 billion in debt and unable to pay its bills.

"The reality of Puerto Rico right now, it's rather difficult," says Carmen Guerrero Perez, head of Puerto Rico's Department of Natural and Environmental Resources. Before taking the job, Guerrero was an activist who worked with Rivera to protect the Northeast Ecological Corridor. Now, she has the difficult task of carrying through with the project at a time when the government is broke.

One of the biggest challenges, she says, is finding money to buy the land. "The whole corridor, it's not under public domain as of yet," she says. "Almost 60 percent of the lands are part of the government. The others still need to be acquired."

Rivera was stunned when he learned he'd been selected for the Goldman prize along with the recognition and $175,000 award it carries. But he says there's still much to do. Environmental groups will continue to push the government to acquire the remaining land in the Northeast Ecological Corridor. And he says they'll closely monitor any nearby development.

There are few roads in the Northeast Ecological Corridor's 3,000 acres, mostly trails. With time and money, the island's government hopes to improve access and services for visitors. But for some, the inaccessibility and remote location is part of the appeal.

On the beach, Wes Englebreth and his family from North Carolina swim after hiking here to get away from people and crowded resorts. "This is a great stretch of beach," Englebreth says. "I hope it stays the same." Largely because of the work of Luis Jorge Rivera, this part of Puerto Rico's coastline will remain much as it was when Columbus landed on the island more than 500 years ago.