Accessibility links
Trade Matters In 2016; This May Help You Understand Why Candidates vying for president are talking a lot about trade. But trade is not a subject easily summed up in slogans. Here are resources to help you study up on trade and make your own decisions. 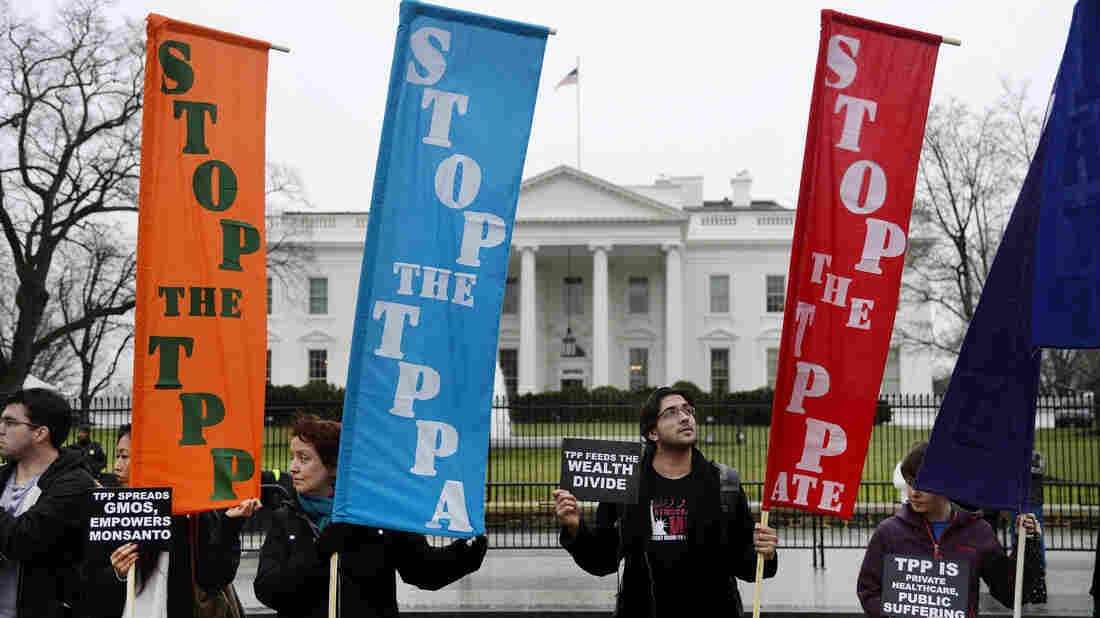 Activists hold a rally to protest the Trans-Pacific Partnership trade agreement in front of the White House on Feb. 3. Trade has become a key issue in the U.S. presidential campaign. Olivier Douliery/Getty Images hide caption 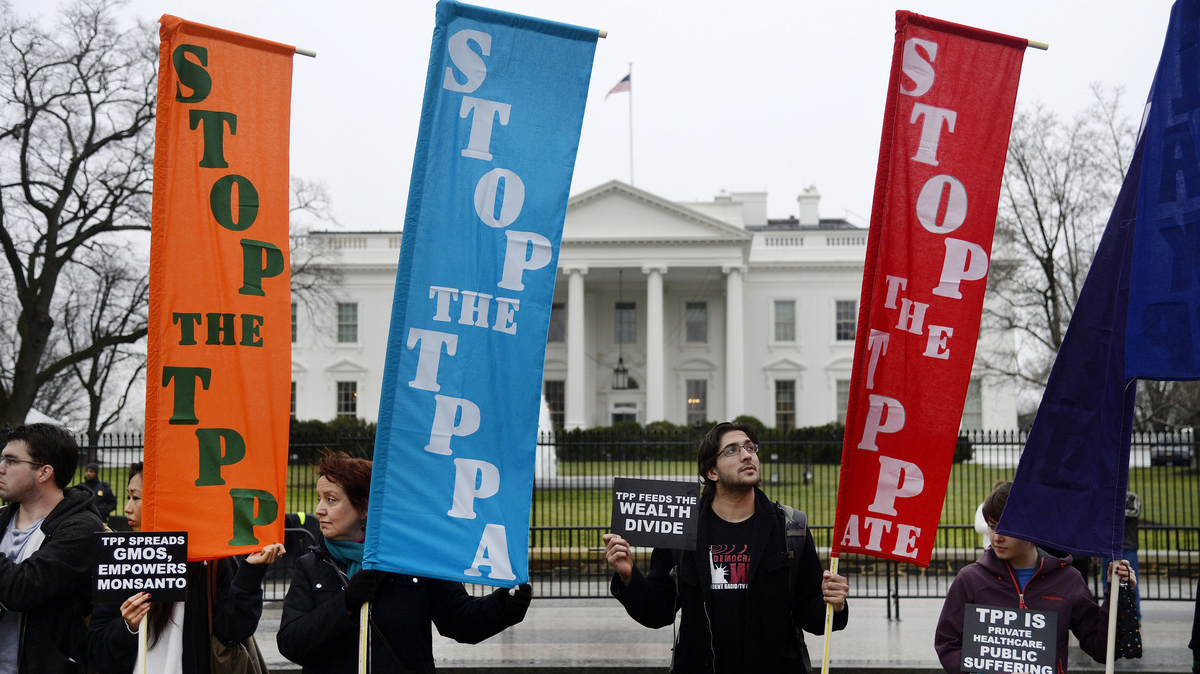 Activists hold a rally to protest the Trans-Pacific Partnership trade agreement in front of the White House on Feb. 3. Trade has become a key issue in the U.S. presidential campaign.

This week, NPR and some member stations will be talking about trade on the campaign trail and in communities around the country.

In this presidential election cycle, many Americans are casting votes based on their feelings about past trade deals, such as the North American Free Trade Agreement, and proposed deals, especially the Trans-Pacific Partnership.

But for lots of us, understanding trade deals isn't easy because international commerce creates a complex web of winners and losers — all stretched over a nearly $19 trillion U.S. economy with 323 million people. With an issue so big, how can a voter reach good decisions about candidate positions?

The single most important idea to remember is that in such a large economy, well, it's complicated. Consider this example:

In February, Carrier Corp. announced it would shut down some manufacturing operations in Indiana and move jobs to Mexico. The U.S. workers are angry, as of course they would be: Their lives are being turned upside down by a cold, corporate decision. How can there be two sides to that story? Carrier provides a slam-dunk example that NAFTA is bad for Americans, right?

But remember that Carrier is best known for making air conditioners. As recently as 1993, about a third of U.S. homes had no air conditioning. Now, only about 1 in 10 lacks air conditioning. The change largely reflects the plunge in AC prices, thanks to lower production costs. Even a retiree with limited income may be able to afford a foreign-made room air conditioner for as little as $112 at Wal-Mart.

Heat can be deadly for the elderly. Does the pain felt by a laid-off Carrier worker cancel out the relief felt by an 80-year-old Mississippian who finally can afford an air-conditioned bedroom?

What Candidates Are Saying About Trade

What Americans Think About Trade

Polls generally have reflected bipartisan support for trade over many years. In 2000, Gallup found that most respondents said increasing trade with China would help. And such support held up until the recession, when, as a December 2008 poll showed, Americans became more skeptical about trade.

In 2010, as the Tea Party rose up, many anti-establishment Republicans started turning against trade. Business-oriented Republicans (think: Chamber of Commerce) were still very much in favor of trade, but the split with older, blue-collar conservatives was widening.

Despite the recession-related dip and Tea Party backlash, trade bounced back in popularity by 2013 and 2014. Clear majorities of Americans said trade was more of an opportunity than a threat to them. In 2015, Pew found Americans continued to support trade in general — and even TPP specifically.

In January 2016, a Pew poll showed that "global trade" was not a hot-button issue, at least not when compared with much bigger concerns about economic growth, terrorism and education.

However, the most recent Pew polling shows anti-trade sentiments have now surged among Republicans (with 40 percent calling free trade a good thing vs. 52 percent seeing it as a bad thing). Those who support candidate Donald Trump are especially anti-trade (67 percent said it was a bad thing vs. 27 percent a good thing). Even though Democratic candidates Hillary Clinton and Bernie Sanders have said they oppose the TPP, most Democrats support trade (60 percent good thing vs. 30 percent bad thing).

Overall, 51 percent of Americans say such trade agreements have been a good thing for this country, while 39 percent believe they've been a bad thing, according to Pew.

What Economists Think About Trade In General

A 2012 survey of top economists showed 85 percent say the benefits of free trade are "much larger than any effects on employment." Only 5 percent were uncertain. But critics point to data showing trade puts downward pressure on low-skilled factory wages and jobs. They also say the deals have done far too little to protect workers' rights and the environment.

What Economists Say About Trade With Mexico

On NAFTA's 20th anniversary in 2014, economists re-examined the fallout and concluded it was largely a wash — with the U.S. losing some and gaining some. After reviewing that NAFTA research, the Dallas Federal Reserve Bank said: "The general consensus in the literature is that NAFTA has not had significant effects on aggregate outcomes in U.S. labor markets."

In its NAFTA-impact report, the Congressional Research Service also concluded: "NAFTA did not cause the huge job losses feared by the critics or the large economic gains predicted by supporters. The net overall effect of NAFTA on the U.S. economy appears to have been relatively modest."

What Economists Say About Trade With China

A recent important study showed that Chinese goods hurt low-skilled Americans. China's immense workforce helps create a lot of wealth in the U.S. (e.g., Apple grew wildly by using China as its manufacturing backshop) but it "tends to make low-skilled workers in the U.S. worse off — not just temporarily, but on a sustained basis." Economists also say that low-cost imports from China hold down prices for U.S. consumers.

What Some Studies Say

What Moody's Says About Trump Proposals

Trump calls for a 45 percent tax on all Chinese imports, and a 35 percent tariff on all goods imported from Mexico.

At the request of the Washington Post, Moody's Analytics recently modeled Trump's trade proposals for Mexico and China. It showed that if Congress were to approve such changes, China and Mexico would fall into recession — and about 4 million U.S. workers would lose their jobs, and another 3 million jobs that otherwise would have been created will be lost.

The U.S. economy would end up 4.6 percent smaller by 2019 than it otherwise would have been, and unemployment would rise to 9.5 percent. U.S. unemployment currently stands at 5 percent.

Chinese imports did hurt a lot of U.S. workers, but most of that may now be in the rearview mirror. That's because so many factory workers already have been replaced, either by low-wage competitors in other countries, or by technology, just as farm laborers were replaced by tractors a century ago. Because of automation, U.S. manufacturers employ less than 9 percent of the U.S. workforce but generate more than 12 percent of GDP.

As factory jobs continue to melt away, new trade deals, such as the TPP, will focus on non-manufacturing areas — such as intellectual property, pharmaceuticals, agricultural products and services, etc.