Accessibility links
In Close Race, 'Unprecedented' Push For Asian-American Voters Comes To N.Y. Asian-Americans are among the least likely to vote. But with the presidential nominations still up for grabs, campaigns are courting one of the largest Asian communities in the U.S. — New Yorkers. 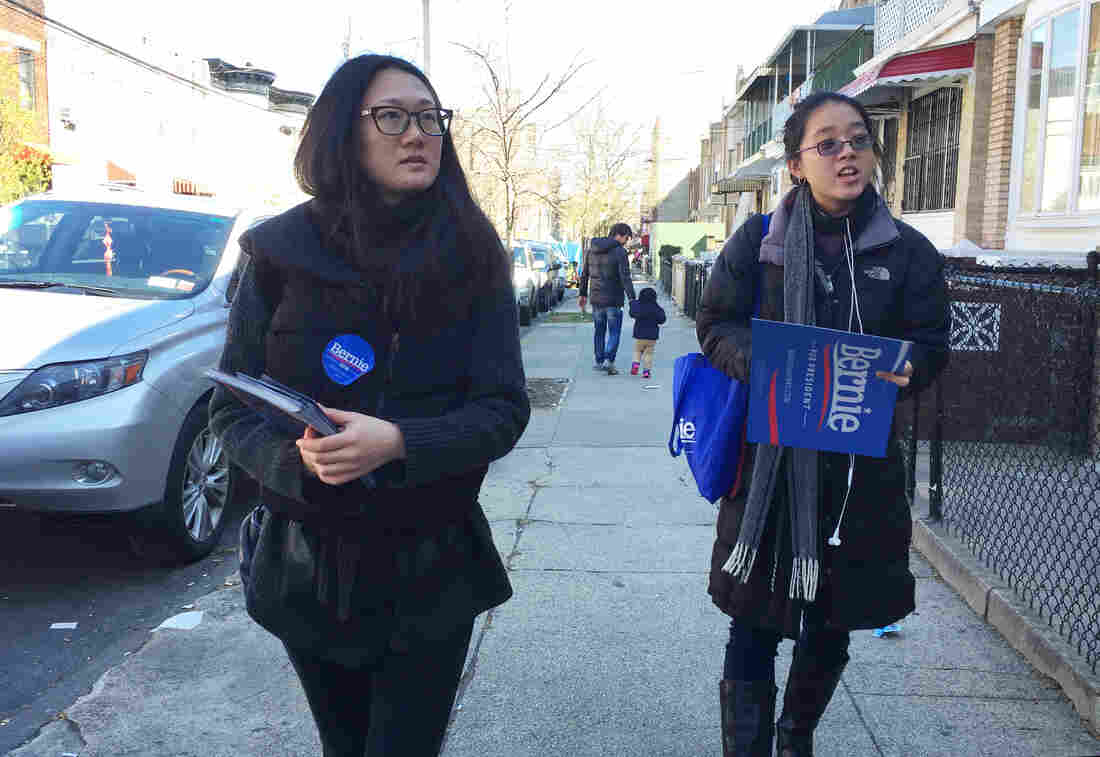 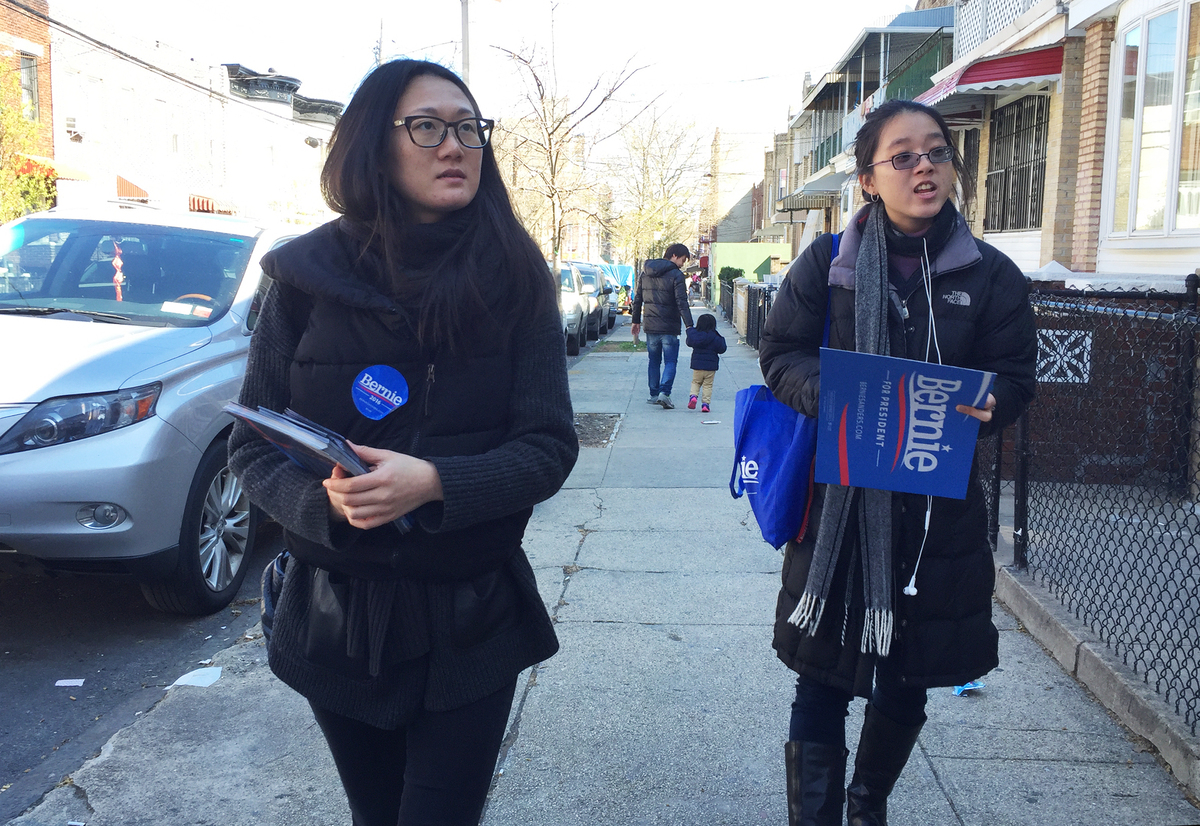 The next presidential primary battle has arrived in a state with one of the country's largest Asian populations.

A bulk of New York's more than 903,000 eligible Asian-American voters lives in New York City, where 24-year-old Brenda Nguyen has been going door to door for the Bernie Sanders campaign in Sunset Park, a Brooklyn neighborhood with a growing Chinese-American community.

Nguyen can't vote herself on Tuesday. Like two of Donald Trump's children, she missed the Oct. 9 deadline to update her voter registration and enroll with a party before New York's closed primary. But she says she's still talking up the primary in her neighborhood with as many voters as she can — everyone except her father.

"It's a very sad moment when you realize your dad is going to vote for Donald Trump," said Nguyen, whose father is a former refugee from Vietnam — and technically can't vote in the Republican primary, because he, too, didn't register with the party in time.

As for other Asian-American voters, Nguyen said she hadn't gotten very far with many of them either.

"They're like, 'Oh, I'm not going to vote.' I'm like, 'But why?'" she said with a long sigh, gesturing to a nearby polling site. "It's, like, right there. You have no reason not to just stop in, cast your vote and get out."

'Can't Sit At Home And Not Participate'

Getting Asian-Americans to the polls is a challenge not only in New York but also around the country. The fastest growing racial group in the U.S. is also among the least likely to vote.

"We just can't sit at home and not participate," said Moumita Ahmed, 26, another volunteer for the Sanders campaign.

She recently worked at a phone bank in Jamaica, Queens, where volunteers targeted Muslim voters with calls in Bengali and English. 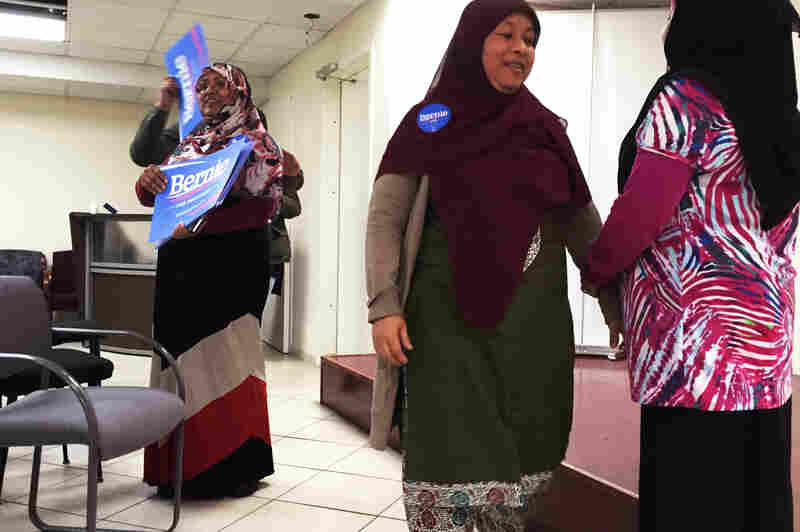 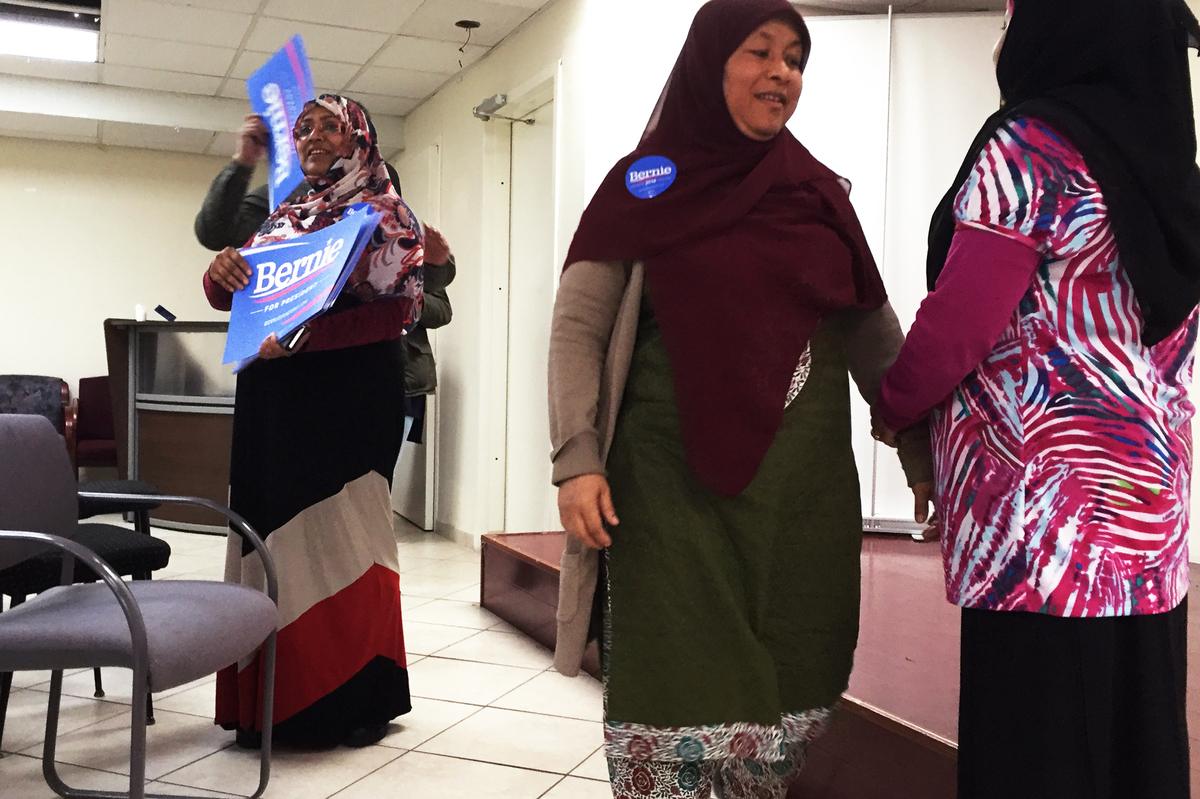 Hoshneara Begum (left) and other volunteers with the Bangladeshi American Advocacy Group held a phone bank for the Bernie Sanders campaign in Jamaica, N.Y.

"I have to make sure I let them know that this election is important, that it is really crucial that they come out," she said. "We have a front-runner who's talking about banning Muslims."

That may drive more Asian-Americans to vote. But Jerry Vattamala, who runs the country's largest exit poll of Asian-American voters for the Asian-American Legal Defense and Education Fund, said they'll need to clear a major hurdle in New York, where only registered party members can vote in the closed primary.

"Chinese-Americans, almost half in New York, are not registered in any party," he explained. "They're basically shut out from the primary process."

So are many other ethnic groups. Although the Asian-American vote has been shifting toward Democrats, 51 percent of Asian-Americans choose to not identify as Democrat or Republican, according to a 2012 national survey.

Vattamala said many Asian-American voters don't feel bound to a political party. "They tend to look more at the issues of a specific race and where candidates and parties fall on those issues," he added.

Newly registered voters may not want to commit to a party immediately. "It's a learning process for our first-, second-generational people," said Kamal Bhuiyan, chairman of the Bangladeshi American Advocacy Group in New York City.

Still, this election season has not been your average presidential race: Democrats and the Republicans are heading into the New York primary without presumptive nominees.

"It's going to be close, and I think the candidates know that. That's why they have this sort of unprecedented outreach to communities like the Asian-American community," said Vattamala, who added that the ethnic diversity of New York's voters makes the state an ideal testing ground for ways to reach Asian-American voters elsewhere in the U.S.

Another one of New York City's growing Chinatowns in Flushing, Queens, got a taste of that recently during a Hillary Clinton campaign rally. It was held at a Chinese banquet hall inside a mall with a South Korean chain bakery and a food court serving dim sum, ramen and bubble tea. Former figure skater Michelle Kwan, a daughter of immigrants from Hong Kong, played host. 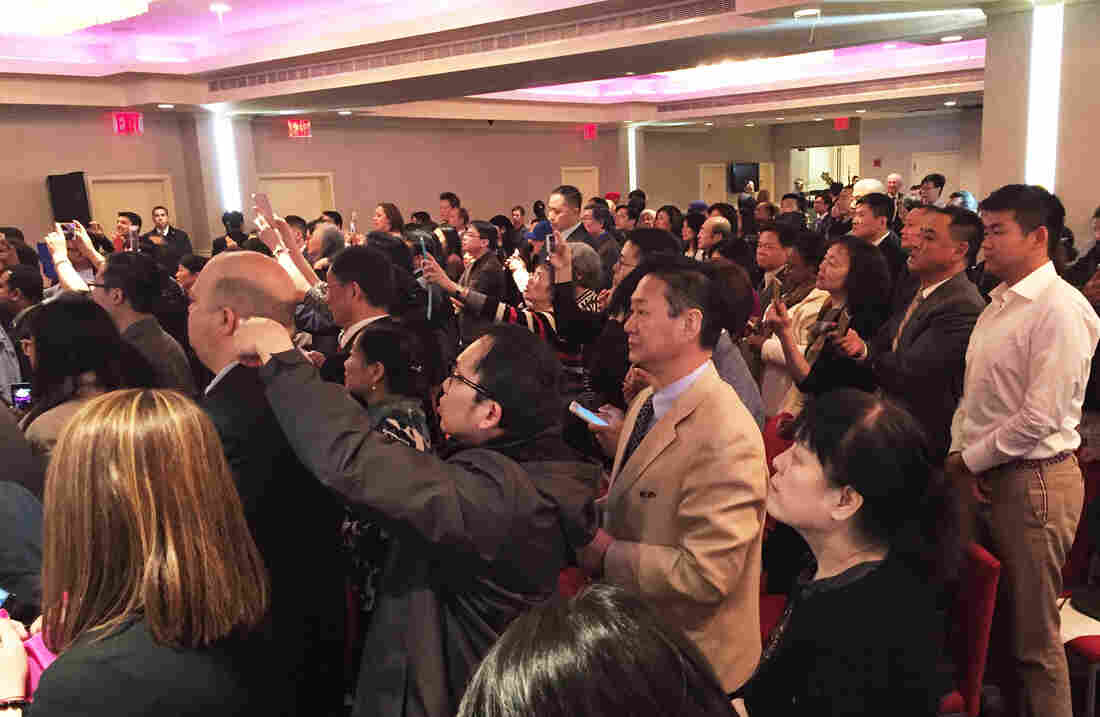 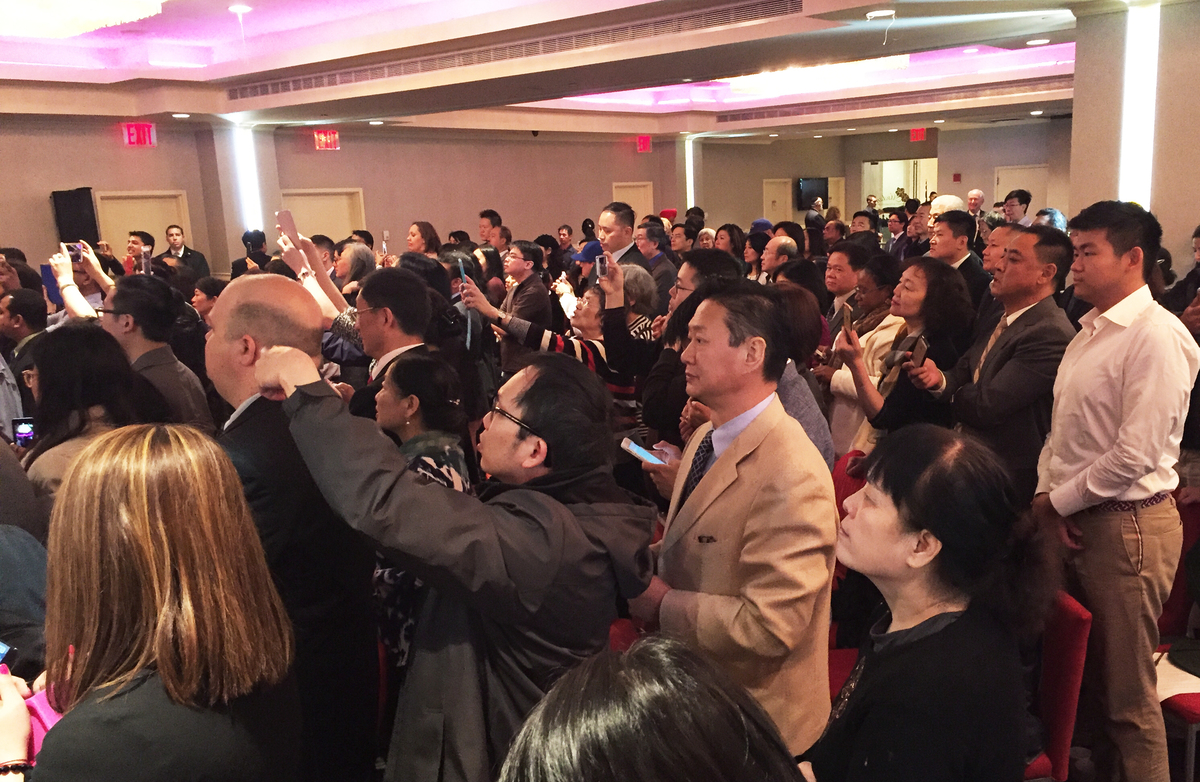 Attendees of a Hillary Clinton campaign rally raise their smartphones to take photos of former President Bill Clinton inside a Chinese banquet hall in Flushing, N.Y.

"Your community has been great for America. It's been a blessing of hard work and family values and lifting up," said Clinton before addressing the backlog of family visa applications by relatives waiting to be reunited with their families in the U.S.

His audience ranged from native English speakers with law degrees to retired, Cantonese-speaking garment workers — most of whom pledged to Hillary Clinton. Some still-undecided voters stood along the fringes of the room.

How Asian-American Voters Went From Republican To Democratic

For Gong, who said he's voting for Clinton, it was a hard choice.

But that was not the case for Catherine Xie, 22, an MBA student from Long Island. "It was so easy, because he just makes sense to me," said the Sanders supporter, as she waited outside the banquet hall after the event.

So far, she's the only one "feeling the Bern" in her family. She is disappointed that her parents have been focusing more on news from China than on the U.S. presidential race.

"We're living here," she said, "so we should be more focused on the politics here" — where campaigns are trying to draw in more Asian-American voters like her.