Accessibility links
Supreme Court Weighs Obama's Executive Action On Immigration Twenty-six states are challenging the action, which would grant temporary, quasi-legal status and work permits to as many as 4 million parents who entered the U.S. illegally before 2010. 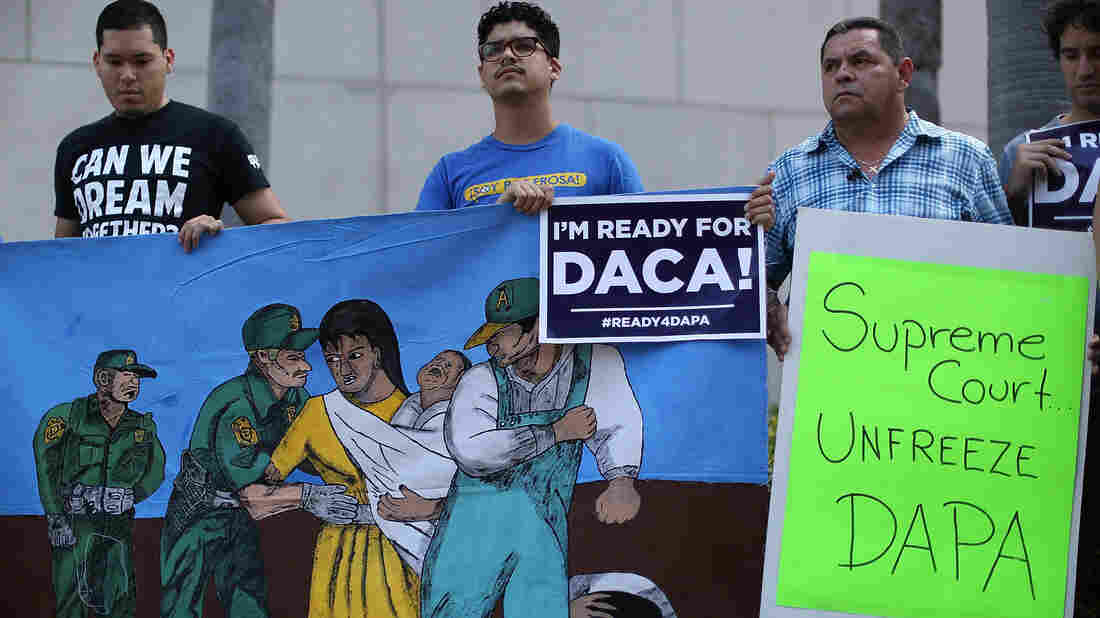 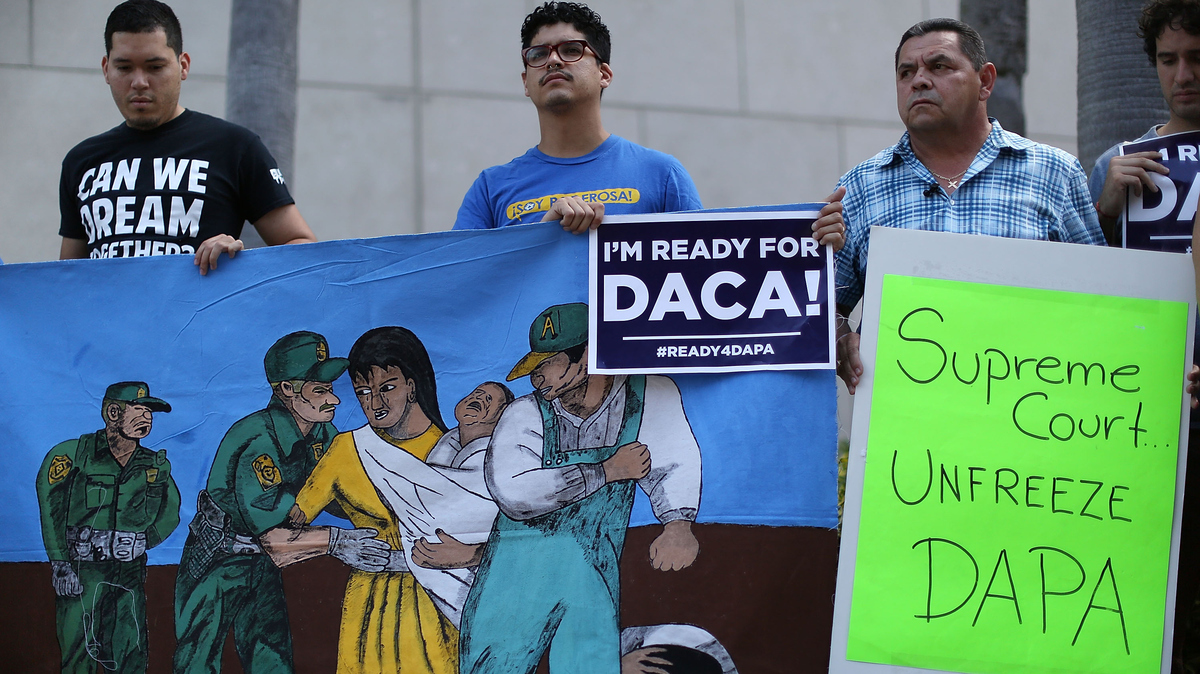 Immigration activists rally in Miami ahead of the Supreme Court hearing arguments on President Obama's executive actions on immigration Monday.

The fate of one of President Obama's controversial executive actions on immigration goes before the Supreme Court on Monday. The action would grant temporary, quasi-legal status and work permits to as many as 4 million parents who entered the U.S. illegally prior to 2010. The president's order applies only to parents of children who are U.S. citizens or legal permanent residents.

Perla is one of the millions of parents who would benefit from the president's action. She and her husband, both college graduates, came to the U.S. to study. She says they routinely returned to Mexico to renew their visas, but became afraid to return home to an area torn apart by drug cartels. So they stayed here illegally. She and Fight for Families, the advocacy organization she works with, asked that NPR not use her full name.

Now they have two children, ages 3 and 5, both American citizens. Perla and her husband do not apply for jobs they are trained to do — she in industrial engineering, he in business management. They support their children by working, illegally, in restaurants.

Perla | #FightForFamilies from Fight For Families on Vimeo.

"They are why we're here," Perla said of her children, "why we are who we are, why we try to do things right, and we'll keep doing it as long as God permits."

"But until that happens," he said, "there are actions I have the legal authority to take as president." He maintained that these are "the same kinds of actions taken by Democratic and Republican presidents before me — that will help make our immigration system more fair and more just."

Obama said that his administration had focused its deportation efforts on criminals, gang members, security threats, or as he put it, "felons, not families." It is "simply unrealistic," he said, to suggest that any administration could track down, round up and deport all of the 11 million people who live in this country illegally.

Republicans blasted the president's action as "lawless," and a coalition of 26 states, led by Texas, challenged the executive action in court, contending that the president had exceeded his authority. Last year a federal judge blocked implementation of the program on narrow technical grounds, and a federal appeals court panel, by a 2-1 vote, subsequently blocked it on broader grounds.

The case is now before the Supreme Court — a court that has repeatedly given the executive branch of government "broad discretion" over immigration policy, including how the law is to be enforced as well as who should be arrested and deported.

Three years ago in a case from Arizona, the court, by a 5-3 vote, dealt a major defeat to conservative states that tried to crack down on immigrants in the country illegally by enacting state laws that allowed police to stop and arrest people who could not show that they were citizens or legal permanent residents.

In Monday's case, the question is not whether the states have any immigration enforcement power; it is whether the president has the power to temporarily shield the undocumented parents of American citizen children, and give them temporary work permits so that they can support their families for the time being.

It is not the first time a president has done something like this. For a half-century, presidents of both parties have issued similar actions. But no executive action has had the potential to give temporary legal status to as many people. President George H.W. Bush's order had the potential for shielding 1.5 million immigrants in the country illegally, though fewer actually sought protection. President Obama's order has the potential to shield some 4 million.

Before the Supreme Court on Monday, Texas Solicitor General Scott Keller will tell the justices that this challenge is not about the administration's decision to forego deportation for whole classes of people.

Those benefits — social security and Medicare — are afforded to everyone who works legally in the U.S. Therefore, if you have a legal work permit, which the Obama action would provide to those who are eligible, and if you pay your taxes, then you are entitled to those benefits.

Lawyer Andrew Pincus, who filed a brief on the administration's side in this case, maintains that "Congress delegated this authority in the Immigration and Nationality Act." The purpose, he said, was "both to prioritize people for removal, and to confer work authorization."

Congress has never withdrawn the president's power to grant temporary legal status or work permits, Pincus said. "That's a system of laws and regulations that's been in place, and that the president is following as previous presidents did."

But Texas's Keller contends that the president went too far when he "changed the law" on his own.

"We don't have a carte blanche delegation to the president to unilaterally say, 'you're now lawfully in the country,'" Keller said.

Lawyer Pincus replies that the president's executive action does not grant citizenship or permanent legal status; it is just a three-year temporary grant of legal status that allows those eligible to work and support themselves and their American citizen children.

Whatever the merits of these arguments, it is possible that the court will never get to them. The administration maintains that Texas has no legal right to be in court at all because it has not suffered the concrete injury that is required to bring a lawsuit. Chief Justice John Roberts is known to be a stickler on this question.

Texas argues that it would indeed sustain a concrete injury under the president's executive action because the state has a policy of subsidizing driver's licenses, and a large number of people previously considered in the country illegally would be eligible for those licenses if they were granted temporary lawful status by the president's order.

The Obama administration counters that this is a self-inflicted problem for the state, and that Texas is free to charge more for these new driver's licenses if it wishes to.