Accessibility links
China Killed 1 Million U.S. Jobs, But Don't Blame Trade Deals Candidates on the campaign trail have blasted NAFTA and the TPP. But the rhetoric has been wrong, says an MIT economist, noting it's trade with China that's done a number on U.S. manufacturing jobs. 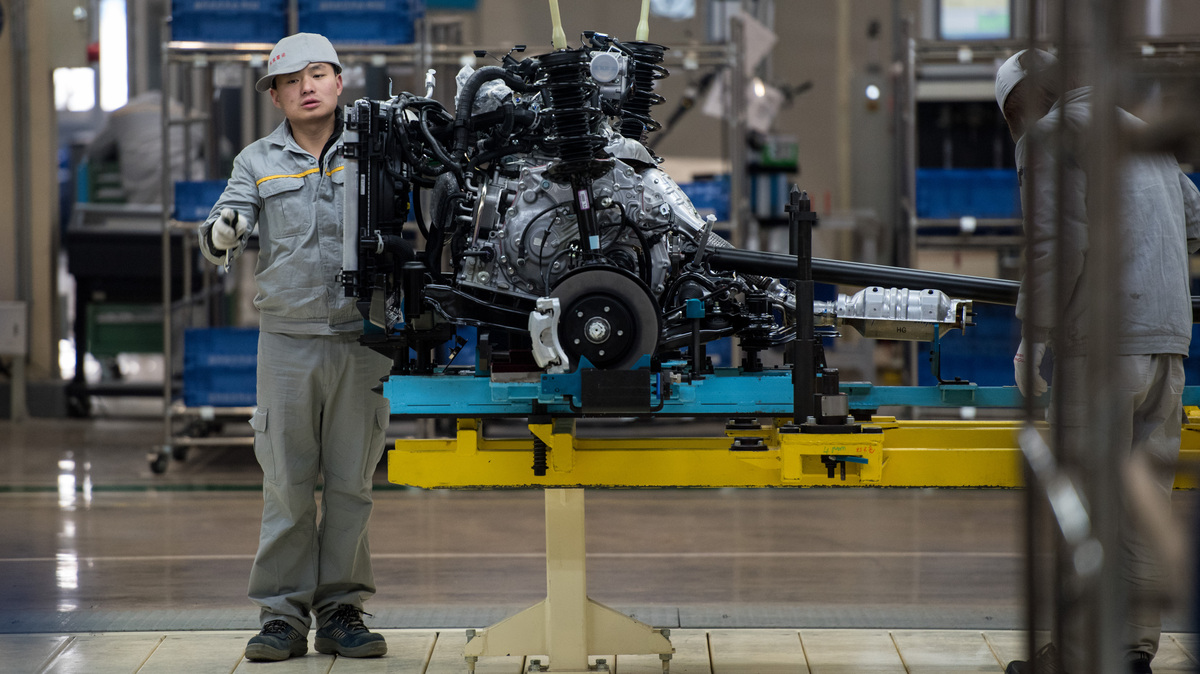 A Chinese worker checks part of a car at the production line of France's Renault and China's Dongfeng Group factory in February.

This week, NPR and some member stations will be talking about trade on the campaign trail and in communities around the country.

Economists for decades have agreed that more open international trade is good for the U.S. economy. But recent research finds that while that's still true, when it comes to China, the downside for American workers has been much more painful than the experts predicted.

And that's playing out on the presidential campaign trail in a big way.

If you're Bernie Sanders and you want to get your supporters fired up at a rally, bashing trade deals like the North American Free Trade Agreement and the Trans-Pacific Partnership is a good way to go. Sanders recently said to huge applause that his opponent Hillary Clinton wasn't qualified to be president because she supported "every disastrous trade agreement, which has cost us millions of decent-paying jobs."

Likewise, in a Fox News debate, Donald Trump said the TPP is "a horrible deal."

"It's a deal that was designed for China to come in as they always do through the back door and totally take advantage of everyone," he said. 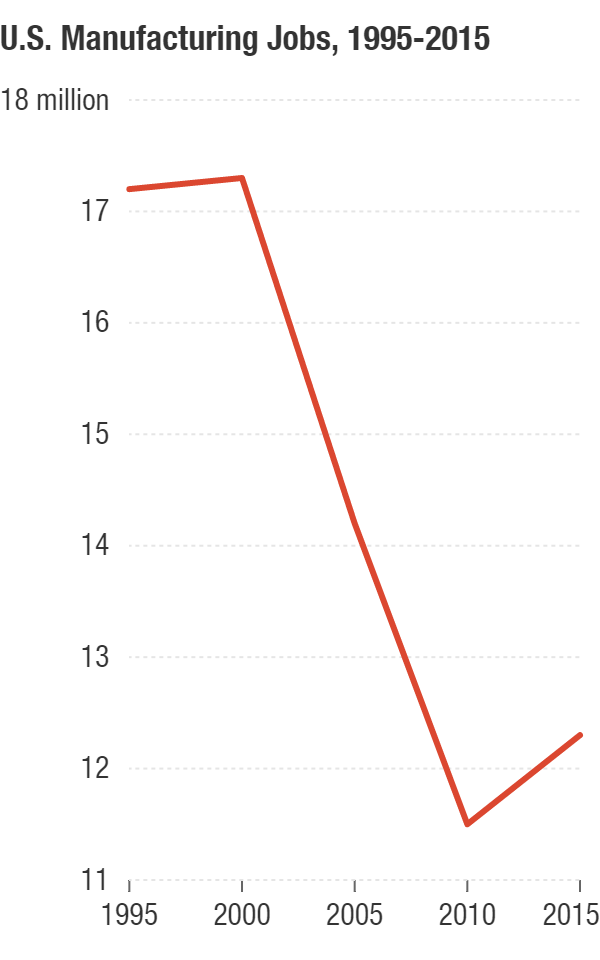 Over the past few decades, factory jobs have dropped amid technological advances and increased global competition. NPR/Bureau of Labor Statistics hide caption

But it's worth noting that China isn't even part of the TPP deal. The TPP is actually seen as an attempt to limit China's power and influence in trade. So Trump's criticism there is "just off-the-scales wrong," says David Autor, a labor economist at MIT.

Autor has been researching trade with China for years. He says the political rhetoric is often a confused mess, but it gets loud applause at rallies and debates because it's tapping into something real. "I think what politicians are correctly responding to is the reality that the last 35 years have been bad ones for blue-collar Americans," he says.

During that period, wages have been stagnant. Millions of manufacturing jobs have disappeared. It's not just trade that's to blame. Technology plays a big role: With computers and automation, factories and all kinds of other workplaces need fewer people. And that kills a lot of jobs.

If you look at NAFTA and trade with Mexico, Autor says, not that many U.S. workers have been harmed. But China, his research shows, is a different story. "China's rise is really a kind of a world historical event," Autor says. "This is the largest country in the world. It has caused a wholesale substantial contraction of U.S. manufacturing employment."

Autor says from 2000 to 2007, trade with China destroyed nearly 1 million U.S. manufacturing jobs. That's apart from other job losses due to technology and productivity gains and automation.

Trade theory doesn't say all workers will be protected. It says trade will make both countries better off. But how can that be true if trade with China has been so painful?

To understand that, let's consider U.S. trade with another country: France.

An Explanation Using Some Cheese And Toy Cars

The U.S. makes good airplanes and cars, and the French make good cheese.

So in an interview with Autor in his office at MIT, NPR's Chris Arnold gave him some toy cars to represent the U.S. To play France, Arnold had some hunks of Camembert and brie.

"I'll be France and you're America with the cars. So, how does this work where we both win?" Arnold asked.

"OK," Autor explained, "you make some really good gourmet food, and we'd sure like to eat it. I guess I could take some of my Chevy workers and I could say, 'Go spend two days a week making cheese and stop putting on hubcaps.' But they probably wouldn't be very good at it, and the end result would be bad cheese, fewer cars. Why don't we just trade? I'll give you some trucks, and you give me some gourmet food, and we'll both be doing the thing that we're good at. We'll both be focusing on our area of comparative advantage."

This is the magic of trade. With two countries doing what they're best at with the same number of workers and money and materials invested, together, they can create more, higher-quality stuff than either of them could separately. In that sense, it creates wealth for both countries.

China was different, though. For one thing, it's huge. And it began exporting all kinds of things U.S. manufacturers were already making, but China was selling them cheaper. That might not have been such a big deal if China wasn't so big. And more quickly than economists predicted, China was able to transform its rural society of nearly 1 billion low-wage workers into a cheap-labor manufacturing superpower.

"It was the proverbial boulder sitting on the top of a mountain for 100 years, and one day it started to roll down, and, you know, it is rather disruptive to those in the valley below," Autor says.

Disruptive because the Chinese boulder squashed a lot of American manufacturing jobs.

Still, "I don't want to go too far with that analogy," says Autor, "because we still win from trade with China."

Trade's Benefits Are Diffuse, But The Pain Is Concentrated

Everything from the shoes you're wearing, your watch, kitchen appliances, phone — so many things in our lives are cheaper or better because of international trade that, overall, despite the loss of jobs, Autor says, the U.S. and China still both come out ahead.

But here's the rub: Those benefits are large but diffuse. The harm — the pain for U.S. blue-collar workers — is concentrated. "If I lose my job at a furniture factory where I've worked for decades, no amount of cheaper toys and raincoats at Wal-Mart is going to make me whole again," Autor says.

So he wishes that this is what the national conversation could be about: Instead of bashing trade deals, he'd like to see a lot more focus on what can be done to help workers who've been displaced by trade. He says other developed countries do a much better job of this — and the U.S. is pretty lousy at it.