Accessibility links
'It Takes A Lot Of Bravery To Be Kind,' Says Kids' Author Kate DiCamillo DiCamillo says Raymie Nightingale, the 10-year-old protagonist at the heart of her latest novel, is a lot like she was as a child: "Very introverted, watching, worrying, wondering, but also hopeful." 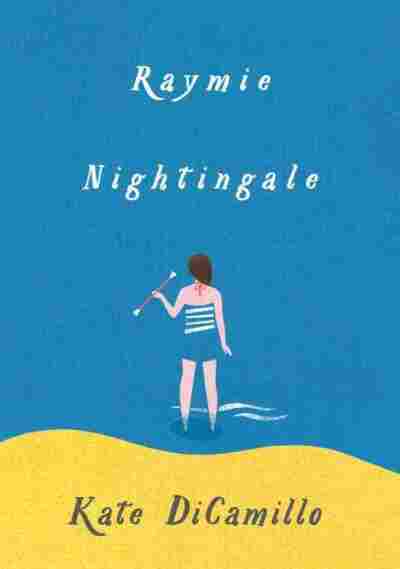 When Newbery award-winning author Kate DiCamillo talks to kids about how she became a writer, she sometimes shows them a photo of her own family.

"I would put up this picture of my mother, my brother and me and I would say to them, 'Who's missing?' " she tells NPR's Kelly McEvers. "Clearly it's my father." And kids get that right away.

DiCamillo was always getting sick as a child, and when she was 6 years old, her family moved from Philadelphia to Florida in hopes that it would help her get healthy.

"My father — he was an orthodontist — was supposed to sell his practice and move down to Florida but that never happened ... " DiCamillo says. "I would sometimes spend the summer with him and visit him, but he never lived with us."

As a kid, DiCamillo always wondered what she might have done differently — a question shared by the young protagonist in her new book, Raymie Nightingale. Like DiCamillo, Raymie grows up in central Florida in the 1970s. And 10-year-old Raymie is also struggling with the pain and loss of abandonment. She's convinced that if she can win the title of Little Miss Central Florida, she'll be able to reunite their family.

DiCamillo, who's now 52, says she was probably in her 40s before she stopped asking herself what she might have done differently to win her dad back.

On similarities between her and Raymie

Raymie is very much like the child that I was: very introverted, watching, worrying, wondering, but also hopeful.

I don't know what my mother was thinking, but she entered me in a Little Miss contest — Little Miss Orange Blossom, I think it was. And I don't remember anything about that except I have one flash-bulb memory of standing on the stage and thinking: This is not where I should be. Raymie is very much like the child that I was — very introverted, watching, worrying, wondering, but also hopeful.

On Raymie being a "haunted" child

[She's] haunted by the beauty of the world. There's a moment in the book where ... she goes to read to somebody in a nursing home and the floor of the nursing home has been polished ... so it looks like a lake and it's just beautiful and the light is hitting it and Raymie has this feeling that she's going to understand everything, everything's going to make sense. And I had that feeling all the time when I was a kid. So she's haunted by that feeling of almost tangible understanding and beauty in the world.

An Orphan, An Elephant And A Hapless Magician

On Beverly Tapinksi and Louisiana Elefante, the characters Raymie teams up with

When I sat down to write the book I thought it was just going to be a funny thing about an inept child, i.e. me/Raymie being in a beauty contest — a place she should not be. And then these characters that I did not anticipate, Louisiana and Beverly, showed up almost immediately.

There's a moment in the book — because Beverly's this gruff kid who carries a pocket knife and is studying how she can crack safes and wants to sabotage the Little Miss Central Florida Tire contest – but there's this moment in the book where they're in the nursing home and there's this woman who keeps screaming, "Take my hand!"

And Beverly, the toughest of all nuts, walks into this terrifying room and takes hold of this woman's hand. Talk about haunted. I'm still haunted by that moment because that's always the kid that I wanted to be and I wasn't. I wasn't brave enough to be that way. ... It takes a lot of bravery to be kind.

On what she learned writing Raymie's character

I don't want to give a spoiler alert about something that happens in the book but it wasn't until after I finished the book that I ... [realized] that I was, as a kid, stronger than I thought I was. ... Raymie does something that surprises herself and surprised me and made me realize ... you're stronger than you think you are.