Accessibility links
Out Of The Horror In Oklahoma City, Merrick Garland Forged The Way Forward Twenty-one years ago, Garland — now nominated to the Supreme Court — supervised the investigation following the bombing that killed 168 people. 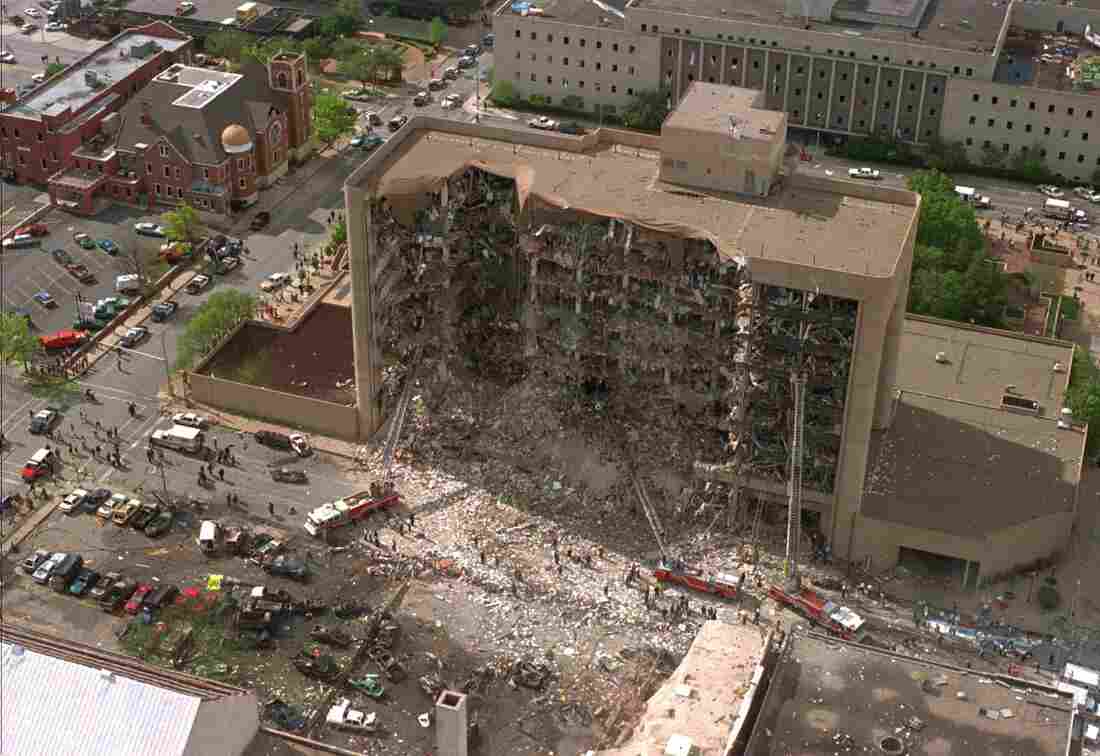 The north side of the Alfred P. Murrah Federal Building in Oklahoma City is missing after a truck bomb exploded on April 19, 1995. AP hide caption 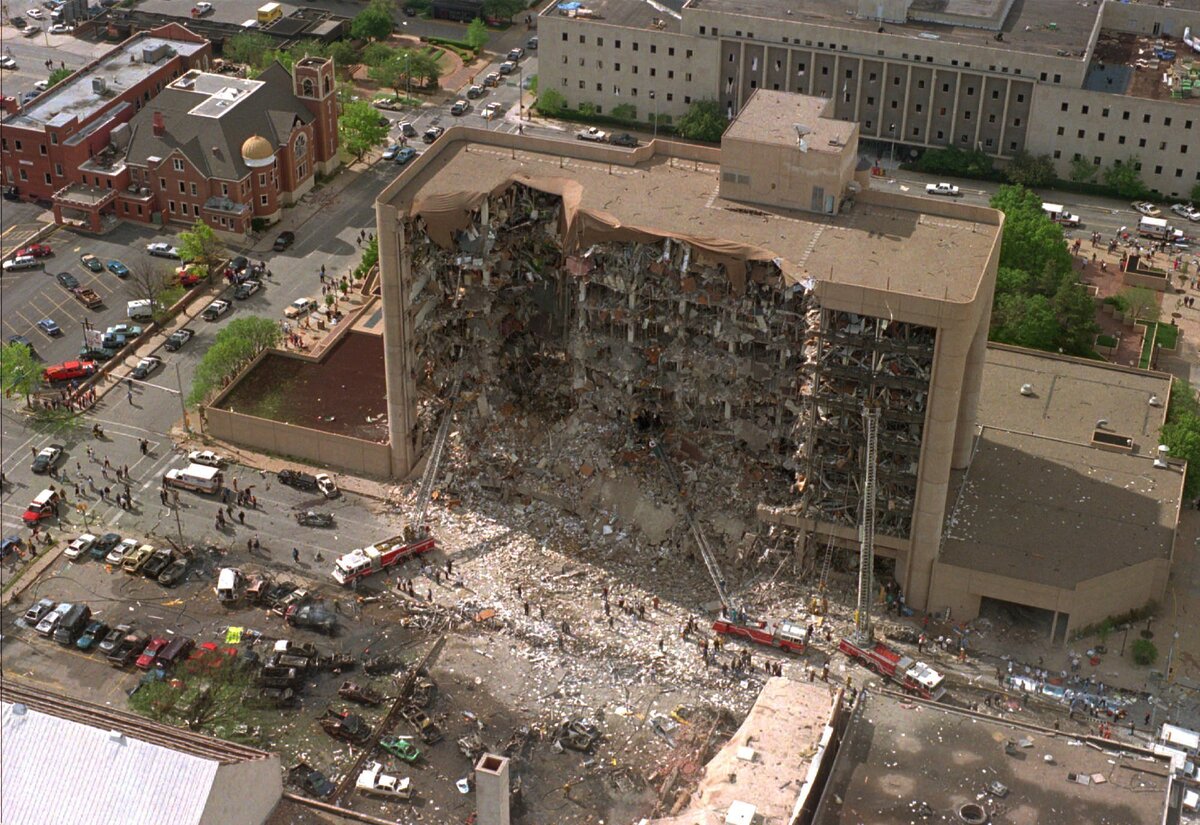 The north side of the Alfred P. Murrah Federal Building in Oklahoma City is missing after a truck bomb exploded on April 19, 1995.

Twenty-one years ago, the nation was rocked by the largest domestic terrorism attack it had ever experienced. A bomb at the Alfred P. Murrah Federal Building in Oklahoma City killed 168 people, including 19 children in a day care center on the ground floor.

Within days, Merrick Garland would arrive on the scene to supervise the investigation and prosecution. Most Americans would not hear his name again until last month, when President Obama nominated Garland, now a judge, to the U.S. Supreme Court.

For Garland, the bombing would be a defining moment, as he made clear in the Rose Garden ceremony last month.

Video: Why President Obama Picked The 'Only White Guy' On His Shortlist

To examine Garland's role, NPR spoke to key players involved in Oklahoma City and got special access to an oral history he made in 2013 for the Oklahoma City National Memorial & Museum.

Today, in 2016, we are more used to the horror of terrorism. But in 1995 on this date, the idea of such an evil deed was beyond most Americans' imaginations.

At 9:02 in the morning, the 7,000-pound bomb hidden in a Ryder truck exploded with such force that it destroyed or damaged buildings within a 16-block radius. 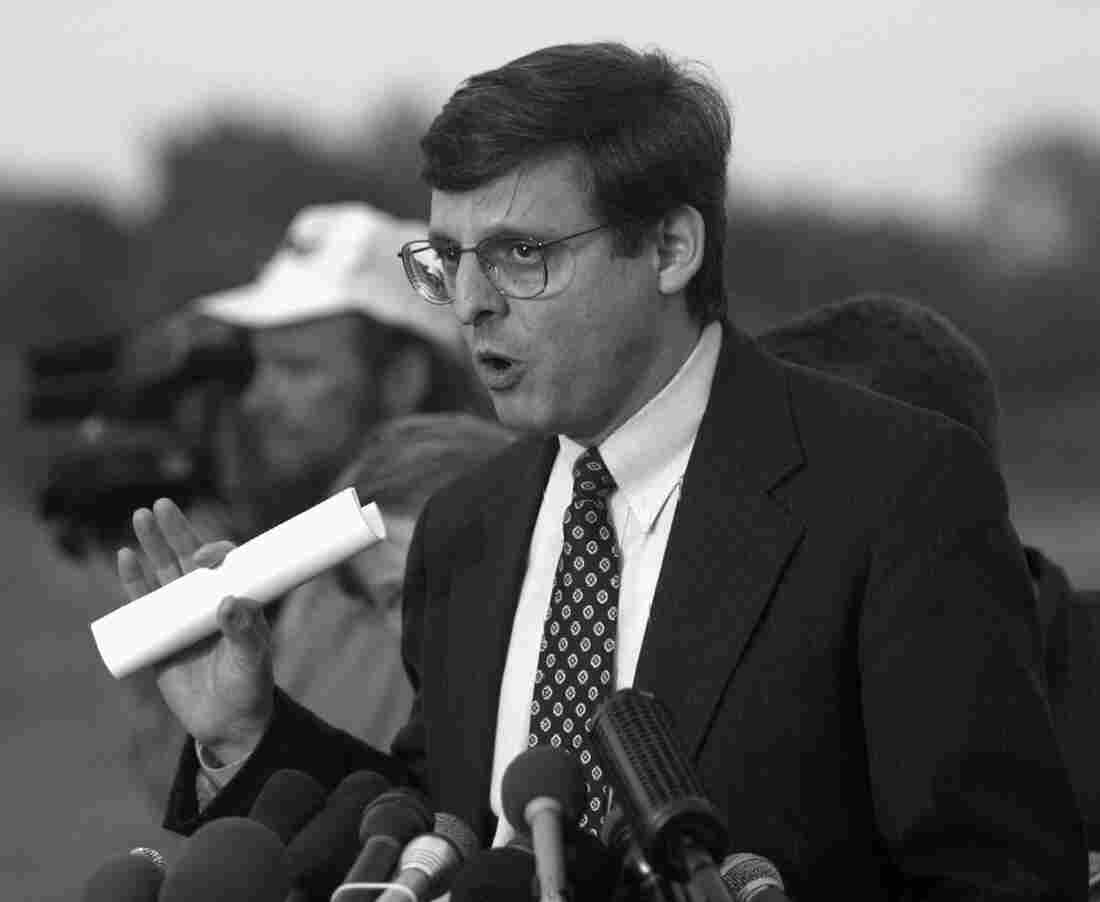 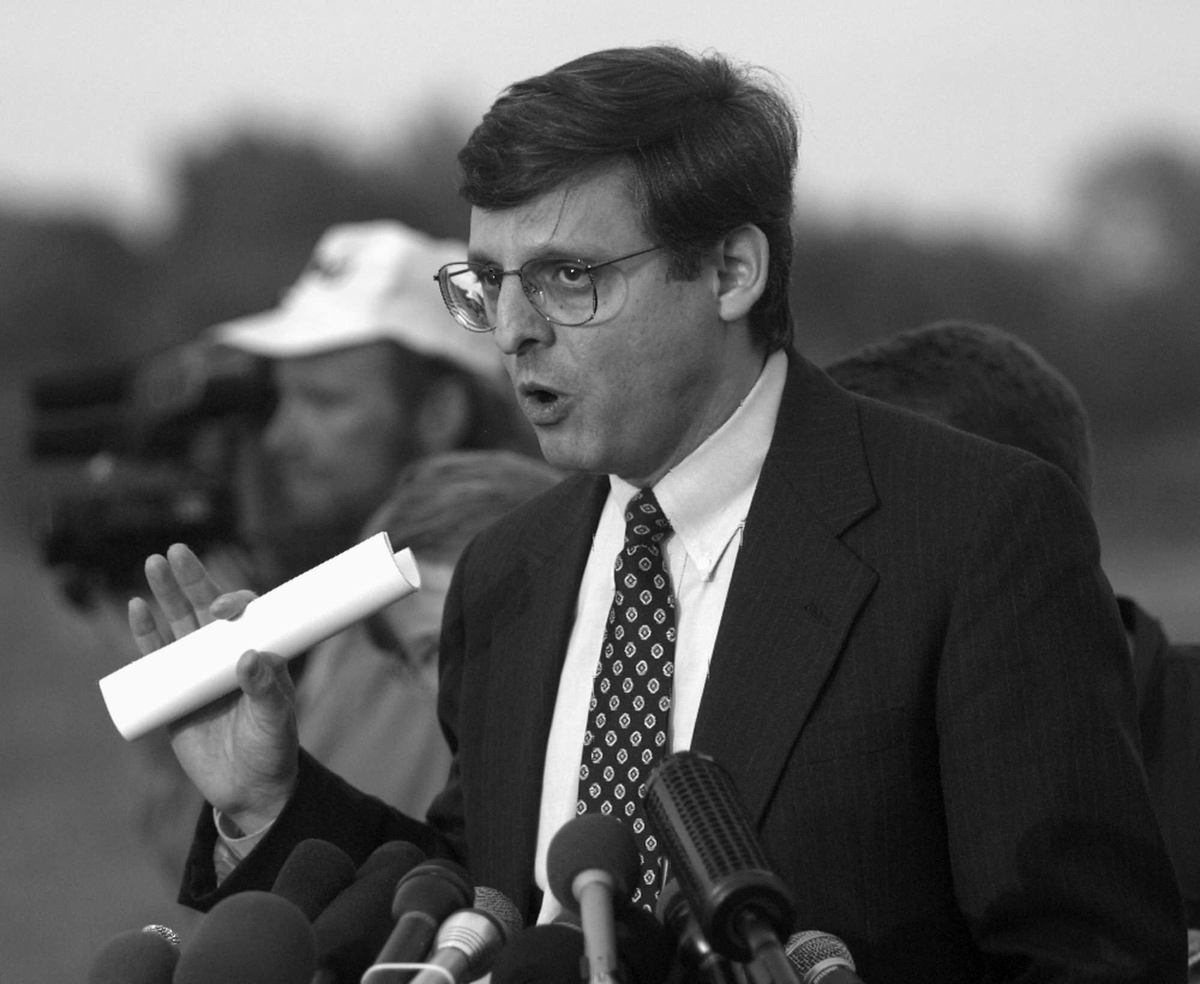 In Washington, D.C., Merrick Garland, the No. 2 in the deputy attorney general's office, huddled with the Justice Department top brass. His boss was Deputy Attorney General Jamie Gorelick.

"Both of us had kids about the ages of the kids in the day care center," Gorelick said. "We were just sick to our stomachs. And Merrick said, 'I need to go.' "

Within two days, the Justice Department had identified a suspect and was looking for him as Garland boarded an FBI plane headed for Oklahoma City. En route, Attorney General Janet Reno called.

"She said, 'We found him. He's at a jail in Oklahoma. And you're going to be doing the initial hearing tonight,' " Garland recalled in his oral history.

On landing, he drove immediately to Tinker Air Force Base, a secure location where the suspect — Timothy McVeigh — was to be arraigned. Outside, an angry mob of reporters wanted to be let in. Inside, Garland was told: You don't let the press and the public on a military base.

"No, no, no," he replied, according to Donna Bucella, a Justice Department official who had come from Washington to help set up the command center. "We don't want to do it that way," he told officials at the air base. "It's going to be bad enough that there are going to be conspiracy theories. The law requires an open hearing." 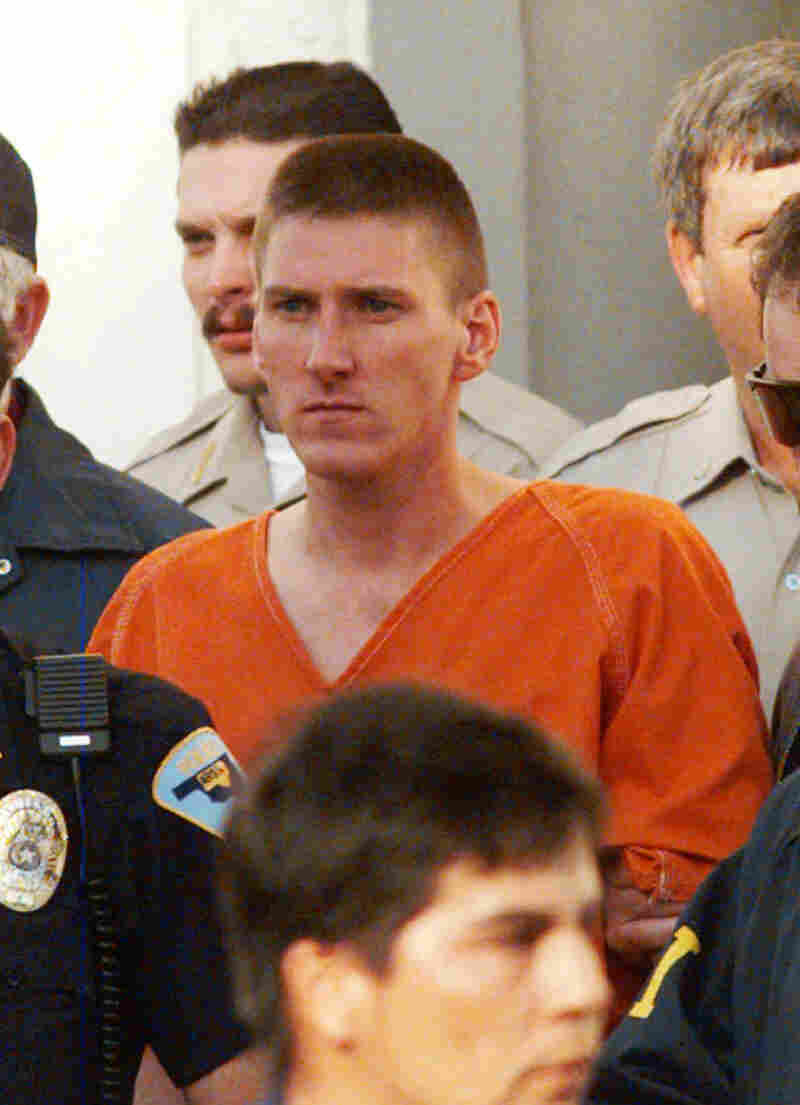 It was the first of thousands of decisions, large and small, that Garland would make to ensure that the investigation and prosecution would be as flawless as possible. After the arraignment that night, he went directly to the bomb site, where the nine-story federal building was all but obliterated and rescue workers were still searching for bodies.

"The site was lit up like ... the day, because of big lights everywhere," said Garland. "The extent of the catastrophe was immediately apparent, a gaping hole in the building and everything. And the worst part was being told ... [that's] where the kids had been."

Even years later, Garland, sitting in the quiet of his office for the oral history, was overwhelmed by the memory of the crushed day care center.

Back then, though, the immediate problem was getting a grip on the investigations that splayed out across the country.

Because McVeigh and his collaborators had moved across many states in executing their plot, grand jury investigations were springing up in a half-dozen different states. There were competing local, state and federal agencies involved, including agencies that had lost men and women in the bombing. But the Justice Department was determined there would be one investigation only; the FBI would take the lead, and Merrick Garland would supervise it all from Oklahoma City.

"There's a lot of potential for territorialism — for people to say, 'You're stepping on my toes, this is my area, this is my city, this is my FBI office,' " recalled Patrick Ryan, who was the U.S. attorney in Oklahoma City. "Merrick was able to navigate that, and I don't think many people could have done that."

Garland was also worried about the victims' families and the survivors, according to Nolan Clay, who covered the bombing for The Daily Oklahoman. Prosecutors often view victims as "a bother," Clay observed, adding that prosecutors frequently "just don't want to deal" with traumatized families. 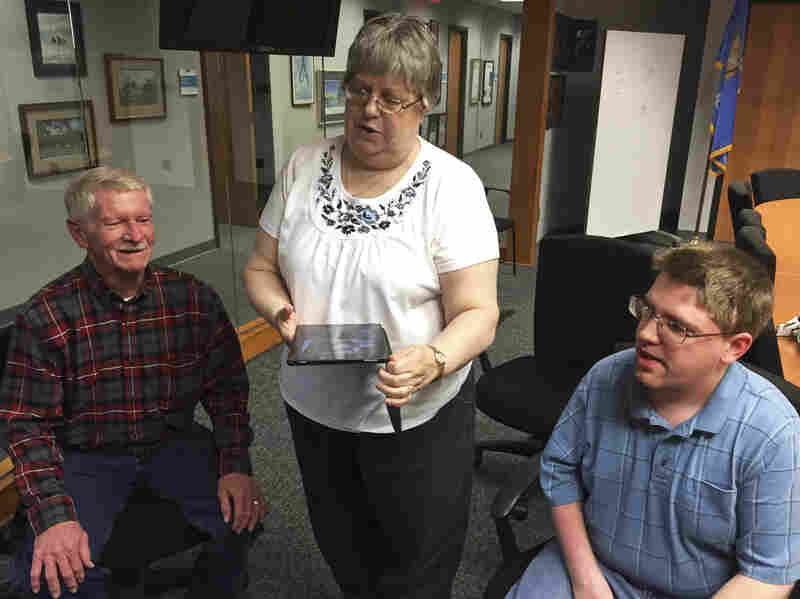 Claudia Denny (center), her husband, Jim (left), and their son Brandon, who was in the day care center at the Murrah building during the bombing. Art Silverman/NPR hide caption 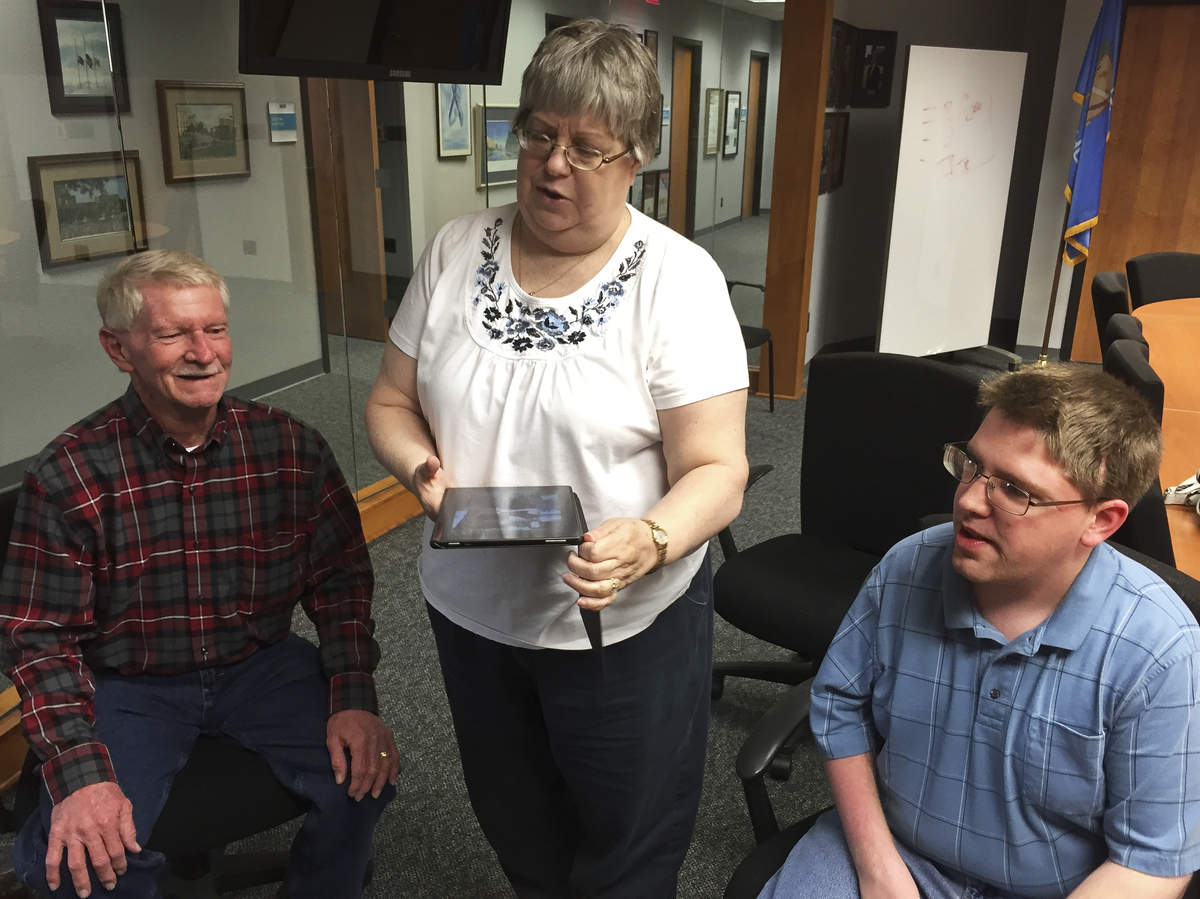 Claudia Denny (center), her husband, Jim (left), and their son Brandon, who was in the day care center at the Murrah building during the bombing.

But the Oklahoma City bombing case was different, he said. "The victims did have an important role." Garland "set the tone early — 'Let's make sure, let's keep the victims up to speed with what's going on.' "

Claudia Denny, who worked for the IRS in the Federal Building, had two children in the day care center who were horribly injured but miraculously survived.

"Early on, we got invited to the U.S. attorney's office. They wanted all of our concerns, and I think Judge Garland set that up where we all got our voice heard," she said.

What haunted Garland and others from the Justice Department was the specter of the O.J. Simpson trial the previous year, and how botched police procedures led to an acquittal.

It was a cautionary tale, noted Gorelick, the former deputy attorney general.

"People wanted to give us evidence that we couldn't lawfully take. And the investigators of course wanted to accept it because it was good evidence on which they could act," she recalled. "So Merrick was the person saying, 'No, for every piece of evidence we are going to have a subpoena, a search warrant. We are going to do this by the book.' "

Even Stephen Jones, the lead defense lawyer, said Garland did it by the book. As Jones looked for issues on appeal, he was able to review all of the government's applications for wiretaps that were submitted in secret during the investigation.

"I read all those applications, and they were pretty tightly drawn," Jones said. "In hindsight, that was the correct thing to do." 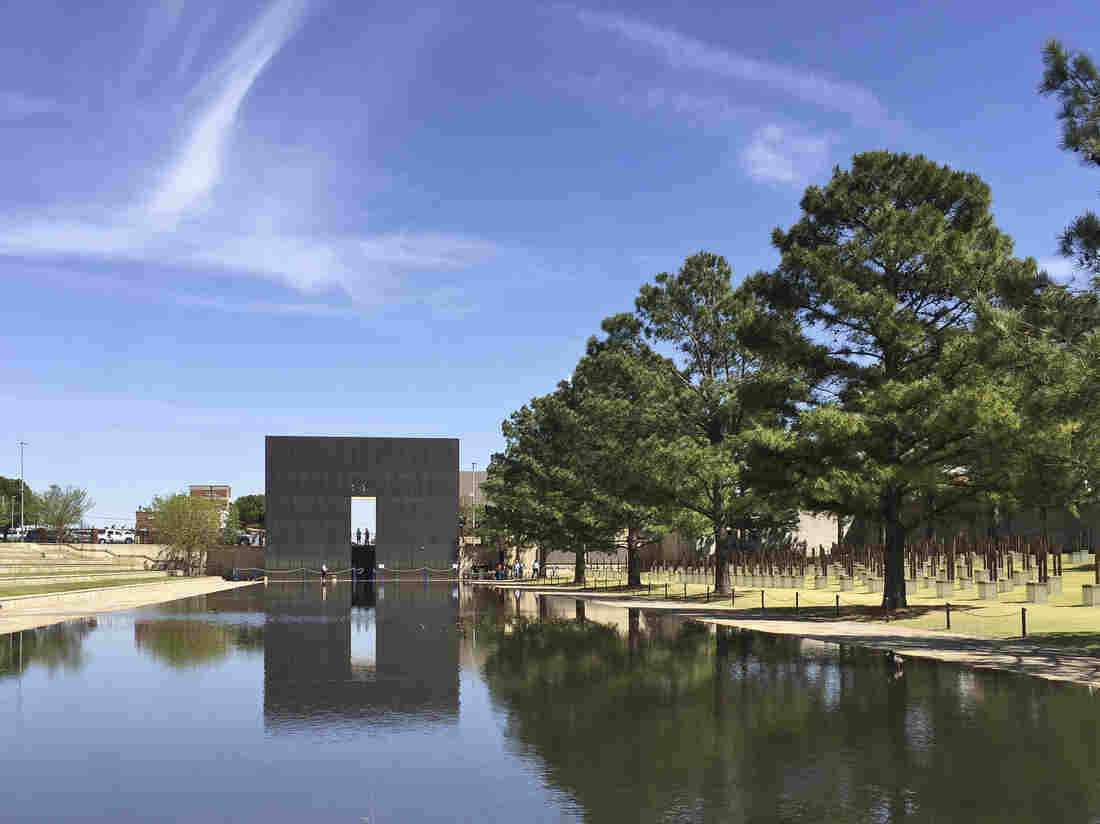 The Oklahoma City National Memorial and Museum honors the 168 people who were killed in the bombing on April 19, 1995. Art Silverman/NPR hide caption 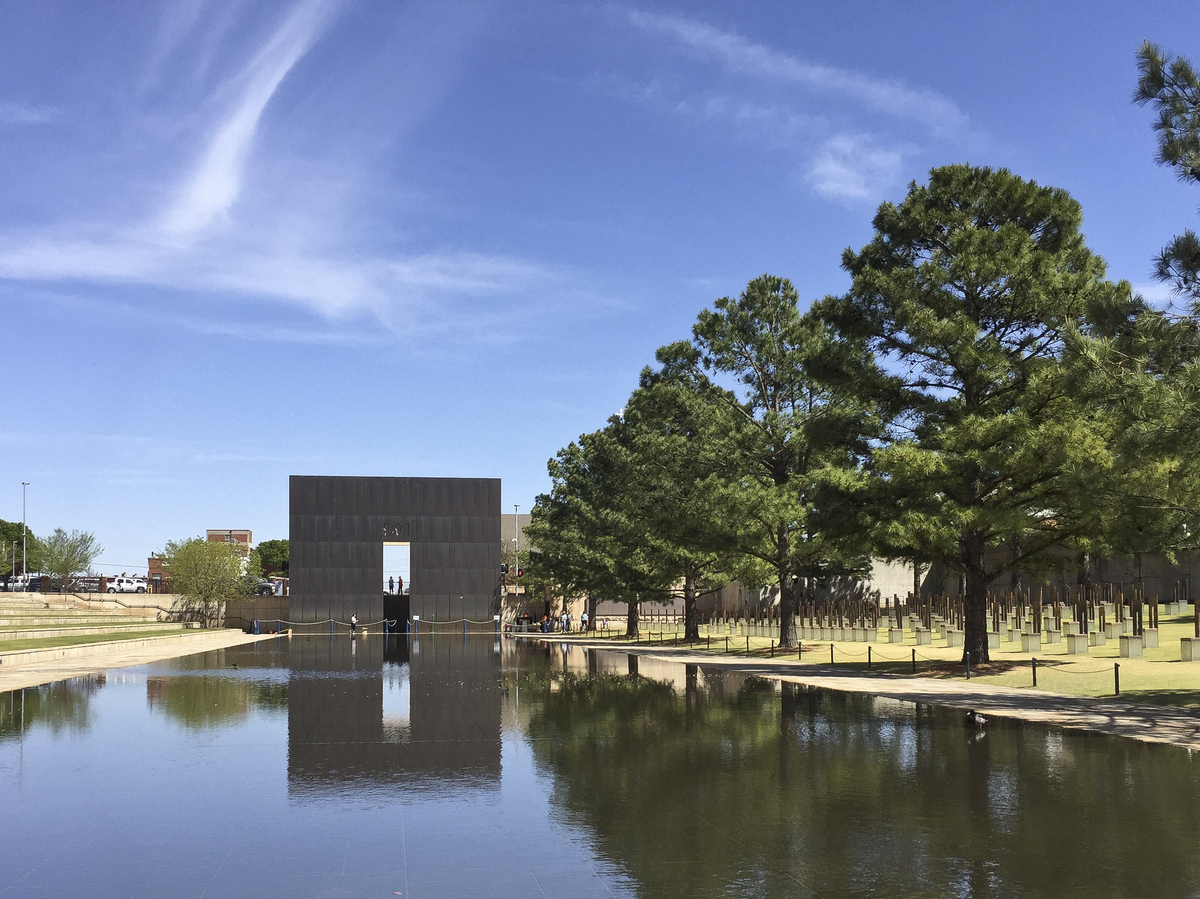 The Oklahoma City National Memorial and Museum honors the 168 people who were killed in the bombing on April 19, 1995.

From the get-go, Garland was looking down the road at the eventual trial and the appeals that would follow. "My own experience had been, several years after even very bad crimes — it looks different, and so you want to be sure that every 'i' was dotted and every 't' was crossed," he said.

The Oklahoma City bombing also came two years after the FBI siege at the Branch Davidian compound in Waco, Texas, a disaster for the government, in which 76 people died.

"Imagine if we had gone into Oklahoma City in a way that made us look like jack-booted thugs," Gorelick said. "That's what people thought of us after Waco. That's what was motivating Tim McVeigh, he says. We would have had a vastly different result — not just in the case — but in the country."

Frank Keating, the governor of Oklahoma at the time, and a Republican, also points to the contrast between the handling of the bombing case and the O.J. Simpson and Waco cases. He notes that McVeigh was tried, convicted and executed in a remarkably short time; and Keating gives the credit to Garland. 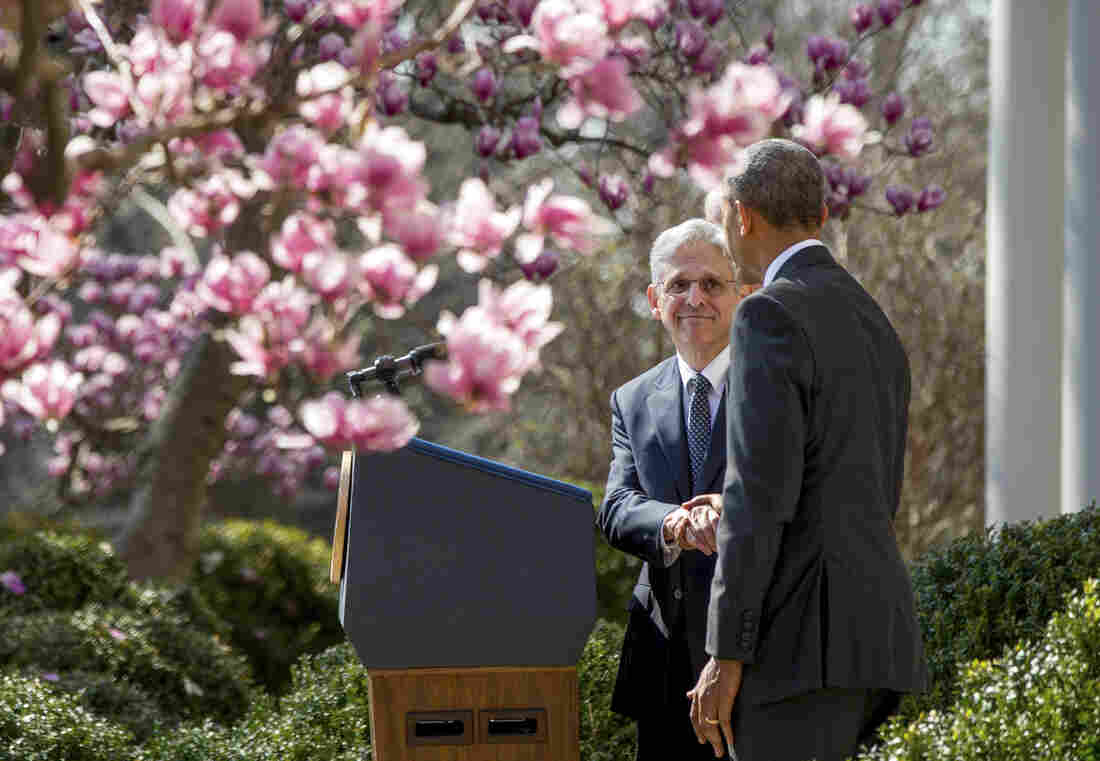 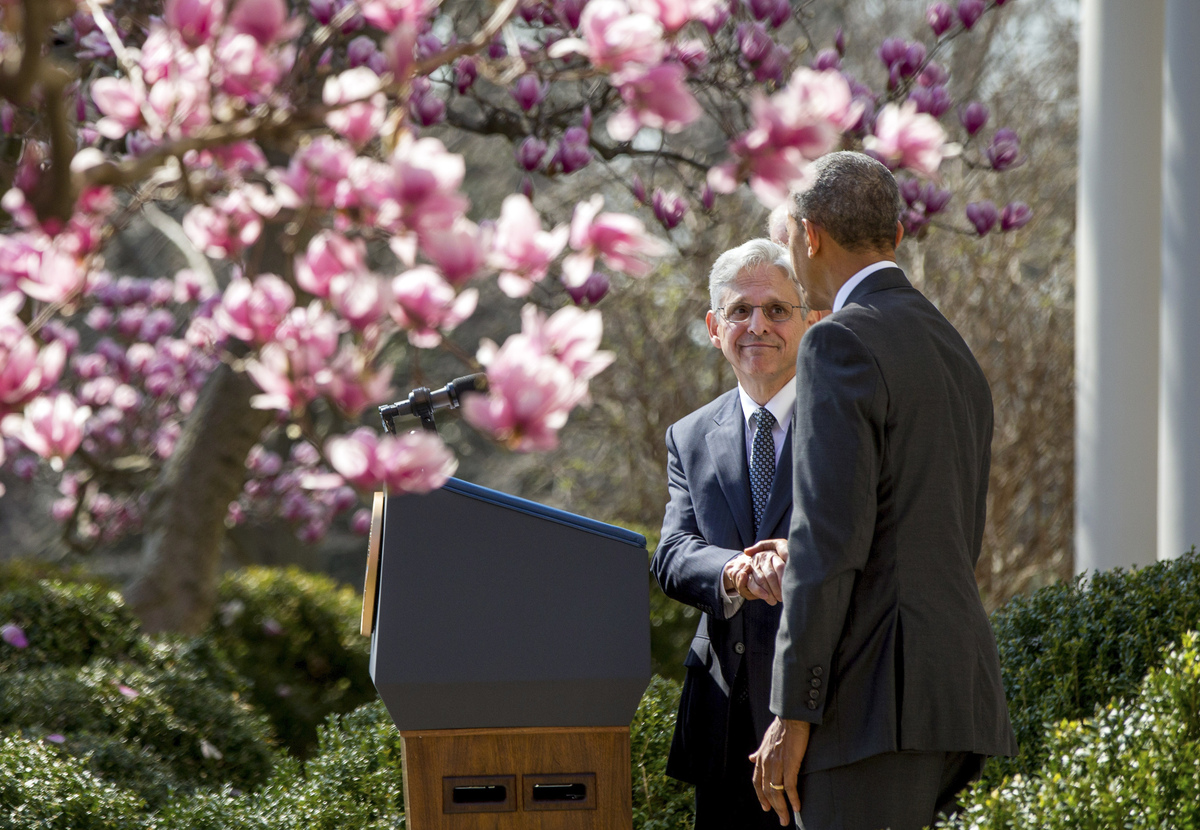 Supreme Court nominee Merrick Garland shakes hands with President Obama in the Rose Garden of the White House on March 16.

"It would not have happened but for his leadership," Keating told NPR. "And to look at something as Garland and his team did with an icicle focus, I think, was a superb act."

In the case of what we saw after April 19, there was a chef in the kitchen that did it, and it was Merrick Garland.

In his Oklahoma City oral history, Garland said he learned an important lesson about the new world of terrorism that the U.S. was then entering.

"We made it up as we were going along, and it was clear when that was over that we couldn't do that again," he said. "We had to have a system."

When Garland got back to Washington, D.C., the Justice Department began in earnest to develop that system. It's a system that has been continually perfected and used since then, for everything from mass shootings to 9/11.