Accessibility links
Book Review: 'Join' By Steve Toutonghi Steve Toutonghi's new novel imagines an America where people can fuse their psyches together and share a single body — but the story's compelling urgency is sometimes buried in exposition and theory. 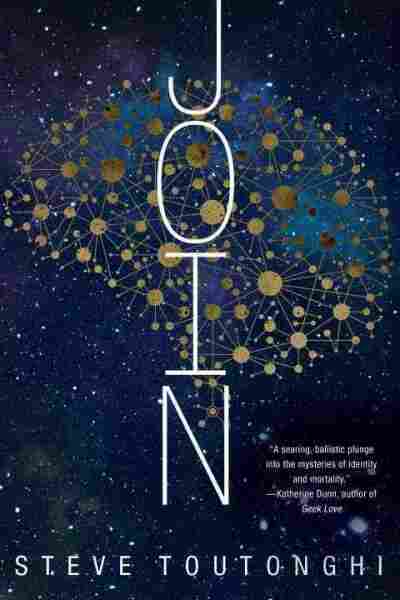 Every day, people get more and more connected — thanks mostly to technology, which has increasingly drawn humanity together in a way that's both heartening and not. In Steve Toutonghi's debut novel Join, he probes those technological connections between individuals in a science-fiction setting, a vision of America where citizens routinely connect to each other using a medium called the quantum personality matrix. Through surgery and science, two or more people are able to fuse their psyches into a single, shared identity, called a join.

Toutonghi is well qualified to speculate on such a premise; a tech worker with Silicon Valley credentials, he also has a degree in anthropology. And while that background gives Toutonghi a unique perspective on the way humans interact with technology, Join — as enthralling as it is — suffers from a few disappointing glitches in execution.

In a future United States ravaged by megastorms and coastal flooding, Chance is a join — a network of three men and two women sharing five bodies but single, collective consciousness. Their newest addition is a college student named Javier who's just been diagnosed with terminal cancer. Death isn't the end when you're joined; after your body gives out, your consciousness lives on in the collective. Still, the death of a drive (as each member of a join is called) is traumatic for the whole — so, in an attempt to prepare for the inevitable, Chance seeks the counsel of Rope, one of the first joins in history, a pioneer who's sunken into alcoholism and self-destruction.

In juggling so many heady themes, Toutonghi opts for huge blocks of exposition and theorization. It's often rendered beautifully ... but it muffles the thriller at the heart of the book.

The encounter does not go as planned. Before long Chance and its coworker Leap get sucked into a plot that involves unjoined "ferals" who live far below the spired cities of the affluent, and an entity known as Excellence who heads Vitalcorp, the powerful company that licenses the quantum personality matrix — for a hefty fee that regulates an insidious social order.

It's a lot to tackle in an average-length novel, but Toutonghi's ambition doesn't stop there. Like the best-known sci-fi author with a background in anthropology, Ursula K. Le Guin, he combines smart, imaginative extrapolation about technology and a deep curiosity about civilization and the human condition. Along the way, he brings up head-spinning questions about individuality, society, ecology, euthanasia, aging, death, immortality, tech industry politics, class, polyamory, and gender identity.

He also raises one of sci-fi's oldest quandaries: the consequence of our sometimes headlong rush to embrace scientific progress, not to mention the lag between the development of new tech and our ability to fully comprehend and process it. "An individual choice can seem independent, but if you look at a whole population, thousands, millions of individuals, the outcomes are always predictable," Rope says. It's a chilling observation about the nature of the individual verses the nature of the group, and it lends Join a compelling urgency.

The pace isn't quite so urgent. In juggling so many heady themes, Toutonghi opts for huge blocks of exposition and theorization. It's often rendered beautifully — he seems most inspired when writing about science — but it muffles the thriller at the heart of the book. It doesn't help that each of Chance's and Leap's drives, nine in total, are given point-of-view scenes, and that they're attributed to "Chance One," "Leap Three," and so on. The narrative is needlessly cluttered; the dialogue is stiff and dry. And some of Toutonghi's most intriguing themes — particularly those regarding gender and sexuality — cry out for a more thorough exploration. Luckily the sheer scope and richness of ideas mostly make up for the occasionally clunky narrative. Join may not always be a fascinating story, but it's always a fascinating read.