Angels, Mobsters, Monsters: This 'Box' Really Does Have Everything

Angels, Mobsters, Monsters: This 'Box' Really Does Have Everything 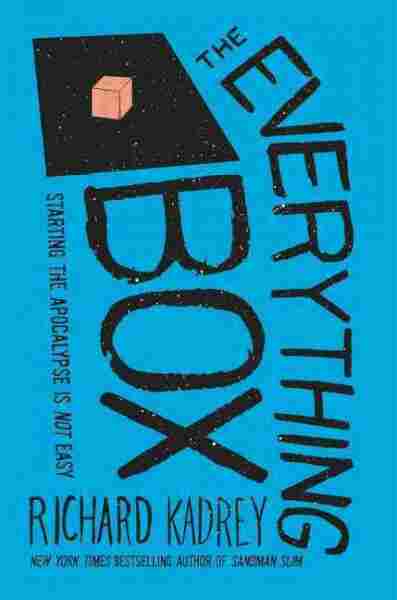 Here's the thing about Richard Kadrey: He's a lightweight.

And I don't mean this in a bad way. I mean this, in fact, in the best possible way. He's an easy read. His characters have wit and style. His books are a romp — irreverent (quite literally), madcap and buoyant — and they go down like cold lager on a hot afternoon.

He will charm you, that Kadrey. He'll hit you with the heavy stuff — the demons and monsters and the end of the world — that most serious writers of whatever it is he's writing (detective noir, supernatural thrillers, subversive sci-fi middle fingers) would save for their grand, crashing finales, but he'll give it to you in the first couple pages, cover it in stripper glitter, and have someone get socked in the nose.

His new book, The Everything Box, is like that. It begins with the end of the world — with Qaphsiel the angel coming down from heaven 4,000 years ago, tasked with finishing off the dregs of humanity that God's flood hadn't quite drowned. Serious stuff. Except that Qaphsiel is kind of a sap. His day job is being in charge of the office supply closet in heaven and he's just doing this gig in hopes of getting a promotion. Also, when he meets with the filthy representative of humanity's remnants, said representative does indeed punch Qaphsiel in the nose. And then, just when he's getting all wrath of God-y and preparing to open the titular macguffin — the box which will end the world — he realizes that he's misplaced it. Lost it somehow. And now he has to find it before someone else does.

Back To The Future — The Grim, Grimy, Chrome-Coated Future

'Sandman Slim' Is Urban Fantasy With Brains, Guts And A Blackened Heart

Flash forward to modern day Los Angeles and a thief named Coop, who specializes in burgling magical doodads from all manner of self-important (and generally also magical) jerks. He's a wise-cracking second-story man, cast in the mold of every wise-cracking second story man ever, but with one important difference: He's immune to magic. Which is a nice perk to have because Kadrey's L.A. is, on the surface, very much our L.A. (populated believably with dimwits, psychopaths, celebrities, tourists and fools), but is also a little bit like J.K. Rowling's London. The magic exists just below the surface, in hidden places not accessible to the unimaginative.

Unlike Rowling's London, though, Kadrey's L.A. magic has no wonder to it. It's all gross and sticky, violent, apocalyptic, sexy, on fire, and sometimes all of those things at once.

There are vampires and tentacle monsters. Revenants and zombies. There's Coop (brokenhearted, of course, by a woman who done him wrong; well acquainted with the whiskey sour and in love with old movie musicals) who blows a job, almost gets eaten by a dragon, and lands right in the laps of the Department of Peculiar Science — the LAPD thaumaturgy squad. And of course they have a job for him. One that requires his special talents — plus those of his only friend, the woman who done him wrong, a nervous ghost who lives in Coop's head, and on and on and on.

'The Everything Box' ... trots out just about every scam, gimmick, and hoary trope used by three generations of noir novels and heist movies, then garlands them with neon and sticks sparklers in their hair.

The whole book is one long corkscrewing slip-and-slide. Hit 'em with the angels and the end of the world, Kadrey seems to think, and if they buy that, no one's gonna blink when the ancient hillbilly doomsday cult who gather in a motel room above a fish restaurant show up...

And you know what? He's absolutely right. The suspension of disbelief required for The Everything Box is both massive and easy as pie. It trots out just about every scam, gimmick, and hoary trope used by three generations of noir novels and heist movies, then garlands them with neon and sticks sparklers in their hair. There's as much Sam Spade in here as Good Omens, but it works (addictively, really) because Kadrey just seems to be having so much fun smashing his toys together while we watch.

And sure, by the midpoint of the book you think you know exactly how it's all going to turn out. But that's part of the fun because you're right, of course. It's going to go just like you think it is. But you're also dead wrong because Kadrey just keeps building and building the ending, layering on the weirdness, the monsters, the mobsters and the stiffs until the pure act of an author keeping all those balls in the air becomes almost as much fun to watch as the bloody, ridiculous conclusion.

Yes, the giant puffer fish came as a bit of a surprise to me, too, but hey... After the 4th kidnapping, the werewolf fight, and the broken office microwave that was secretly a portal to another dimension, I wasn't anything except along for the ride.