Accessibility links
Support For Legal Pot Is High. But It Might Not Stay There The swing in public opinion on marijuana legalization has been as quick as the swing on same-sex marriage. But there's reason to think it could fall. 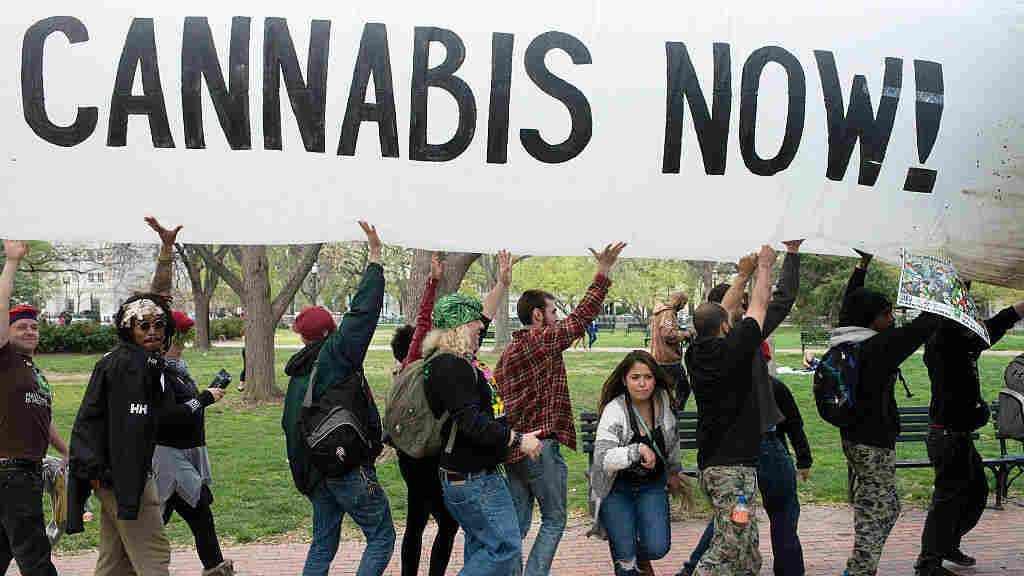 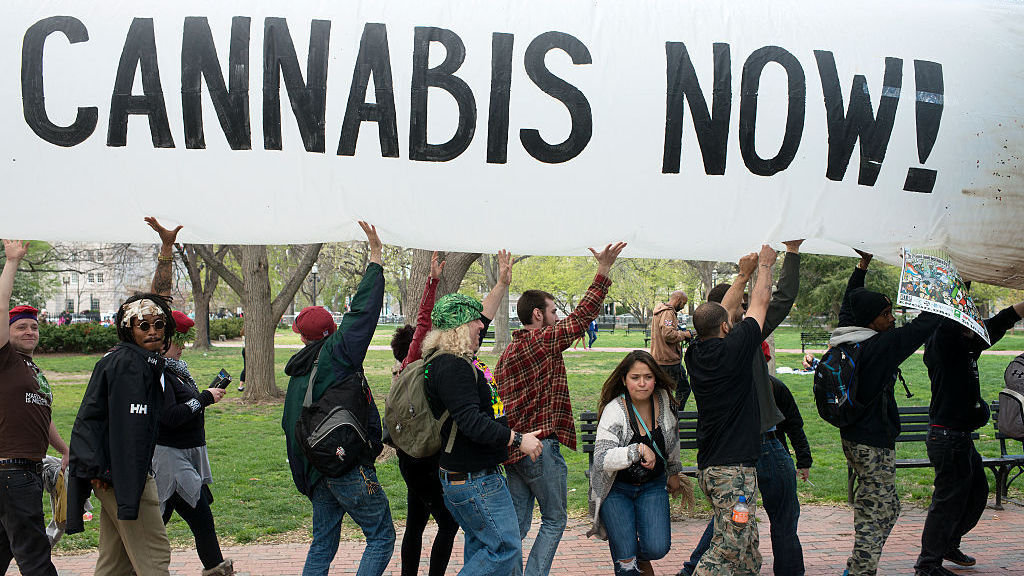 Hundreds of advocates for marijuana legalization rally and smoke pot outside the White House in Washington, D.C. on April 02, 2016.

Public opinion on marijuana has risen dramatically over the last couple of decades. In the mid-1990s, only around 25 percent of Americans thought pot should be legal, according to Gallup.

Today, it's around 58 percent.

That's a really fast change in opinion. In fact, it's about as fast as Americans' about-face on same-sex marriage — a change of opinion that was itself remarkably fast. As of 1996, 27 percent of Americans thought same-sex marriages should be recognized the same as different-sex marriages.

One question is what has driven this boom in marijuana acceptance. According to Jonathan Caulkins, a professor of public policy at Carnegie Mellon University, a few trends have helped boost Americans' opinions: rising acceptance of medical uses for marijuana, deep-pocketed supporters like George Soros, concerns about racial disparities in marijuana arrests and concerns over prison sentences for non-violent drug offenders are four that he considers major factors.

Those have pushed up support, but that doesn't mean it will keep climbing. The Baby Boomers are a great example of why this is. In the late 1970s, when they were in their late teens through their early 30s, nearly half of boomers supported legalization, according to Pew. Then they fell off dramatically when they were in their 20s through 40s, only to pick up steadily again.

One reason for that may be that they stopped supporting marijuana legalization once they had kids old enough to smoke it — and then started supporting it again once the kids left home.

Having kids at home is one of the "big predictors of opposing marijuana legalization," Caulkins said, along with religiosity.

It's true that support for marijuana has risen across generations over the last couple of decades. But that support may level off if today's millennials temporarily decide that it's not a great idea to legalize it — once their own kids are old enough to potentially use pot.

There's also evidence that many who support marijuana legalization do so with "ambivalence," as the Brookings Institution's William Galston and E.J. Dionne write in a 2013 paper.

"Support for legalization, though growing markedly, is not as intense as opposition, and is likely to remain relatively shallow so long as marijuana itself is not seen as a positive good," they wrote. They noted that many who support legalization nevertheless think marijuana is harmful. (However, they add that many conservatives who oppose legalization also favor states' rights to do so.)

Whether today's high levels of legalization support continue to strengthen, they add, is a question of how successful current state legalization initiatives appear.

Unintended consequences in the four states (plus the District of Columbia), where pot is legal, could hurt the legalization movement. A new report from Colorado provides some ammunition for both sides in the legal marijuana fight, according to Vox's German Lopez. It found that while arrests for marijuana dropped and tax revenue went up, marijuana-related visits to hospitals and calls to poison control centers went up.

And while public opinion has swung in favor of pot legalization, just like it seems to have turned decisively in favor of same-sex marriage, big shifts on major issues like these aren't necessarily permanent.

In the 1990s, it seemed like more people were starting to accept legal abortion in all circumstances, but that support fell off. Likewise, support for the death penalty has risen and fallen — sometimes hugely — over time.