Accessibility links
Movie Review: THE HUNTSMAN: WINTER'S WAR The Huntsman: Winter's War feels like it's borrowed from, strangely enough, both Frozen and Game Of Thrones. If you think that sounds strange, you're not wrong.

No Snow This Time Around, So The 'Huntsman' Should Probably Let It Go

No Snow This Time Around, So The 'Huntsman' Should Probably Let It Go 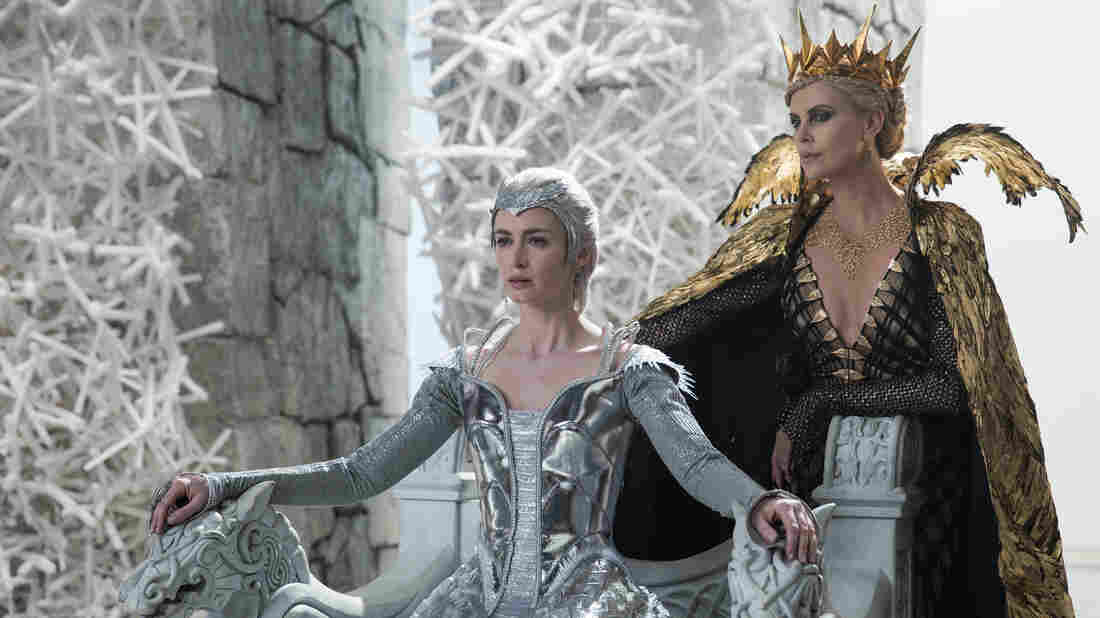 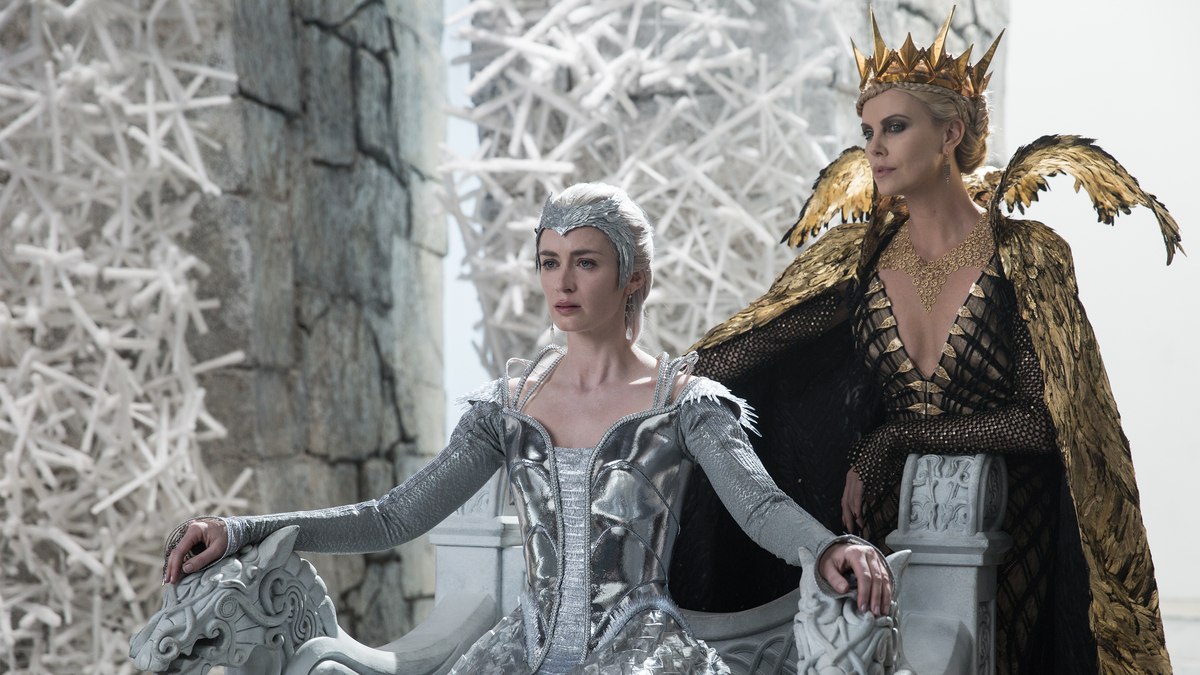 A Snow White tale without Snow White is like an apple without its core. Yet here we are, four years after the minor financial success of the Kristen Stewart-led Snow White and the Huntsman, gazing into the mirror without the dark-haired beauty. The first film had somewhat grand ambitions in trying to reclaim Disneyfied fairy tales for older Grimm fans. But this sequel has a different motivation, one which becomes apparent as soon as Emily Blunt unleashes ice from her lungs and dons a wardrobe of bright blue scaly dresses.

Yes, The Huntsman: Winter's War is here for the Frozen assets that have suddenly made Hans Christian Andersen's two-century-old tale The Snow Queen look like very lucrative property. In their bid to ape a rival's success, Universal Studios seems to have chosen the closest available wicked queen with whom they could defrost this new mythology. Thus, Charlize Theron's gold-plated evil empress Ravenna now has a sister in Blunt's fragile ice Midas, Queen Freya. In the film's opening third, set before the events of the first movie, Freya discovers her cold hands after a personal tragedy and flees to a kingdom in the North.

If the phrase "kingdom in the North" conjures up images of a certain Wall, perhaps one guarded by a ragtag team of warriors with shifting allegiances, rest assured this movie knows something of that parallel, just as it's aware of the other one. The desire to prompt a Pavlovian response from Game of Thrones fans extends even to the casting of a leather-bound Jessica Chastain as "Sara," a fiery redhead warrior who's gifted with a bow and enjoys making love in the hot springs. Like the other soldiers in Freya's huntsmen army, Sara was an orphan trained from childhood to serve the queen, though the film provides zero sense of what life was like growing up in a year-round winter boot camp. (Did they ever get sick of snowball fights?)

Chastain is a powerhouse of an actress, and she's brought added depth to supernatural roles when called to, as in her terrifying performance in last year's Crimson Peak. But how many ways are there to play a character, fairy-tale or not, who's written as an unlicensed copy? About all she can do is break Freya's one ironclad rule of the North: No one is permitted to love. When Sara falls for the strapping Eric (a returning Chris Hemsworth, still charming and rugged and wielding an axe as though it were a certain hammer), there's frozen-over hell to pay.

We are then thrust forward in the timeline seven years, so that Eric can go on the hunt for Freya and reconnect with his one true love after all that other Snow White stuff has happened to him. He gets assistance once again from the local dwarf population, with Nick Frost making a return alongside three new faces, all superimposed onto smaller bodies for our mild amusement. The script, by two credited writers, bears all the hallmarks of a rush job, especially when you take a gander at co-headliner Ravenna and realize she serves no narrative purpose (which might be why Theron has so little screentime that she hardly gets to snarl).

First-time feature director Cedric Nicolas-Troyan was a special effects supervisor on the first Huntsman film, yet there's no visual splendor to be found in the kingdom this go-around. At one point Eric's party gets menaced by some brown goblins who look like they're fresh from a mud bath. At least Nicolas-Troyan doesn't try to cover up the film's lack of Stewart: We see "Snow White" once, from the back, and the rest of the time she is only alluded to in passing, since it is still technically her reign. It's too bad: someone with the name "Snow" would probably get along swimmingly with the Snow Queen.

There would be use for a properly dark Frozen retelling, more in line with the original tale, where the afflicted actually uses her power for malfeasance. But Freya is a snow day late and a dollar short. By the time we learn just how deep her abilities run, it's too late to do anything with them. Her lack of true gumption in a land of supposedly unhinged magic people prompts another question: What's the point of all the blood, sexy costumes and PG-13 sensuality when the theme of the movie (Love Conquers All) is so childish? If you're going to murder a baby in the first act and hint at the possibility of actual black magic at work, to then handle the rest of the narrative with the same kid gloves as the cartoons do is insulting — and the Thrones comparison this film wants to prompt looks even more embarrassing.

Heck, the Frozen comparison is embarrassing, too. At least that version knew it was for children.