Accessibility links
Is Donald Trump A Modern-Day George Wallace? Fueled by voter anger at a changing America, 50 years ago a pugnacious governor from Alabama made waves and got a lot of votes. Today, Wallace allies and family see Trump walking a similar path. Presidential candidate George Wallace reaches out for the hands of his supporters at the Texas State Convention of his American Independent Party, Dallas, Sept. 17, 1968. PhotoQuest/Getty Images hide caption 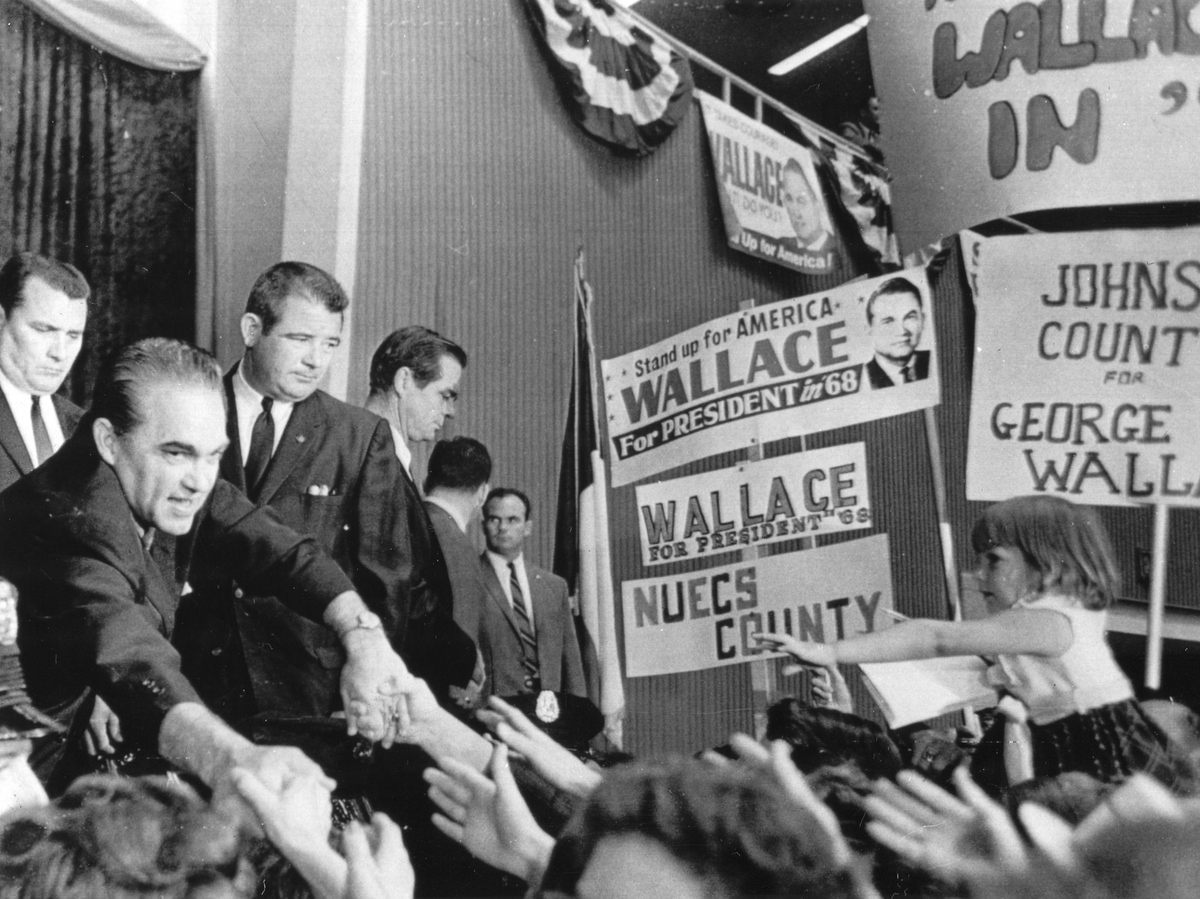 Presidential candidate George Wallace reaches out for the hands of his supporters at the Texas State Convention of his American Independent Party, Dallas, Sept. 17, 1968.

Donald Trump's enduring appeal in the Republican presidential contest has the GOP in a quandary, as it's forced to contend with voters fed up with party politics.

Some 50 years ago, another vociferous candidate put the scare in traditional power brokers. George Wallace fired up crowds with a similar anti-establishment message, and drew protests as passionate as are being seen at Trump's rallies today. Wallace also became a face of racial tension in America as the leading symbol for segregation in the 1960s.

"I want to tell these national parties this — they're going to find out there are a lot of rednecks come Nov. 5th in this country."

Former Alabama Gov. George Wallace on the campaign trail in 1968

When Wallace entered presidential politics in 1964, the then-Alabama governor was famous for declaring, "Segregation now. Segregation tomorrow. And segregation forever."

"It's just a replay," Charlie Snider, one of Wallace's most trusted political aides, told NPR. "We're looking at a modern-day George Wallace."

Snider is a Trump supporter. Wallace's daughter, a Democrat, hears it, too, but in a different way.

"Trump and my father say out loud what people are thinking but don't have the courage to say," Peggy Wallace Kennedy told NPR. Wallace Kennedy was 18 when she was on the campaign trail with her father in 1968. She believes Trump is exploiting voters' worst instincts, the way her late father once did.

"They both were able to adopt the notion that fear and hate are the two greatest motivators of voters that feel alienated from government," she said. 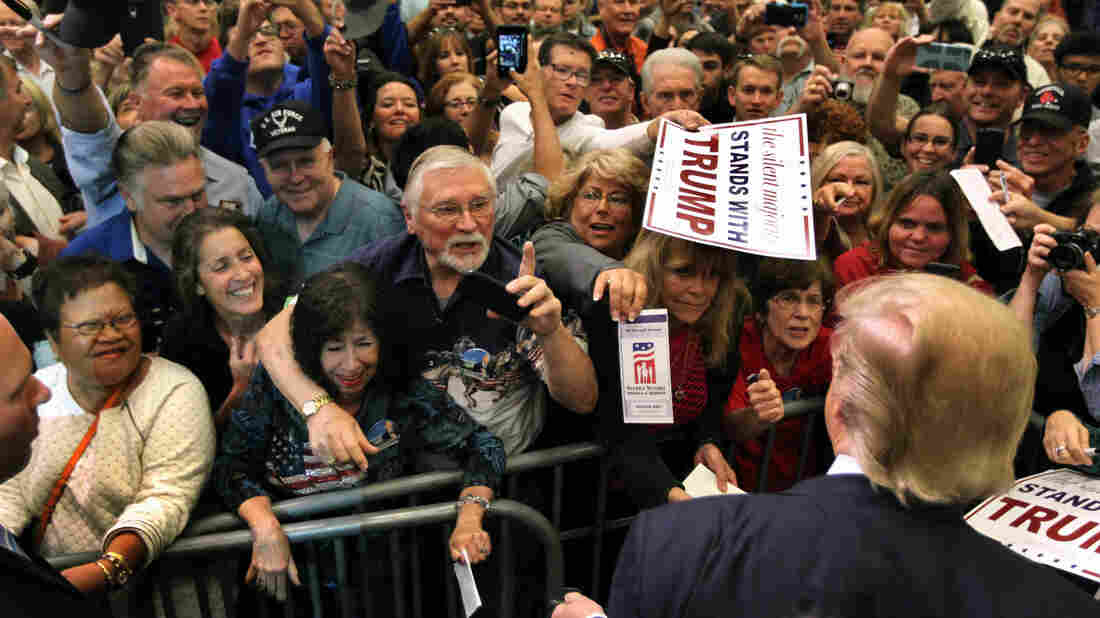 Donald Trump stops as supporters reach out for him to sign autographs during an October rally in Nevada. Lance Iversen/AP hide caption 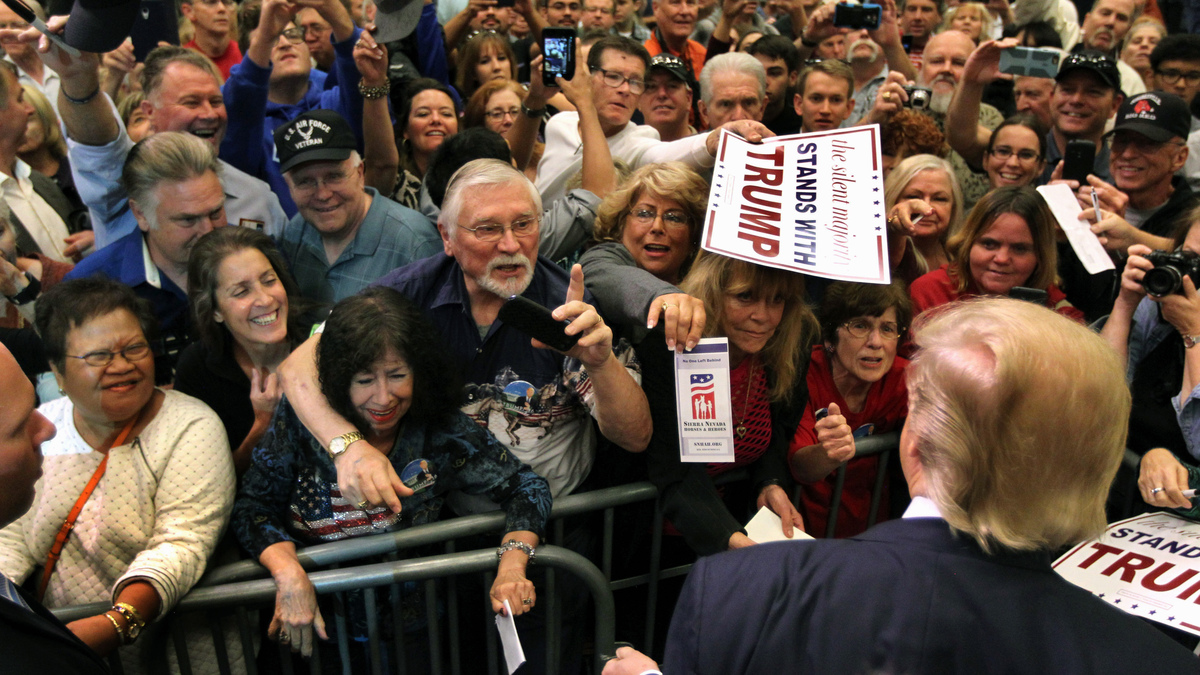 Donald Trump stops as supporters reach out for him to sign autographs during an October rally in Nevada.

The Trump campaign has not responded to NPR's request for comment on the comparison.

Tapping a vein of resentment

Wallace — the Southern populist and former Golden Gloves boxing champ — burst onto the national stage, tapping into a vein of resentment over the social upheaval of the day — namely new civil-rights laws. 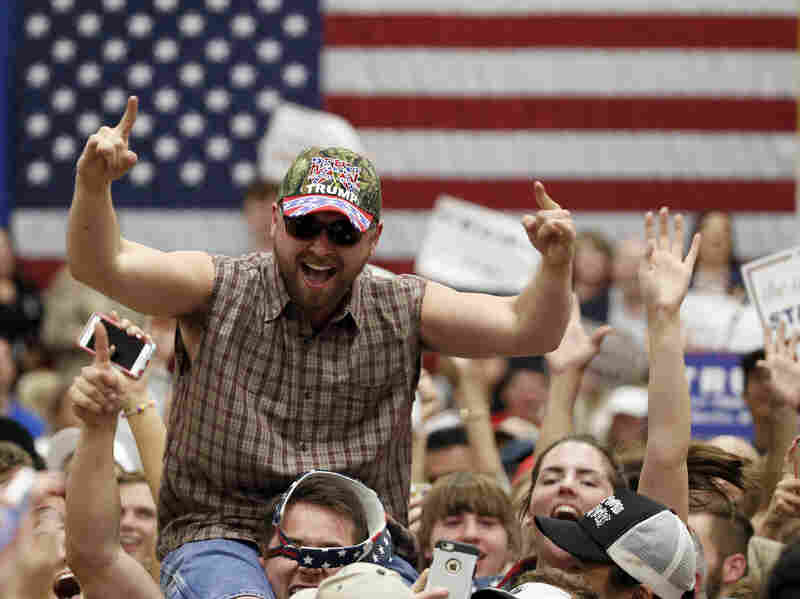 A supporter cheers with the crowd before Donald Trump speaks at a campaign event in Berlin, Md., on Wednesday. Alex Brandon/AP hide caption 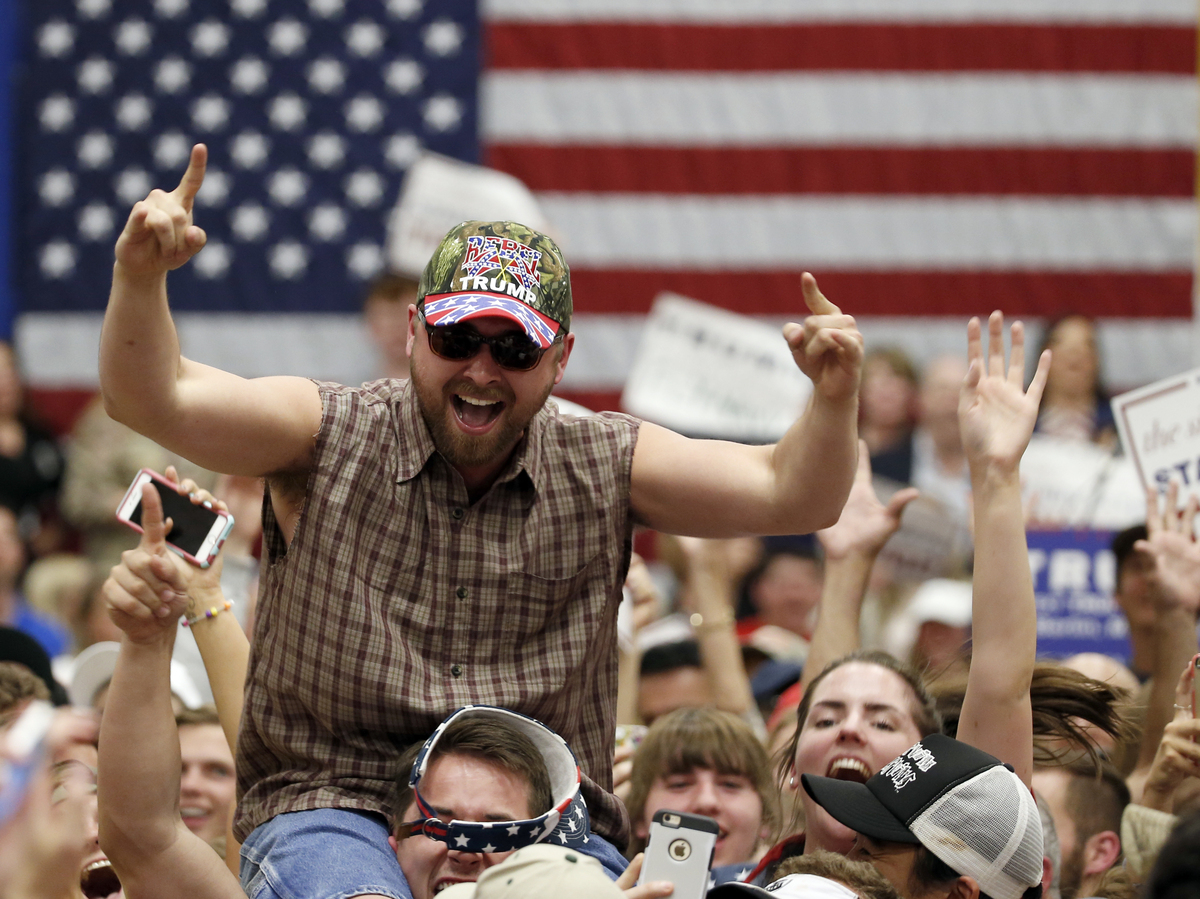 A supporter cheers with the crowd before Donald Trump speaks at a campaign event in Berlin, Md., on Wednesday.

In 1968, running as a third-party candidate, he drew large crowds to ever-more raucous rallies.

"We want Wallace! We want Wallace!" supporters would chant, as he took the stage at elaborate rallies that typically featured live country music acts.

Tens of thousands turned out in major Northeastern cities like Boston and New York. Wallace's racial rhetoric on this national stage was more coded. He berated both the federal government and the national political parties for being out of touch with average Americans.

"I want to tell these national parties this — they're going to find out there are a lot of rednecks come Nov. 5th in this country," Wallace said to a shouting crowd in 1968. "They've been used as a doormat long enough."

"The U.S. has become a dumping ground for everybody else's problems," Trump declared when he announced he was running for president.

Snider, now 84, was chairman of two of Wallace's four presidential campaigns. Snider has been watching this year's race with great interest. 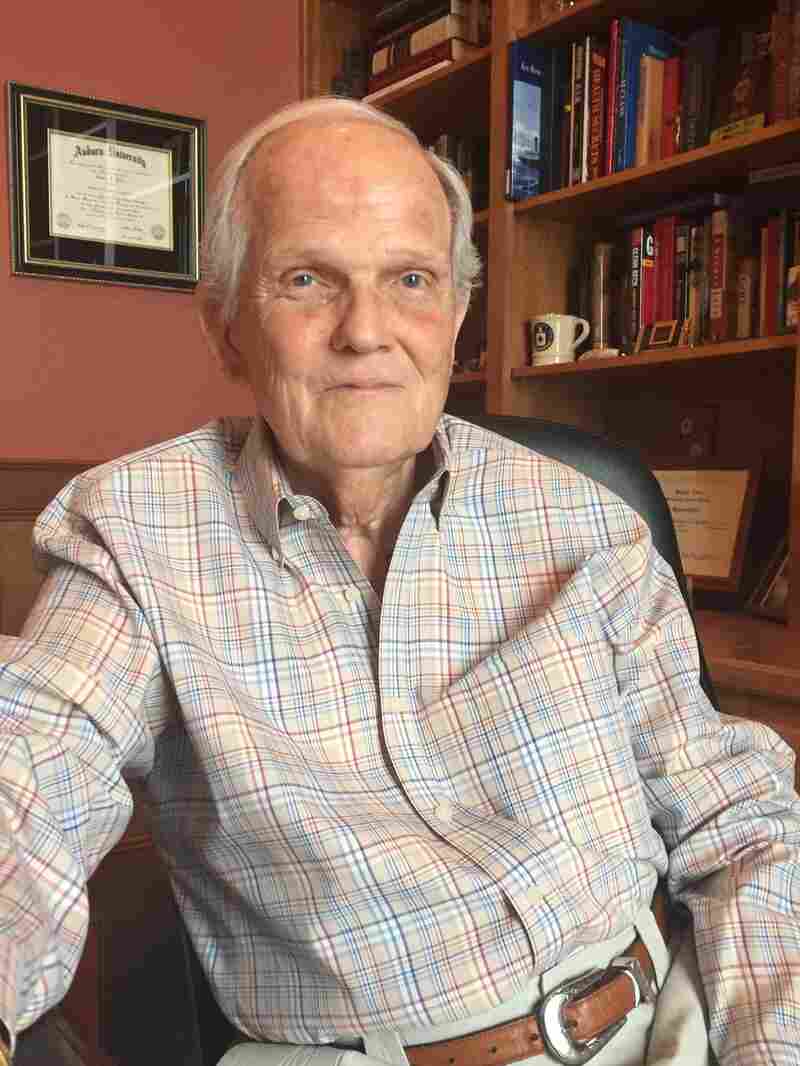 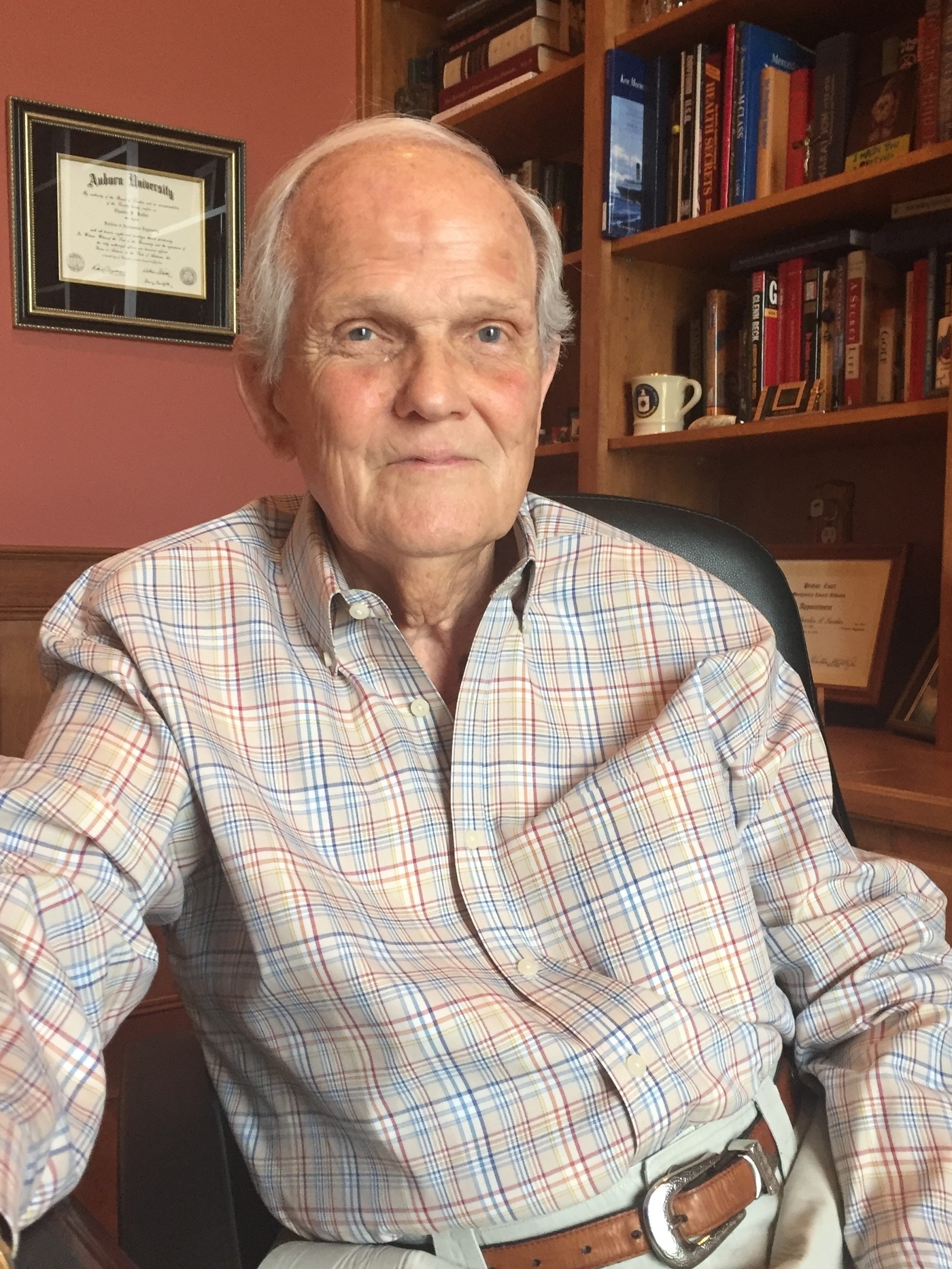 Charlie Snider, one of Gov. Wallace's most trusted political aides, at home in 2016.

Wallace ran as a Democrat in 1972 and again in 1976. (During the '72 campaign, he was shot and wounded in an assassination attempt that left him paralyzed and in a wheelchair.)

Snider said watching the protesters at Trump rallies today reminds him of being on the campaign trail with Wallace. In an era of anti-war and civil-rights activism, there were always protesters in the audience.

"George kinda liked that 'cause he would badger with them," Snider said.

He said Wallace would make fun of men with long hair — or joke about them wearing sandals in the cold weather. "He kindly enjoyed it," Snider said.

Wallace, Settin' the Woods On Fire from CNAM on Vimeo.

In another scene, he shouts, "Why don't you young punks get out of the auditorium?" as the crowd jeers at demonstrators.

In this year's Republican race, Trump has made throwing out disruptive hecklers part of his stump.

"Ready? Are you ready?" he asked a crowd in Iowa City, Iowa. His supporters cheered wildly. "Get 'em outta here! Get the hell outta here!" Trump yelled, as security guards took away the protesters. 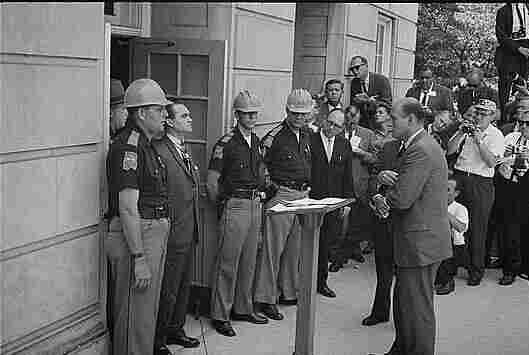 Trump is no racial segregationist, but there has been race-based controversy

While their combative styles mirror one another, Trump is no racial segregationist.

But Trump has also become embroiled in controversy over race. In his announcement speech, he said undocumented Mexican immigration was bringing drugs and "rapists." And he has called for a temporary ban on noncitizen Muslims entering the U.S. Those have become lightning rods in much the way Wallace's positions did in the 1960s.

"Donald J. Trump is calling for a total and complete shutdown of Muslims entering the United States until our country's representatives can figure out what the hell is going on," he said in South Carolina after the terrorist attacks in Paris late last year.

The Alabama governor's daughter, Wallace Kennedy, is a retired schoolteacher who now advocates for the very voting rights her father once fought. She's critical of the Trump campaign and says she even hears an echo of her father's campaign slogans in Trump's. They appeal to voters who think the country, as they know it, is slipping away, she said.

"My father would say, 'The federal government is not going to tell me what to do, so we're going to stand up for ourselves,' " Wallace Kennedy said. "His theme was 'Stand up for America.' Donald Trump's theme is let's 'Make America Great Again.' " 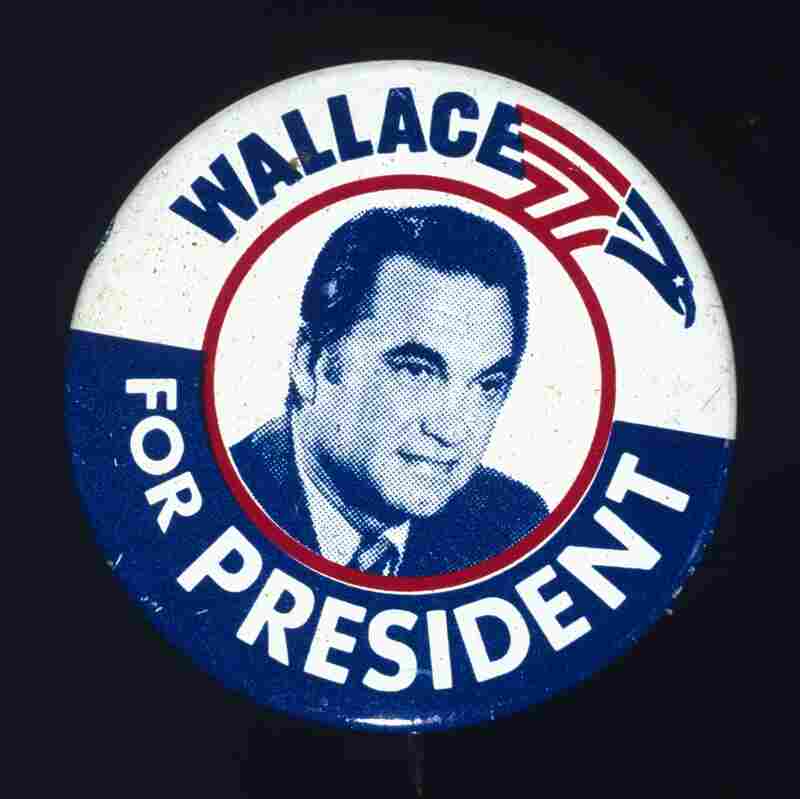 Their appeal has nothing to do with political ideology, according to historian Dan Carter, author of The Politics of Rage: George Wallace, the Origins of the New Conservatism, and the Transformation of American Politics.

"This is about style," he said. "It's about impressions. It's about a vague taking charge."

Now professor emeritus at the University of South Carolina, Carter said both Trump and Wallace come across as fighters to voters who believe the country is on the wrong track.

"There are a lot of people who essentially want the world to stop and want it to stop changing," Carter said. "And when that happens, you look for a strong individual. And to me that's the big appeal and the big similarity between George Wallace and Donald Trump."

Tension on the campaign trail — with protesters and the media

Incidents of violence at rallies are another common theme. Just as Trump supporters have turned on protesters in the crowd, Wallace rallies were known to get physical.

On CBS Evening News in October of 1968, correspondent David Dick reported from a Detroit rally, where a fight broke out between hecklers and Wallace supporters.

"The tension was so great, emotions so high, there was an inevitable melee," Dick reported. "Fistfights, chairs for weapons, and sticks — both improvised and official."

Former Alabama Secretary of State Jim Bennett was a reporter with the Birmingham Post-Herald at the time and covered the Wallace presidential rallies.

Bennett wrote a column on the similarities he sees between Trump's approach and Wallace's campaign style — for instance, the way they target the media.

"Wallace used to point out the press that was there," Bennett said. "And sometimes that didn't go over so well with some of these crowds, either."

Wallace said at a Florida rally in 1968: "The average citizen in this county has more intelligence and sense in his little finger than the editor of The New York Times has in his whole head."

Trump is no fan, either: "The press is really bad," he has said. And he's taken to calling the newspaper "the failing New York Times."

At a rally in Indianapolis on Wednesday, Trump revved up the crowd against the press, calling the media "the most dishonest people in the world."

"Do we like the media?" he asked the crowd.

"No!" rose up from the audience.

"Do we hate the media?" he asked, raising his hands up to cue the crowd.

There's another similarity between Wallace and Trump, too. Like Wallace, Trump may spar with the press, but he also tends to be the candidate who gets the most media attention.