Accessibility links
For Oldest Armenians, A Glimpse Of A Homeland Lost But Not Forgotten Based on the memories of Armenian centenarians who survived the 1915 genocide as children, Armenian-American photographer Diana Markosian traveled to Turkey to bring them images from their past.

Wearing a black coat and holding a cane in his right hand, Movses Haneshyan stands in front of a life-size canvas. He stares at a winding road, a fir tree, distant mountains and a deep blue sky. He approaches the image slowly, and begins to cry, "My home. My Armenia."

Haneshyan says he last saw his home a century ago. As a 5-year-old, he was forced to flee during what Armenians call Medz Yeghern, the "Great Crime" of 1915 — the systematic murder by Ottoman Turks of Armenian people in their historic homeland, which now lies in modern-day Turkey. The total number killed has been estimated at between 800,000 and 1.5 million. To date, more than 20 countries have officially recognized the killings as genocide, but Turkey is not one of them. 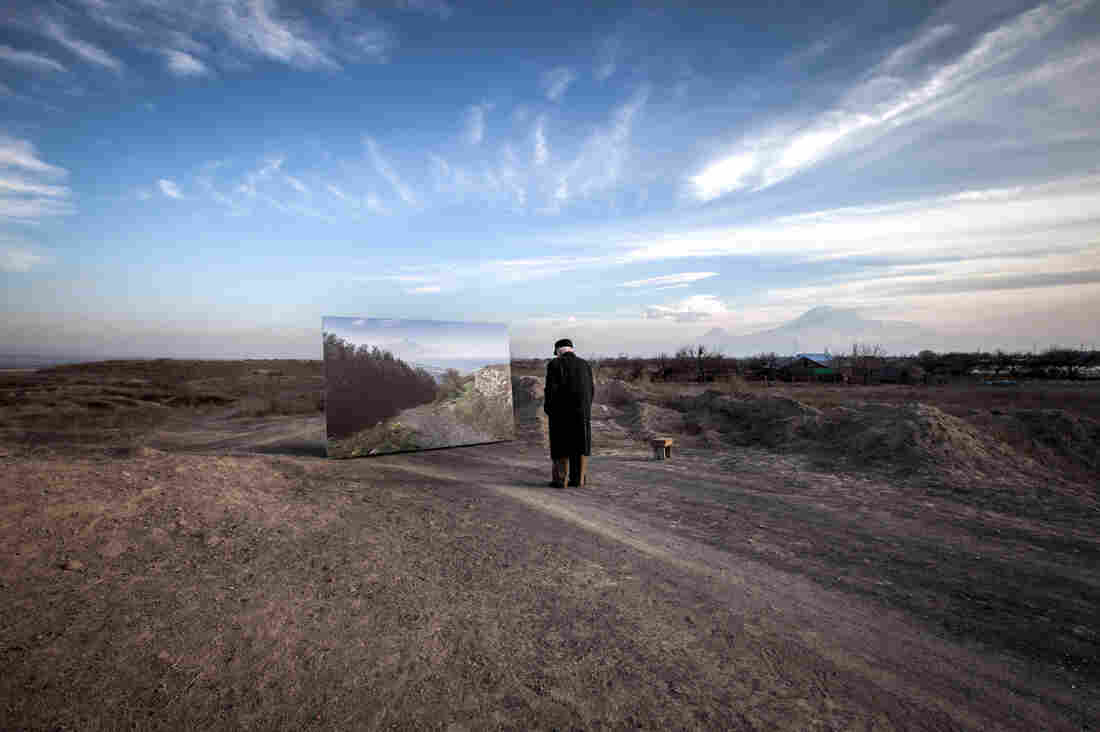 "My home," exclaims Movses Haneshyan, on seeing the enlarged image presented to him by photographer Diana Markosian. He'd fled with his father at age 5. Diana Markosian hide caption 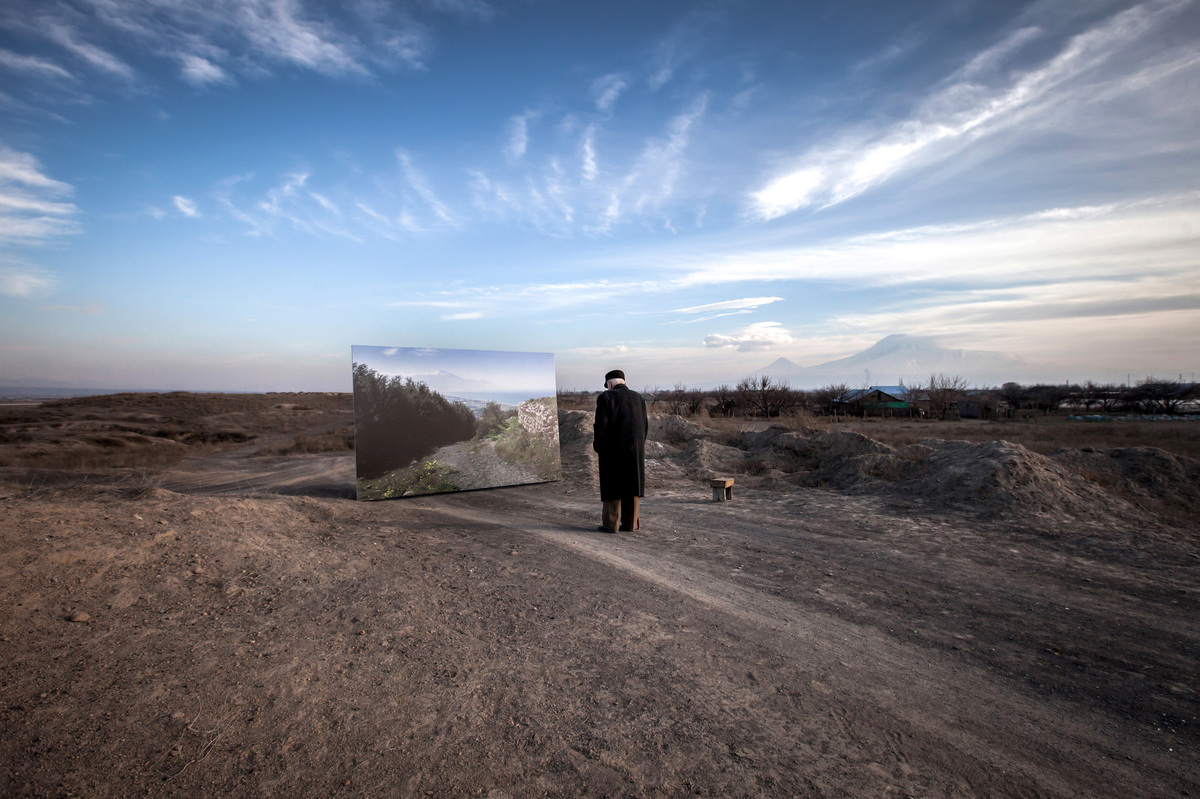 "My home," exclaims Movses Haneshyan, on seeing the enlarged image presented to him by photographer Diana Markosian. He'd fled with his father at age 5.

Today, more Armenians live outside their country than inside. I am one of them. I was born in Moscow to Armenian parents, and was raised in California. For most of my life, I struggled with my Armenian identity, partly because of the history I inherited. I was separated from my father as a child, while he stayed back in Armenia. It took me 15 years to make the journey back to Armenia to find him. I was 23.

A year ago, I began to research the remaining survivors of the genocide as part of an IDeA Foundation-commissioned project. I took on this project because I wanted to connect. I wanted to learn about the history in a deeper way. Ages can be hard to confirm, but I perused Armenian voter registrations online to see who was born before 1915, and then traveled across Armenia to find them.

I met 10 survivors along the way. Among them were Movses Haneshyan, Yepraksia Gevorgyan and Mariam Sahakyan— who all, according to those records, have lived past their hundredth year.

All three fled the now-Turkish territory with their families after the mass killings. None ever returned. The stories they told me were traumatic — from the violence each lived through as a child to the lengths their parents went to get them out safely. 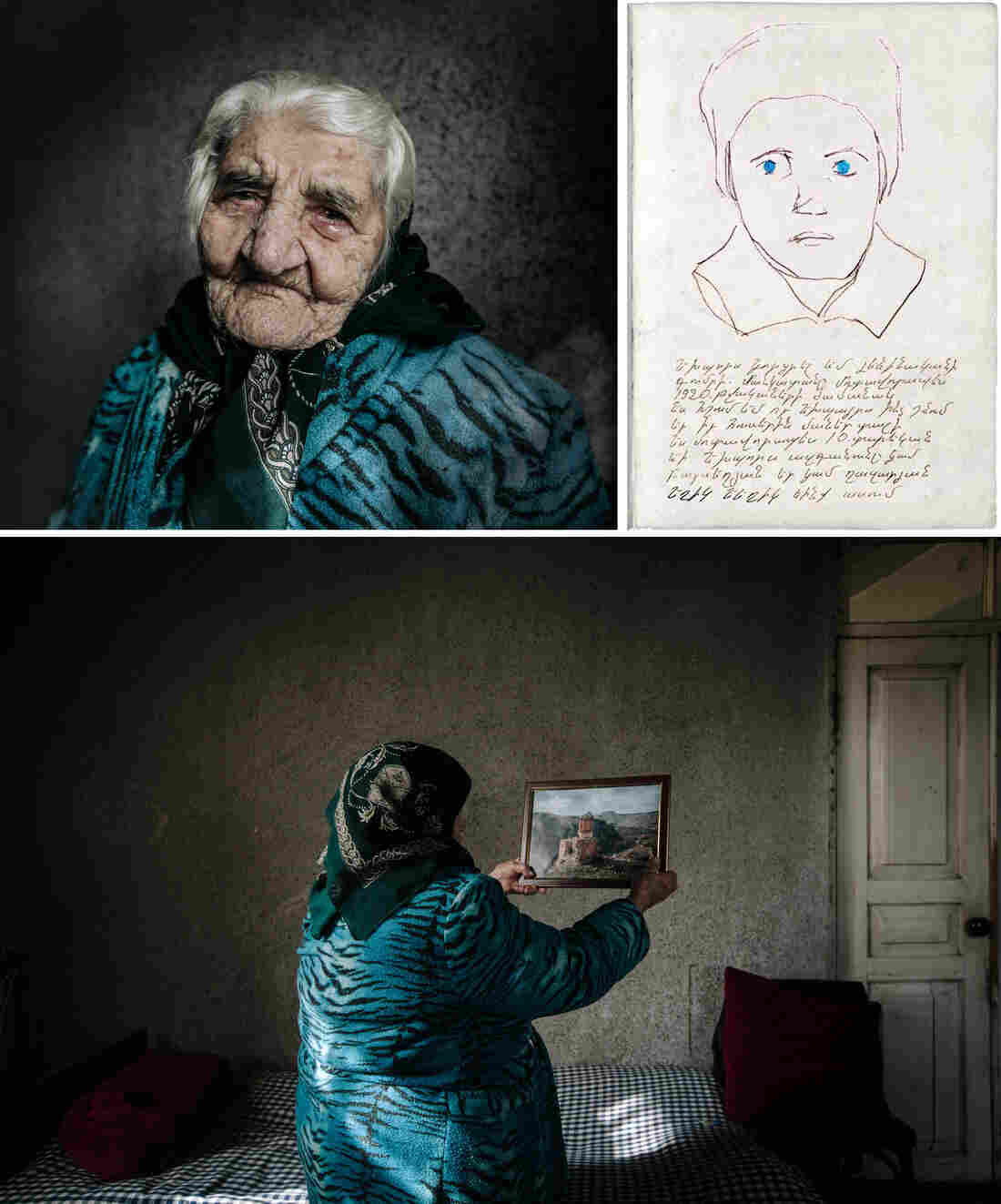 Yepraksia Gevorgyan holds an image of the location where she recalls escaping with her family. She was separated from her brother. "His name is Yeghia Ghazarian," she says. "I was 10 when I last saw him. He liked to put me on his shoulders and play with me at the orphanage. I don't remember much else about him except he has blue eyes, like mine." Her grandson drew the portrait sketch (top right). Diana Markosian hide caption

Gevorgyan, now 108, escaped by crossing the Araks River to what is present-day Armenia. She described seeing Turks kill her father, throwing him into the water, which she described as "red, full of blood."

Sahakyan, 102, was taken into a Kurdish family home, where her family members became servants. She and her relatives later escaped to Syria. She recalls her mother telling stories of how the family hid in grass and walked at night for three days to flee Ottoman soldiers. 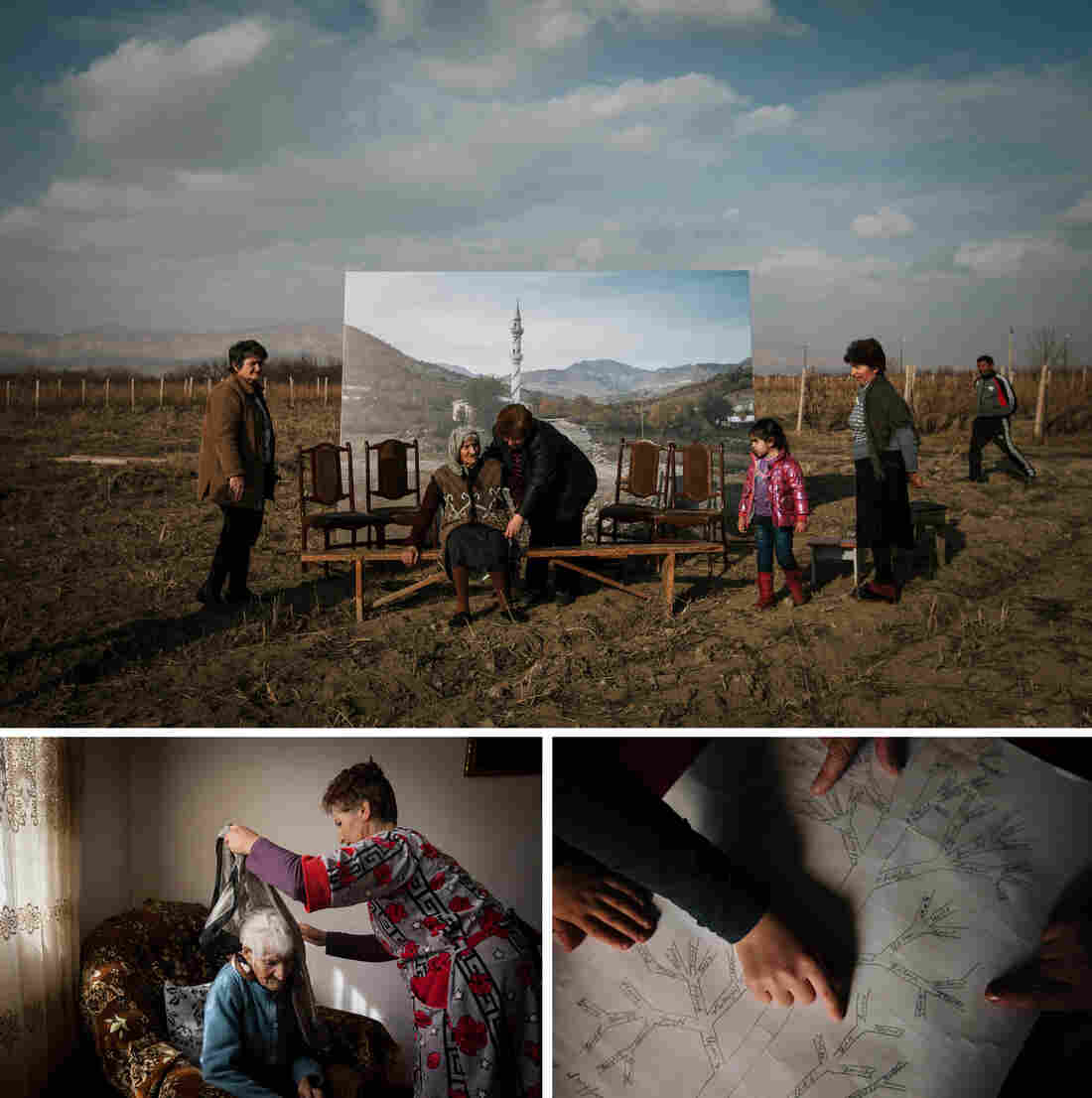 Mariam Sahakyan, 102, recalls her mother telling how the family hid in grass and fled soldiers at night. They were taken into a Kurdish family home, where they became servants, and later escaped to Syria. The Sahakyan family tree (bottom right) depicts four generations dating back to 1915. Today's generations pose (top) with Sahakyan. Daughter-in-law Hasmik (bottom left) serves as her caregiver. Diana Markosian hide caption

Her memories have now been passed down to her two sons, who are proud that their family comes from Sason, a region in southeastern Turkey that holds particular historical significance for Armenians. It's the setting for an Armenian national epic from the 8th to 10th centuries and it tells how Armenian fighters, led by a legendary ruler named David Sason, repulsed repeated Arab invasions.

When I met them, it had been nearly a century since the survivors had seen their home. I wanted in some way to reunite them with their homeland. Based on the childhood memories they shared with me, I traveled to Turkey, took an image of what remained and brought it back to them.

When I told the survivors I would be going back, each one asked me to fulfill a wish.

With relatives' help, Movses Haneshyan, 106, drew a map of his village for photographer Diana Markosian and asked her to find his old church. Diana Markosian hide caption

Movses Haneshyan drew a map of his village and asked me to find his church and leave his portrait on the footsteps of what are now ruins.

Yepraksia Gevorgyan asked me to help her find her older brother, from whom she was separated after 1915.

Mariam Sahakyan requested that I bring back soil for her to be buried in. 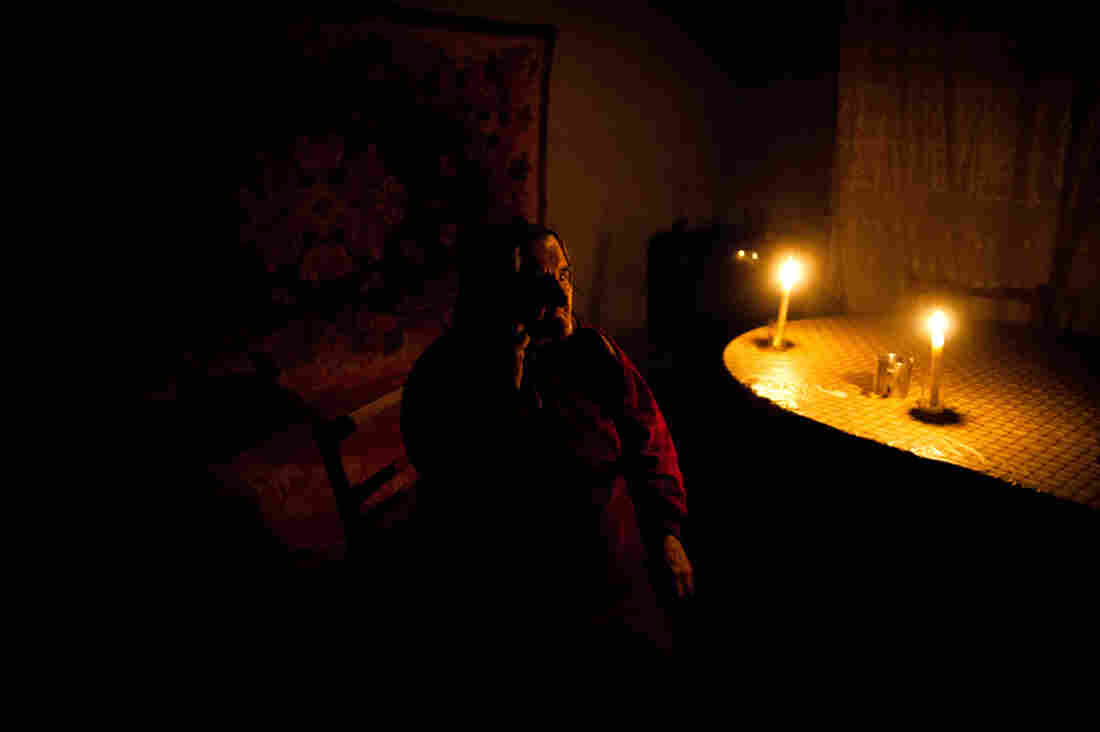 I never found Gevorgyan's brother. But I returned with a story for Haneshyan, and a container of dirt for Sahakyan. When she opened it, she touched the land and thanked me. "You've brought the smell of my village to me," she said.