Accessibility links
After Very Visible Roles, Lupita Nyong'o Looks To Disappear Into Character The actor is now starring on Broadway in Eclipsed, a searing story of young women held captive in Liberia. After that and 12 Years a Slave, Nyong'o says she's ready for some lighter material. 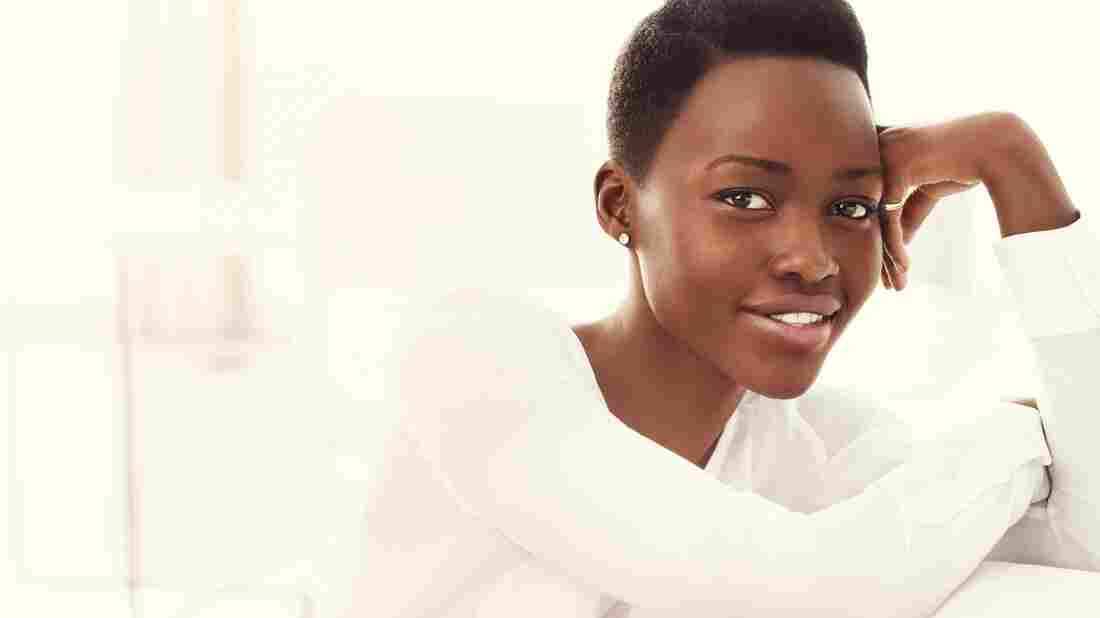 Lupita Nyong'o says it was "a very discombobulating thing," to go from obscurity to the Academy Awards. Alex Lubomirski/Lancôme hide caption 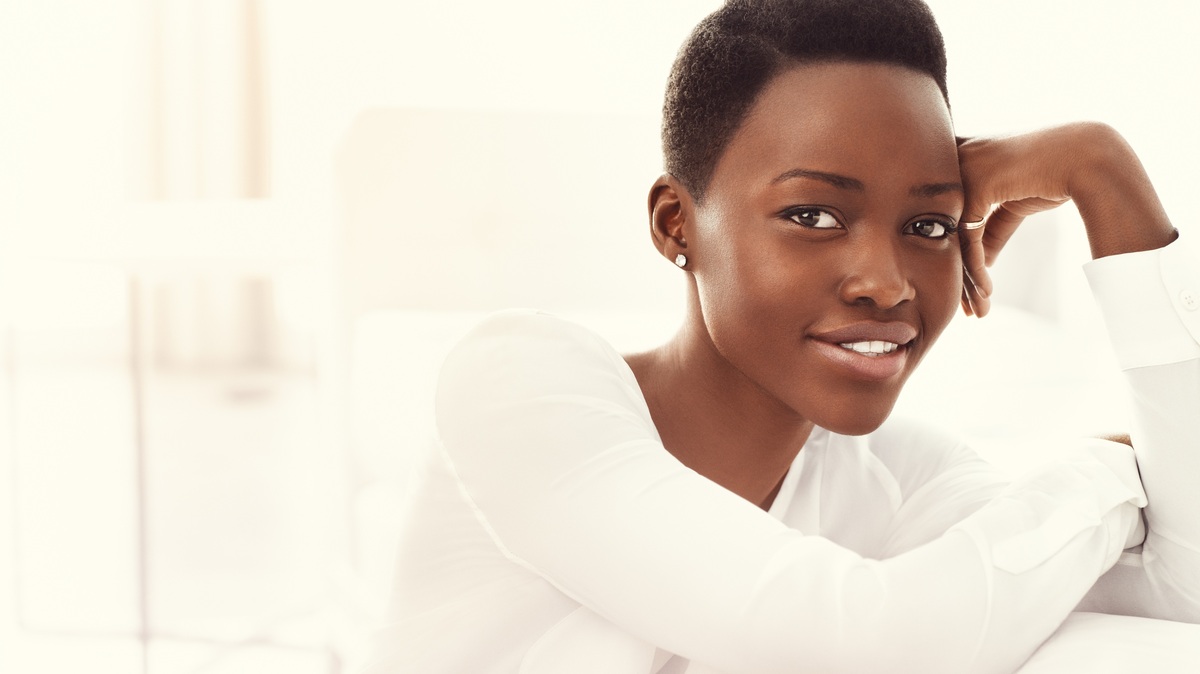 Lupita Nyong'o says it was "a very discombobulating thing," to go from obscurity to the Academy Awards.

Lupita Nyong'o lives in a sunny apartment high above the East River in Brooklyn. Black-and-white photos of African wildlife hang on orange accent walls, near a collection of pretty blue pottery. The actress just earned rave reviews for her Broadway debut, in the play Eclipsed. She's also featured in the biggest movie in theaters now, The Jungle Book. It's possible you heard about her last little film: Star Wars: The Force Awakens.

Nyong'o was born in Mexico City; her Kenyan parents were teaching university there. She grew up in Nairobi, studied drama at Yale and won an Oscar for her first film, 12 Years A Slave, the very day after her 31st birthday.

"It was a very discombobulating thing, to go from being completely unknown to winning an Academy Award," N'yongo says frankly. She's wearing a daisy-printed black dress, curled up barefoot on her couch. (Guests are politely requested to remove their shoes upon entering her apartment.)

Why Lupita Nyong'o's 'People' Cover Is So Significant

When Nyong'o accepted her Best Supporting Actress Oscar, she thanked the real person her character was based upon, from Solomon Northup's memoir, Twelve Years A Slave, published in 1853. Patsey, an enslaved young woman, endured horrific violence and endless labor in the cotton fields of Louisiana.

"It doesn't escape me for one moment that so much joy in my life is thanks to so much pain in someone else's," she said in her speech to the Academy, composed and compassionate, her dark skin set off by a blue pastel Prada gown.

That 2014 appearance helped make Nyong'o a celebrated beauty. She appeared on a raft of magazine covers, including People's Most Beautiful issue, and was named a face of Lancôme. But that kind of attention ended up giving Nyong'o pause.

"12 Years A Slave is a lot about the economy of Patsey's body," she observed. "And then, also, the exposure the film gave me was a lot about my body."

So it's not entirely by accident that you don't see Lupita Nyong'o's body or her lovely face in the two giant movies she starred in right after 12 Years A Slave. In The Jungle Book, she's a voice. In Star Wars: The Force Awakens, she's an alien, altered entirely by CGI. I wondered if that was because of Hollywood's limited starring roles for women who look like her. Nyong'o said no.

"I think subconsciously I was excited by work ... that was not about my body," she says. In fact, she says, playing a thousand year old creature in Star Wars was something of a relief. "It wasn't about my skin or my body or its economy, whether we're talking about slavery or we're talking about fashion or about celebrity," she says. "When Star Wars came about, it excited me because I got to get back to acting in a way that was free of that body, and I got to inhabit a different body."

Plus, obviously, it was Star Wars. Similarly, in The Jungle Book Nyong'o got to experiment with voice acting in a classic Disney remake, as the main character's adoptive wolf mother. "I like to disappear into character," she says, smiling. "I like to let go of my ego and just work on material. I like to be in service of character." 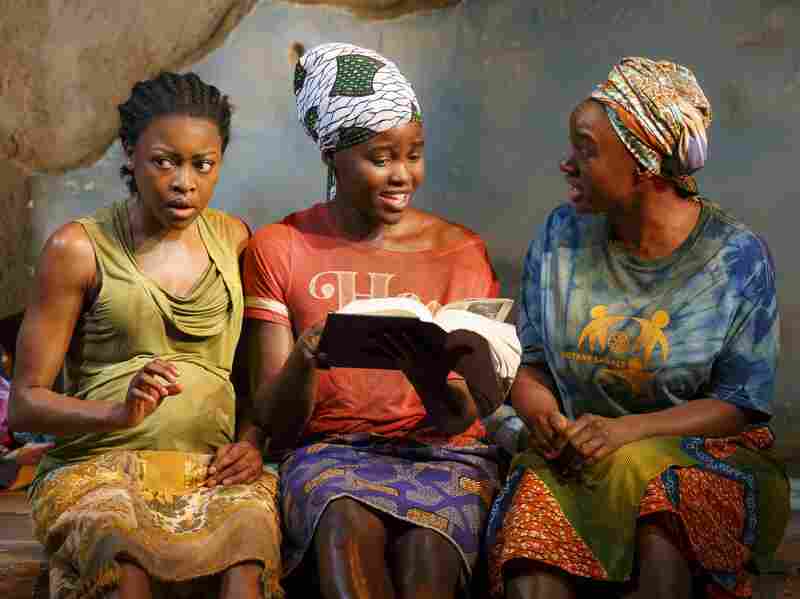 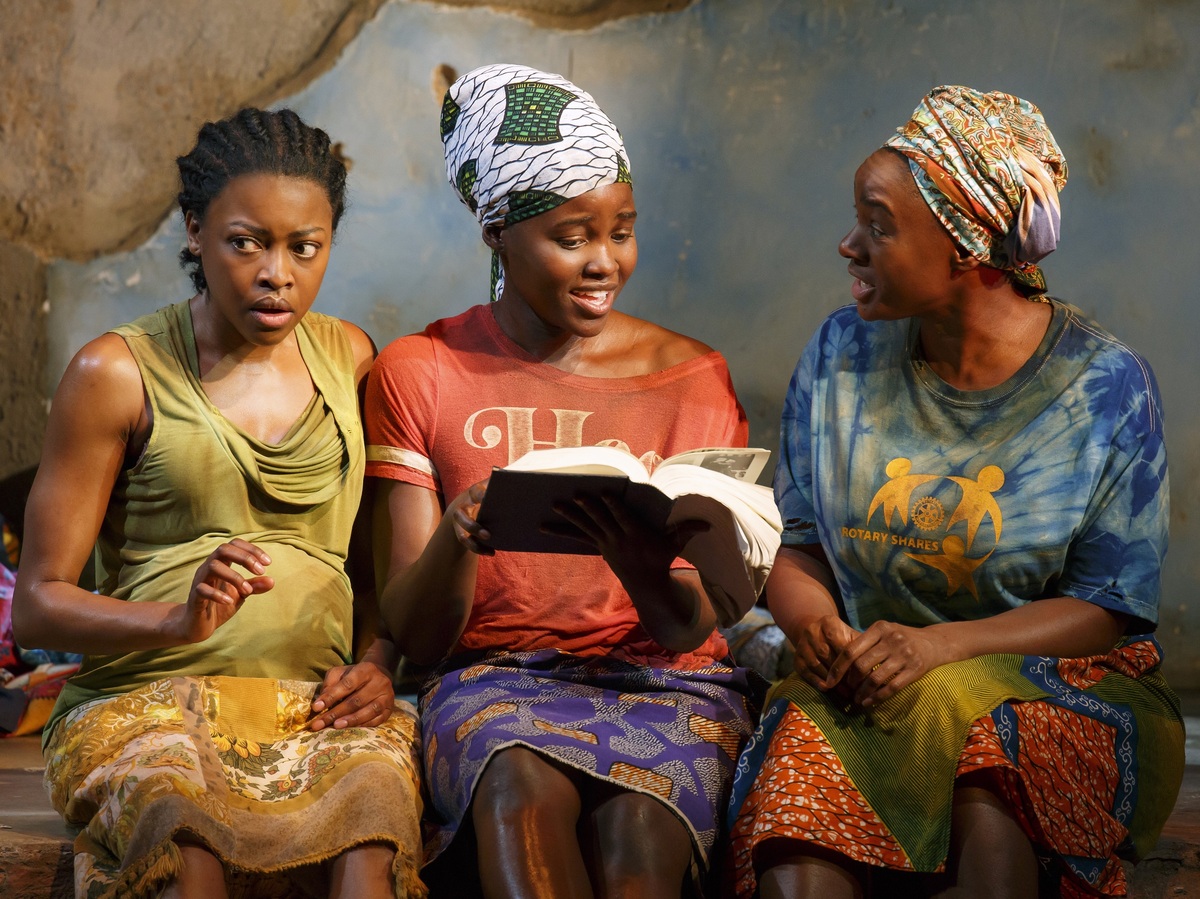 Pascale Armand, Lupita Nyong'o and Saycon Sengbloh in a scene from Eclipsed, now on Broadway.

That's also why Lupita Nyong'o has returned to her roots as a stage actress. At Yale, she served as an understudy for Eclipsed, a play set among captured women during the second civil war in Liberia. It never left her. She used her fame to bring Eclipsed to Broadway, and stars in it as well.

"Ms. Nyong'o, simply superb, illuminates her character's conflicted feelings with pinpoint clarity," raved Charles Isherwood, chief drama critic of The New York Times in March, when the play opened. He went on to call Nyong'o "one of the most radiant young actors to be seen on Broadway in recent seasons."

Isherwood told NPR that the movie stars he sees on Broadway usually pick commercially-friendly revivals, not challenging, contemporary dramas. "To see a young actor bringing a play like this to Broadway is really frankly not something I've seen before," he said. "It's unprecedented, I think."
So what are Nyong'o's plans after Eclipsed closes in mid June?

"I really, really need to do a comedy," Nyong'o laughs.

Lupita Nyong'o's next movie is not a comedy, but it's already in the can. The Queen of Katwe comes out in September, also from Disney and directed by Mira Nair. It's another true story: Nyong'o will play the mother of a teenaged female Ugandan chess champion.