Accessibility links
Timbuktu's 'Badass Librarians': Checking Out Books Under Al-Qaida's Nose Librarian Abdel Kader Haidara organized a smuggling operation to keep centuries-old manuscripts out of the hands of al-Qaida. Joshua Hammer wrote about it in The Bad-Ass Librarians of Timbuktu. 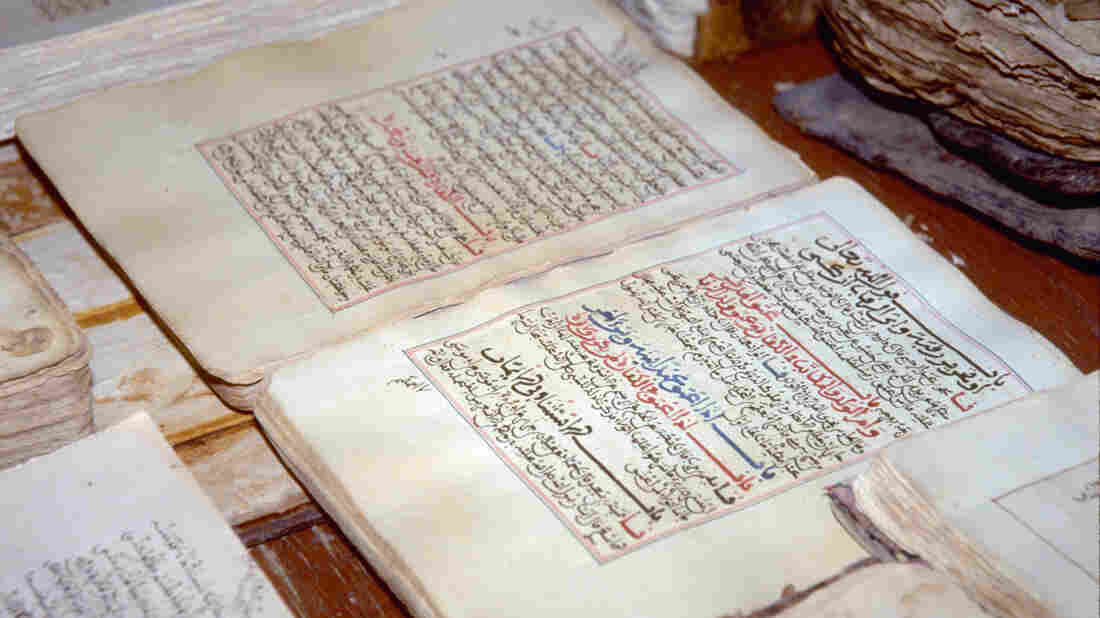 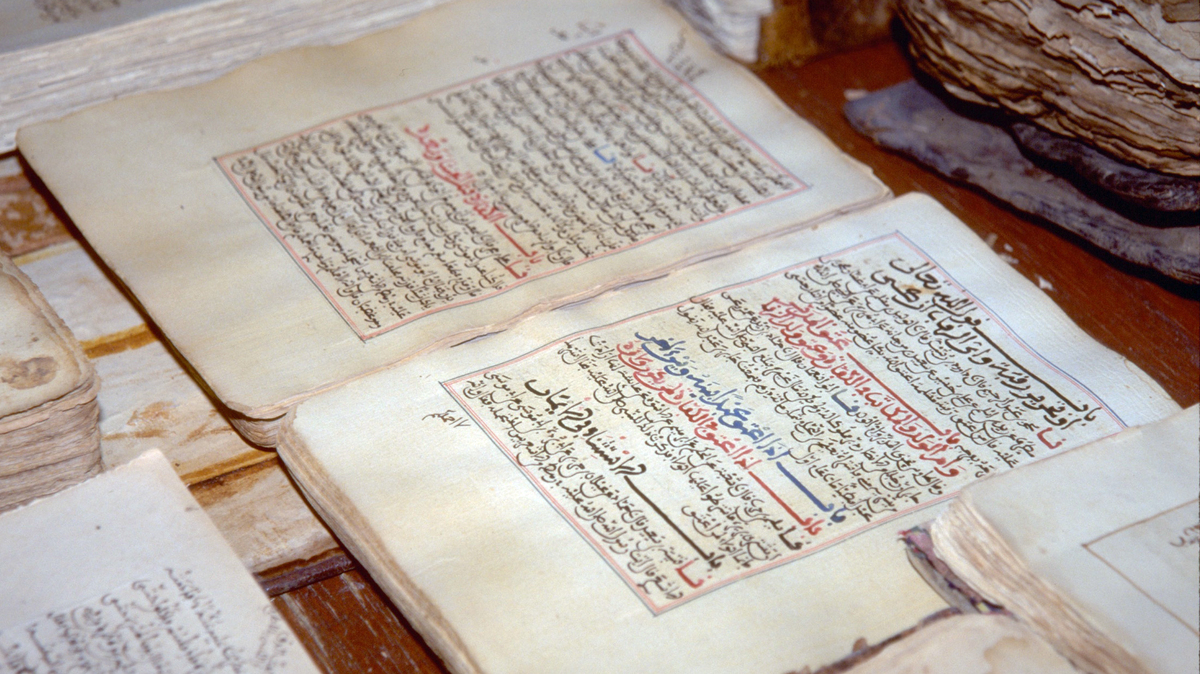 Handout picture dated 1997 and released in 2012 by the UN shows ancient manuscripts displayed at the library in the city of Timbuktu. Al-Qaeda has destroyed ancient texts it considers idolatrous.

For hundreds of years, Timbuktu has had a place in the world's imagination. Located on the southern edge of the Sahara desert, the city flourished as a center of Islamic culture and scholarship in the 13th through 16th centuries. It was placed on the UNESCO World Heritage List in 1988, recognized for the University of Sankore, which had as many as 25,000 students who studied the Quran, as well as the historic Djingareyber and Sidi Yahia mosques. 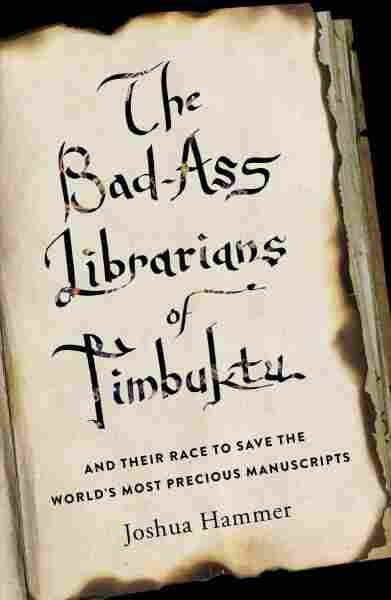 The Bad-Ass Librarians of Timbuktu

And Their Race to Save the World's Most Precious Manuscripts

Timbuktu was a center of the manuscript trade, with traders bringing Islamic texts from all over the Muslim world. Despite occupations and invasions of all kinds since then, scholars managed to preserve and even restore hundreds of thousands of manuscripts dating from the 13th century.

But that changed when militant Islamists backed by al-Qaida arrived in 2012. The hardline Islamists didn't see these texts as part of their Islamic heritage, but as idolatry, contradicting their interpretation of Islam. They set about destroying important cultural icons, including 15th-century mausoleums of Sufi Muslim saints. Librarians feared the city's prized medieval collections of manuscripts would be next.

Librarian Abdel Kader Haidara organized and oversaw a secret plot to smuggle 350,000 medieval manuscripts out of Timbuktu. Joshua Hammer chronicled Haidara's story in the book The Bad-Ass Librarians of Timbuktu. Hammer spoke with NPR's Michel Martin about how a librarian became an "operator."

Why these manuscripts were so important

These volumes — and we're talking hundreds of thousands of them — at the point at which al-Qaida invaded Timbuktu, there were something like 370,000 manuscripts amassed in libraries in Timbuktu. And they portrayed Islam as practiced in this corner of the world as a blend of the secular and the religious — or they showed that the two could coexist beautifully. And they did in this city.

So it was tremendously important for Haidara and those who supported him to protect and preserve these manuscripts as evidence of both Mali's former greatness and the tolerance that that form of Islam encouraged.

Abdel Kader Haidara was a son of a scholar and he grew up in an intellectual environment in Timbuktu. He was not a wealthy person. After his father's death in the early 1980s he inherited the family's centuries-old manuscript collection.

So in 1984 the head of the Ahmed Baba Institute, the government-owned library in Timbuktu, called on Haidara and said, "Hey, we're having trouble getting off the ground, we need to find manuscripts. We know they're out there, they're hidden away in the desert, in river towns. Can you undertake this job of traveling around northern Mali, tracking down these manuscripts that have been lost — buried, disappeared — over generations? Gather them up, we'll give you money. And we want this library to be splendid. We want this to be something that people from all around the world will come to visit. So go out, do your best, find books for us."

He was reluctant at first, but the call of duty and the curator's constant pressure prevailed. And in 1984 he began this what turned into a 12-year really amazing quest to ferret out these manuscripts all across Mali.

In 2011, the Arab Spring breaks out. Gadhafi's downfall, the arsenals of Libya — in the chaos of Gadhafi's murder and the disintegration of the Libyan state — are opened for the taking. Then you've got these various rebel groups in Mali. You've got Islamic radicals all descending on Libya — on these arsenals. Walking in, loading up their pickup trucks with heavy weaponry, driving through the dust across the desert back to Mali. And so these heavily armed rebels sweep across the desert and in three months have captured two-thirds of the country.

Why he decided to do what he did

The first thing that Abdel Kader was worried about, frankly, was looting. In the first few days after the rebels took over Timbuktu and the army and the police had fled, there was total disorder. That's when he kind of began to scheme — "Hey, the great treasures of Timbuktu are being held in these very ostentatious libraries." He said, "These are going to be targets."

The looting subsided pretty quickly. But as it subsided, you had this growing radicalism, you had Islamic police roaring through the streets, stopping people, throwing them in jail, grabbing cigarettes out of their mouths, whipping them in public. He just foresaw that this was going to get worse, and that the manuscripts, which as we already said expressed values that were anathema to fundamentalist Islam — to Wahhabi Islam — were in danger. That sooner or later, these manuscripts are going to be held hostage. They're going to become political tools, they could be destroyed in an act of vengeance, caught up in military action. We've got to protect them.

So that's when Abdel Kader and a small group of his supporters, friends, relatives got together and began what ended up being a three-stage effort to protect, and essentially smuggle to safety, all of these manuscripts.

Let's remember that Abdel Kader was more than a librarian, this guy had spent 12 years as a badass explorer, as an adventurer. He was traveling on camels across the Sahara, on riverboats, going to small villages, finding these manuscripts. So he was an operator. So when the time came, he just knew what to do.

He said, "The first thing we're going to do is get them out of these big libraries. We're going to take trunks, we're going to pack them into trunks at night when the rebels are asleep. And then we're going to move them in the dead of night by mule cart to these various houses — safe houses, scattered around the city. We're going to stick them in there and hopefully they'll be safe for the duration of this occupation." Which of course, nobody knew when that was going to end.

One of the things that I think is important to draw from it is to realize that there is this whole strain of Islam that is moderate, that celebrates intellectuality, that celebrates culture, that celebrates diversity, secular ideas, poetry, love, human beauty. I think that is lost in this debate that's going on. We tend to really kind of turn against Islam because of the actions of this particularly violent group.

But I think in fact that the Islam represented by those in Timbuktu and the badass librarians is in fact more representative of what Islam is. And these people [who] were the real victims of extremism in this part of the world are fellow Muslims. They were the ones who really suffered. They were the ones who had their hands and feet chopped off, who had to live through the horror of daily occupation.

For the most part, we see this from afar, but these people are on the front lines and they are living through the horror of radicalism every day and every minute.

Where the manuscripts are now

He hopes that he'll be able to return them to Timbuktu. They are in about a dozen climate-controlled storage rooms in Bamako, the capital of Mali. And as far as moving them back, he's waiting. I mean, these are very hard people to root out. But Timbuktu is a ghost town — tourists aren't going there, flights aren't going there. It's very sad. And I don't know and he doesn't know if those glory days can ever be recaptured, given the strength of the Islamists — the terrorists in that area, in that part of the world.